That was how Nikolaus Eigner, the 23-year old student of Politics and Communication Studies at the University of Vienna, described his victory over nearly 1,000 other players two weekends ago at Grand Prix–Vienna. 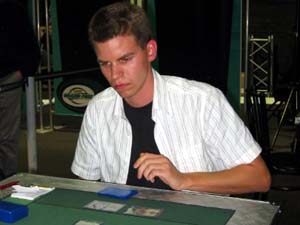 "Its amazing! It was already a dream coming true to finish Top 8 and qualifying for another PT," Eigner said. "But winning the whole thing? Unbelievable!"

In addition to winning $2,400, Eigner also qualified for the Pro Tour for the second time in his career. He started playing shortly after the release of Stronghold and his first tournament was Grand Prix–Vienna during the 1998-99 season (when Kai Budde was on his remarkable Grand Prix tear). Refreshingly, Eigner was eager to take advantage of his invite and was looking to follow up an impressive debut at Pro Tour–Amsterdam.

"Yes I will attend Nagoya. My goal is to finish better than my 46th place at my first PT in Amsterdam. I will do countless practice drafts on MTGO," he added.

Eigner also has a thriving real-life Magic scene in his local area to rely upon for practice.

"Vienna is the hot spot of Magic in Austria with its huge new store MAGICCORNER," Eigner said. "There are lots of players with PT-experience such as Benedikt Klauser, Thomas Preyer, and Stefan Jedlicka. There are also Magic scenes in other cities like Salzburg, Linz, Graz and Klagenfurt."

Eigner only had two byes coming into the tournament, and even with two rounds of lounging around he had to play through seven rounds on Day One -- and could not afford to lose more than two of those rounds if he wanted to advance to the Rochester Draft portion of the event. Here is the deck that he settled on.

1 Befoul 1 Distress 1 Counsel of the Soratami

Eigner knew immediately upon looking at his card pool that he would be splashing his red removal spells even if he did not know what his main colors were going to be. "It was really hard to build this sealed deck. All the colors were playable with rather equal power level. I decided red to be my splash color long before I decided about the rest. Finally I chose Black-Blue because this combination provided a very nice mana curve and many evasion creatures."

When Champions of Kamigawa was first released there was some trepidation among the Limited specialists of the world that the format would be dominated by legendary rares. While the rares do rear their heads, Eigner reiterated what many of the players from Grand Prix–Austin told me -- the format is not about the rares.

"Taking a good look at your mana curve is essential," Eigner said. "A deck loaded with bombs is useless without early drops, because you will very often be already too far behind when you come to cast them."

In fact, his deck's MVP was a two-mana common, "My personal hero in the Swiss was Nezumi Cutthroat. Coming out early it won almost every game against non-black mages."

In the first draft on Day Two, Eigner crafted a red-black deck with abundant spirits and two copies of Devouring Greed. He also had one of the most hyped rares in the set -- Kumano, Master Yamabushi.

Despite the comparisons to Masticore, the red legend was not the most important card in his deck.

"Sorry Master Kumano, but talking about wins, Devouring Greed easily outraced you," he joked. "There were only two black drafters at the table, a fact that allowed me to draft an extremely powerful deck that went 6-0 games, regardless of four mulligans and some early discarding."

While Devouring Greed's stock has been on a steady rise for the past two weeks, it came into that weekend with a relatively low profile, which helped Eigner during the draft. "I got the first one really late. The second one I picked very high since I already had drafted lots of spirits. I didn't have a specific draft strategy, except that I wanted to have either red or black cards in my deck."

With an 11-1 record going into the second draft he needed only one win and two intentional draws to make it to the final draft table and the Top 8. All of his practice at MAGICCORNER paid off at the Top 8 draft as he managed to get the black he was looking for again.

"Drafting a lot in our local store before the GP, we realized how powerful Devouring Greed can be in the right deck. I guess most players really underestimated it. I was on position 7 and got wheeled 2 playable green cards in the first booster. Green proved to be a good choice in the following packs. Rene Kraft to my left was in white-red and the other German to my right picked some mediocre black cards and blue. I definitely wanted to draft either red or black. Since black is deeper I decided to go green-black. A late Devouring Greed also helped… Since my friend Stefan Jedlicka on seat 5 picked a Befoul first in his first booster, my right neighbor was forced out of black and my deck got pretty solid."

They say that you need to get a little bit lucky to win any tournament. The trick is being good enough to put yourself in a position to take advantage of it. After two days of tight play, Eigner found himself in seemingly hopeless situations twice during the Top 8. The first was in the quarterfinals against Daniele Canavesi.

"I honestly didn't expect to win the quarterfinal since my opponent had a very good black-white deck featuring Eight-and-a-Half-Tails and Hideous Laughter," Eigner recalled. "To make the odds even worse for me, he had two spirit tappers (Kitsune Diviners) and two pro-spirit/pro-arcane guys (Kitsune Riftwalkers) and my creatures were 80 percent spirits. He was screwed once, flooded the other time…"

He dropped a game in the semis to Sasha Zorc but overwhelmed him with creatures in the next two games to force a final showdown with Antoine Ruel. They had a close game one, with the French player squeaking out the victory with only one point of life left. In the next game, Eigner needed his second bit of luck to keep his tournament alive.

"In game two, he [Ruel] gained complete control over the board with a life total of five," Eigner said. "I only had the green Zubera and a Feral Deceiver with Mystic Restraints on it. The turn before I would have died, I drew Devouring Greed...six to your head."

"The topdeck of my lifetime!"

Eigner took the third game with a Serpent-Skinned Kodama of the South Tree and fulfilled a prediction he had made earlier to a friend.

Eigner had two goals for himself this year as far as Magic is concerned. "My first goal was to qualify for a PT -- well, mission accomplished. The other goal is Worlds qualification."

With a short but impressive resume that includes a GP Top 16, Pro Tour Top 64, and a Grand Prix title it seems likely that he will accomplish that goal as well.

Next week is going to be very exciting at magicthegathering.com -- we'll get to see literally hundreds of Champs decklists. In years past, the tournament organizers of the various Champs tournaments would fax or email their Top 8 decklists to Wizards of the Coast and then the information would have to be entered and compiled by hand -- a process which could exceed the patience of a Magic community clamoring for a thorough examination of the new Standard metagame with Champions of Kamigawa cards included. 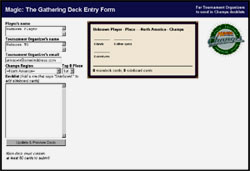 This year deck lists are going to be handled in a new way that should provide more decklists than ever before, sooner than ever before. Each tournament organizer will be entering their Top 8 decklists directly via the Internet using the Magic: The Gathering Deck Builder, greatly speeding up the process of posting the decklists online for the public to see.

Uber-coder Doug Beyer was the man responsible for developing the deck submission interface. "Basically the main motivations for the deck submission tool were (1) quicker turnaround, (2) greater accuracy of the decklists, and (3) greater ease of creating downloadable MTGO versions of all the decks. If the tool is a success in helping us do those things for States, I think you'll see it in use again for future events."

Doug's co-conspirator was magicthegathering.com Tournament Center overlord Greg Collins. He outlined how the system will work, as well as the sheer volume of decks that should be available this week.

"We'll start posting decklists Monday, Oct. 25 and add to the lists during the week as we get updates from the TOs," Collins said. "If every state/province/territory/island/city/county/prefecture submits a complete Top 8 (there are more than 150, including the United Kingdom and Japan), we're looking at more than 1,200 decklists. We're confident we'll get decks up faster and more accurately than we have before, but even with the new tool, some patience might be in order before we get all the decks up.

"Each deck will be matched with a Magic Online file, so that you can download the deck directly. With Champions of Kamigawa hitting the online shelves on Oct. 25, this will be a great way for people to get ready-to-play decks that have already been tested in tournament play."

For the most part we only feature the Top 8 results from North American events. That does not mean that we will not feature other events if the results are sent to me. German Judge extraordinaire Justus Roennau keeps me apprised of the Magic goings-on in his neck of the woods. This weekend was the first PTQ for Nagoya in Germany, and the Top 8 looked like such with Dirk Hein and Dennis Johannsen taking home a slot apiece.

As for the North American results:

This week's firestarter tackles the upcoming State/Province/ Territory/Island Championships. It is a multi-part topic, so pay attention.

Just click on the Discuss button below and you can post your replies in the forums. Mike Flores did an excellent assessment of the anticipated decks Wednesday. I really hope to hear from you, both before and after Saturday's events. And if you are not going to play, don't be shy -- tell us why you aren't playing and what you think the best decks will be.