coming weeks are going to be a flurry of Magic happenings. This weekend marks the introduction of not only the Ninja creature type in Betrayers of Kamigawa. It is also the official start of the race to be the one millionth person to make a Mutant Ninja Turtle joke about Mistform Ultimus. A winner is expected to be announced by Sunday.

The following weekend will see the second event of the 2005 Pro Tour season take place in Nagoya, Japan. Not only will the Player of the Year and Rookie of the Year races start to shake out, but there may even be an exciting announcement or two to come out of Japan.

This past week was pretty quiet, with no high-profile events to report, follow up on, or analyze. It was the final weekend of the Team Sealed Qualifiers for Pro Tour Atlanta. The last qualifiers are listed below.

Did I say last? There are actually a few options left for players trying to reach “the show” in Atlanta. There will be sanctioned team events at all of the North American Prereleases this weekend. I don't know whether or not it is the same in other parts of the world, but in any case, this is a great opportunity for teams on the bubble of the 1750 ratings plateau to get those elusive final points. The events are run at a value of 8K so you probably can't garner more than 10-15 points with a perfect weekend -- but if your team is within that range, then it behooves you to attend.

Of course, if you are not close enough to be within a Prerelease's shooting distance, you can always attend the Last Chance Qualifier that will be held in Atlanta the day before the Pro Tour. Two teams will qualify, and the event will be run in an identical fashion to the PTQs -- although there probably won't be a Rochester Draft, as the Top 2 teams will simply be qualified to play the next day.

I wrote last weekend about the travels and exploits of Dar Fluggen Taggen (Adam Carrasco, Nathan Huffnagle, Seth Vulatic), the team that went to a PTQ in Philadelphia on Saturday only to lose in the final. They attended another PTQ on Sunday, this time in Maryland, and emerged with the invite to Atlanta.

I heard back from Carrasco, who admitted to me that his team had to travel less than 2 hours to each site. This marked the first Pro Tour invitation for all three team members, who collectively call Harrisburg, Pa., home. After losing in the Draft portion of the Saturday event, they tried to remain optimistic about Sunday with varying levels of success.

“We've been a team for a little under two months but we've known each other for years,” explained Carrasco. “We play together regularly at the Adventurer's Guild and in the food court of the Capital City Mall three nights a week. We had always planned to go to both days, barring a qualification in Philly. After getting second in Philly we told ourselves we were going to do better, we weren't sure if we actually would, but apparently we did."

“Sunday our card pool stunk," Carrasco said. "We were missing key cards needed to build decks -- Glacial Ray, Devouring Greed and Rage, Befoul, and Pull Under. Honestly, after seeing our pool I thought we'd go like 1-2 drop. On the bright side we each had a bomb, Jugan, Kumano, Keiga. The decks being Black-Green, Red-Black, and White-Blue.”

The team faced their toughest challenge of the weekend in the Top 4 Sunday when the squared off against a team led by Morgan Douglass -- one of the tougher players you can ever face at a PTQ on the East Coast. Hoping to avoid a repeat of Saturday (where they lost once the format turned to Rochester draft), Carrasco and company worked out an equitable prize split and found themselves scheduling a road trip to Atlanta in March.

The trio are no strangers to road trips, as they have driven up and down the East Coast in dogged pursuit of their first Pro Tour invite.

“We do a lot of traveling for Grand Prix, some of us have been to Austin, Chicago, Orlando, Detroit, New Jersey, and D.C. to name a few," Carrasco said. "We have, however, gone as far as New York and Cleveland for PTQs. We will all be attending both Boston and Detroit in the coming months.”

Carrasco, who was speaking for his team, was still flying high late in the week after the event. “It was just a great weekend of Magic. God I love this game!”

Olivier Ruel is living the Magic high life in Japan the past couple of weeks. He and Bernardo Da Costa Cabral headed to Japan to team with Kazou Katai for the Grand Prix earlier this month. The two of them have been visiting with friends, traveling around the country, and having the time of their lives. Antoine Ruel, who did not attend the Grand Prix, is scheduled to get there this week in time for all three of them to play at one of the Betrayers of Kamigawa prereleases in Japan. 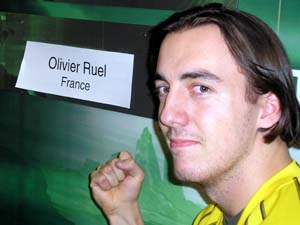 Olivier Ruel said he's been 'abnormally lucky' this season.His travels interfered with his e-mail access and he was not able to get me the responses to my Class of Columbus questions in time to be included in last week's column -- the only member of that Top 8 not to be included. He sent in his answers anyway, with one in particular that warranted retelling.

Olivier, the player that many of his Top 8 classmates picked to win the Player of the Year title, revealed that he was not originally going to play his Goblin deck and had a different deck in mind when he landed in Columbus.

“I believed in Rock for very long -- until the day before the PT actually," he wrote. "Then I realized it was pretty bad in the metagame and there were not many decks I liked in the format. On Thursday evening, still undecided, I went to Yann Hamon's room to pick up cards for Alex Peset. We talked a little and Yann told me Goblins was a very good deck and that I should probably play it. We talked about the deck during dinner and I went back to my hotel and I played few games against White Weenie. I basically learned the deck during the first round.”

While Ruel was the name that came up most frequently when the rest of the Top 8 was polled to see who they expected to win Player of the Year, Ruel did not follow suit.

“The year started pretty well for me but I got abnormally lucky. I just hope I can finish Top 5 and qualify for the Invitational. I think Oiso would make a pretty nice pick for Player of the Year. He's probably the most regular player on earth right now.”

Look for a video followup on Olivier's adventures in Japan during the coverage for Nagoya.

While the Extended PTQ season does not start for two weeks, there has been plenty of Extended action as organizers have been holding Grand Prix Trials for Boston, as well as other tournaments, to meet the player demand for Extended action.

This past weekend saw an Extended Grand Prix Trial in Delaware, Ohio that was organized by Mike Guptil and Professional Event Services. Many pundits have expected the format to shake down to a smaller concentration of decks from the wide ranging Columbus Top 8 field. The results from Delaware don't support that claim, as there were eight different decks to emerge from the 27-person field. It may shake out a little more after Grand Prix–Boston, but for the moment the impending PTQ season looks like it is going to be a wide-open field.

Big thanks to Professional Event Services for the decklists.

4 Living Wish 2 Call of the Herd 2 Plow Under

Firestarter: As the Storm Crow Flies

Adam Carrasco, Nathan Huffnagle, and Seth Vulatic have traveled up and down the East Coast in pursuit of a Pro Tour invitation. Olivier Ruel and Bernardo Da Costa Cabral flew to Japan to play in a Grand Prix. I know of at least one player who was contemplating a flight to Nagoya to try his hand at the Last Chance Qualifier.

How far is too far? How far will you travel to play in a PTQ? A Prerelease? Grand Prix? Friday Night Magic? Use the ‘discuss' button below to travel to the forums and let us know.