The Lowdown on Legacy

ended last week's column segment about French Nationals with a link to the Worlds page. If you haven't already checked out the information page, you might be in for a big surprise. Sure, Two-Headed Giant and the move from three-person teams to four is big news but not as big as the announcement that Underground Sea will be legal for play at this year's World Championships.

Note that I did not say Underground River, which was re-released in Tenth Edition this weekend, but the original from which it was inspired. That's right...the spot that was traditionally occupied by either Block Constructed or Extended has been handed over to Legacy. Are you shocked? I know I was and I took R&D head Aaron Forsythe and Organized Play Manager Scott Larabee out for breakfast last week when I was in Seattle, to find out what the heck made this happen.

"It was something—believe me—that we have talked about a lot over the last year," laughed Scott. "We have been discussing it since last year's Invitation policy."

The problem that the policy makers were facing was that Worlds, which was scheduled to have Block as the second Constructed format this year, is happening before the Lorwyn block is two sets old.

"One set Block Constructed?" shrugged Aaron at that option. "Lorwyn was neither built nor tested to handle Constructed with only one set released."

"So we went through our options for the second Constructed format," said Scott, picking up the narrative. "The previous Pro Tour in Valencia will be Extended and even though Lorwyn is coming in and should have an impact, having another Extended event would have felt like a rehash."

"Our fourth option was more Standard," said Scott before adding with a laugh, "No, Stephen Menendian, Vintage did not come up."

I asked about the fifth option of a Finkel-friendly two days of draft, with only one day of Constructed but Aaron explained why that is not likely to happen any time soon: "It came up quickly as a possibility but was dismissed. So much of our audience tunes into our site for the latest Constructed decks."

The reasoning was even deeper than the immediate event at hand though, as the release of the first set in the next block after Lorwyn—codenamed Rock—will trigger a massive Extended rotation that will take the Invasion, Odyssey, and Onslaught blocks off the 1.X playlist. There won't be any cards left in Extended that utilize the game's original card frame (other than "timeshifted" cards).

"Wanna feel old?" teased Scott. "In October 2008 the oldest set in Extended will be Mirrodin."

"There are just tons of popular cards and decks from those blocks that people like playing that will no longer have a home in competitive Magic," said Aaron, steering the conversation back on course and getting down to the heart of why Legacy . "So it is time to give Legacy a real try for many of the same reasons Extended was invented and added to the competitive Magic landscape in the fist place."

Extended is now an accepted thread in the fabric of organized play, but when it was first introduced it was met with some resistance out mostly due to worries about many of the same cards that will raise an eyebrow for players heading to Worlds (such as the so-called dual lands). Aaron assured me that Legacy—and its out-of-print cards are—is very much on the mind of R&D when they work on current sets. 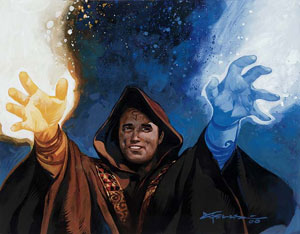 "We try to make cards like the fetch lands and Ravnica duals," said Aaron of the need for fewer duals in today's modern Legacy environment. "Not to mention new cards that are good against older strategies. Its amazing what cards like Meddling Mage, Pithing Needle, and Extirpate will allow you to fight against."

Scott was looking forward to a Constructed format for Worlds that is relatively unexplored compared to Magic Online-legal formats that have been worked over by the massive computing power of thousands upon thousands of online and PTQ players.

"There are some players who are going to be wary of this," Scott acknowledged. "But there are a larger number of players who will see this as an amazing spectacle."

Players heading to Worlds may wonder what is good in the current Legacy metagame after the banning of Flash in the wake of Grand Prix–Columbus, but they can rest assured that there will be a number of tournaments coming up that will not only give the metagame a chance to shake out, but for R&D to have another crack at the banning any cards that may have slipped under the radar due to the dazzling performance of Flash.

"Let's see what happens at the Legacy Championships at Gen Con," cautioned Aaron when I asked if there were any cards that needed to be addressed before Worlds. There will also be a number of open Legacy Championships held throughout the world, including one at last weekend's Australian Nationals. I will try to bring you the decklists from that event and as many of the 32 European countries running similar events over the coming months.

Both Scott and Aaron felt confident that the pro community would embrace the format and expected to see great things based on the turnout of the last three Legacy GPs.

"We were waiting for Columbus to see if this format was actually popular," Scott explained. "The pros showed some real aptitude for the format."

"This format is very much like 2HG Limited as far as the inability for it to be parsed on MTGO," said Aaron. "It leaves the door open for unknown strategies and strange card interactions."

As far as card availability, Scott did acknowledge that "getting cards might be tricky. But we hope that everyone who qualifies will have friends who are excited about them going to Worlds. Plus, don't forget we will be in New York City. Cards will be available. There will be four dealers in attendance and we will be situated less than a mile from Neutral Ground."

I am sure that most of you at home reading this are not currently qualified for Worlds and are much more concerned about whether or not you need to be worried about this for the upcoming Pro Tour season.

"There has certainly been some discussion but there are no plans to run Legacy PTQs in 2008," assured Scott but added: "We haven't finalized 2009 yet. Someday...maybe..."

This past weekend saw National Championships take place in Australia and Italy. It was the first time that Ninth Edition cards like Kird Ape, Persecute, and Volcanic Hammer had to sit on the sidelines while Tenth Edition sent Mogg Fanatic, Agonizing Memories, and Incinerate into the Standard rotation.

According to Ray "blisterguy" Walkinshaw, the most common decks played in Canberra City looked to be Gruul and Angelfire decks—both of which were represented in the Top 8. There were a couple of more exciting decks that not make the Top 8 including a deck that was ported over from Extended with the reprinting of a particular red enchantment.

"There were a few Seismic Assault/Life from the Loam decks and a couple of Perilous Storm decks as well," said blisterguy of the more interesting decks he saw on the weekend. "And way more black-based Aggro discard decks than I would have expected."

Korlash Control was also one of the most widely played archetypes in the field but was surprisingly absent come the elimination rounds.

"We got a black-based control deck in the Top 8 but he wasn't playing Korlash," blisterguy elaborated. "It seems that maybe trying to build your deck around Korlash—as awesome as he is—isn't nearly as effective as just building a control deck with control cards."

If asked to pick an early Most Valuable Card from Tenth Edition, blisterguy knew exactly which card he would pick immediately: "Incinerate seems to take the cake. Simple but effective."

Last year's champion, Tim He, returned to the National team for the third time (he was also the National Champ in 2004 and finished 24th at Worlds), but was displaced from the captaincy by Steve Aplin. Steve was last seen making the Top 8 of Grand Prix–Sydney where he revealed almost nothing about himself in his player profile. Craig Chapman has not posted any premier event finishes but apparently he's very active on the Australian message boards. James Zhang is perhaps the most accomplished of the team members with wins at the last two Australian Grand Prix events. All in all, a very solid team that the New Zealand-based blisterguy was nervous about when it came down to the national rivalry.

"It's a much stronger team than they have fielded in the past," said Ray. "James Zhang
and Tim He are excellent players with a great deal of experience who will do them very well. Steven Aplin sure seems to know his way around the table and Craig Chapman is certainly no slouch either. As far as how they'll do against the New Zealanders? Last year they finished ahead of us, mostly on the back of He's performance, but every other year we've finished ahead of them—I think. This year it doesn't look so good for us, but I guess it all depends who makes it into the team in three weeks' time. I know I'm hoping to make it!"

It was a neck-and-neck race throughout for the European spot at the 2007 Magic Invitational, but a late surge by Portugal's Tiago Chan landed him a seat on the train from Valencia to Essen, narrowly edging Olivier Ruel by one percentage point.

This week the Latin American ballot is up and all three members of the second-place team from Charleston, a former World Champion, and a lonely Chilean are hoping you will vote them into the festivities at Spiel. Head to the Invitational page now to read of their accomplishments and cast your ballot.

By the time this goes live, Great Britain's Nationals will be getting started, with the United States hot on its heels. With one week since the Australian Nationals decklists—not to mention the Kentucky Open decks—were posted, how will the format shake out? What are you expecting to see come the Top 8 of these two major tournaments? Head to the forums and share your predictions. Then stay tuned to the Tournament Center all weekend long for in-depth updates from Baltimore and Birmingham.