Magic Dossier for a Berserker

This was an article I was very nervous about writing as it is waaaaay outside my comfort zone—at least as far as my Magic writing goes. I am much more comfortable interviewing players, speculating about the Player of the Year race, and talking about the happenings at the top tables of high level Magic events than I am "speaking" in the voice of one of the the then-Standard-defining cards. I felt at the time that the much-maligned Bloodbraid Elf was quietly holding back the tide of planeswalkers in Standard and I got this idea of a divaesque Bloodbraid Elf saying, "You will miss me when I am gone." I think it turned out quite nicely and it stands out from my 2010 columns as my favorite piece of the year.

A cascade all-star dishes on Standard, Extended, and a rivalry with Jace. 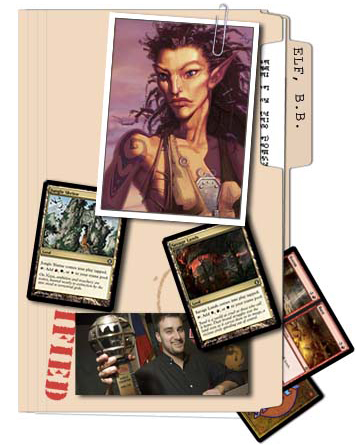 Job Title and Duties: Officially I am an Elf Berserker, but I hate being raptor-holed by the Berserker title. Sure, I like attacking as much as the next elf, but there is much more to my job than that. Duties include making players discard two cards, attacking for 3, "summoning" Woolly Thoctar and Sprouting Thrinax, and getting a Maelstrom Pulse on. It is a lot to keep straight, and sometimes it doesn't work exactly the way it is supposed to, but I do my best.

Perhaps the most overlooked part of my job is killing Planeswalkers. I don't care if Jace—and whatever Jace, the Mind Sculptor he has for himself these days—goes straight up to five loyalty. One Blightning and a hasty attack is almost always enough to keep that control freak from taking over. He gets me so angry. I don't even know what is going to happen soon. I am approaching mandatory retirement while his contract keeps getting picked up every year. All I know is, this elf berserker is going to playing on the senior tour while Jace is going to be sticking his smug nose into the top of everyone's deck and cozying up to the new team coming in. I heard he has been playing golf with Kozilek and some of his cronies. Whatever.

Magic playing accomplishments: It is really hard for me to answer this question without sounding like a certain arrogant blue Planeswalker—who has not actually won anything, I might add. But why shouldn't I be proud? I mean what haven't I done at this point? I have taken down more Friday Night Magics than I can possibly count, dominated Pro Tour play, won a World Championship, and have you seen any of the results from $5Ks lately?

My breakout weekend was in Honolulu last year, although I think I got a little lost in the hype for Team Cascade. I appreciate what Enlisted Wurm did at that tournament but let's be honest—does anyone even talk about him anymore? I especially liked the strategy that Jim Davis came up with for that event. He drew first (almost) every game in the mirror match-up and came out with the best record in Constructed. Not bad for an Elf Beserker playing in the show for the first time.

I was a little sour about not getting a shot in Austin. I know it was Extended but I have a lot to offer in that field. That was okay though as I had an amazing World Championships.

It was pretty much all me in the Finals. I kept getting texts from both sides throughout the event. The Savage Lands crowd has had plenty to cheer about lately, so it was pretty gratifying to see the celebrations at Jungle Shrine after Andre Coimbra hoisted the trophy. This is despite the fact that Andre had some bias against tapped lands and did not actually visit the Jungle Shrine. It could not have worked out better for my old pal Woolly Thoctar. He deserved to get a big win before they hand him the Standard retirement package later this year.

I got this season—my farewell tour, if you will—off to a rousing start with two decks in the finals of Pro Tour–San Diego. It was all Savage Lands this time. Both Simon Görtzen and Kyle Boggemes are the kind of managers I like to work with. Those guys are all business.

It was the second time I had worked with Kyle. He may be young but he has some great ideas and his vision really showed everyone that I could continue to be viable once I retire from the Standard scene. Just a couple of weeks before San Diego, Kyle won an Extended Pro Tour Qualifier where I got to stretch myself and do things like turn all the nonbasic lands into Mountains or even blow up all the lands. I remember when I was kid listening to that old codger Erhnam Djinn talking about working with Armageddon. I also remember thinking that took two turns and 8 mana. I guess he also had to walk uphill to the School of the Unseen without sleeves while paying cumulative upkeep on his Snowfall.

I know I am going on a little bit here but in case you missed it I won another $5K this past weekend—and I had it locked up by the time the Semifinals were done again. Payman Ghorbani beat out 289 other players in the 2010 TCGplayer.com $5k Series in Los Angeles this Saturday. Jund took six of the Top 8 spots in this event. I don't want to claim all the credit, but ....

1 Master of the Wild Hunt
75 Cards

Favorite part of your job: I don't know if there is any better feeling than flipping a Blightning to kill Jace. Have I mentioned how much you are going to miss me when I am gone? Mostly I just like hitting the right card at the right time, be it a Woolly Thoctar, Sprouting Thrinax, or a Boom—I would really like to work with more split cards in the future. I also really like winning. I have gotten kind of used to it over the past two seasons.

Least favorite part of your job: Flipping a Rampant Growth. Who am I, Wood Elves?

In your spare time: I have been so busy the last two seasons I have barely has any time to do anything besides win tournaments. I am looking forward to some spare time later this year. My trophies need polishing, and I really need to catch up on episodes of Lost before the finale. Avoiding all the online spoilers has really cut down on my ability to browse the web, and I had to stop following Mike Flores and Dave Williams on Twitter. I would also like to read more. Happy for any suggestions anyone out there might have.

Favorite Magic cards: Savage Lands, Jungle Shrine, Sprouting Thrinax, Blightning, Boom, Terminate, Maelstrom Pulse, Lightning Bolt, Path to Exile, Naya Charm—pretty much anything that costs three or less. Of course, my favorite is the snazzy new version of moi that you can get at Friday Night Magic throughout April. Check it out: 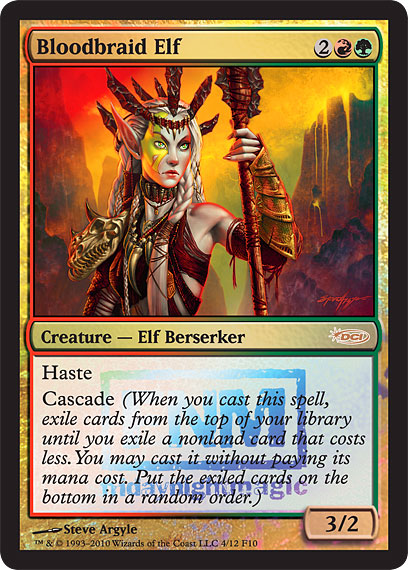 What Would Kenji Do, Part Two

In yesterday's Top Decks, Mike wrote about Kenji Tsumura's control deck from last weekend's Grand Prix–Yokohama. Other than mana artifacts and lands, the main deck featured no permanents that were not planeswalkers. And what a set of planeswalkers they were, ranging from Jace, the Mind Sculptor, to Sorin Markov, and up to Nicol Bolas, Planeswalker himself. Kenji made Day Two with the crazy-looking control deck—largely on the back of Night of Souls' Betrayal—but his performance was notable for two things.

The first was not just Kenji's presence itself, as he has been known to play in Japanese events since his "retirement," but the promise of future appearances. You may recall that despite qualifying for Worlds last season at Japanese Nationals he did not show up in Rome to play. In Yokohama, Kenji explained to coverage reporter Josh Bennett that he had been working extremely hard at a pre-university prep school which had left him no time for competitive Magic in the past year. Kenji has been accepted into a university and expects his schedule to become much more manageable in the immediate future. While he will not be attending Pro Tour–San Juan, Kenji told Josh that he would be trying very hard to qualify for Pro Tour–Amsterdam and would be attending all the major Japanese events. Perhaps the most exciting words uttered at the Grand Prix was Kenji's promise to Josh at the end of the deck tech on Kenji Control.

He told his fans not to worry and vowed, "I'll be back!"

You may recall a story I have told about running into Kenji at the airport en route from Grand Prix–Montreal to Pro Tour–San Diego back in 2007. A distraught Kenji told me that he was only able to stop four of his five opponents from forgetting to pay for a Pact at the Grand Prix. While many players would happily take a free win from their opponent not taking the pains to remind themselves of the potentially fatal upkeep cost, that is not how Kenji is wired. Flash forward to last weekend's event, with Kenji playing in Game 3 of the last round of Day One—the winner of the match would advance, and the loser would be heading to the public events queue on Sunday.

Time was running out, and the judge was poised at the microphone to announce that five extra turns were all that remained for Day One. Kenji's opponent cast a Pact, and the former Player of the Year took the time to rummage around in his bag, find a die, and place it on his opponent's deck so that he would not draw a card without remembering to pay the toll on the Pact. Kenji then proceeded to cast Cruel Ultimatum on every turn remaining in the tournament and advanced to Day Two.

I can't wait until Amsterdam!