or almost as long as I have been playing Magic I have had a star-crossed love affair with animating the dead. I have always loved the idea of using other zones beside your hand and library as a source of cards and what better zone to go looking for bodies than a graveyard?

Animate Dead was one of the first spells that caught my attention—over the likes of Ancestral Recall and Mox Pearl—in that very first Unlimited starter deck that I bought. I just wanted to kill my opponent's creatures and bring them back under my control. I remember hoping against hope that I would find a fourth Forest in my multicolored pile of cards so I could gain control of a Force of Nature. Keep in mind that we were just playing with a pile of cards we owned at this point, so just taking 8 was not even a consideration. Shivan Dragon was the most feared creature in our playgroup and getting to not only kill an opposing Dragon but then reanimating it? It was living the dream.

By the time Dance of the Dead was printed, my original playgroup had not made the transition to more competitive Magic (although several of them still play casually to this day) and Ice Age Sealed Deck was one of the more popular formats at Neutral Ground among my new Magic circles. The popularity may have come from the fact that this was the first time we had access to a steady stream of Magic product and could play Sealed Deck every Friday night—and most other nights as well. Ice Age Sealed was not what you would call a tempo format, the board would often get bogged down and a lone flier or landwalker would be what the whole game boiled down to. I remember siding in Dance of the Dead just to bring back a 2/2 flier as a slightly improved version with a happily paid upkeep.

Hymn of Rebirth was another Ice Age card that was good at bringing back those elusive fliers in Sealed Deck. It was the first time I remember playing with this effect attached to a sorcery. It was still limited to... well... Limited for me, though. It was not until the next set was released that I started trying to reanimate in Constructed.

Probably my favorite from the early days of Magic was Miraculous Recovery, which was first printed in Visions. I still remember working with Dan Burdick on a Mirage/Visions Block Constructed deck that was flashing into play Man-o'-War and Nekrataal with a +1/+1 counter. The deck was fun but, needless to say, I did not find my way to the Top 8 of any of the Constructed PTQs that season. I picked up a copy of the Duel Decks: Heroes vs. Monsters primarily to get a sweet copy of this card for Commander purposes.

By the time Tempest came out, the most efficient reanimation spell of all time was printed. For just one mana—and some non-trivial amount of life—a player could get a creature in either graveyard. It quickly became a tournament staple and I remember seeing both Jon Finkel and Kai Budde playing it during Round 1 during an early foray into event coverage. Players had enough ways to get cards into their graveyards that they often had a selection of tools to reanimate—and a variety of options for bringing them back from the dead. Just look at this match coverage between the two future Hall of Famers.

Probably my favorite of all time was Unearth. It was often played with the likes of Hidden Horror, but I always loved pairing it with Yavimaya Elder after sacrificing the Elder to get two lands and draw a card—still a fine card-advantage engine in the Pauper format.

Like any good NecromCom there is a long montage sequence of creatures being brought back from the dead by a variety of instants, sorceries, and enhancements over the last decade. Beacon of Unrest, Makeshift Mannequin, the dreaded Dread Return, and the most recently Standard-dominant Unburial Rites.

So what does the most recent iteration of the card look like? 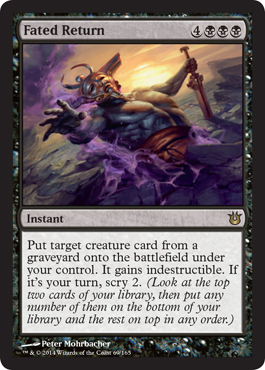 When I see a converted mana cost of seven I immediately look to the Commander format, and that is where I expect this card to truly shine. First of all, there are plenty of juicy targets in a multiplayer game, with powerful creatures being sent to the graveyard with any number of removal spells and board sweepers. I know it is a little pricey at seven mana, but look at all the upside built into it for that extra mana. First of all, you can play it at instant speed (although you get a sweet little bonus for playing it on your turn), which lets you set up to be able to untap and get in an attack with your indestructible monster.

It also means you can sneakily end up with an indestructible Eldrazi, should one go to any opponent's graveyard. You can allow the shuffle effect to go on the stack and then play Fated return in response. I would say that would be a final act that would be the perfect ending for this little necromantic comedy that started all the way back in the 90s.