Metalcrafting a Plan for Scars of Mirrodin

have spent the last week in the Wizards offices poring over photo contact sheets, rummaging through old deck lists, and assembling video tributes in my capacity as the Pro Tour Historian. A big part of that role is in service to the Pro Tour Hall of Fame and the induction ceremony for the incoming class at the World Championships. With only Worlds remaining on this year's Pro Tour schedule it makes sense that I would time my trip so that it takes place after that third PT event and the announcement of the incoming class. 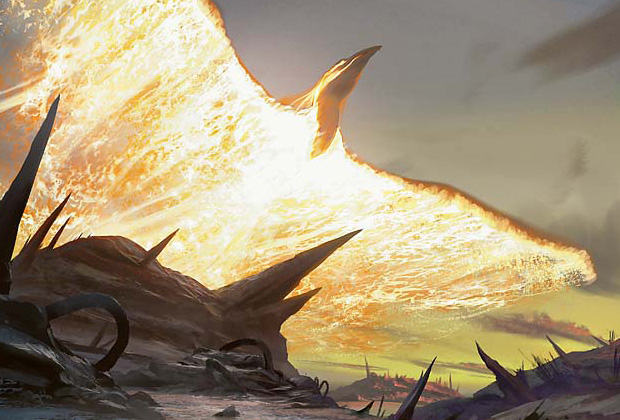 I got invited to a meeting earlier this week. When I got there I was looking at a table of seven Magic players, eight chairs, and twenty-four packs of Scars of Mirrodin. Pretty much the best case scenario for any Magic player invited to a "meeting"—not only were we drafting but I was the eighth player and we were all set to start.

Honestly, the fact that there was Scars of Mirrodin product on hand and the possibility of getting in a couple of advance drafts with the R&D guys had almost nothing to do with the timing of the trip out to Renton ...

You're not buying it? Yeah ... me neither. Especially when you consider how many of these trips over the past several years have overlapped with a chance to play with the newest Magic sets a couple of days before the actual Prerelease. A Pre-Prerelease, if you will, and I excitedly cracked into my first pack of Scars hoping for a card to give me some direction. I flipped past the front of the pack, images of equipment and green infect creatures flickered by as I hoped for something spicy lurking in the rare spot—preferably a something with loyalty counters on it.

The card in the back of the pack was red, but it was not Koth of the Hammer. Kuldotha Phoenix became the first ever card I would pick in Scars of Mirrodin Draft. I would likely consider this card if it went straight to italics after "Flying, haste" but the remainder of the rules text made this card a slam-dunk first pick—and gave me a clear path to follow with a heavy color commitment thanks to the triple red and a heavy artifact commitment with metalcraft. 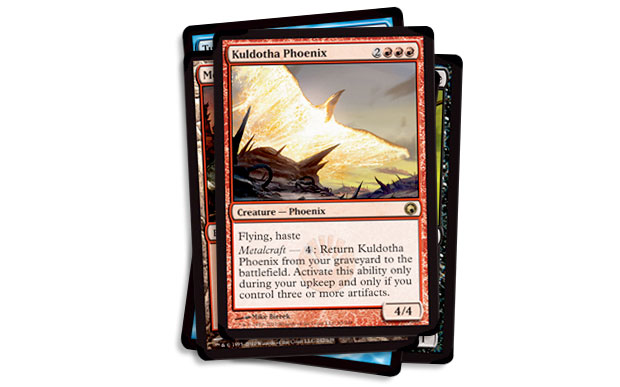 For my second pick I was reminded of the classic dilemma from the original Mirrodin Draft format. I had a choice between an excellent removal spell in Arc Trail and an Iron Myr. I really wanted to take the latter since it would feed both the appetites of my Phoenix, but I had to take the two-for-one removal spell. Besides, there would clearly be more Myr, right. Not with Hall of Famer Mike Turian feeding me. A big part of Mike's Hall of Fame resume was his two Limited Top 8s during the 2004 seasont—two Mirrodin Block Limited Pro Tours. This is a man who knew the value of a Myr (and of a Viridian Longbow for that matter).

I picked up Embersmith and Lumengrid Drake along with a couple of other blue cards. I remember getting a late Bonds of Quicksilver—and passing every green and white card I could possibly pass to Matt Tabak, in the hopes of getting paid back some blue and/or red in pack 2.

For pack 2 I started things off with Tumble Magnet. I was looking at a Lumengrid Drake and Shatter but was a little light on artifacts after pack 1 and I knew that I wanted to grab some proliferate cards if I had the chance. Rusted Relic was my second pick and it was a slam-dunk that it helped my metalcraft and gave me a formidable creature to beat down with along the way. In that theme I snagged a pair of Glint Hawk Idols and a Chrome Steed through that second pack. I rounded out the pack with Blade-Tribe Berserkers, Trigon of Rage, and a couple of Steady Progess.

Going into pack 3 I was a little light on creatures and still had zero Myr to smooth my mana. I would have taken any mana Myr with my first pick in pack 3 but there were none to be had—and I suspected none would be coming through Turian. Despite this I had to take Volition Reins, in all its

glory, out of that pack. Miraculously I was passed an Iron Myr second in that pack—and I have no idea what else was in there with it—and a Silver Myr two picks later. The deck rounded into shape nicely with another Trigon of Rage and a couple of other creatures.

Here is the deck I drafted in all its creature-light splendor:

I should have played Bonds of Quicksilver over either the Sky-Eel or the Silcaw since I was able to tap things down with the Magnet and Centarch. The Bonds would allow me to lock something down while the other two cards dealt with other threats. I also wanted to squeeze in a third Steady Progress but I could not make it fit despite it being awesome with Tumble Magnet.

Joe was clearly ready for my deck when his first three plays of Game 1 saw him Shattering my Glint Hawk Idols and Chrome Steed to leave my Rusted Relic immobile. I softened him up with Kuldotha Phoenix, which he promptly Arrested but eventually, with my Tumble Magnet keeping him down and my Trigon of Rage shortening his clock, the Relic came to life and took the game. Joe's deck seemed creature light in both games.

He had actual Glint Hawks that did not come down as early as he would have hoped. When they did come down in Game 2, thanks to a Myr, I saw just how good Arc Trail is going to be in this format. He also had Heavy Arbalest, which would have been a nightmare if I did not have the ability to tie up his mana by tapping the creatures when he tried to equip them.

Mark was playing a green-black infect deck, which is apparently his archetype of choice in this format. In Game 1 he scuffled for mana and did not come out of the gate very fast. I got a quick start and was able to tempo him with Arc Trail and Lumengrid Drake. In Game 2 things got very scary very fast. As I mentioned in my preview of Hand of the Praetors, poison was not traditionally a scary mechanic back in the proverbial day.

Mark led off the second game with Blight Mamba and followed up with another a turn later. He followed that up with Carrion Call and Tangle Angler. I was attacking in the air but he had me infected and clinging to life in very short order. I got as many as eight poison counters before I won the game in the air—thanks to bouncing the Tangle Angler and some well placed Tumble Magnets—but would have died on any turn that Mark drew an Untamed Might or even a Putrefax.

I don't recall the details of this match against Matt other than that I lost and Arrest and Dispense Justice was involved. The latter was also a factor in my match with Joe and it is a pretty significant card in the Limited format. I attacked Matt in a situation where he did not have metalcraft active and sent in more than one guy fully expecting some justice to be dispensed. My plan was to sacrifice the lesser of my two creatures. Instead Matt blocked my smaller creature, took damage from the larger one, and then at the end of the attack step cast Dispense Justice and forced me to sacrifice my remaining creature.

I did win one game against him with my Screeching Silcaw by decking him—not really my Plan A for the deck. The Silcaw was in my deck as either an early speed bump or an outlet for my Trigon of Rage. There is a high likelihood that I will attempt a Silcaw deck in some future draft, and I am seeking help for this problem soon.

Despite having twelve artifacts in my main deck I still wanted more and probably should have played Liquimetal Coating which is a two card "combo" with either the Steed or the Relic since you already have two artifacts at that point and can turn anything else you control into that crucial third one. Metalcraft feels like some sort of hybridization of affinity and threshold and just like both of those keywords you will sometimes find yourself playing Limited cards that you might not otherwise in order for your deck to do all the things you want it to do. Liquimetal Coating is a great enabler that will certainly see play in my Limited decks that have metalcraft but are a little light on the artifact count. 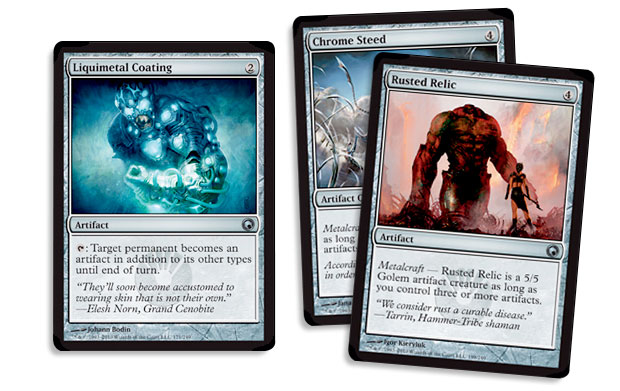 All in all I had a great time with the new set and can't wait to draft it again this weekend—or possibly even a little sooner. I am going to be headed North from here to attend the Regional Prerelease being organized by Alberta Premier Events. I will be building a Sealed Deck and gunslinging against players all day long. Winners will get a booster pack of Scars of Mirrodin for beating me. I will also have a Standard deck and an EDH deck with me, if you want to play another format. If you happen to be in the area make sure you stop by and say hello.

For everyone not in the area make sure you get out to your local or regional Prerelease if you want to get a jump on Scars of Mirrodin. You can find an event near you by going here. As always feel free to check back in the forums and share your stories from your local event.