hings have been moving forward quickly for the newly minted Modern format, which reaches back for tournament legal cards all the way to the original Mirrodin block and Eighth Edition. Players in the Magic Online Community Cup got the first crack at playing it—albeit with a different banned list and the Unified deck construction rules in effect—and community interest in the format quickly grew after that first look.

During the San Diego Comic Con Magic panel, Aaron Forsythe casually commented that Wizards was going to be moving forward with the Modern format in the near future, which set the Twitterverse ablaze. The "near future" will arrive, sooner than many expected, next weekend, when several hundred of the world's greatest Magic minds will come together at Pro Tour Philadelphia. With the announcement came a fairly extensive and preemptive banned list that meant that Caw-Blade, Valakut, traditional Affinity, Fairies, Hypergenesis, Dark Depths, and a handful of other known archetypes would not be easy layups for PT participants.

Reactions were, as always, mixed, with many players very excited about the change—Frank Karsten among them. In fact, the Hall of Famer was not planning on attending the Pro Tour at all due to disinterest in the well-explored Extended format. He announced on his Facebook page:

I wasn't originally planning on attending Pro Tour Philadelphia, but the new format exites me. Aiming to break the format, I just booked a flight! Philly, here I come!

I have been in the Wizards offices all week doing Hall of Fame research, and I stumbled across an old picture of Frank that I posted on his Facebook wall. 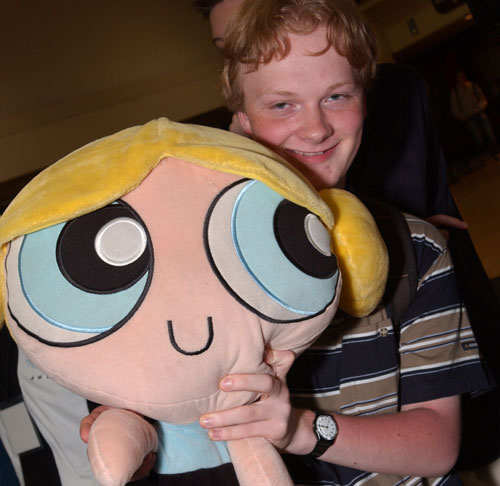 I also asked Frank how playtesting for the new format was coming. To give you an idea of some of the crazy interactions that are possible with this card pool, I present to you his response—but keep in mind that Frank is also going to be playing the "War of Attrition" event deck at Nationals this weekend, so you might not want to try this at home:

Bubbles used to be our lucky team mascot :)

As for Philly, I've been discarding Emrakul to Lightning Axe, followed by Goryo's Vengeance in response to Emrakul's shuffle trigger ... this format surely is exiting!

I actually had an opportunity two weeks ago, just a few days after the announcement was made, to play in an unsanctioned Modern event at the TCGPlayer.com Championship in Chicago. You may have seen the Top 16 deck lists posted, which included my mash-up of Red Deck Wins and Zoo sitting in 16th place. I have had a number of people approach me in person and through social media to ask about the deck list and the tournament metagame. Let me preempt anyone else who may have questions about the deck...

...that it was a 20-person field and I dropped at 1-2. The card choices I made were dictated by a last-minute scramble to find cards for a deck—any deck—and while I was able to cobble together something I like to call Red Deck Goes to the Zoo, it did not have the Punishing Fire / Grove of the Burnwillows combo or even the right assortment of fetch lands and Ravnica dual lands to run optimally.

If you are looking for something a little more relevant to get a sense of the format, you need look no further than Magic Online. When the virtual tournament center emerged from its weekly downtime on Wednesday, it did so fully Modernized and promptly fired off an 85 person Daily Event that churned out some of the first meaningful—and battle-tested— decks of the new format's life, with just over a week to go before Round 1 of Pro Tour Philadelphia.

The tournament produced six undefeated players sporting five different archetypes. There were even more deck possibilities lurking in the 3-1 bracket but from that scrum of players one deck emerged as the early front-runner: TwelvePost. 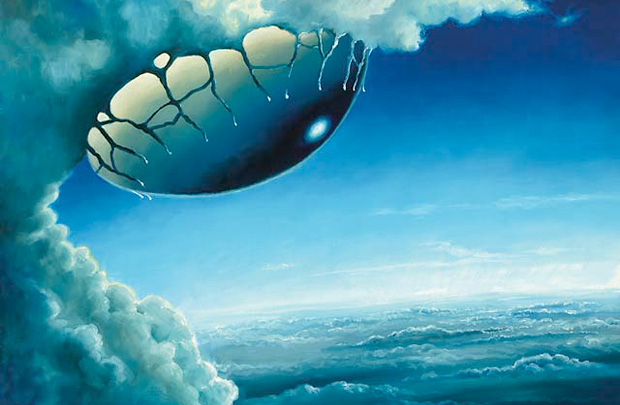 The origins of TwelvePost go back to Pro Tour Kobe and Pro Tour Hall of Famer Gabriel Nassif. The format for the event was Mirrodin Block Constructed and Nassif played a Tooth and Nail deck that ramped into and entwined the game-breaking card with Cloudpost—and eight more virtual Cloudposts in the form of Sylvan Scrying and Reap and Sow to fetch additional copies. 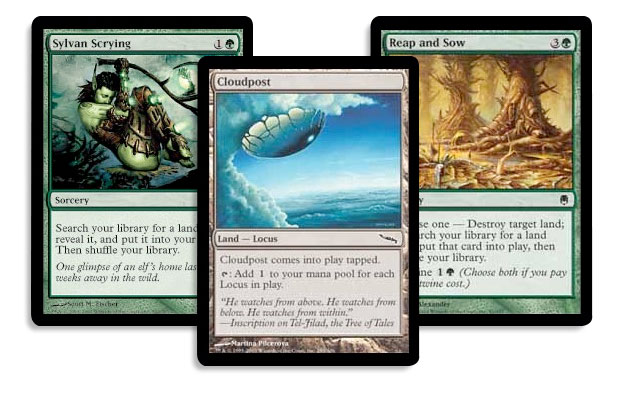 The deck carried him all the way to the finals, and the name has stuck with the archetype, which, conveniently, can conceivably have twelve posts on the battlefield at once thanks to the recent printing of Glimmerpost and the continued presence of Vesuva.

Two different versions of the deck went undefeated in that first Daily Event. When the format and banned list were first announced there was some concern that Zoo decks would run rampant, but when a deck capable of playing a turn-three Primeval Titan—Cloudpost on turn one, Cloudpost and Simic Signet on turn two, play a green source on turn three, and you can make a Titan—can also gain you 8 life off of two copies of Glimmerpost and another 10 life when you attack, things can go really far south, really fast for a deck trying to scratch together 20 damage with a limited supply of creatures and burn. 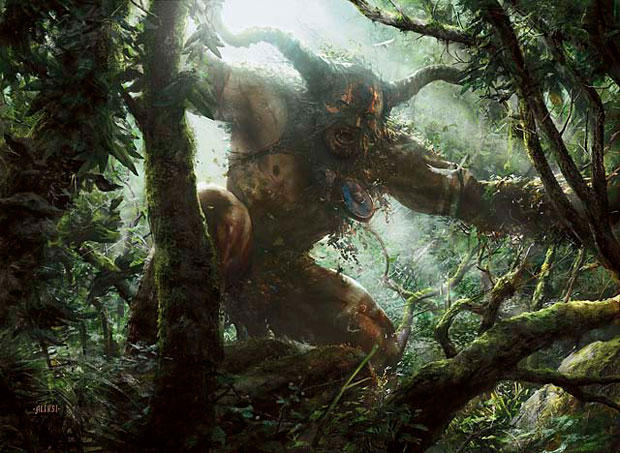 If you happen to find yourself not under any pressure to gain life, you can also turn that turn-three Titan into a turn-four Emrakul, the Aeons Torn. Follow the same formula as before, but when you play Primeval Titan get two more copies of Cloudpost / Vesuva, which will give you at least eighteen mana to work with on turn four—and that is assuming you don't play a land or attack with Primeval Titan first. If you haven't drawn your Emrakul over the first couple turns of the game you can also slow things down a bit and get Eye of Ugin with your Primeval Titan on turn three to search for your Emrakul with your embarrassing wealth of mana on turn four.

The two undefeated versions of the deck went about their business in very different ways. The one piloted by Ume_Nao not only had Primeval Titan to cheat additional Loci into play but went with Scapeshift—a card that we have seen do some unfair things with Valakut and that is likely to get paired with landfall creatures in some versions of Modern Zoo—as well. Paukan did not play Scapeshift but did go old school with Reap and Sow, a card that seems like it is going to be a key card in the mirror for this archetype. Keep in mind that the various Posts all look at all Posts on the battlefield, not just under your control, so keeping your opponent's lands at bay seems like it could be a "big deal."

Take a look at the two decks side by side and you can see where they overlap and some of the significant differences: 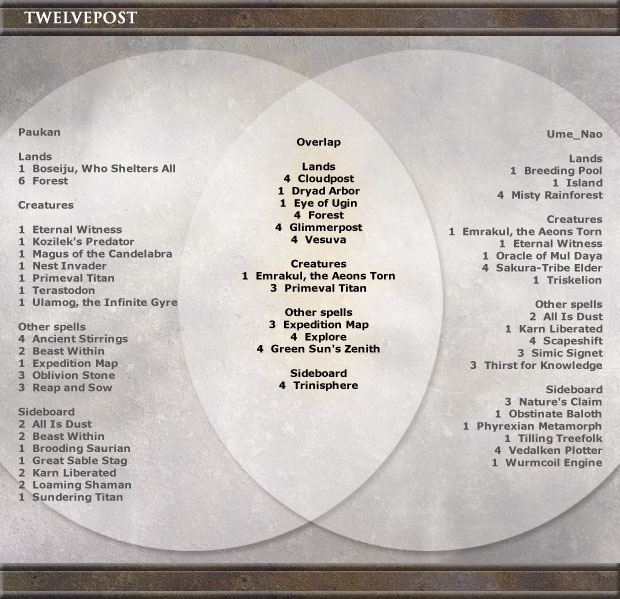 Paukan and Ume_Nao were not the only players in the undefeated bracket to harken back to the old Mirrodin days with their fresh take on Modern, and Paukun was not the only player looking at the supercycle of Magi from Time Spiral block. The players known as sneakattackkid went for a new version of Affinity that can punish Cloudpost-based decks out of its sideboard.

There was definitely a question as to how well the Affinity archetype could hold up with the banning of all its crucial colored-mana-producing artifact lands, but this version has very few colored-mana spells in its main deck—just a set of Galvanic Blasts, Flings, and Atog, which it is able to run off of four Mountains, Mox Opal, and Springleaf Drum. The deck gets exciting after sideboarding, when it brings in six Blood Moon effects to slow down archetypes ranging from Gifts Ungiven-based four-color decks to the aforementioned TwelvePosts. 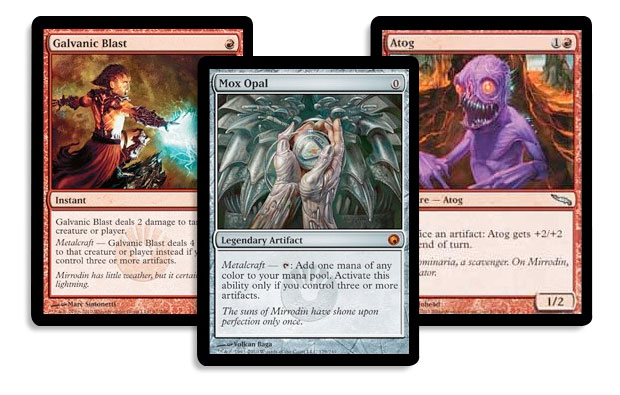 One of the popular archetypes lurking down in the 3-1 bracket was Living End, and the All-in-Affinity deck was able to dance around that deck's eponymous spell by sacrificing all of its artifact creatures to Atog and Flinging it in response. When the dust settled, the Living End deck had its creatures out of the graveyard, but the Affinity deck was right back where it started.

You can find all the undefeated deck lists—which include Elves, Melira combo, and Shamans—as well as all the 3-1 deck lists here. (There have already been, as of this writing, two more Modern Daily Events, here and here, so be sure to watch the Magic Online page for more results as they come in.)

Personally I cannot wait for next week and Pro Tour Philadelphia to arrive. Rich Hagon and I will be bringing you as many deck techs as we can cram into the queue as this fledgling format steps onto the Sunday stage for the first time in the hands of the game's best players. In the meanwhile if you see me on Magic Online, I will likely be tuning up my version of TwelvePost complete with Panoptic Mirror, Plow Under, and Time Warp—I think I am kidding, but I'm not sure.