s I type this, Pro Tour–San Diego is being assembled behind me. The Feature Match area is being constructed, the Pro Player Lounge is being stocked with food and drink, and tables are being pushed together in an unfamiliar square arrangement to accommodate the first-ever Two-Headed Giant Draft Pro Tour. Amid all the chaos, Randy and I managed to record our preview of the big event. 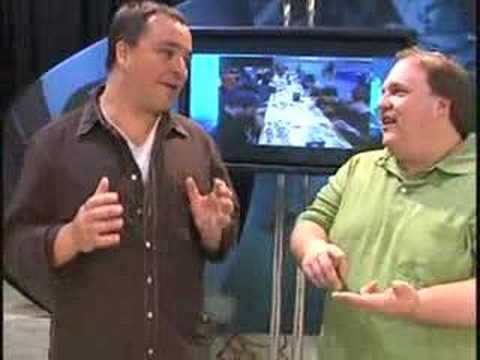 The players, many coming straight from Montreal, have to put aside thoughts of Block Constructed and focus their energy—and their teammate's energy—on the task of mastering this new and uncharted format. But if you are reading this at home, it is highly likely that you have not tabled your interest in Block Constructed. This is not to say that you will not closely follow all of the goings-on this weekend here in San Diego, but the fact is that you need to qualify for Valencia.

I was watching the Sunday Montreal coverage and found I had some unanswered questions regarding decks that had been hinted at, such as the apparent Reanimator list that was kicking around, Billy Moreno's 7-1 decklist from Day One, and what did all those Pro Tour winners bunched up near the top of the standings end up playing? 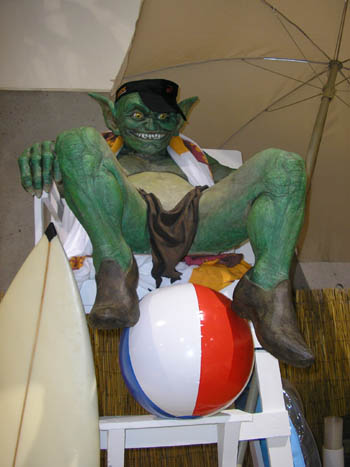 The Goblin King is ready to hit the San Diego beaches.I decided I wanted answers and called Grand Prix–Columbus winner Steve Sadin on Sunday night to ask him to grab the Day Two decklists before heading back to NYC but he was out at dinner. He explained that they were going to swing back to pick up Kyle Sanchez (who was contributing some fine match coverage while everyone else ate), and that he would call Kyle to ask for the decklists so Steve could then bring them into the office on Monday. It seemed like too many moving parts—not to mention a run-on sentence—for it to ever come to pass, but sure enough when I came into my office on Tuesday decks nine through sixty-four were waiting on my desk.

The initial coverage provided a look at the Top 15 decks and Mike Flores and Frank Karsten have already dissected those in this week's columns. I am going to delve deeper and bring you some of the archetypes that did not make the cut but could still be worth being aware of as the PTQ season progresses.

Melissa DeTora is a long-time East Coast player who was in the running all weekend long with her deck that combined the Stonewood Invocations from Osyp's list (Osyp thought this should have been a format defining card going into Yokohama and perhaps if he had, you know, actually attended it would have been!), with the Predator elements that we see in Gabriel Schwarz's and Andre Coimbra's decks.

Stonecloaker is a pretty exciting piece of technology when it comes to the Tarmogoyf fights. Since your opponent's Tarmogoyfs are the same size as yours they tend to bounce off of each other. Stonecloaker lets you stack damage, return your Goyf, and remove a key card type from the graveyard—it is pretty saucy when the only sorcery in either graveyard is a Call of the Herd—to kill their suddenly smaller Goyf. It is also quite exciting with Riftsweepers and sideboarded Thornscape Battlemages.

I have seen a number of different attempts to name these decks, ranging from Mike's suggested Predator.dec to Melissa's cryptic Roger Williams Zoo but I hope that if something is going to stick, it will be Justice League (as was suggested my Matthew Siler on his 33rd-place decklist).

Day Two was not an entirely happy place for Francisco Leon Valencia, who fell to 18th place after starting out Day One with a 9-0 record—and one meager bye to contribute to the cause. His monored deck featured Tarox Bladewing and was one of the few decks I saw that were still packing hatred for White Weenie with maindeck Sulfur Elementals and Ghost Flames, which may explain his success in the first nine rounds. It may also make it an excellent choice for the PTQ season.

4 Magus of the Scroll

One of my favorite decks in the tournament belonged to one of my favorite players on the Pro Tour. Pro Tour–Columbus champion Pierre Canali ended up in 23rd place with his take on Bridge from Below in the Block format. Many of the French players ended playing the same list including 64th-place finisher Raphael Levy. Pierre still stands by the list as a great choice for the PTQs, although he did mention that none of the other players piloting his creation were as happy with it as he was.

4 Dread Return 4 Bridge from Below

4 Bonded Fetch 4 Bridge from Below

When you hit the bottom of the Top 32 you find a cluster of five monoblue decks including decks by a pair of Constructed Master candidates and Pro Tour Champions – Gabriel Nassif and Mark Herberholz in 29th and 30th places, respectively. The decks are, not surprisingly, close to identical as the Heesif machine has formed a formidable tandem in recent Constructed events.

One of my favorite physical decklists was Tomohiro Kaji's. Looking over the physical lists you can sometimes see the last minute decisions that a player goes through before handing in their list such as Frank Karsten's struck-through Strangling Soot in his sideboard that became...Strangling Soot. Kaji's changes were a little more sweeping. 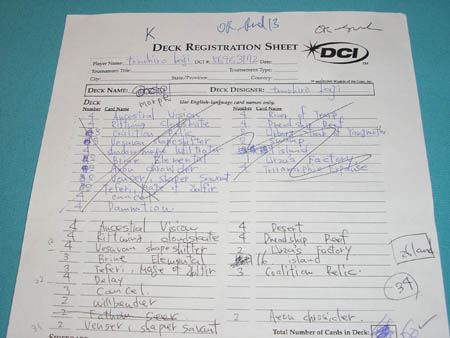 Finally, Billy Moreno started the tournament with a 7-1 record only to, by his own account, "punt the three of the next four rounds". He described his deck with a sly grin as mono-red with Korlash.

Rounding out the parade of past Pro Tour winners playing on Day Two of Grand Prix Montreal was Gadiel Szleifer with his Korlash Control deck. While he finished near the bottom of the pack on Day Two, he was credited with the design of Michal Bernat's near-identical list that finished in 21st place.

To the surprise of pretty much nobody, Frank Karsten is the winner of The Fanatic ballot for the second year running. If the combination of his column, strong performances, and Deck-o-Pedia were not enough to lock it down, the story of Frank and his trusty Yokohama slop bucket was the clincher. Just take a look at this one comment from the message boards where the poster explained who he voted for and why:

"Karsten. I have played in more than one game with my friends in which I've heard someone say: 'In response, I throw up in a bucket' (in reference to Yokohama)."

Next up is Constructed Master, which is going to be a real bloodbath of a category with a collection of the game's greatest players and fastest-rising new stars. Click on the big image to the right to read profiles and cast your vote.

There will also be a Players Vote taking place this weekend at Pro Tour–San Diego. Players taking part in the Pro Tour will have a chance to vote on the five players with the greatest totals of lifetime Pro Tour Points who have never been to the Invitational. The list is impressive and should spark some heated debate this weekend as players jockey for votes and the honor of playing in their first all-star game. The five candidates are Jelger Wiegersma (280 lifetime points), Bram Snepvangers (243), Hall of Famer Rob Dougherty (235), Osamu Fujita (198), and Shuhei Nakamura (187).


The July Friday Night Magic promo card is a sick one all right and will be given away all month long at an FNM store near you.

Firestarter: Vote on the Player's Vote

Who do you think will win the Players Vote this weekend and why? Do you think the results of this vote would be different if this ballot were open to the public? Head to the forums to sound off, and then tune in to Sunday's Top 4 webcast starting at 5 p.m. ET when we announce the winner.