ho cools all the cool cards? Return to Ravnica is shaping up to be one of the most exciting sets in recent memory—and I am typing this within full view of a box of Innistrad packs searching for a draft. Everybody is scratching out decklists for Standard, updating their Cubes, and keeping track of Commander-relevant legendaries, but what are the cards that get tasked with fending off this horde of shiny new toys?

This week's preview card returns to shut down some of the most powerful Planeswalkers in the game—cards that did not even exist when this card was originally printed way back in Saviors of Kamigawa—but it can also slam the door on a new mechanic as well as providing a respite from some of the peskier cards this new set has to offer. Historically, it has not been a card you see main-decked, but it has been a sideboard staple whenever it has been available in Standard, which includes the aforementioned Kamigawa era and as recently as Magic 2010.

Let's get a load of the new art on this old favorite that is going to be taking another stab at the Standard format as soon as it returns to Ravnica. 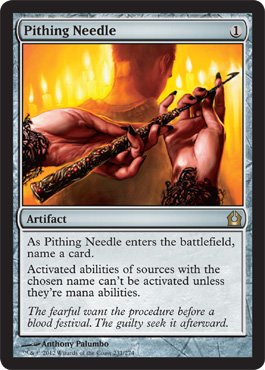 Going through old FAQs, I found some of the clarifications that have been made about how this card works and figured we could head them off here and see how those lessons apply to some of the new cards that are being spoiled in the new set. The first two entries I found go all the way back to when it was first printed and both apply to Underworld Connections—a card that people seem very excited about playing in the new set.

Naming a card such as Tomb of Urami doesn't prevent players from playing its mana ability, but it does keep players from using the Demon-Spirit-creating ability. 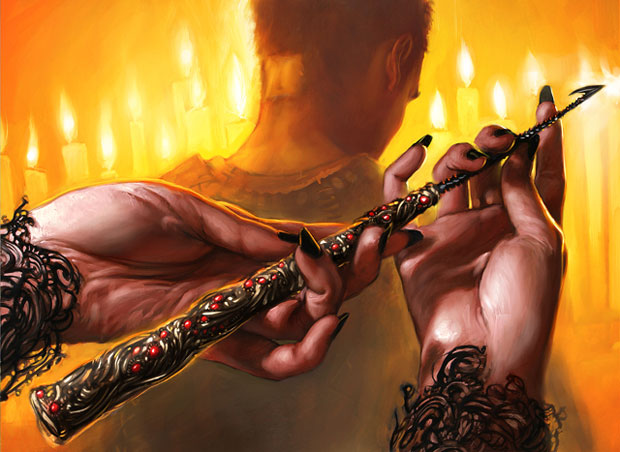 You can name any card, even if that card doesn't normally have an activated ability.

Now you can name Underworld Connections with Pithing Needle but it won't do anything, since it grants the ability to the land it is enchanting—but you can name that land, ideally once it is enchanted, unless you know your opponent is playing mono-black with only Swamps in his or her deck. Otherwise, you will have to wait until your opponent chooses a land to enchant to Needle it. He or she will still be able to tap that land for mana, but the activated ability granted by Underworld Connection will be cut off. It is also worth noting that your opponent cannot sit there and wait to see if you name the enchanted land before drawing one last card; your opponent needs to use that ability in response to you playing the card. Once you have named a card, it is too late for your opponent to sneak in one last activation.

Now, as far as I know there is no Eternal Dragon on the horizon, but this definitely applies to the scavenge mechanic. Dreg Mangler is a card that Top Decks's Mike Flores was just rhapsodizing over on the two most recent Top8Magic podcasts. It is a hasty, efficient beater that offers late-game value by allowing you to scavenge three counters onto whatever creature is still standing at that point. Pithing Needle can't shut down the whole mechanic but it can certainly pinpoint a specific card. Say your opponent cast Jarad's Orders for a Knight of Infamy and a Deadbridge Goliath (Work with me here! I am trying to get as many card images into the mix as possible!), putting the green fattie into his or her graveyard, expecting to untap next turn and make an 8/7 protection-from-white exalted creature against your mostly white deck. Pithing Needle would let you alter those plans. Not the best use, but I expect that we will see a Needle naming scavenge cards in our near Standard future.

Pithing Needle affects cards regardless of what zone they're in. This includes cards in hand, in the graveyard, and exiled, as well as cards in play. Pithing Needle also affects tokens in play and copies of spells on the stack.

I included this later variant on the previous entry due to the last sentence and mostly because it reminded me of one of my favorite cards in the new set—Nivmagus Elemental. Rule of thumb: as long as a card has some cost preceding a colon and an ability after the colon, it is an activated ability. So even though the Elemental's ability, which involves munching on spells that are on the stack, is a fancy new one, it is still something that gets shut off by Needle. (By the way, if you see me playing in the Tournament Practice room once I get my Magic Online play set of the new cards it will almost certainly be with a deck that starts out with four copies each of Delver of Secrets, Nivmagus Elemental, and Quirion Dryad, with a copy or two of Talrand for good measure.) 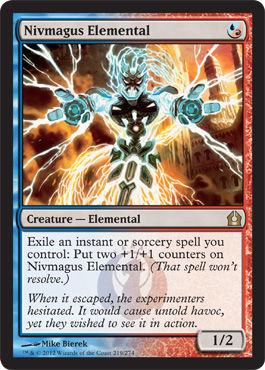 Once Pithing Needle has left the battlefield, activated abilities of sources with the chosen name can be activated again.

This is a sad one since it means cards like Abrupt Decay (let's all practice the Standard Mantra for the next two years: "But it dies to Abrupt Decay!") and Detention Sphere can free your opponents from the Needles that were inhibiting them from doing what they set out to do when they built their decks.

So if you name Trostani, Selesnya's Voice with Pithing Needle, you can stop your opponent from populating the world with Angel tokens from your attacking Geist of Saint Traft, but you can't do anything about your opponent gaining 4 life every time the Geist spawns a migratory Angel token that isn't going to stick around. Cold comfort, I know.

We sort of addressed this earlier when talking about Underworld Connections, but perhaps a better example of this is Grove of the Guardian. You can still tap it for a colorless mana if it is the card named by Needle, but you cannot sacrifice it to make an 8/8 fattie. 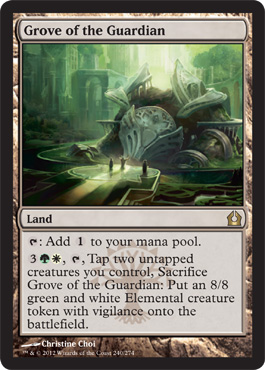 You can name any card, even if that card doesn't normally have an activated ability. You can't name a token unless that token has the same name as a card.

Again, this was something we talked about earlier in connection with Underworld Connections, but the token piece of that entry was very interesting to me. Since Pithing Needle asks you to name a card, you cannot do anything about a token that is not a copy of an existing Magic card that you could name. For example, imagine that you had a 3/3 Wolf token enchanted with Arcane Teachings and your opponent was within a couple of activations of being pinged out by this unlikely combination. Pithing Needle would not save your opponent there since he or she could not name "Wolf token" to shut down the activated ability that it would not normally have.

The one thing that doesn't get covered in the FAQs I saw online was what everyone already knows...

There are some jobs Pithing Needle just gets done better than others. You see it happen in Cube drafts all the time, and I expect it to be pretty standard in Standard to see Planeswalkers with the business ends of Pithing Needles sticking out of their heads.