the composition of the various National teams is to be any indication, we should be in for a heck of a show at Worlds this year. There has been a consistent thread of quality weaving its way through all of the Nationals rosters that includes three World Champions and multiple Pro Tour Top 8 competitors. 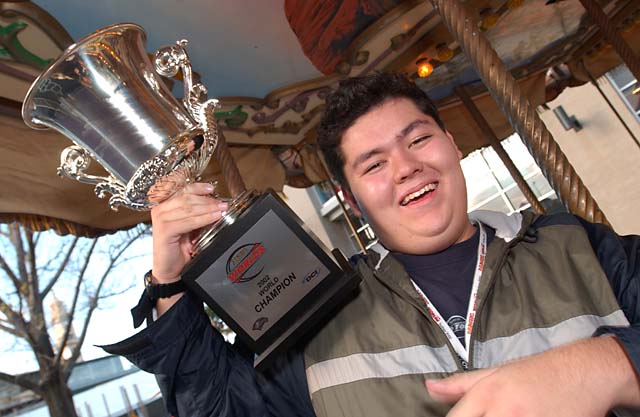 A much-younger Carlos Romão after he became the 2002 World Champion.Carlos Romão first became a Magic superstar when he piloted Psychatog – utilizing an innovative strategy of not fighting over card-drawing spells in the mirror match – to the World Championships in 2002. He was the first Latin American player to win a Pro Tour. Many suspected that Carlos' best days were behind him, but perhaps spurred on by losing out on the Latin American Invitational Ballot for the first time in years, he has been playing recently with the fire of old.

With a room full of Japanese, Dutch, Belgian, Portuguese, and French players, Carlos was not the non-North American pundits were picking to win Grand Prix-Phoenix but that is exactly what happened two weeks ago. From there it was straight home for Carlos to play in his National Championship, winning a berth on his National team. Carlos joins Norway's Nicolai Herzog and Austria's Benedikt Klauser as National team members at this year's Worlds in the most likely to be featured under a “Don't Call It a Comeback” headline category.

Brazil's National Championship was won by rising Brazilian star and Pro Tour-Charleston finalist Paolo Vitor Damo De Rosa, playing Akira Asahara's Snow Ideal deck from Japanese Nationals. The identical 75-card list was played by Francisco Barciella, who finished fourth but lost to Romão in the 3/4 playoff; Carlos was playing Budget Boros. Hats off to second-place finisher Elton Fior for the heads-up and the decklists – as you can see the Top 4 was dominated by the snow theme. This was the second time that Elton finished as high as second at this tournament.

2 Form of the Dragon

2 Form of the Dragon

Here's how the bracket looked:

“Besides me, the Brazilian Team is none other than Paulo Vitor Damo da Rosa and Carlos Romão!!” bragged Elton, who is a Pro Tour veteran and has finished as high as 19th at the World Championships. “I'll be the proud teammate of the two best Brazilian players, and they can attest, I'm no slouch either!”

Brazilian player Lucas Bethoud also wrote in with decklists and praise for the National team. He is expecting big things from this squad and assured me that they will produce solid results come Worlds: “That's easily the best the country could offer for the team competition. All the players are taking their game seriously this year and we hope great things can come from Paris in December.”

If Brazilian Nationals was all about Scrying Sheets, Dutch Nationals was all about Breeding Pool – five different players had decks that bore a passing resemblance to Sea Stompy. Of the five, only National Champion Kamiel Cornelissen had any red in his deck for cards such as Seal of Fire, Kird Ape, and sideboarded Rumbling Slum. Three of the remaining five opted for a straight blue-green ninja build while the fifth deck was all about Snakes on a Plane.

As a professional observer of professional Magic, I found the Dutch bracket heart-breaking. One side of the bracket was loaded up with the Top Dutch names while the other featured Rogier Maaten and three lesser-known players. Not only did Frank Karsten and Jeroen Remie get knocked out in the quarterfinals but Rogier did as well, losing to eventual National team member Robert van Medevoort.

Joining Kamiel and Robert on the National team was former World Champion and Rookie of the Year Julien Nuijten. Julien has playfully groused about Karsten getting credit for his innovations – such as AEther Vial in the Affinity deck and the pattern Frank used to lay out Sealed Decks after the release of Guildpact – and he got to exact some revenge by knocking The Fanatic out in the quarterfinals, losing in the semis to Kamiel, and then earning a spot in the playoff for 3rd/4th. Julien joins Katsuhiro Mori and Carlos Romão as former World Champions on national teams this year.

If you have checked out the Tournament Center this weekend, then you already had seen the Dutch coverage as well as the Spanish Nationals coverage featuring National Champion Javier Dominguez. If Javier's name seems familiar to you, it is because he was part of the Spanish cabal that cooked up Cephalid Breakfast for Columbus, which he played to a Top 32 finish at that tournament.

Here are six of the Top 8 decklists from Spanish Nats.