New Year everyone! Since the last time we met, the Limited PTQ format cycled down. This past weekend saw the last Limited PTQs for Geneva and there will not be any more individual Limited PTQs feeding Pro Tours in 2007. After what has seemed like an endless string of 40-card events, Constructed events are finally upon us – and its not just PTQs. Just this coming weekend alone you could play in relevant Magic events from Friday night right through to the beginning of the week.

Normally I show off the new Friday Night Magic foil prize card at the end of my column. I realize that there is no reason that your local FNM participating store could not run the event as a Limited event (which would seem weird considering the build-up I just created for Constructed events) but whether your local store runs the event as a 40-card or 60-card affair, this month’s FNM is especially relevant to Constructed connoisseurs. The Firebolt that you can win this evening might just come in handy if you plan on playing in any PTQs over the coming weeks, as the flashback burn spell is a Boros Deck Wins staple. 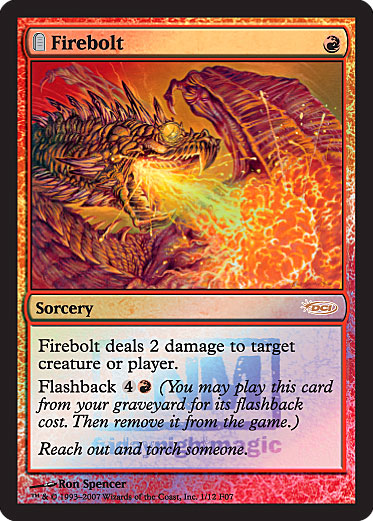 Saturdays and Sundays are chock full of Constructed opportunities in the coming months. The most relevant happening for TWTW readers is undoubtedly the PTQ season for Yokohama that starts up on Saturday. The format is Extended and you can find the most successful Extended decks from Worlds right here in case you haven’t already done your homework.

Remember to keep coming back to the Tournament Center throughout the season as there will be Top 8 decklists from each week’s PTQs. The metagame shifts very quickly and unless you stay on top of the past week’s innovations you could find yourself being closed in on by ominous fins. Fortunately for all of us Mike Flores gives weekly swimming lessons throughout the PTQ season.

In addition to the PTQ season, there is the fresh Magic Scholarship Series to think about. Players 18 years of age and younger without any Pro Points earned at a Pro Tour event – Pro Points earned at Grand Prix do not count toward losing amateur status – are eligible to compete in these Standard tournaments. Everyone who participates in one of these events receives an exclusive foil promotional Whirling Dervish.

There are plenty of other prizes as well including pens, deluxe school portfolios and satchels – all designed to make your school life easier. But the most important prize is a $500 scholarship award and an invite to play in the Championships later this year with $100,000 in scholarship money on the line. Since the early days of the Junior Pro Tour through the end of 2006, Wizards of the Coast has given away $2,926,000 in scholarship prizes and will cross the $3 million threshold by this summer.

If that was not enough Magic for you already, there are also City Championships to consider. The Beta season is just getting under way in North America and will provide a new on-ramp for the Road to Worlds, as players will be able to earn byes to their Regional Championships and win invites to Nationals at these weekly tournaments. We will be checking back on the early results from these events in the coming weeks. Like FNM, these tournaments will be a mix of Limited and Constructed with the Constructed events running the gamut from Vintage to Standard (although only a very small percentage can be run as Vintage or Legacy).

The 2007 Pro Tour schedule has featured a glaring hole since it was first announced in this column last year. The location of Worlds has remained a mystery – albeit a poorly kept one. It has not been exactly a state secret that Wizards was hoping to hold the tournament in New York City, but it was unclear whether or not the Pro Tour would actually return to the city that never sleeps for the first time since Kai and the Phoenix Foundation won at Madison Square Garden in 2001. 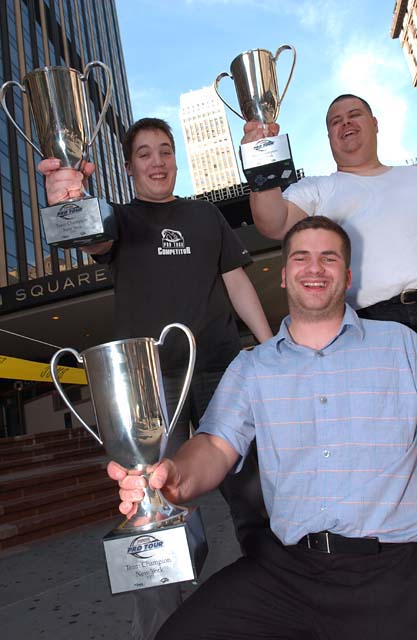 It's been six years since New York hosted a major Magic event.“I am sure this will make BDM very happy,” prefaced DCI Program Manager Scott Larabee before making the official announcement about this year’s World Championships. “Worlds will be in New York City in 2007. It will be held at the Javits Center on December 6-9, 2007. Those with sharp eyes will note that this will be a four-day Worlds.”

Traditionally Worlds has been a five-day marathon that is actually even longer when you factor in the day for registration and the player party. Personally, I welcome shaving a day off the festivities. I don’t know about the players, but speaking as a coverage team member I know that we are usually all worn down to a dull finish by time the event concludes. I asked Scott how this was going to be handled.

“While we are still finalizing details, it looks like Worlds will be 16 rounds (instead of 18) with five rounds of Constructed and a three-round draft on Days One and Two. Day Three will be the team day. Day Four will be the finals," Scott explained.

One fewer day is not the only change on the horizon for World Championships. The team format is undergoing a dramatic facelift as well:

“While we haven't ironed out all the details, it does look like we will be running the team competition in 2007 as Two-Headed Giant,” said Scott. "We will have more information on exactly how that will work in the coming weeks.

“These are all not necessarily permanent changes,” Scott was quick to point out. “From time to time, we have (and will) try out new formats and ways of running tournaments. Examples from the past are the Pro Tour-Philadelphia skins format in 2005 and three-person team play, which was an experiment when we tried it back in 1999. We will continue to try out new formats and tournament systems. We may continue to use them or we may decide that they do not work.”

While You Were Sleeping

We closed the tournament season with the Japanese Magic community once again dominating the World Championships and we pick up right where we left off. While the rest of the Magic world took a well-deserved break from the game after Worlds, the Japanese community had to dive back in for one last event. Each year there is a major invitation-only tournament in Japan that is known as The Finals. There are qualifying events leading up to the Constructed extravaganza that features one day of Standard and one day of Extended play.

Last year’s winner was 2004 Pro Tour-Kobe winner Masashiro Kuroda, which should give you an idea of the level of competition found at this event. If you need additional evidence, look no further than this year’s winner Katsuhiro Mori. The former Rookie of the Year followed up his 2005 World Championship title by winning the 2006 Japanese National Championship and another trip to the Top 8 of Worlds in 2006. He fell short of the mark but his TriscuitTron deck made it all the way through to the finals in the hands of Ryo Ogura before losing to Mihara’s storm of dragons. 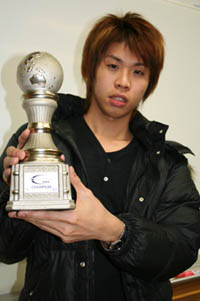 Katsuhiro Mori added another impressive title to his resume.Mori took his Tron deck back to the drawing board and began to reshape it – perhaps to be more successful against a certain storm-based combo deck. The creation that emerged can only be called PickleTron as he replaced the two Triskelavus cards with the Brine Elemental/Vesuvan Shapeshifter lock – along with a Teferi-fueled Mystical Teachings to find them.

Apparently the deck has been taking Magic Online by storm. Portuguese rising star Andre Coimbra has been tearing up the PEs with the deck and it was featured in Frank Karsten’s column this past Wednesday, where among other things he complained about the word “pickles” being attached to Brine Elemental decks.

Mori won the event, defeating Yuya Watanabe’s more traditional IzzeTron deck in the finals. Along with the pair of Tron decks in the final, there was a herd of aggro decks split between Boros and Gruul builds. The Top 8 was rounded out by an updated Panda Connection that moved Wrath of God to the sideboard and a deck I have dubbed Lunar Flare. It is a Solar Flare variant with black that does not use Smallpox. Why Lunar Flare? Skeletal Vampire would have nothing to do with anything called Solar.

Without further ado, here are the 2006 Top 8 Standard Decks from The Finals.

2 Call of the Herd

While Katsuhiro Mori was winning The Finals last year’s winner, Masashiro Kuroda was playing in a new end-of-year tournament in Japan that focuses on Limited skills. There were no invitations for "The Limits" – players needed to win a shop qualifier first. Each winner then advanced to the regional qualifier, and the winners of the each regional qualifier was awarded a spot at the event, along with transportation and accommodations. 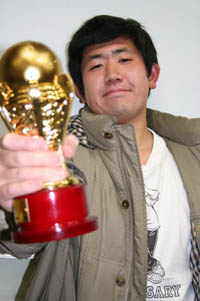 Ryo Tasaki hoarded the black removal en route to victory.In the Rotisserie Draft each and every card from the set – Timeshifted cards too – was laid out on the table and the players picked cards one by one. It was a tough draft featuring two former Pro Tour winners – Kuroda and Pro Tour-Prague winner Osawa – in addition to Hall of Fame-eligible Itaru Ishida.

In the end it was little known Ryo Tasaki defeating Osawa in the finals. In addition to beating the Prague champion, the Tokyo University student had to get past two-time Worlds Top 8 competitor Ryo Ogura in the semifinals.

“Before this event he was just a guy,” laughed coverage reporter Keita Mori. “But now he is the champion.”

Firestarter: What’s in a name?

Pickles or U/B Morph? Which camp of deck namers do you fall into? Do you prefer more whimsical deck names that might be tied to some back story (or in this case the brining process of making pickles and the figure of speech of “being in a pickle”) or would you rather much more straightforward names that explain exactly what the deck does. Do you like your deck names to have a little Solar Flare? Share your thoughts, opinions, and favorite deck names in the forums.