et me be among the last to wish you a Happy New Year, as a new season of Magic tournaments prepares to unfold in Austin, Texas, with the first Grand Prix of 2012. Since last we left off, before the holidays, the Magic Organized Play program has reversed position on a number of previously announced decisions. This was exactly what many players had written to Santa and requested. If you have not seen those changes, I urge you to go here right now and read about all of them right away. It is okay...I'll wait.

Personally, I am very excited about the return of Professional Points, which historically have been an amazing measuring stick of a player's career. Someone like Jeremy Neeman—who crossed the 100-point mark at Worlds in San Francisco—can now continue to rack up points and contrast his career with other fast starters like Mark Justice, Randy Buehler, Gadiel Szleifer, and Brad Nelson. There was also some drama at the end of last season as Raphael Levy made a run at 500 lifetime points. He fell short by a little more than a dozen but will have ample opportunity this year to join only Kai Budde in the exclusive half-a-grand club. Should fellow Hall of Famer Olivier Ruel show up for a Pro Tour this year—or make any headway at a GP—he would also join that elite decimalization of players. Not that 499 lifetime points is anything other than amazing, but as the Pro Tour Historian I am attracted to big round numbers.

But selfish historian reasons aside, what do these changes mean for the participants of Grand Prix Austin? For one thing, it means players will be able to qualify for the Pro Tour with a Top 4 finish—and earn airfare on top of any other prize money they win that weekend—which is, by my limited math skills, infinitely more invites than had been previously announced. Byes for the Grand Prix will still be determined by the previously announced "Top X" Competitive Points method, but will change with the next season to a method that reward players based on hitting seasonal thresholds.

Pro Points for the Grand Prix will be dialed down slightly to levels last seen in 2008, as there are going to be Grand Prix events almost every weekend no Prereleases, Game Days, or Pro Tours are being held. Those points will be used to set benefit levels for players and determine which players will represent their country in the newly created World Magic Cup, which is replacing the late, and vocally lamented, Magic World Championships.

Normally, players would have a full year to rack up points for that honor, but due to the sudden nature of the changes, there is going to be a shortened season for World Magic Cup bids. The season structure is moving back to something that straddles two calendar years, with a mid-year event that the season culminates in—much like the way it used to function until the mid-2000s, when Worlds was moved to the end of the calendar year (think of each "year" aligning with blocks rather than a calendar year, with this current "year" ending after Pro Tour Avacyn Restored in May).

Each team participating in the World Magic Cup will have four team members. Three of those members will be the winners of three invitation-only qualifier tournaments held in each participating country from April 21st through June 9th. The thresholds needed to be invited to a qualifier tournament will vary from market to market, but they will essentially be three mini-Nationals that reward the winners with an invitation to the World Magic Cup and airfare to get there. Invitations to the World Magic Cup Qualifiers will be determined by players' Seasonal Planeswalker Points totals from Dec. 26, 2011 to April 1, 2012. While qualifier invitations will be determined by seasonal tallies this year, that will change over to what players accrue over the year for the 2012–13 season.

The fourth slot will be given to the player from that country with the most Professional Points for the stretch of time from June 13, 2011 to May 13, 2012. If you look over the current Pro Point standings you can see some pretty big names at the top of the list to headline the teams for the World Magic Cup, but there are two Pro Tours plus lots of GPs before those standings are finalized.

Traditionally, the team competition for Worlds was the most exciting when the teams involved featured players who also excelled in individual pro competition, and under this new system of invites for the World Cup, you would have a name player from every country virtually guaranteed. Yuuya Watanabe for Japan, Luis Scott-Vargas for the USA, Richard Bland for England, Samuelle Estratti for Italy, Martin Juza for the Czech Republic, Jeremy Neeman for Australia, and Paulo Vitor Damo da Rosa for Brazil would be the players guaranteed a berth if the invitations were given out right now.

When the current season plays out, with all its Grand Prix and two Pro Tours, it is hard to imagine a scenario where every team in the World Magic Cup does not have a name player who has recently posted strong finishes at one or more of the most difficult events in the Organized Play pyramid. Keep in mind that even if Luis Scott-Vargas is the American player who earns the spot, it does not mean other top Americans like Josh Utter-Leyton, Conley Woods, Owen Turtenwald, Brian Kibler, or Ali Aintrazi can't win one or more of the three remaining spots at the World Magic Cup Qualifiers.

The specter of those guaranteed berths and the fact that half the events used to qualify are already in the books means that every strong finish at a Grand Prix, especially a win—starting this weekend in Austin—will be even more meaningful. Just think about the ridiculous hot streak that Player of the Year Owen Turtenwald put together last year in the opening months of the season with multiple Grand Prix Top 8s. In the next few months, a player who strings together a nice run can lock up a PT invite, some serious miles on his or her frequent flier program, and a berth at the World Magic Cup. Keep an eye on the pros willing to travel to the US for the concentration of events here during this first season, as they can likely lock up a spot for a smaller country with one or two strong finishes.

One of the most visible criticisms of the last set of Organized Play changes came from the upper echelons of the pro community, who suddenly found themselves not knowing what job security they had for next year. Even though Players Club benefits were locked in from last year throughout 2012, the following season was murky at best. Players who found their first Pro Tour success during the coming weeks would not have a way of stringing together good finishes to stay on the PT—look at the early careers of Jeremy Neeman or Paulo Vitor Damo da Rosa for examples of the kind of players who might have fallen through the cracks.

In addition to restoring invites to the top-finishing twenty-five players from one Pro Tour to the next, a revamped Pro Players Club is being instituted with a streamlined and easy-to-understand system of rewards based on Pro Point totals. Players who have already locked in benefits from last season's performance will get those benefits for the first five months of the year, and then when the new levels are set on May 13, they'll get whichever benefits between the two systems would be greater. Players are now playing for their 2012–13 season benefits and—just like in the old system—their benefits will kick in once they cross a threshold after the switchover happens on May 13.

For the 2012–13 season, players' Pro Point tallies will come from events going back to last June 13th and through this May 13th. That means the club is already seeded with players based on the results from the latter half of last year. Japan's Yuuya Watanabe is the only player who has assured himself of Platinum status already with his 42 points, but there are a few players who can close the deal in Austin. Luis Scott-Vargas is just 1 point shy, and Josh Utter-Leyton (35 points), Richard Bland (34 points), Samuele Estratti (34 points), and David Ochoa (32 points) are all within one GP of locking in their Platinum status come May. 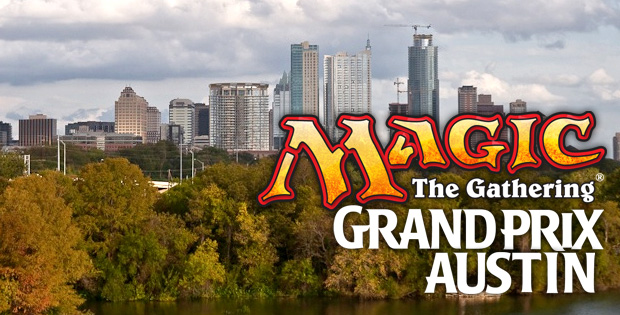 I am always excited for a Grand Prix, but I am especially stoked for Austin—in part for the changes made over the break, but mostly due to it being the first GP that will have officially sanctioned video coverage. Richard Hagon and I will be manning the GGSLive booth throughout the weekend along with Rashad Miller and Nate Price to bring you the game's best players as they show off their mastery of the Innistrad Limited formats.

One of the things I want to do during the coverage is answer your questions about playing in large tournaments. If you have any questions—from becoming a DCI member to building a Sealed Deck to what is the best way to shuffle your deck—please share them with me via the email link below or on Twitter, either @magicprotour or, personally, @top8games, and I will do my best to address those questions on the air. It is going to be an amazing year and I hope you will join us for the inaugural tournament all weekend long.