An Overnight Success (Many Years in the Making)

am going to assume that if you are reading my column that you are already aware of the events that transpired this past week in France at the 2006 Magic World Championships. If you are not please take a moment to review the coverage here – there is a buffet of audio, video, and text coverage to satisfy any appetite. 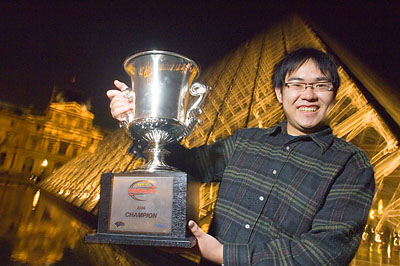 In Frank's column as well as Mike's there has been ample examination (with much more to come no doubt) of the decks that were played. As has become the custom after each Pro Tour this season, I caught up with the winner of the tournament, Makihito Mihara, moments after he Dragonstormed his way to victory past Paulo Vitor Damo da Rosa, Gabriel Nassif, and Ryo Ogura.

The finals match was a bloodbath, with Mihara taking it in three straight games – including an amazing Gigadrowse-fueled win through an in-play Teferi. The Quarter- and Semifinals were both five-game affairs with plenty of dramatic highs and lows against two of the three most recognizable names playing that Sunday.

“Amazing…awesome!” exclaimed Mihara with a smile wider than the $50,000 check he was holding when asked how he felt to emerge with the win.

“In the very last game of the Semifinals I topdecked Seething Song against Gabriel Nassif when Nassif was tapped out,” Mihara replied when asked what the most memorable moment was for him in the Top 8. “That was the key moment. Also, I made a terrible mistake in quarterfinals, but eventually the cards I needed were there. That topdeck was one of the key points.”

While watching Mihara play from the webcast booth I was struck by how he tried to rein in his disappointment and embarrassment after realizing he was going to come up short of enough mana to cast Dragonstorm. Ultimately he needed to Repeal into another Rite of Flame in order to win the match. It was a topdeck worthy of Craig Jones, but more importantly, it underscored the importance of not becoming derailed by your mistakes. All players make mistakes, but the ones who succeed are the players who don't dwell on them.

“In my mind I accepted the mistakes and whatever would happen,” Mihara recalled of his state of mind during that exciting game. “I had to find a new way to fix them and to beat the opponent.”

In Mihara's epic match with Gabriel Nassif, it was unclear to many observers whether or not Nassif had made a mistake by tapping out to forecast Proclamation of Rebirth with multiple Remands in hand and one Martyr of Sands already in play. Nassif did not draw his seventh mana and could not activate his Martyr when Mihara found the mana accelerant he needed to take advantage of his defenseless opponent.

“I think that Nassif had a pretty good average to draw lands on either of those turns,” Mihara said. “I think it was the correct play and he got somewhat unlucky. If he could have found that land he would have reset the damage clock…I think it was an acceptable play.”

One of the reasons that Nassif may have felt comfortable enough to tap out was that after showing Mihara a Wrath of God when he sacrificed a Martyr earlier in the game the Japanese player chose not to cast Dragonstorm with his mana accelerants but simply made a lone dragon by casting it.

“I tried to force Nassif to use his Wrath of God with that first Bogardan Hellkite,” he explained when asked if by holding back on the Dragonstorm he had lulled Nassif into a false sense of security. “I did not try to play any mindgames. I simply tried to make the correct play at the time. There was no attempt to get a misread from Nassif.”

This was the first Pro Tour Top 8 appearance for Mihara, but he is no overnight success story. If you have followed the Japanese Magic scene for the past few years you may recognize his name from multiple Japanese Nationals Top 8s. If you have played with or against CAL in an Extended tournament in the past year you are familiar with his deck designs. And if you pay attention to Top 16 and Top 32 finishes, you may have even seen this coming.

Mihara reminisced: “I started playing at the release of the Weatherlight expansion. Friends at school showed it to me and I bought some theme decks. Six months later I went to a local tournament for fun. That was the first time I had played Magic against someone who was not a friend.”

He continued to play on the local tournament scene for three years before winning a PTQ to play at Pro Tour – Venice and making the trip the Italy.

“I built BeastBidding and played Olivier Ruel in the first round. He defeated me so badly…my deck could not beat Goblins and I did not make Day Two. That day there was a Sealed Deck PTQ for Yokohama that ran from 6 p.m. to 8 a.m. of the next day. I made it through to the finals. Every Japanese player was at the venue and I felt so relaxed, but I lost because I was so sleepy.”

So what was the turning point for Mihara when he finally felt like he could sustain himself on the Pro Tour?

As the alternate on that National team he played at Worlds and finished in the Top 32. He followed that up with a Top 16 finish in Honolulu. While most PTQ players – heck, many PT players as well – would give their left arm for a Top 16 finish, they are often overlooked. It was a Top 4 finish at a Grand Prix in Kitakyuushuu, Japan, that has had the most impact on Mihara's Q rating prior to his winning turn in Paris.

His CAL deck took the dredge mechanic to a new level, fueling Seismic Assault and Solitary Confinement with three cards per turn from Life from the Loam. Mihara played a more or less identical version of the deck for the Extended portion of Worlds.

“Basically the addition of new guild lands between Kitakyuushuu and now creates a different land balance, and Sakura-Tribe Elder becomes Wall of Roots, but other than that it is the same,” summarized Mihara when asked about the changes to the deck. But what about all of the hate that promised to banish it and all graveyard strategies to the sidelines of Extended?

“The presence of Leyline of the Void is very scary, but if you keep a Life from the Loam in your hand you can recover easily from Tormod's Crypt,” he explained. Despite the Leyline he still recommends the deck for the impending qualifier season. “In a PTQ where you have to play many rounds CAL is a very good deck that does not get mana-screwed often.”

In closing I asked Mihara what he had taken out to make room for the three crucial storage lands from his sideboard. He had so much time against control decks that he was able to actually Gigadrowse out a Teferi player at sorcery speed – he sided out basic lands.

Next up for Mihara? Geneva with the all the benefits of a Level 5 mage!

Firestarter: What to play in PTQs?

Is graveyard hate overrated? Do decks like Ichorid, The CAL, and ‘Tog have a realistic shot in the new Extended metagame that will lurch to life as PTQs get underway? What do you think the Top 8 decklist pages will look like in the coming weeks? Sound off in the forums.