here has been an increasing trend over the past few Pro Tours of bringing back the age-old (or at least eighteen-year-old) tradition of holding fantasy Pro Tour drafts in the weeks prior to the event. Social media means that the picks can be done in full view of your peers and take place over the course of a couple of hours that could otherwise be spent working, learning, or some other productive activity. It also means you get a pretty good idea of who the rank-and-file players think are first-pick material, sleeper picks, and rising stars. And sometimes you find a player that stands alone.

I have seen at least one of these online drafts in which Luis Scott-Vargas is fantasy-banned.

Pick someone else, 'cuz you can't play with him. 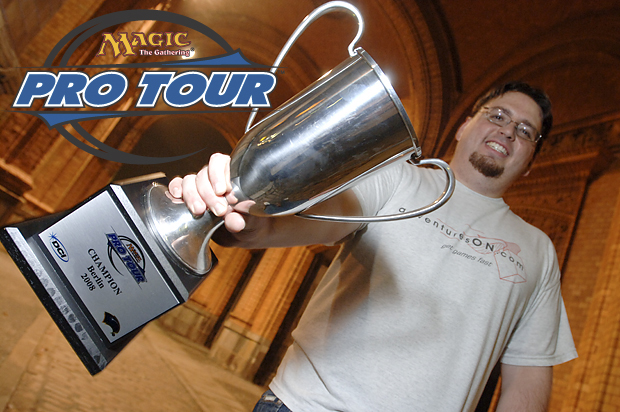 It turns out that first picking Luis Scott-Vargas over the past three seasons is something akin to playing a turn two Stoneforge Mystic and fetching Sword of Body and Mind against blue-green midrange. Since Pro Tour Berlin—which he won—Luis Scott-Vargas's median finish, which is coincidentally a three-year median finish over twelve Pro Tours, is 11th. ELEVENTH! For six of his twelve Pro Tours he has finished 11th or better. For the other six he has finished 11th or worse, but of those six events he has only missed Day Two once and not finished in the money twice.

Here is the scoring that at least one fantasy draft is using to calculate the winner. (Thanks to Julian Booher for the details):

Luis Scott-Vargas warps the format. I would pick him first. Wouldn't you? He has been one of the best players in the game for several years, and by surrounding himself with similarly talented individuals, he has had a hand in, and access to, the best deck designs for each Pro Tour format and is a formidable drafter. But you can't pick him. Banned.

So if you have the first pick in a draft for Pro Tour Philadelphia—and can't pick Luis—who do you look to with your precious slot? 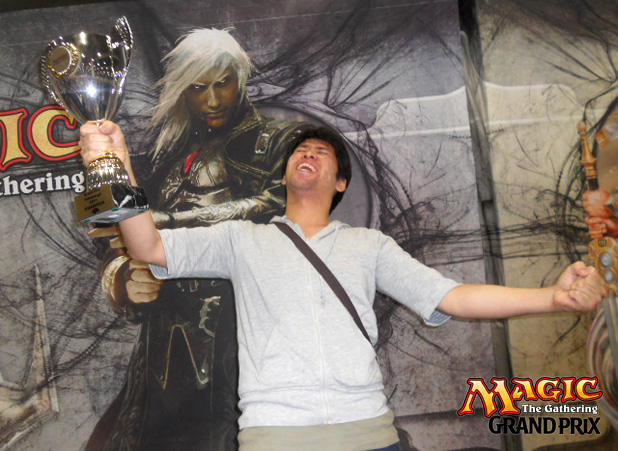 You would be hard pressed to do better than picking Yuuya Watanabe. The former Rookie of the Year and Player of the Year is heating up. He may not have the insane median finish that Luis has—and to be clear, nobody does or they would be fantasy-banned—but you have to respect a hot streak. Over his last three events Yuuya has finished second, losing to Luis Scott-Vargas the finals of GP Kansas City followed by a pair of wins at GP Shanghai and last weekend at GP Pittsburgh.

The hot streak is reminiscent of the one he went on in 2009 during his Player of the Year run which saw him make Top 8 at six different Grand Prix, Japanese Nationals, and Pro Tour Austin in a concentrated burst of Magic awesomeness. With his win in Pittsburgh he has completed a three–Grand Prix climb up the Player of the Year standings and is now tied with Luis Scott-Vargas in the Top 5 with 38 points apiece. Considering that he was scuffling somewhere around 10 points before his recent GP dominance, you have to imagine he is due for a couple of good breaks at a Pro Tour. He should have access to a solid deck since he spent the time leading up to Grand Prix Pittsburgh at a secluded ski lodge with several hundred of the this year's awarded Pro Points.

The same core group of players that constructed Tree House for Pro Tour Amsterdam and netted Caw-Blade for Pro Tour Paris sequestered themselves in an off-season ski resort to survey the relatively uncharted Modern format. The aforementioned (and by that I mean I have mentioned him at least four times already) LSV, Brad Nelson, Brian Kibler, Paulo Vitor Damo da Rosa, Conley Woods, Martin Juza, Owen Turtenwald, David Ochoa, and Ben Stark (among others) were joined by incoming Hall of Famer Shuhei Nakamura and Yuuya Watanabe. 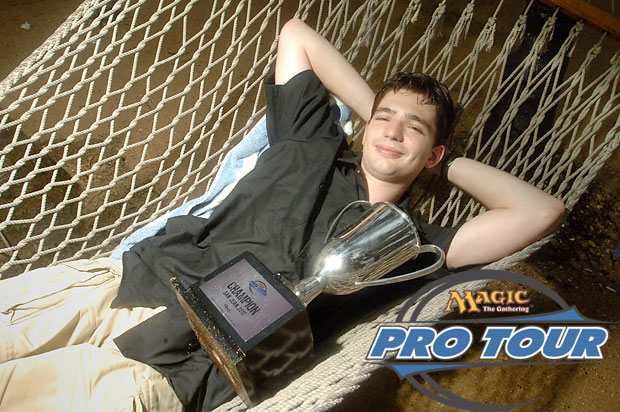 Watanabe seems poised for a great finish, and I would pick him...right after I picked Paulo Vitor Damo da Rosa. Since his breakout season in 2006 when he finally hit the Sunday stage—after moneying for the past few events—the only season in which Paulo has not made at least one Pro Tour Top 8 was 2007. He had two in 2006, none in 2007, two in 2008, one in 2009 and two last season. Those seven career Top 8s give him the fifth highest total in the history of the game and I would not be the slightest bit surprised to see him join Hall of Famer Darwin Kastle with eight career Top 8s when this weekend comes to a close. 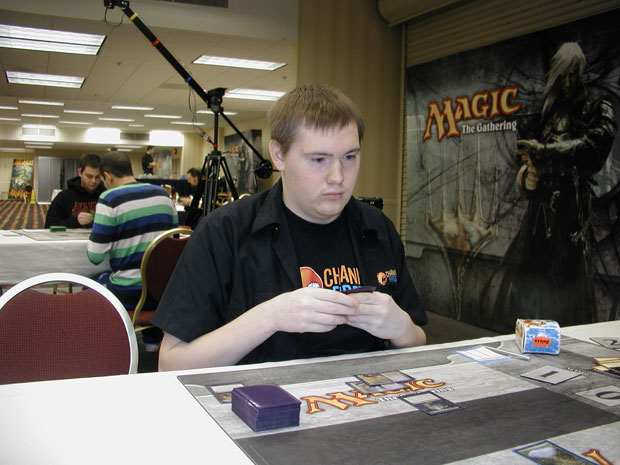 Honestly I could easily pick any of the names that were staying in that house—most of whom went in the first round of Booher's draft. Any of them could pick up a finely tuned deck and do well in Philly. Just look at what happened in Pro Tour Paris when the ChannelFireball.com crew was littered throughout the Top 16 armed with Caw-Blade. Owen Turtenwald has made his way to the top of the Player of the Year standings without having secured the first Pro Tour Top 8 of his career. 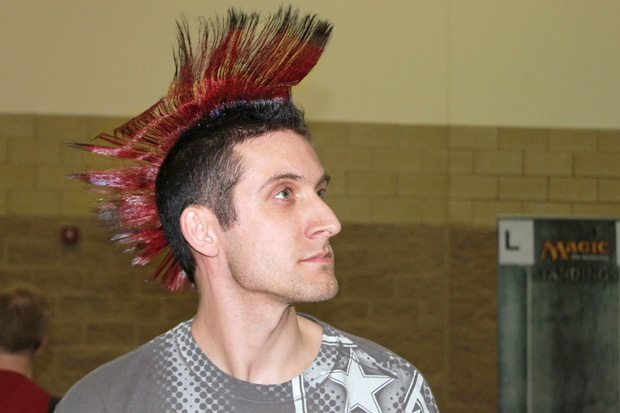 I would likely pick Patrick Chapin. The brand-new Modern format is a deck builder's paradise and he is coming off a Top 8 earlier this year. Patrick finished fourth in the Pro Tour Hall of Fame balloting and it seems inconceivable that he would not get into the Hall of Fame with just one more strong finish (not that he needs it). Patrick is also running pretty hot right now, with a Top 8 at Grand Prix Pittsburgh and a heart-breaking 9th-place finish at US Nationals. 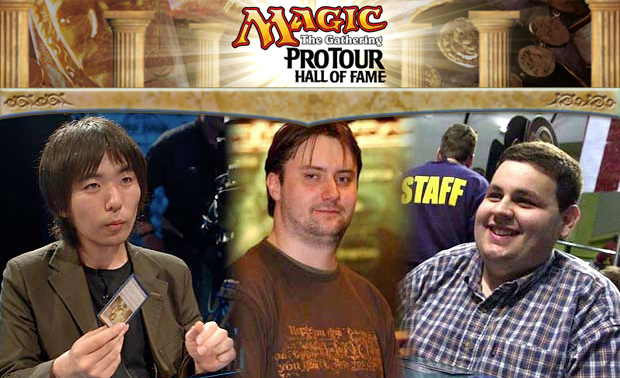 Speaking of the Hall of Fame, all three incoming members of the 2011 class will be playing in Philadelphia with special invites extended to Steven O'Mahoney-Schwartz, Anton Jonsson, and Shuhei Nakamura. Nakamura is—predictably—right in the mix for the Player of the Year title and qualified several times over. Joining them in Philadelphia are a host of other members ranging from Gabriel Nassif and Brian Kibler to Frank Karsten (whom we discussed in last week's column) and inaugural class member Olle Rade, who was just in Pittsburgh at the GP.

If I was going to use one spot on my Fantasy Draft roster on a Hall of Famer it would be Jon Finkel, who is going to be in attendance and has been practicing for this event. Jon has been running good this past week, although it may not have seemed that way when the week started. Jon was featured in an online column by a tech blogger who went on a couple of dates with him. Although she had nice things to say about Jon's appearance and financial means, the focus of the piece was that Jon did not disclose his identity as a champion Magic player—or, as she put it, a "dweeb." According to the author of the piece, Jon should have warned her in his profile that he played Magic. 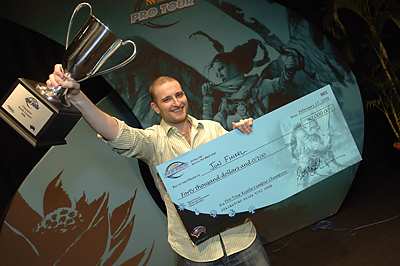 The column became an internet sensation as the world wondered why someone would ridicule Jon for being the best in the world at something he loves. The story took off and was featured in Forbes, The Village Voice, the Escapist, and other sites and began to burn up Reddit.com. Jon ended up telling his side of the story via an Ask Me Anything page on Reddit that quickly became one of the most highly rated pages on the site. There has been no shortage of dating offers for Jon, but none were as high profile as the one that came at the end of an Attack of the Show segment on G4.

News reader Sarah Underwood ended a section about the story by stating that she would be willing to go on a date with the Magic Hall of Famer and even tweeted after the segment:

SaraUnderwood My Feed today! And I might have gotten a date out of it! http://bit.ly/rrAntI

If you are looking for some sleeper picks to draft I suggest you take a look at this article by Chris Mascioli who has been doing some statistical analysis of players in the split-format Pro Tour era. There have been ten Pro Tours since the change to featuring both Constructed and Limited at every event. There are some obvious names at the top of the various ways that Mascioli sliced up the data, but there are a couple of sleeper picks lurking in the numbers. Jeremy Neeman, Matt Sperling, Lucas Blohon, Ivan Floch, Christian Calcano, Lukas Jaklovsky, and Niels Noorlander are all players who have performed consistently well and will likely still be on the board when the first wave of picks have been selected.

By the time this article goes live the Magic Weekend festivities will have already kicked off. The Last Chance Qualifier will have concluded, Pastrami sandwiches from the Reading Terminal Market will have been consumed, and Pro Tour Philadelphia will be poised to start. You can follow the coverage all weekend here on DailyMTG.com, and on Sunday starting at 10:45 a.m. EST I will be in the booth along with Rich Hagon to bring you all the Top 8 action live to your computer.