Pick a Card—Almost Any Card

have been thinking about my preview card this week within the context of the Top 8 decks from Grand Prix–Houston that took place last weekend. The card is a single-mana pinpoint discard spell in the tradition of Duress, Thoughtseize, and Ostracize. There are restrictions on which cards it can take, but it is also more open-ended than either Duress or Ostracize. Let's take a look at the card in question: 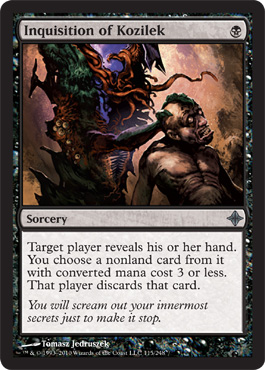 As you can see, the only restriction as to the card types you can select with Inquisition of Kozilek is lands—although that's not the only restriction on what cards you can pick. You are limited to picking cards with a casting cost of three or less but your pick can be sorcery, creature, instant, enchantment, or even planeswalker (if you happen to catch someone playing with Jace Beleren). Duress is just not up to the task of taking down a Kargan Dragonlord and Ostracize is not gonna get you around the Realms Uncharted looming in your opponent's hand. Inquisition of Kozilek can handle both of them, and do so without having to pay 2 life to do it. Let's take a look at some of the decks from the Top 8 of Houston and see just how many targets there would be if you played this card against them.

Check out the Tomoharu Saito–designed Hypergenesis update that Shuhei piloted into the Top 8 of the event:

Putting sideboards aside for the moment, in the maindeck you can nab the following:

It is highly unlikely that you are going to want to take Hypergenesis—although your opponent could suspend it—but you would certainly be happy to disrupt Shuhei's plan by taking a Violent Outburst or Ardent Plea out from among a hand of otherwise uncastable fatties. Taking a Compulsive Research or Simian Spirit Guide could be fine but you are almost always going to want a card that is going to become a Hypergenesis. Against this deck you are not going to be getting any flexibility to offset the limitation of not being able to hit a sideboarded Venser, Shaper Savant or to thin a hand of creatures by taking Bogardan Hellkite. 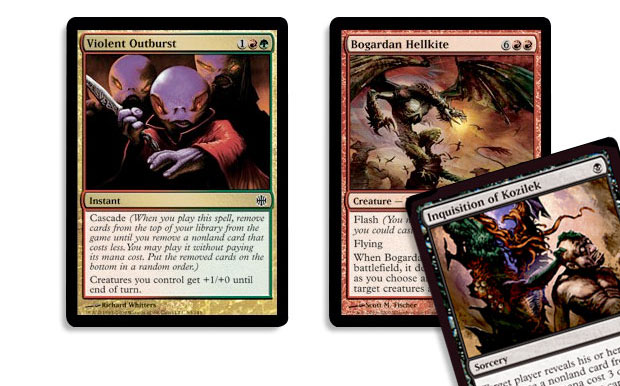 How about against Charles Lancaster's exciting black-white Smallpox deck that got as far as the Quarterfinals?

2 Damnation 4 Leyline of the Void 1 Wrath of God

Now this is a deck that Inquisition of Kozilek really shines against. Look at all the potential targets for discard—basically every non-land in the deck except for Baneslayer Angel:

With the exception of Bloodghast—which you are almost never going to want to them to discard—pretty much every other card in the deck is something you would conceivably want to take. You can force them to lose Tidehollow Sculler or Thoughtseize, Smother or Gatekeeper of Malakir, or Smallpox or Dark Confidant. Obviously Thoughtseize offers you even more flexibility in Extended—which was the format for last weekend—but paying two life is not always good for your health. Kenny Ellis's deck from the Top 8 has plenty of cards that you could nail with Inquisition of Kozilek since he built his deck in such a way to take even more advantage of Muddle the Mixture than most other decks in the format. Ken's white-blue control deck was able to "tutor" up a maindeck Mind Spring and a sideboarded Martial Coup. How lucky for Kozilek to have so many targets!

Just look at all the cards you can snag against this deck.

People certainly play with cards that cost more than three—and this whole block is all about that—but there is a reason that Spell Snare has been a tournament staple. It seems like the best cards cost two mana. From Counterbalance to Tarmogoyf to Umezawa's Jitte and on and one and on. Do I think it will replace Thoughtseize? Not in Extended, but I think this card will immediately find a place in Standard, where it can take things like Blightning or Knight of the Reliquary. That is flexibility not currently available in Standard on the first turn. In Block Constructed it can hit either end of the Cunning Sparkmage / Basilisk Collar combo (as well as intermediary Stoneforge Mystic), and it should be a valuable tool for players preparing for Pro Tour–San Juan. 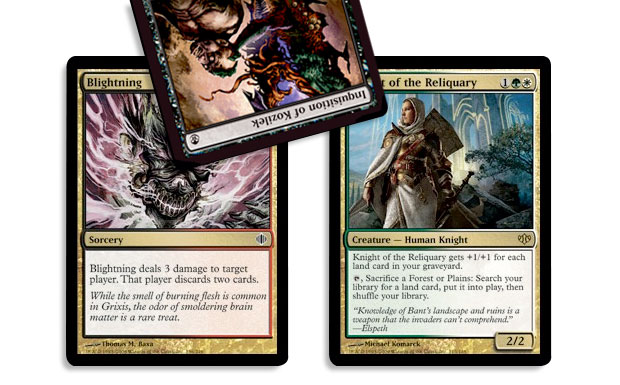 I think we already get the point that decks in Extended play with a lot of cards that cost three or less, but I want to showcase one more deck from the GP in Houston but mostly to take a paragraph to congratulate Adam Yurchick on finally getting a win after a pretty ridiculous string of near misses that had him in danger of being dubbed the Silver Surfer.

Adam finished 2nd at Grand Prix–Philadelphia a couple of seasons ago, finished 2nd at GP–Oakland earlier this PTQ season, finishes 2nd at last year's National Championships, and even finished 9th in Pro Tour–Hollywood. The sound you heard on Sunday was not a jet passing overhead, but an enormous sigh of relief from Adam as he was able to close out Shaun Rodriguez in two games in the finals with a Jace to the face for the win.

"Jace feels pretty good!" said Adam as he reduced his opponent's library to the two cards Shaun had been holding. "That is the first time I have ever ultimated it in my life!"

You can check out all the Houston coverage—by me and Limited Information columnist Steve Sadin—here. 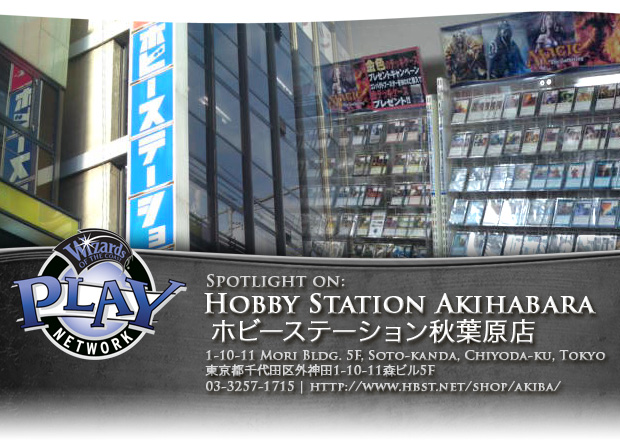 If you are looking for a game of Magic on a Friday night in Tokyo, Japan, you won't have a hard time finding a Friday Night Magic Booster draft at Hobby Station Akihabara. Winning that draft, on the other hand, is probably going to be a little tougher. The store has been in business for seven years and has floated from floor to floor in the building that houses it before settling into its 3rd floor location. Magic has been a cornerstone of their business right from the outset, and as such they knew they needed to be running Magic tournaments. They have been running FNM as long as they have been open and became a WPN location as soon as the program was announced. 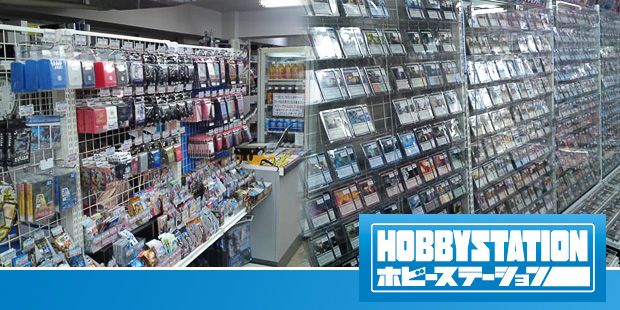 "It was a necessity to run events because that is how we attract our customers," said Yoshihiro Aoyama. "We are running sanctioned events every week and scheduling events for players to test decks for PTQ / GPTs. We want to make an environment for players testing their new decks."

While they foster a healthy Constructed environment, it is Limited that rules to roost on Friday nights at the Hobby Station.

"Every FNM is booster draft," said Aoyama. "And the shop staff enjoys playing booster draft during breaks, after our closing time, and holidays!"

If you head there for an FNM match don't be surprised if you find yourself sitting across from a Player of the Year. They draw their player base from Akihabara, Kanagawa, and Chiba, and they play host to Pro Tour competitors such as Yoshihiko Ikawa, Yuta Takahashi, Naoki Shimizu, as well as reigning Player of the Year Yuuya Watanabe. If you are looking out for some Japanese names to watch at upcoming Pro Tours and Grand Prix, the manager suggested that you keep an eye peeled for Koutaro Senba and Tsubasa Tomii.

Save the Date: National Qualifier Weekend

"The dates when these events take place is April 8 through May 16, but in North American and Latin America we have blacked out April 17 and 18, which is the Rise of Eldrazi Prerelease weekend," said Scott. "We have also blacked out National Qualifier Day which is May 15. This is what used to be called Regionals."

That quote is from my interview last week with Scott Larabee, when he revealed that what used to be known as Regionals in the United States and Canada was being renamed National Qualifiers—thus bringing one of the oldest Organized Play programs in line with the rest of the world. For U.S. players, you can go here and see that there are going to be 50 National Qualifiers—one in each state in the Union. That's more total events than Regionals in years past, and each event will award between two and eight invites to Nationals (to be held August 20-22 in Minneapolis).

When the State Championships were discontinued as a Wizards OP program many people suggested bringing them back as an event that fed into Nationals. Much like the current campaign for a certain computer operating system, there are hundreds of forum denizens who can say, "National Qualifiers were my idea."

You can find information about National Qualifiers here. Wizards has also begun posting National Championship information, which can be found here.