you may have already heard, there is a Pro Tour going on in my hometown this weekend—and not just any Pro Tour, but the World Championships. Things have been a little hectic this week as I have been taking part in many of the pre-event activities, and instead of my normally scheduled column I thought I would show you some snapshots of what has been happening in the days leading up to the start of action on Thursday.

Last Saturday there was the first of two Magic events in Washington Square Park featuring oversized Magic cards. The decks that were blown-up Elves vs. Goblins and players came to the park from around the world to try their hand at the matchup. Elves appeared to have the upper hand but it was not without a cost. It gets pretty tiring to shuffle the deck every time you fetch a land with Wood Elves after bouncing it with Wirewood Symbiote. 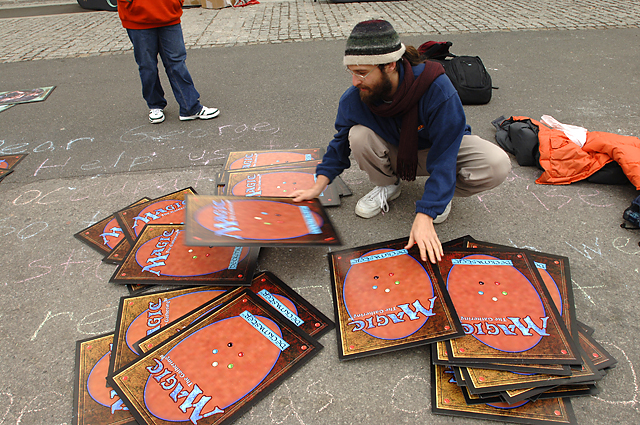 The goblin deck also came with some logistics issues as these players searched through their deck after playing Goblin Matron. 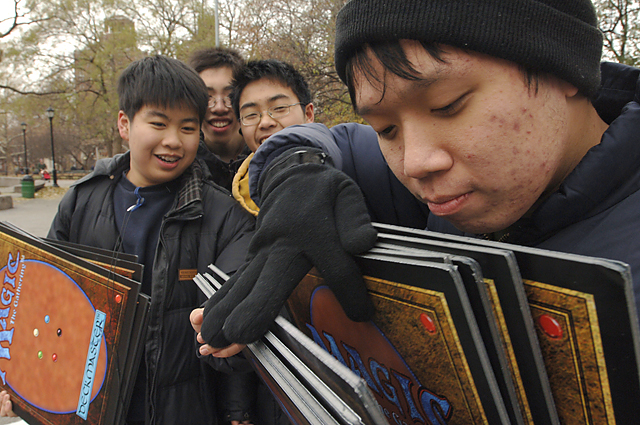 All in all both events were a lot of fun—although Wednesday's session was cut short by some unexpected snowfall. At one point we had some of the local gang from Neutral Ground facing off against a team of players that included National team members from Great Britain, New Zealand, and Brazil. The National team members were playing Elves and had gotten off to a fairly quick start with a couple of Elvish Warriors, Wirewood Symbiote, and Wellwisher. All the local team had in play was four lands and Tar Pitcher, and they had resigned themselves to the loss.

They were about to pack it in when I pointed out that they could pull out of the situation if they topdecked Mudbutton Torchrunner at that exact moment. I have asked many a card to "be there" over the years I have played Magic. I don't know if it was the absurdity of doing it in a park while a street musician improvised songs about Magic (yes, he played) with the arch looming over us or if it was just the fact that we had so much room to run around and whoop it up, but that Mudbutton was one of the sweetest cards I have ever seen pulled from the top of a deck—of any size. 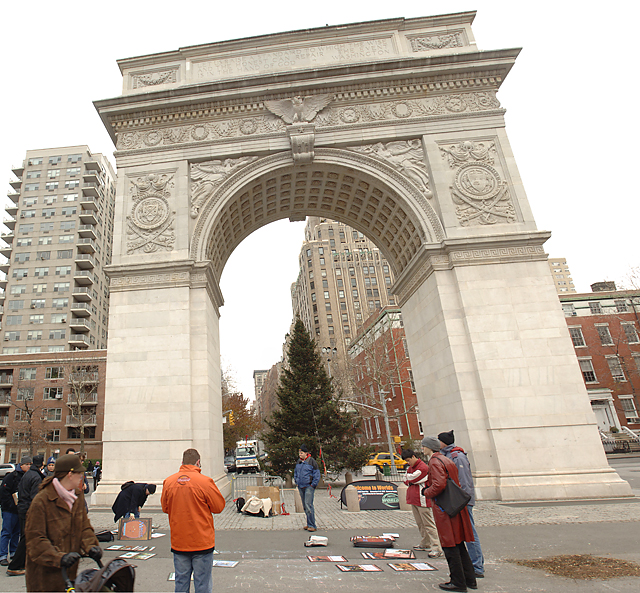 Wednesday night was the time for the opening ceremonies. With more than 80 countries participating at the World Championships, the flag ceremony was quite a spectacle. It has rarely been as appreciated by a home country, as this one was in the international melting pot that is New York City. 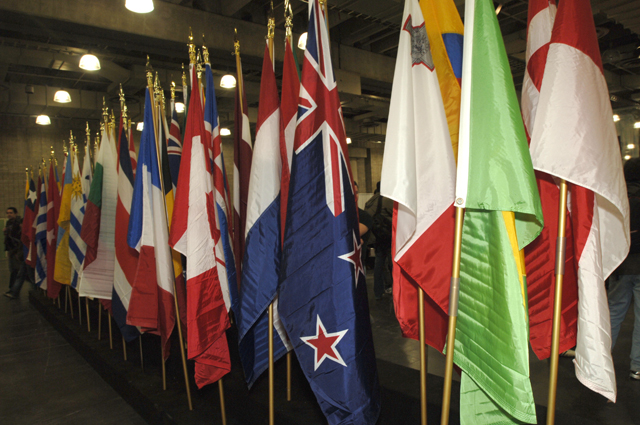 As DCI Program Manager Scott Larabee read off the names of the participating countries, there were smatterings of applause from local players showing off pride in their roots. 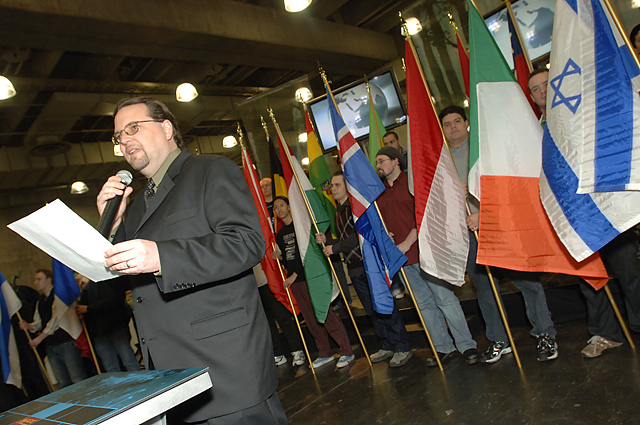 With the flag ceremony behind us, it was time for the 2007 Pro Tour Hall of Fame induction. It is always exciting for me to present the inductees, but I took special pride in this ceremony to see local hero Zvi Mowshowitz be honored for his tremendous achievements both on and off the field. 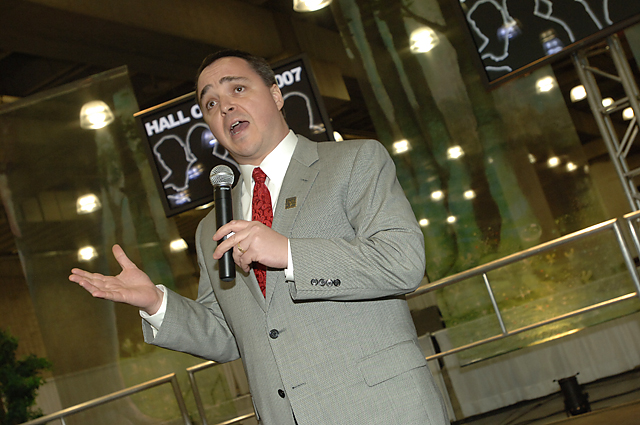 Each inductee was presented with a brief career overview followed by interviews with notable players and Wizards personnel about their careers. Once they were all introduced, it was time for the mandatory Green Lantern Corps shot. 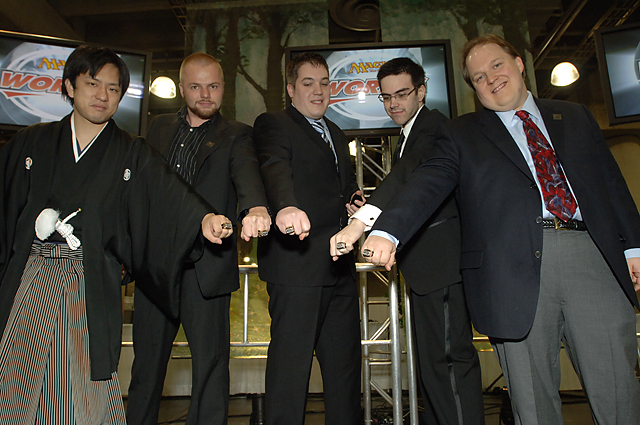 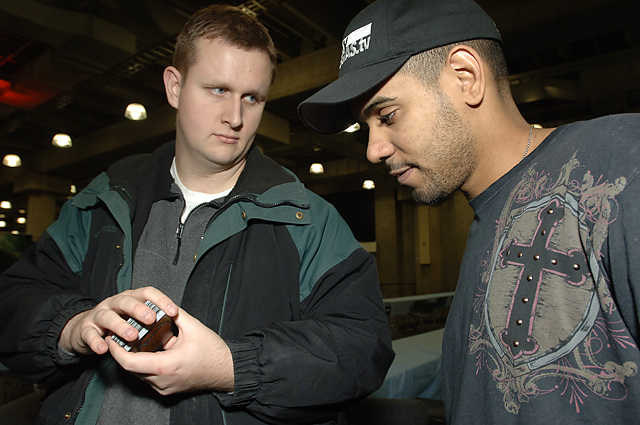 Many players—Worlds competitors and local fans—woke up at the crack of dawn Thursday for a taping of the CBS Early Show to show their support for their favorite game ... and how to cast Imperious Perfect on turn two. 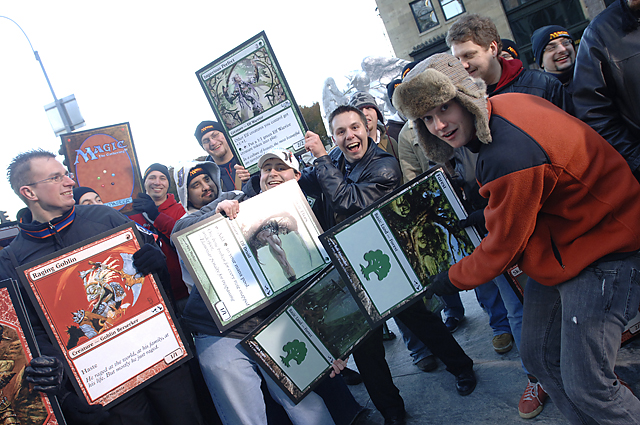 CBS Weatherman and outdoor personality Dave Price interviewed Christian Anderson about the goings on at the Javits Center, and the best way to attack with all your elves after casting an Ambush Commander. 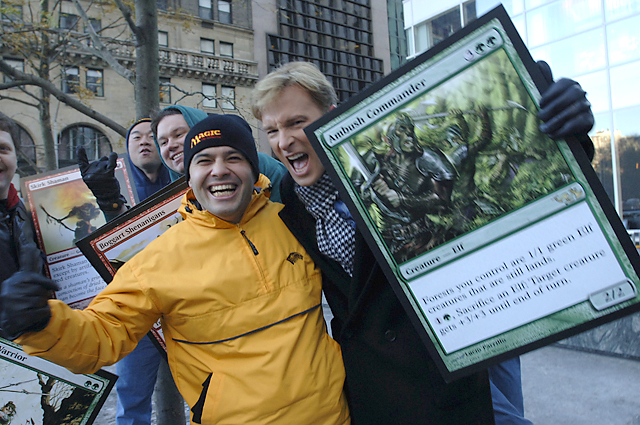 Players visiting the tournament this weekend had plenty to do even if they were not among the 386 competitors in the main event. There were four different Magic artists in attendance signing copies of their work, selling prints, and taking pictures with their fans.

Rebecca Guay may find herself signing more copies of Spellstutter Sprite if the Faerie deck does as well as advertised this weekend. 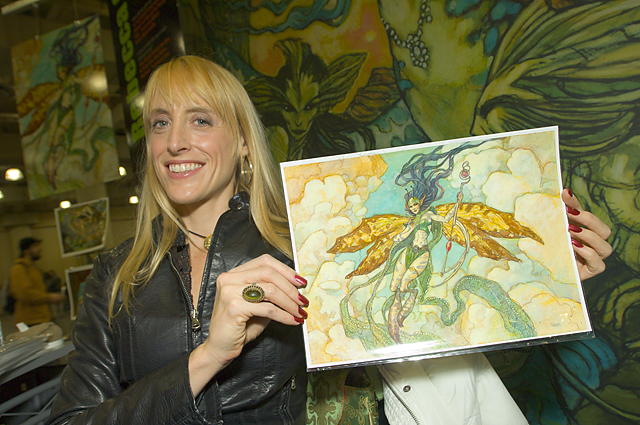 If you thought Thoughtseize was expensive, you should try buying the original art from Aleksi Briclot—and let's not even discuss his artwork for that green planeswalker. 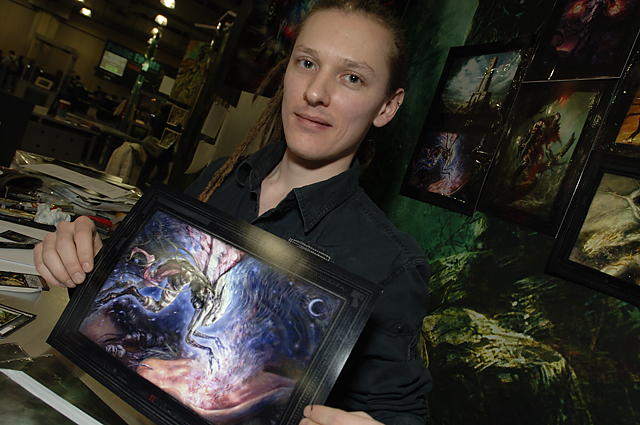 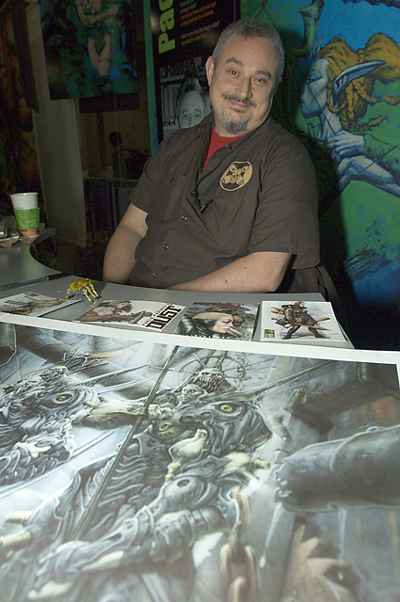 Jim Murray showed off some of the spiffy new artwork (in this case Gaea's Herald) that went into 10th Edition. 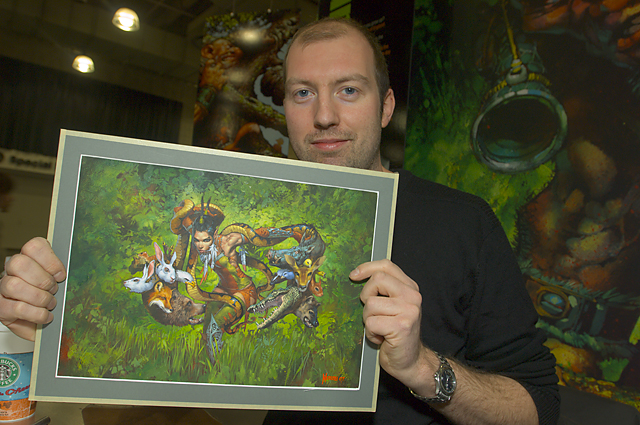 One piece of Jim Murray artwork that won't be available for purchase from the artist is Vigor. That particular piece will be given away in one of the many public side events that are taking place here all weekend—and that happen at virtually every Pro Tour throughout the year. 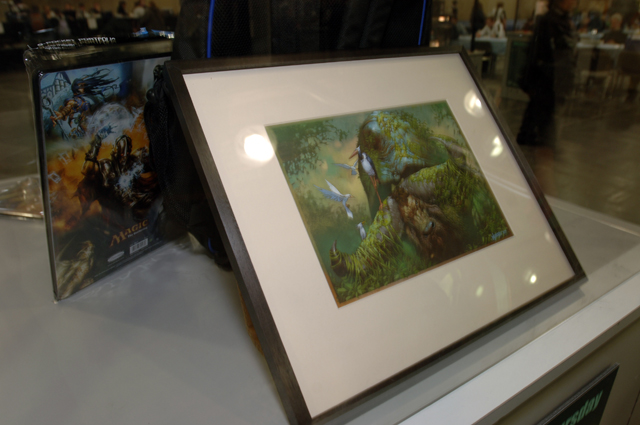 Other public event prizes include iPhones and other iProducts... 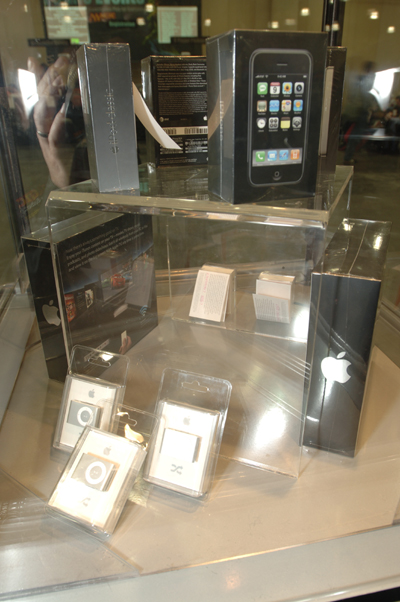 ...and, of course, the star of the whole public events show, the tricked-out Toyota FJ Cruiser. 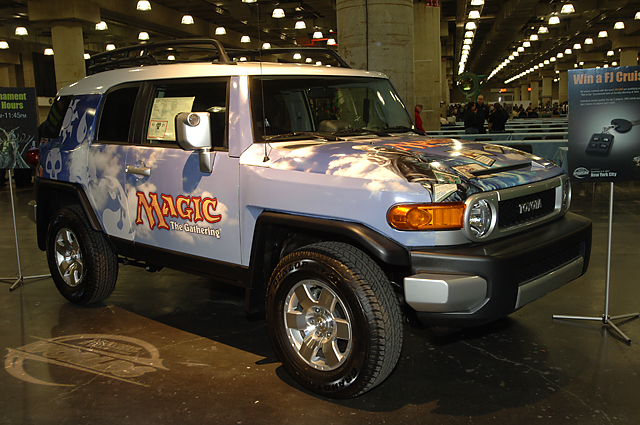 For those of you not able to make it into New York City for this weekend's event, let me leave you with one of the most beautiful sights in all of the Big Apple—a Katz's Delicatessen pastrami sandwich on rye bread with a side of potato pancakes. Dr. Brown's Cream soda not pictured. 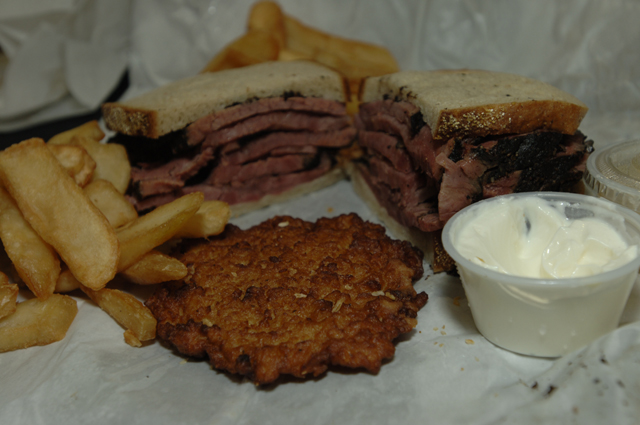 Tune in next week when we resume our regularly scheduled programming, which will undoubtedly include interviews with the World Champion and the Player of the Year. In the meanwhile, let me give you one more image to look at...December's Friday Night Magic foil. 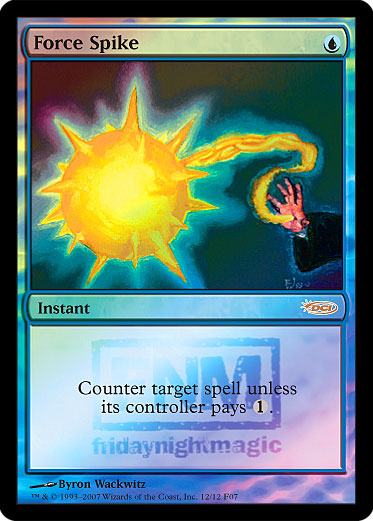 No Firestarter this week—feel free to use the forums to talk amongst yourselves!