Brian David-Marshall was en route to Pro Tour–Berlin over his usual deadline, so coverage reporter Bill Stark stepped in to give you an overview of some of the sights—and decks—you'll see this weekend. Enjoy, and be sure to check out the event coverage throughout the weekend here on magicthegathering.com
–Kelly Digges,magicthegathering.com editor

erlin. For a continent as old as Europe, it is rare for a city to have so much history above and beyond many of those around it. And yet, Berlin. What more can be said? The city virtually teems with historical significance, filled with museums, landmarks, and right down the middle of it all a memorial line that serves as a silent reminder of the wall that once defined the place. It makes sense, then, that the Pro Tour held within its confines would feature the Extended format.
After all, no other premier level format offers the same peek back through Magic's history. With the Pro Tour just hours away from starting, players are busy shuffling their Onslaught sac lands, their duals from the Ravnica block. But, like Berlin, today's Extended is impacted by modern history as much as the true past. A host of cards from the past few sets, most notably Shards of Alara, are promising to re-shape even in this late hour how Extended will play out. Before we look at decks, however, it's important to examine two major changes that have happened to Extended since the last time we saw it.

First and foremost, the biggest change since the last time we saw the Extended format is the rotation. As a result of DCI policy changes, Extended now rotates yearly just like Standard. It includes the seven most recent blocks of cards, signified by a large-set "standalone" like Shards of Alara and two smaller mini-expansions, like Fifth Dawn and Darksteel, and the three most recent core sets. That means the format for Berlin includes everything from Onslaught forward as well as Eighth, Ninth, and Tenth Editions.

It also means some previous favorites have rotated, shaking up the top decks of the format. Blue-green Madness? Gone. Cabal Coffers and Psychatog? Gone. Fact or Fiction? Gone. Gaea's Might, Orim's Chant, Cabal Therapy, Pernicious Deed, Meddling Mage? Gone, gone, gone, all gone. A multitude of cards that were critical foundations of last season's top decks will ride the pine in Berlin, paving the way for a whole host of new cards, decks, and archetypes to shine.

Earlier this year the DCI made the decision to ban the card from the format, effectively neutering the Counterbalance decks (known as some form of "Next Level Blue") that were all the rage during the last Extended season. Does that mean some brave souls won't try to combine the power of Counterbalance, Tarmogoyf, sac lands, and Vedalken Shackles in order to re-live the glory days of the deck? We'll know in a few hours, but suffice to say the lack of the Divining Top will significantly alter the landscape of the format.

Rumors abound that the new Extended is aggressive but fair. Decks can kill as early as the third turn, but the disruption available to players to combat such shenanigans is numerous and varied. On top of it all, Shards of Alara waits ready in the wings, adding a few hundred brand new cards to the format that haven't been tested and whose merits are truly unknown.

One of the decks that benefits most from the new gold set is a tried and true favorite: Affinity. The newly minted Master of Etherium is an absolute monster in the deck, Crusade the team while serving as a hefty beater itself. Thanks to Mirrodin's artifact lands and the fast mana starts revolving around Ornithopter and Springleaf Drum, the Master hits the table quickly and must be dealt with as soon as it does so. Also adding to the Affinity deck's status are Salvage Titan and Soul's Fire. The Fire adds a Fling-like affect to the deck allowing players to "go large" with an Arcbound Ravager, Atog, Master of Etherium, or Cranial Plating anything and punch through for the final points of damage outside the combat step. You know things are going well for Affinity when their preferred burn spell isn't even Shrapnel Blast. The Salvage Titan, which may or may not see as much play as Master of Etherium, is very easy to play, is a very large monster that can hit as early as the first turn, and provides a repetitive threat in the late game. All in all, Affinity's stock is definitely up. Gerry Thompson, Grand Prix-Denver champion and Starcitygames.com columnist, offered up this version of the deck just a few weeks ago.

As much as the robots have gained, however, there are still some powerful hate spells keeping it in check. Kataki, War's Wage, and Ancient Grudge are both waiting in the wings, as they have in many seasons past, to keep the artifact monsters contained. One deck set up particularly well to utilize such threats out of the sideboard? Zoo, which itself managed to pick up some big hits since the last time we saw it. Shards of Alara gives the deck the "best Rogue Elephant ever" in the form of Wild Nacatl, and a scare-free Phyrexian Negator by way of Woolly Thoctar. With a combination of Ravnica dual lands and Onslaught sac lands the Zoo deck's manabase is very solid, letting it play a 3/3 Nacatl early and a 5/4 Thoctar not long behind. Getting Figure of Destiny as an early game threat and a late game bomb doesn't hurt either, and rumors abound of Antoine Ruel's Invitational card, Ranger of Eos, hitting Zoo sideboards across the land as mirror tech (imagine paying four mana for a 3/2 that tutors up two 3/3s, or a 3/3 and a 1/1 that becomes an 8/8 super monster!). Pro Tour-LA finalist Billy Moreno came up with this list for an article on Starcitygames.com.

Also gaining a lot of steam from the last season are variations on Storm. Proving itself as a solid combo mechanic, many players thought the Storm decks of years past would surely be gone from the format with the passing of the Invasion era sac lands, whose comes into play downside quickly turned into upside as they could be sacrificed for a quick boost of two mana instead of one. That's not the case, and again is in part because of new cards from Shards of Alara. In particular, Ad Nauseam has created a lot of buzz providing a deck already packed full of cheap rituals, Lotus Blooms, and other spells a hefty amount of card drawing to fuel the critical turn (just make sure you don't flip too many Mind's Desires!). Lotus Bloom and Manamorphose combo alongside Rite of Flame, Seething Song, and Desperate Ritual to make sure critical mass can be achieved fast enough, and a large Tendrils of Agony ends the game when sent to the dome. Still, Gaddock Teeg, Thoughtseize, and Stifle force Storm players to work as hard as ever to get the job done. Here's a list from renowned deck builder Patrick Chapin:

The big question is what the rest of the format will look like. Will decks from the game's history find a way to resurrect themselves? Can Chameleon Colossus provide a big enough boost to Rock decks to make up for the loss of Pernicious Deed? Will something we've seen before reappear in a new form? Perhaps Tooth and Nail will be re-imagined by a Japanese contingent led by Shuhei Nakamura. Or perhaps the French Ruel brothers have managed to find a way to make the Urzatron viable once more, with new hits like Scourglass. We will know very soon, but one thing is certain: this Extended is shaping up to be one of the most exciting, highly anticipated formats of all time.

As many as 470 players are on their way to The Station in Berlin, giving this Pro Tour the potential to become the largest individual Pro Tour of all time. Because the event is so highly anticipated, there's no doubt you'll want to watch from home. The magicthegathering.com coverage team is happy to oblige! We'll be bringing you live updates from the event as it unfolds all weekend long. Check out photo coverage, video coverage, blogs, feature matches, and more.

To watch the Top 8 webcast, starring Randy Buehler and Brian David-Marshall, you'll want to tune in November 2 at 4:45 a.m. Eastern time (approximately 10 a.m. Berlin time). For the official announcement, visit this web page. For additional coverage of the event throughout Friday, Saturday, and Sunday, check out this link which will go live around 4 a.m. Eastern Time Friday morning (10 a.m. local Berlin time).

Of course, it would be cruel to enjoy the beauty and history of Berlin without sharing it with all of you, so as a special Pro Tour–Berlin bonus section, here are some of the sights the coverage team has had the opportunity to scope out over the past 48 hours. 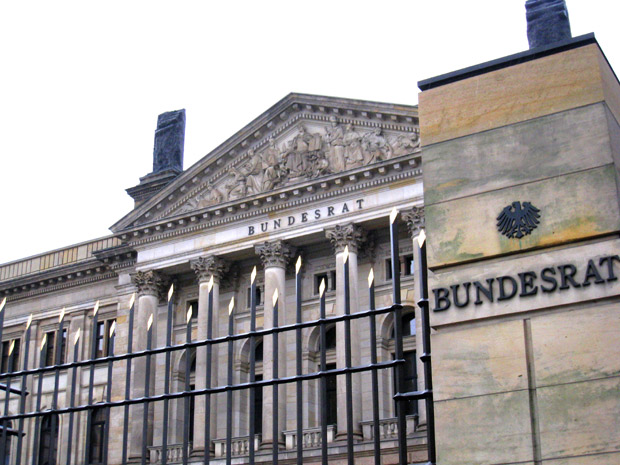 The Bundesrat, home of the upper house of Germany’s parliament. 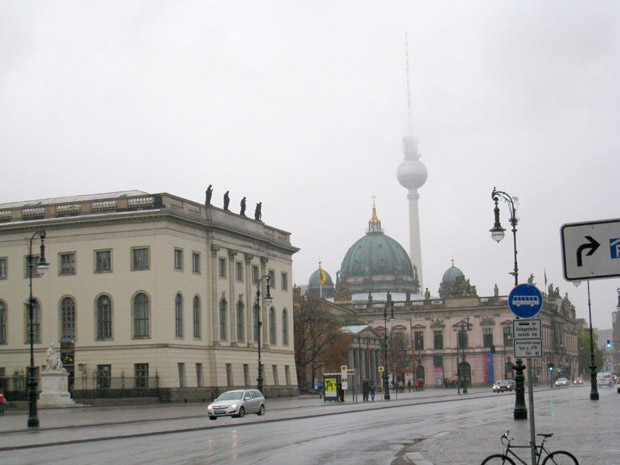 The TV Tower of Berlin, one of the tallest structures in the city. 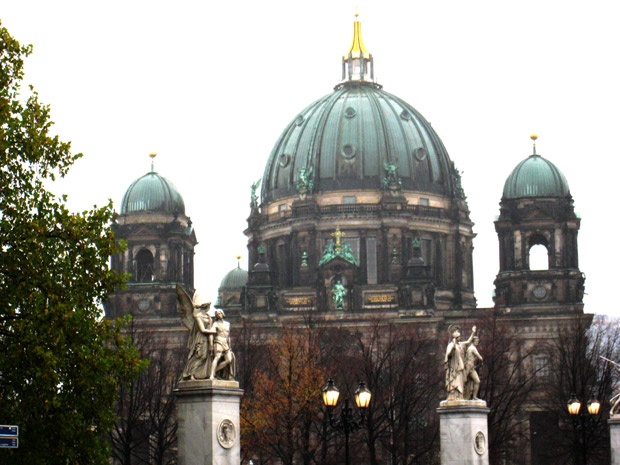 The Berlin Cathedral, the largest church in Berlin. 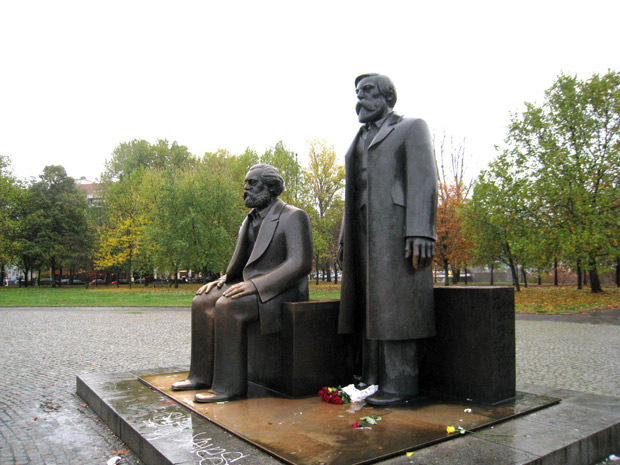 A memorial to Karl Marx and Friedrich Engels (ironically located directly across the street from a shopping mall). 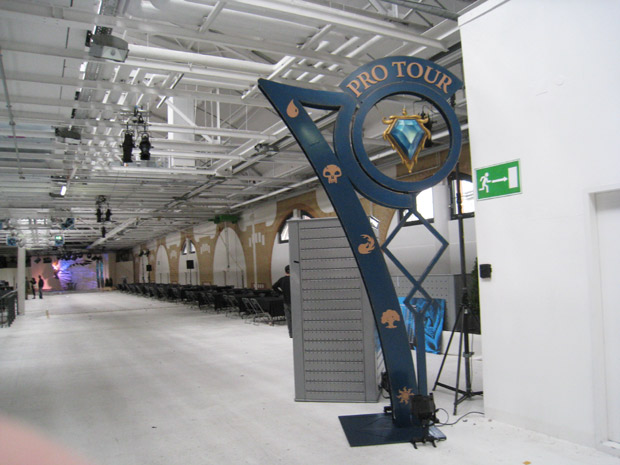 The calm before the storm…

What deck do you think will be the breakout hit of the weekend? Affinity? Zoo? Storm? Something unexpected? Sound off on your opinion in the forums, and check back all weekend long for round-the-clock coverage of Pro Tour-Berlin.