Pro Tour Born of the MOCS

he Magic Online Championship has become something more than just THE culmination of the Magic Online year. Season after season, we have watched players make the transition from dominant online player to Pro Tour standout. 2011 MOCS Champion Reid Duke has been the most consistent player to take that route, with Platinum membership in the Players Club, multiple Grand Prix wins, and his 2nd-place finish at the World Championship at the start of this season.

While Duke has been one of the most successful players on the Pro Tour, he has yet to experience the Sunday stage at that level of play—something that MOCS competitor Shaun McLaren crossed off his to-do list pretty early into his Pro Tour career. Not only did he cross off playing on Sunday, he crossed out all three of his Sunday opponents to become the Pro Tour Born of the Gods champion. With the 2014 Magic Online Championship looming on the horizon, given the fact that we have not checked in on the most recent Pro Tour winner since his win in Valencia, it seemed like a perfect chance to chat with McLaren about his win and the journey from digital cards to physical play. 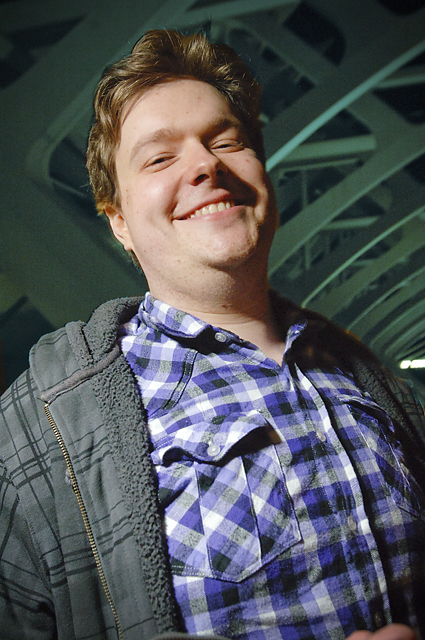 Coming into Pro Tour Born of the Gods, the number one topic of discussion was the ascension of the super team. Hall of Famers Jon Finkel, Kai Budde, Patrick Chapin, William Jensen, and company had taken their talents to ChannelFireball to form The Pantheon; ChannelFireball Prime was still in full force; and new teams were putting players into the spotlight all the time—Jérémy Dezani had won with Team Revolution and Craig Wescoe with Team Luxurious Hair. It seemed like a player working more or less by himself in the Canadian wilderness would be an unlikely choice for champion, but McLaren had the world's biggest playtest team at his disposal heading into Valencia.

"Modern is a format where just picking a deck you're comfortable with early and mastering it works really well, as opposed to focusing on trying to break it," said Pro Tour winner, McLaren. "Knowing how your deck and sideboard interacts with the rest of the field is crucial, and battling a bunch online exposed me to nearly everything that showed up at the Pro Tour, so it didn't feel like the big teams had an insurmountable advantage."

Speaking of sideboards, McLaren interacted with all his opponents on Sunday with one card in particular—a single copy of Threads of Disloyalty. I know many players who have won a Pro Tour will keep their decks from that event intact, hang their novelty check on the wall, and proudly display their trophy—but every now and then, a specific single copy of a card warrants a little extra tender loving care.

"The Threads was safely framed and retired and is on display as an example to the other cards that aspire to live up to that standard of performance," joked McLaren. "I didn't really know how important Threads was until afterwards, since it's harder to see the story when you're in it. In retrospect, it's absolutely incredible how it was crucial in each of my Top 8 matches as well as being the key card to close out the finals. If I were prone to anthropomorphizing I would name him Threadsy and we'd go on all sorts of wacky adventures together, and each night I would take him out of his sleeve and tuck him into bed. Until one day I wake up and Threadsy is missing..." 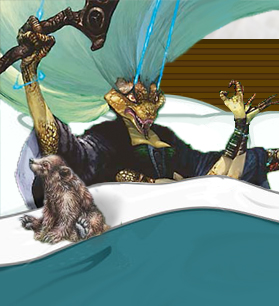 Thanks to playing on Magic Online, McLaren was already well versed in the Modern format as the Pro Tour approached, and he was able to hone in on the RWU deck that he ultimately won with. But you can have the best Constructed deck in the room and have it not matter if you are not able to make the cut at the draft tables.

"My main concern was, I have struggled with Pro Tour drafts in the past. As soon as Born of the Gods came out online I sat down for a week straight and did draft after draft. Sets have been getting released online earlier and earlier and hopefully that trend continues," said McLaren, of the preparation that carried him to a 6–0 record in his two drafts.

McLaren was already heading to the Pro Tour when he earned his trip to last year's Magic Online Championship, but the experience of being under the microscope of the coverage helped to steel him for playing on the Pro Tour—and the extra invition did not hurt either.

"I won a PTQ and a MOCS in the same season, which allowed me to string together a few Pro Tour appearances," he explained. "Having repeated chances is vital, since it's rare you're successful at your first few Pro Tours nowadays. Playing the MOCS is great practice for the Pro Tour. Playing high-pressure Magic while being watched will whip you into shape fast."

McLaren will be home watching the competition next weekend and hoping to see what some of the people he clashes with regularly look like in "meatspace."

"I love watching Magic coverage and can't wait to watch all weekend, probably while I try to earn some Qualifier Points myself," he said. "It's great to put faces to the names, since if you play a lot online you start to recognize the regulars but might not know too much else about them. I feel like the smart money for this year would be somewhere on Dmitriy Butakov (Butakov), Bing Luke (prolepsis9 ), Paul Nemeth (Zwischenzug), or Hannes Kerem (Paanika)."

McLaren was the February Player of the Month and when I announced that, I mentioned that I expected to see him in Montréal to take a victory lap and perhaps earn a few Pro Points toward his World Magic Cup captaincy for Canada—a country that turns out to be pretty wide—only to have him skip the event. 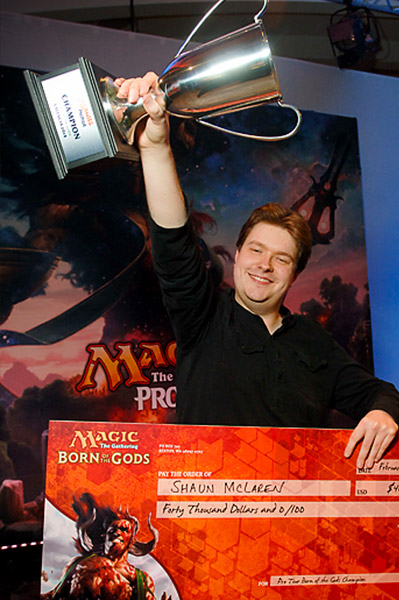 "What can I say, Canada is large and my huskies were tired," joked the Edmonton native, who chose to luxuriate in a rare Pro Tour security blanket courtesy of winning in Valencia. "It's nice to have a buffer of not worrying too much about Pro Points thanks to the automatic Platinum. Next year, I'll be travelling to a bunch of GPs to try and keep my ticket on the Gravy Train. My strategy has always been if I'm going to a big tournament I want to be maximum prepared and expect to win it."

I had the chance to interview McLaren prior to last season's Magic Online Championship and he spoke about his brother Dean, who has also played on the Pro Tour. McLaren assured me that his brother was up and watching every moment of the Top 8 starting at 2 a.m. Edmonton time.

"His message to me when I won was 'Not bad ;).'" said the younger McLaren sibling. "I owe a large chunk of my success at Magic to him, since having someone to share ideas and play with is crucial to growing as a player. There is no person I want to test with more for an event than my brother and I hope he qualifies again soon."

McLaren, who plays as ArsenalMunch online, had his Magic Online handle bandied about often during the Pro Tour webcast—it is an anagram of his name—and I wondered how he was treated on the platform in the wake of his win.

"Obviously, lots of virtual congratulations. It's also about what you don't see, which is less raging from tilted opponents. Hopefully that's because they're reminded 'Hey, I know there's a human being that I saw out there on the other side of the screen,'" he said before adding: "Though some people still have the audacity to kick my butt in Daily Events even though I won a Pro Tour."

As you may have noticed throughout my conversation with him, McLaren is an inveterate joker, but he takes playing Magic very seriously and offered some advice to the players who will be seated around the rings of computer monitors next weekend.

"The barrier to transition between Online and Live Magic is mostly mental. My big advice would be to prepare seriously and have fun. Find what works for you and do it. The Championship is an incredible opportunity to make a name for yourself, and right up there with Worlds and Pro Tours for the most awesome Magic events, win or lose," said the Pro Tour Champion. "If any of the competitors are looking for a leg up I actually wrote extensively about my MOCS preparation and there might be some nuggets of wisdom there."

Shaun McLaren will be watching all weekend. What about you? The event will be getting full video coverage with me, Marshall Sutcliffe, and a pair of Pro Tour Hall of Famers—Randy Buehler and Luis Scott-Vargas—in the booth, while Mike Rosenberg mans the text duties. Coverage is going to kick off at 10 a.m. PT on Friday and we have some cool new features in store for you in order to bring you as much of the action as physically digitally possible.