hat a crazy weekend for Magic! Highlighted by a record-shattering attendance for Grand Prix–Madrid, the weekend saw close to 5,000 players taking part in Magic tournaments this weekend at the PTQ, $5K, or Grand Prix level—and that does not even begin to take into account people on Magic Online, at Friday Night Magic, or in local tournaments. 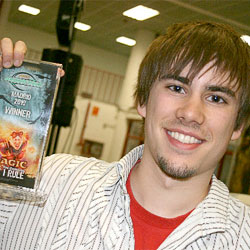 Andreas Müller The headline event was clearly the Legacy format Grand Prix–Madrid, which obliterated previous high-water attendance marks with 2,227 players taking part in the event. When Legacy events were first added to the Grand Prix schedule there was some doubt as to whether or not they could match the numbers of GPs that utilized more widely accessible formats. The events had some modest numbers to begin with, but they have climbed steadily and it is now up to Limited, Standard, Extended, and whatever else to play catch-up to Legacy in the attendance game. With high-profile Legacy events happening almost every month and spawning deck lists, articles, and coverage, the curtain has been pulled back on the format, and players have come to realize they can play anything from Ad Nauseam to Zoo—just look at the Top 8 decklists.

The winning decklist was Reanimator played by Andreas Müller of Germany, whose previous best finish at a premier level event was a Top 16 at Pro Tour–Berlin—or should I say the losing deck list was Ad Nauseam? In the deciding play of Game 3 in the Finals, David Do Anh of Prague was at 19 life when he cast Ad Nauseam for what was presumably the killing blow of the event. A precision Daze from the Reanimator player meant that Do Anh had to find a Lotus Petal or Chrome Mox while digging through his deck in order to go off, as he was forced to sacrifice his Lotus Petal on the table to pay for the Daze. Here is how the top of his deck nibbled away at his life totals:

Finally Do Anh's deck delivered the kill in the form of Tendrils of Agony—causing the Czech player to lose his final four points of life—ensuring the Grand Prix title would go Germany's Andreas Muller with Reanimator. 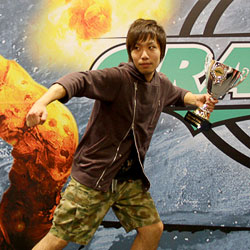 Tomoharu Saito also pushed through to the Top 8 playing an Ad Nauseam deck, becoming the first Japanese player to notch a Top 8 berth at a Legacy Grand Prix. (That basically leaves winning U.S. Nationals as the only thing remaining for a Japanese player to accomplish in high-level play.) It was also his second Grand Prix Top 8 of the season and puts him at 15 Pro Points for the season—squarely in the middle of the Player of the Year race for the title he has said he would like to reclaim this season. It was the fifteenth Grand Prix of his ten-year career. Saito is Hall of Fame eligible this season—as does Gabriel Nassif. There has never been a tandem of players performing at this level entering their first year of Hall eligibility.

There was another record set this weekend in Madrid. Sven Dijt's second career Grand Prix Top 8 finish gave him the longest span of time between Top 8s for any player in the history of the game. I don't even need to consult any spreadsheets or DCI files to confirm that, since his two Top 8s come in the first ever Grand Prix and the most recent, with 12 years and 11 months separating the two finishes. I interviewed Sven about his first Top 8 a couple of years ago at the most recent Grand Prix–Amsterdam. In that interview he talked about being better than many of the other players at that time due to playing regularly at a local cafe. Serendipitously, that cafe was just featured in the WPN Spotlight in this column a couple of weeks ago. 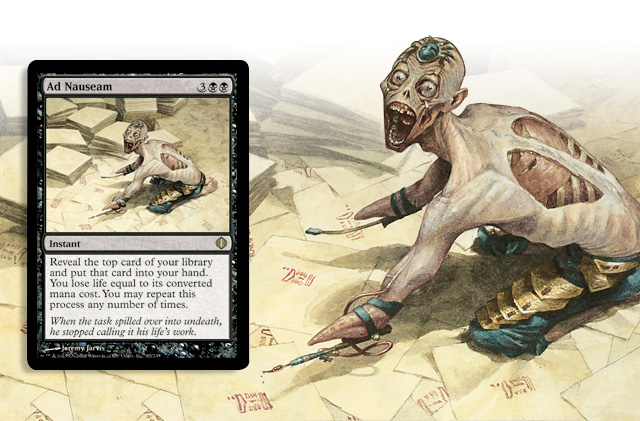 While multiple thousands of players were shuffling up their Legacy decks in Madrid, StarCityGames.com was setting their own attendance records, with 561 players taking part in the Standard $5K event on Saturday. New Yorker Alex Bertoncini won his fourth SCG $5K title against the biggest field in the series history. It was another Jund-on-Jund affair in the Finals, with a couple of Boss Naya decks, three Vampires, and a third copy of Jund rounding out the Top 8 bracket. You can find all the Top 16 deck lists here.

On Sunday 236 players broke out their Legacy decks—bringing the weekend Legacy total to close to 2500 unique players—and fought for another $5K. Tariq Zahzam won that event with Mertfolk, one of six copies of that archetype in the Top 16 of the event. While there was some overlap between the two Legacy Top 8s this weekend, there were multiple archetypes unique to each event which says something about the diversity of the format. The huge card pool that lets players to play with their favorite archetypes from throughout Magic's history is clearly a huge draw for Legacy.

In addition to those events, there were approaching 1800 players taking part in PTQs throughout the world. Legacy and Standard are all well and good, but Extended season is the one that is on every aspiring Pro Tour player's mind these days. And if you want to talk about wide open formats, then you need look no further than last weekend's PTQ results. No fewer than seven different archetypes took home blue envelopes this past weekend, including an old Extended classic we have not heard much from in recent days. You can find all the deck lists in Decks of the Week, but check out this oldie but goodie from Fargo, North Dakota—now with main deck Blood Moon!

Like I said, it was a crazy Magic weekend. Where did you play Magic this weekend? Head to the forums and share your stories. Whether it was GP–Madrid, Friday Night Magic, or just your kitchen table, we want to hear from you. 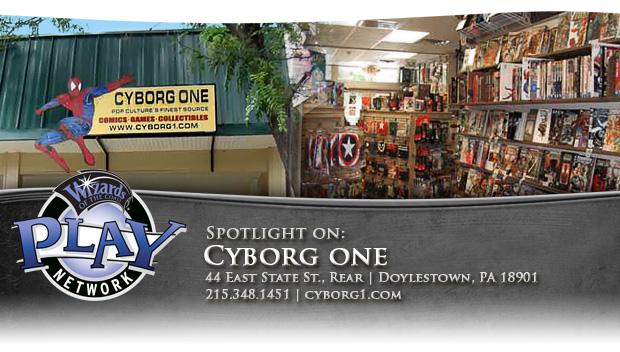 Players all over the world will have a chance to compete for the title of Worldwake Game Day Champion at their local Wizards Play Network locations this weekend. The format for Saturday's Game Day is Standard, and everyone who participates will get an extended-art Hada Freeblade promo card. The players who advance to the Top 8 will also get an extended-art Kalastria Highborn, and even if you don't do well you will have a chance to nab one of those promos, since each location will have two copies of the card to give away as random door prizes. You can see the Worldwake Game Day Champion certificate in yesterday's Arcana.

One of the stores that will be hosting Worldwake Game Day is Cyborg One in Doylestown, Pennsylvania. Their event starts at 6 p.m. and costs $10 to enter. The winner of their tournament will receive a booster box of Worldwake in addition to the other prizes. For specific information about any Magic Game Day event, you can find your nearest Game Day in the event locator and contact the WPN organizer for the event. 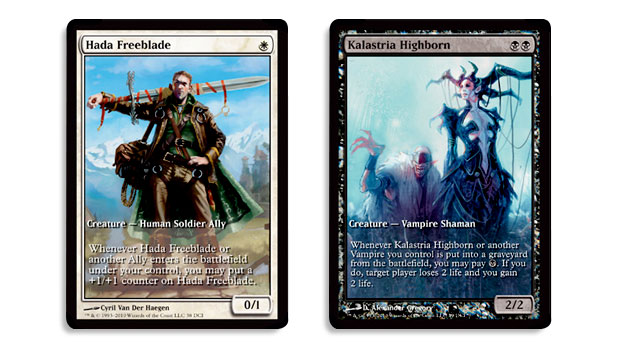 I spoke to James Frazier from Cyborg One about the WPN program and running Magic events in general. His store has been in business since 1993 and carries both games and comics, but it is only the latter of half of the past decade that the store began running Friday Night Magic events. With the rapid growth of those tournaments, James was wondering why he didn't sign up sooner.

"We'd done release events for a number of years, but formally started FNM about five years ago. It's built up through word of mouth from a small cadre of 6-8 to a small-scale riot of 25-45," said James. "Our release events were sort of on automatic pilot when I started at the store, but FNM got rolling when some gamers whose store had closed approached us about resurrecting their group. Long story short, it worked!"

Magic has continued to grow at the store. They recently had 55 players for their Worldwake Prerelease event and they continue to add events to the schedule.

"We don't make prize payout too top-heavy, either; you want to reward new folks for doing well, even down in the rankings a little," said James of how he keeps players coming back. "We always try to keep our venue bright and clean, whether we're running it in-store or renting a room from the local high school. Recently we started running Elder Dragon Highlander events as casuals, and we give away a gag prize every week: Spam, fake moustaches—anything to keep it random and fun!"

If you happen to find yourself in Doylestown for Game Day, don't be surprised if the lights start flashing—it's nothing to be alarmed about.

"Sometimes the gang will request that we play the Mortal Kombat movie theme song while announcing pairings," James explained. "One day we got the bright idea to flip the light switch on and off super-fast while playing it, light-switch rave style."

If you want to test out your deck before Saturday's Game Day, what better way than at Friday Night Magic? Players at FNM in March will have a chance to win this foiled out bad boy .... 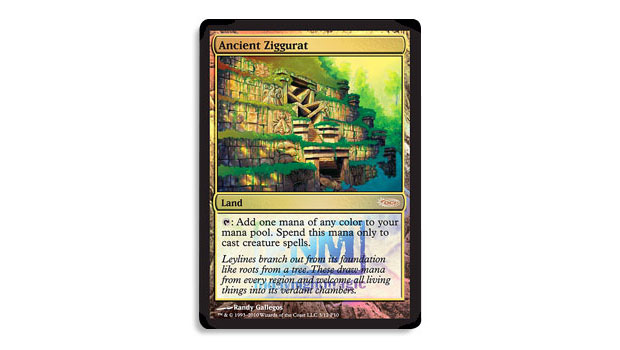 Ancient Ziggurat was prominently featured in Brad Nelson's 9th-place Block Constructed deck from PT–Honolulu last season and has been used in modern Jund decks to support Sedraxis Specter. I have been thinking about playing it in Constructed Allies decks and have played it in EDH decks built around Slivers. Here is the Nelson deck:

Good luck to everyone playing in FNM and Game Day this weekend!