his past weekend I had the pleasure of being a guest of Star City Games as a gunslinger at their big Rise of Eldrazi Prerelease in Richmond, VA. Originally, I had been scheduled to gunsling for their Worldwake Prerelease but I got snowbound in Seattle. Pete already had scheduled Mike Turian for this event but asked me to sling alongside him. How could I say no to a day of Magic with one of my all-time favorite players? The event was terrific and Nick Saban, who was running this tentacle of the Star City Games Prerelease octopus, was a gracious host who made sure that Saturday went perfectly for players, judges, and gunslingers alike. I played in the first flight of the day and went 3-1. This was my pool:

And here's the deck I made:

I lost one of my four matches to a brutal Consume the Meek that was pretty much a one-sided Wrath of God in Game 3 of Round 3. In my other three rounds the most valuable cards in my deck were Nomads' Assembly, Bloodthrone Vampire, and my pair of Pawn of Ulamog. Bloodthrone Vampire was one of the cards I was on the fence about while building the deck, but it turned out to be a closer for me in almost all of my games. Even if it did not strike the killing blow, it would force my opponent to make a bad block every turn—being able to sacrifice a creature with a Pawn of Ulamog or two on the battlefield felt pretty unfair—and soften things up for an all-out attack. Besides losing a creature a turn to my Bloodthrone Vampire, my opponents also had to contend with a fully leveled Guul Draz Assassin dismantling their defenses.

Nomads' Assembly was another card that I was unsure about, but after playing with it I am very impressed. It may not seem like much to make four tokens, but when you make another eight the next turn on the rebound it gets a lot better. In one game, both of us had cast turn-one Soul's Attendants and settled in for long games. I eventually won it with Nomads' Assembly giving us both a double-digit boost to our life totals before taking it away with a fully leveled Kabira Vindicator making all my Soldiers into 3/3s.

I would love to tell you how good Gideon Jura was, but most people just scooped when I played it. I will have to get back to you on that guy.

There was a lot of talk about all the different new mechanics and themes in the set, but the reintroduction of Invokers was a big factor in many of the Limited games that I played that day. Dawnglare Invoker was a great creature that I would have been perfectly content with as a 2/1 flyer, but I was also able to close out multiple games by tapping an opposing army. I have played with all five of the Invokers since then and have found them all to be perfectly serviceable. The two best ones for me so far are the Dawnglare Invoker and Wildheart Invoker because they are the best creatures on their own, but I have had games where I was playing with the Lavafume Invoker and plenty of Eldrazi Spawn generation. Even without eight lands, I have attacked with everyone—including 0/1 Eldrazi Spawn—and then sacrificed the blocked ones to pay for the +3/+0 bonus to all my creatures that Lavafume Invoker offers. It does not take many unblocked Spawn to close a game that way. 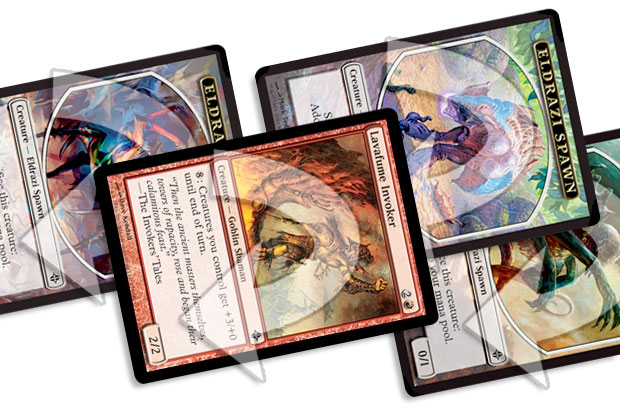 Two other cards that I was pleasantly surprised with in this card pool were Kor Line-Slinger and Bala Ged Scorpion. While there has been plenty of talk about all the big creatures in Rise of Eldrazi there were abundant targets to tap with the Slinger ranging from the mana denial of tapping Overgrown Battlement on a player's upkeep to the tempo advantage of tapping a level up creature in response after an opponent had paid to make it big. I expected to side the card out a lot but it was good in every match-up I played on Saturday. My Bala Ged Scorpion ran out of space for notches after stinging so many Line-Slingers on Saturday that it lost count. It was good against Walls, and I even used it on the occasional Eldrazi Spawn token to keep my opponent off of monster mana.

Looking back on the card pool several days—and many games with Rise—later, there are a handful of things I would do differently. For one, I should not have played Harmless Assault. I thought the card would be a great combat trick but the reality of this new format is that I was using so much of my mana every turn that it was just clogging my hand most of the time. I also don't think I had enough Eldrazi enablers to play either of the nine-drops that I played. They were both fine for me, but clumsy to ramp to in this deck. I would like to have cut them and the Harmless Assault for Prophetic Prism, Flame Slash, and Staggershock—along with a couple of Mountains.

I had bomb rares in as couple of different colors, but none of them were more exciting to me than Gideon Jura and it certainly pushed me over the edge to play white. Guul Draz Assassin turned out to be the bigger bomb of the two for me over the course of the day. Levelers, overall, turned out to be waaaaaaaaaay better than I was prepared to believe coming into the event. I don't think I gave my pair of Venerated Teachers a second glance while building my pool, and I was certainly unexcited by my triple Halimar Wavewatch.

I think most people who have played with levelers have quickly come to realize how good Venerated Teacher is when paired with a critical mass of cards featuring the new mechanic. If you have not played with Halimar Wavewatch because you were unexcited about the first two levels of wavewatching that are devoid any power, then I urge you to give them a try. It does everything you could want from a creature card in Limited. You are easily able to fend off your opponent's ground attack with an 0/6 body while you set yourself up for the long game. The Wavewatch is amazingly easy to level up—yes, it takes twelve mana to make a 6/6—and when you do it can end a game very quickly. 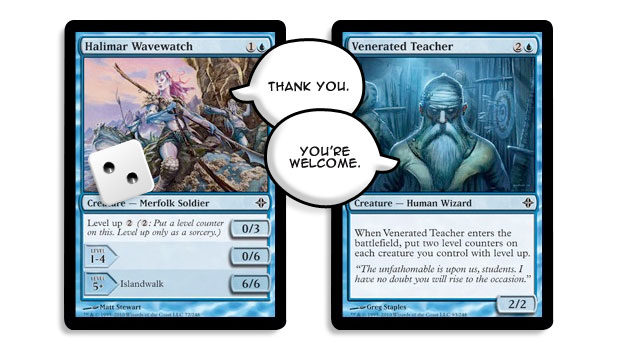 I wonder if I was not supposed to play the deck as blue-black or blue-black splashing red. The blue-black version would have looked like this:

After the event I had the pleasure of hanging out with Mike Turian and Bennie Smith for drinks and a game of EDH. I had a mono-blue deck with me that used Kami of the Crescent Moon as the General, and it came down on turn two ensuring a steady flow of cards for all three players. I had slipped my Emrakul, the Aeons Torn Prerelease foil into my deck, and I was hoping to get a chance to cast it. Everyone was pretty happy with the extra cards until I started doing stuff like stealing their creatures and bouncing their teams. Eventually both players decided they had enough—both of cards in hand and me tapping Islands—and turned their attention to killing me. It was a fun night despite getting ganged up on and not drawing my Eldrazi.

I flew home Sunday morning and found myself in New York City with time on my hands before I had to meet someone, I decided to check out the Sunday Prerelease being organized by WPN Organizer Alice Goguen under the Brooklyn Gamers banner. I became aware of Alice's events late last year when mutual friend Chris Pikula introduced us since Alice was hoping to open a gaming store in Williamsburg, Brooklyn, and I had experience running a store with Neutral Ground. Alice has been ramping up to a store by running a weekly Friday Night Magic event in Brooklyn and taking part in the Prerelease program. For Rise of Edlrazi the Brooklyn Gamers crew rented a space in downtown Manhattan and took a stab at running a larger event. It was a huge success, with over 90 players cyclying through Sealed Deck, Two-Headed Giant, and drafts. There were also enough new players to ensure that Alice will qualify for Advanced Organizer status.

I signed up to play in their first flight and hoped to get as many rounds in as possible before I had to leave. Here is the pool I got:

And here is the deck I built:

I reaaaaally wanted to play blue-red to take advantage of my three Mnemonic Walls, two Heat Rays, and two Staggershocks. Had I realized how good the Kiln Fiend was I would have played both of them and tried for that deck. As it was this deck had little difficulty going 2-0 and dropping with a couple of packs under its belt. I should have played both Kiln Fiends and the second Wrap in Flames, with Wall of Omens and Guard Duty sitting on the sidelines. I headed off to my afternoon appointment ... 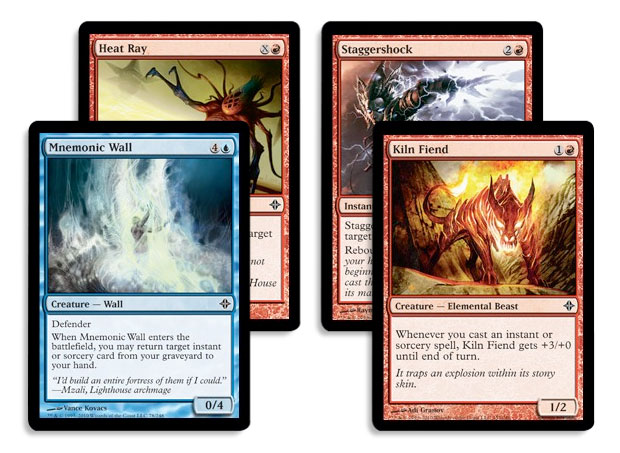 ... an 8-player draft with local players using packs won at various events, earned for gunslinging, and for judging. I have gotten a couple of drafts in as of this writing and have fallen in love with the blue leveler deck. Here is one example of a recent deck that did very well for me, losing only to AJ Sacher while beating fellow author Jacob Van Lunen and Lan D. Ho. 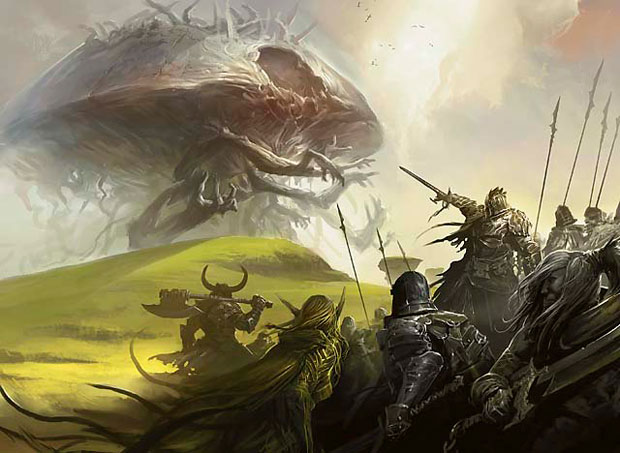 I wish the deck had one or two more common levelers but it was still one of the most fun decks I can remember drafting. Having a fully active Echo Mage with double Regress and double Oust is tons of fun, but where the deck really shone was in the red zone with Time of Heroes. My 4/5 Knight of Cliffhavens, 4/4 Skywatcher Adepts, and 4/5 Echo Mages don't have to attack many times to end a game. I had one game against Jake—and his double Pestilence Demon deck that went like this:

Having seen my Sealed decks, and what I did and did not play, what would you have done differently? Feel free to let me know in the forums. And good luck to everyone headed to a Launch Party this weekend!