For The Sake of Argument

appy New Year, everyone! A new year that will get even happier next week when we delve into previews for Born of the Gods and start to mark the days until the first Pro Tour of the calendar year. Before we look ahead, I'm going to take this week to look back and finish up one last bit of bookkeeping from 2013.

Starting with the month of August, we began naming a Magic Player of the Month in this column and have yet to determine the results from December's tournaments. I will get to the nominees in just a bit, after which I will need you to chime in on Twitter, using the hashtag #MTGPoM, with who you think should be the last Player of the Month from 2013. First, for the sake of argument, I'm going to look back at the first seven months of 2013 and highlight the players I feel should have won the award.

Jon Stern took down the 1,646 person field at Grand Prix Atlantic City with a Bant Auras deck that paired a Spectral Flight–wielding Geist of Saint Traft with a Silverblade Paladin to take down eventual Player of the Year Josh Utter-Leyton in a mirror match finals. This came after taking down former Player of the Year Brad Nelson in the semifinals. There were a handful of Grand Prix throughout the month in four different formats, but no one had a tougher path to the trophy than Jon Stern. 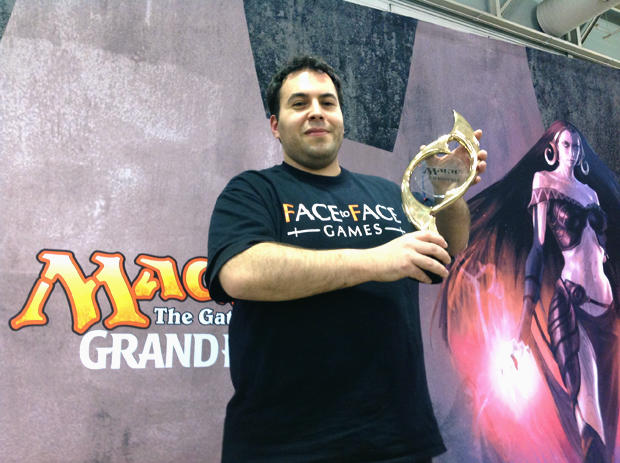 Three Grand Prix and a Pro Tour took place in February, and the matchup for the month came down to Pro Tour Gatecrash winner Tom Martell and Pro Tour Gatecrash semifinalist Ben Stark, who also made the Top 8 of Grand Prix Charlotte (with an honorable mention to Tom Martell's scarf). In the end it is hard to dislodge a Pro Tour winner from the top spot in a month—although that did happen with Sam Black and Jérémy Dezani during the latter half of the year. Martell piloted The Aristocrats past a bracket of Melissa DeTora, Eric Froehlich, and Joel Larsson to earn the first Pro Tour victory of his career. 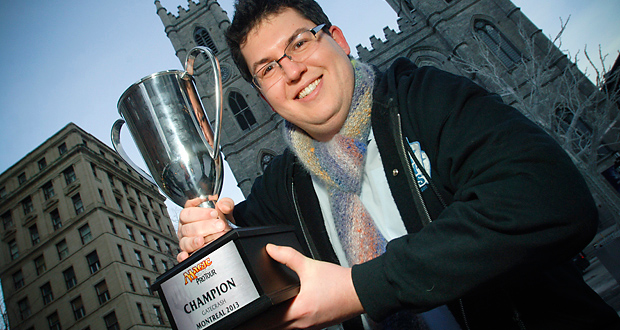 Eric Froehlich followed up his Pro Tour Gatecrash Top 4 finish with an impressive March run that saw him make the Top 4 of two different Grand Prix in two different formats. Froehlich took a Modern Jund deck in San Diego to a 3rd place finish and then closed the month out—just one weekend later—in Pittsburgh playing Gatecrash Limited. It was his third semifinals finish since the release of Gatecrash. While the previous month's Pro Tour should not factor into the next month's, his dominance in the wake of the set's release made it hard to give the award to any single winner of a Grand Prix or to Magic Online champion Dmitry Butakov. 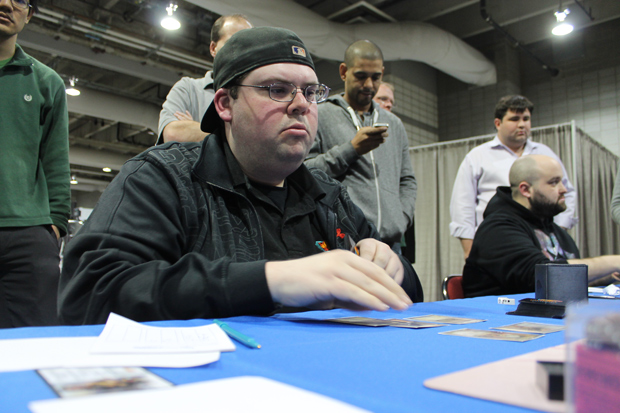 How fitting is it that April's one major PT season event was won by a player with the Legacy deck known as Death and Taxes? Ignore any interruption in the narrative that may come from the player being Danish and the event being Grand Prix Strasbourg in France. The deck was utterly dominating, putting two Danish players into the Top 8 of the 1,365-person tournament, and losing only in the semifinal mirror match. In the end, Thomas Enevoldsen won the tournament and the unofficial Player of the Month award. 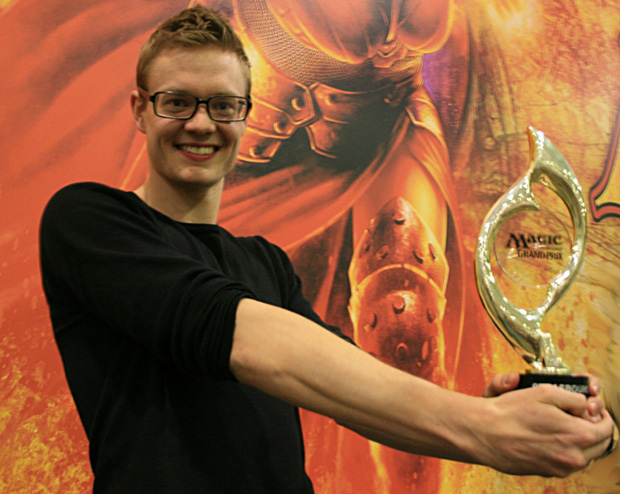 Craig Wescoe has been playing Magic longer than most of the people reading this article, but his career has really kicked into overdrive in the past several years, starting with his Pro Tour Top 8 debut in San Diego. Since then, he has added two more Top 8s in the state of California, highlighted by his win last year at Pro Tour Dragon's Maze. As with Martell's PoM in February, Wescoe needed to get past Josh Utter-Leyton en route to his trophy (don't feel too bad for Josh—he does win the actual Player of the Year title with his finish). Wescoe got to the best finish of his career playing a Selesnya Aggro deck that was able to recover impressively from even the most Supreme Verdicts. 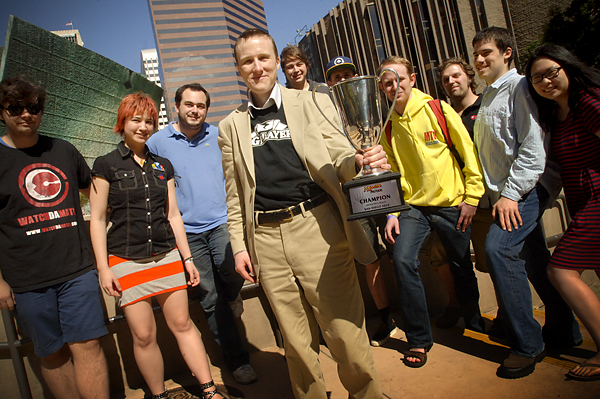 Few players made as immediate an impact on the tournament scene as Brad Nelson when he debuted just a few years ago at Pro Tour Honolulu. He won a Player of the Year title a year later but seemed to get burned out from the unrelenting pace of his early pro career. He took a breath and stepped away to focus on his career, working for StarCityGames as a content creator. But, as any Magic fan knows, that competitive fire will always flare up again. While he did not win Grand Prix Miami with his Junk Aristocrats deck, it earned him a Pro Tour invite and was his second strong finish of the month, after his win at the SCG Standard Open in Baltimore. 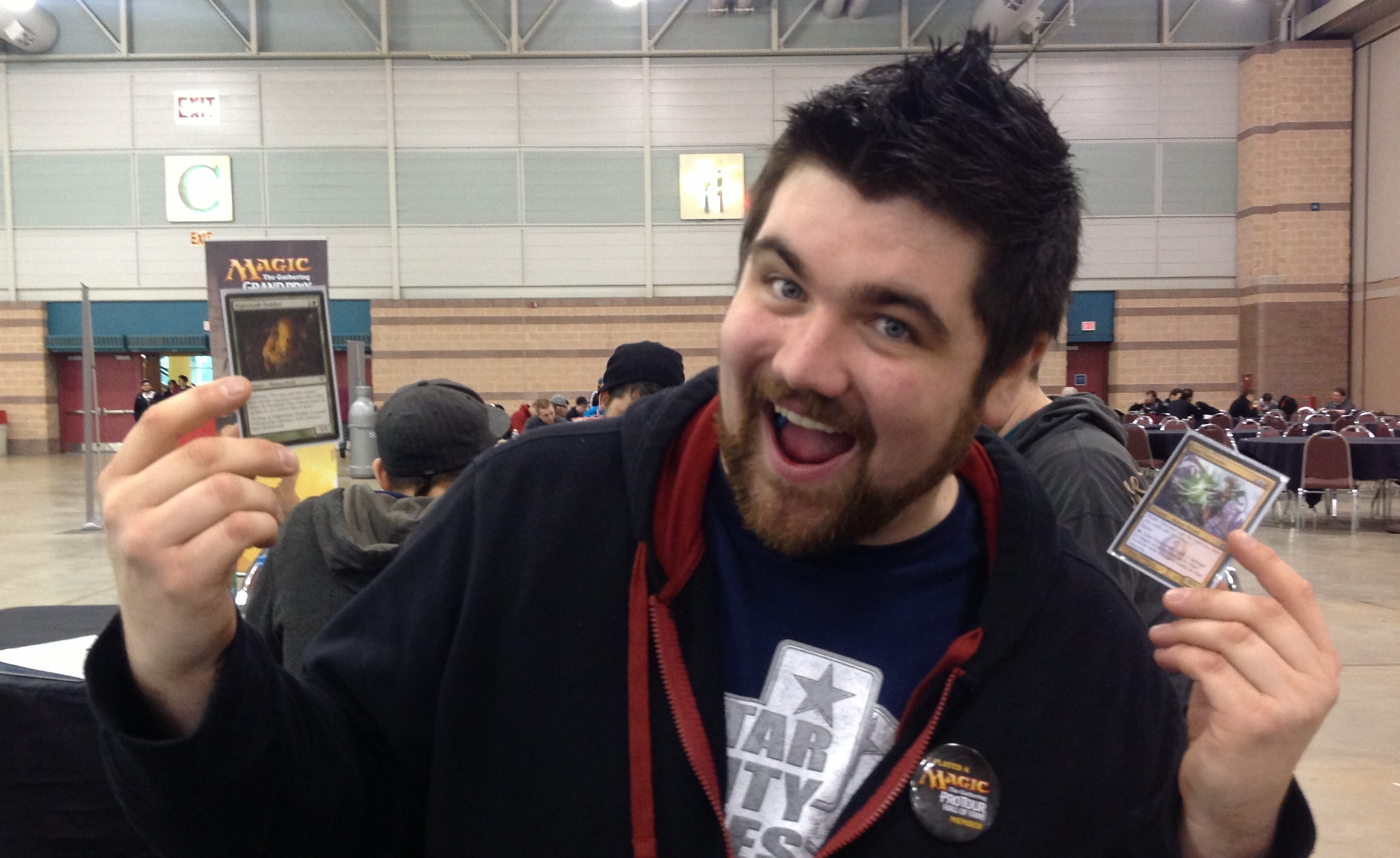 It was really hard to NOT give this mock award to Alexander Hayne. When you wear a cowboy hat while winning a GP on your birthday, it becomes pretty hard to look elsewhere, but Jacob Wilson earned the nod for me in July with his Top 8 finish at GP Calgary coupled with his win at the StarCityGames Legacy Open in Worchester. As we head into the new year, Wilson is on my short list of players to watch in 2014. He has been a dominant player on the Open Series in Legacy and showed he knows his way around a Standard control deck as well.

The Player of the Month award started in August, with Shahar Shenhar taking the first one via his World Championship title. As I mentioned at the top of the article, we still need to award the December title and I have a handful of candidates. Using the hashtag #MTGPoM you have a little less than a week to engage in discussion about who you think should earn the title and why. I will announce the winner based on your persuasive arguments—and your arguments have definitely influenced the outcome in months past—in next week's article.

Here are the nominees (all win totals include byes):

Seth Manfield went 26–5–2 across two Grand Prix—Dallas/Fort Worth and Toronto—and finished in the Top 8 of each of those December events. He played Standard and Limited with equal aplomb and is another young player poised to break out in 2014.

Ari Lax won Grand Prix Toronto—the only event he played in December—going 16–2–0 along the way. Lax displayed a MacGyver-like ability to extricate himself from that Top 8 with the Magic equivalent of a piece of string and stick of gum—Bronze Sable and the Loathsome Catoblepas.

Poland's Marcin Staciwa won Grand Prix Vienna with Mono-Blue Devotion. He played in that event and a PTQ in December with a cumulative record of 18–5–2. The bulk of those losses came in the PTQ, since he only lost one match throughout the entire GP weekend and started off the event with a 12–0 run.

Mexico's Marlon Gutierrez—who was 26–10–2 on the month—had a tough enough time just getting to the event with the ice and snow that locked down Dallas/Fort Worth on the Grand Prix weekend. That was nothing compared to the gauntlet that faced him once he reached the Top 8 of that event. Seth Manfield, Ben Stark, and William Jensen all have Grand Prix trophies, and the latter two are also Hall of Famers with Pro Tour trophies on their mantles. Resumes notwithstanding, it was the Orzhov Control deck and the relatively unknown masters student who were the last ones standing.

Japan's Ryo Nakada was one of 1,800 people in the room for Grand Prix Shizuoka. While the decks most commonly being filled out by the other 1,799 competitors were for Mono-Blue and Mono-Black decks that had been dominating the Standard format in previous weeks, Nakada was packing an innovative Orzhov Aggro deck with Xathrid Necromancer. With only one bye to his name, he went on a 12–0 run before losing a mirror match on Day Two. Nakada went 19–4–1 on the month, playing in just the GP and a GP trial.

Pro Tour Hall of Famer William Jensen went 37–13–2 in December, playing more Magic than anyone else in contention for this month's award. He is not listed here based on quantity, though, as the quality of his play carried him to a pair of Top 8 finishes at the Grand Prix level. Formats don't seem to matter to Jensen, who made the Top 4 of Toronto playing Limited and Dallas playing Standard. The man has been on fire since his overdue Hall of Fame induction and he is the person I am most excited to watch in 2014.

Max Brown rounds out the candidates with his 31–13–4 record in the month of December. The relevant portion of those wins came en route to winning the StarCityGames Invitational. He played Mono-Black Devotion in Standard and Omni-Tell in Legacy with a 15–2–2 record across the two formats.

There you have the nominees. Now the job falls to you to hop on Twitter and tell me who should win the award and why. You can find me at @Top8Games. You can also engage with @magicprotour—but make sure to use the hashtag #MTGPoM and I will find the discussion. I will post the winner in the next week's column along with something else you might just be interested in seeing.