Do you want to earn an invitation and plane ticket to Pro Tour-Kobe? Find a Pro Tour Qualifier near you, get out and play – the season runs until August 27.

was really hoping that this week's column would either be about me qualifying for Kobe or, at the very least, a story about my near miss in the final round of Swiss or Top 8. I did manage to attend the PTQ, which is better than my last attempt to qualify, but from there things took a turn for the worse.

I can't even blame it on the deck. I was pretty happy with the card pool I received, which featured Niv-Mizzet, Dimir Guildmage, and a couple of additional pingers. I quickly lost two rounds and was relegated to the sidelines to cheer on my Top8Magic.com intern Steven Sadin. Steve had also taken a first-round loss but never questioned that he was going to win the PTQ – and did not let himself down in that regard.

When all said and done, Steve qualified for Kobe – and won the free airfare that had made it prohibitively expensive to attend Japanese PTs in the past. I managed to steal a few moments away from Steve's playtesting to do a quick interview with him before we both headed off to Charleston – me for coverage, and Steve as part of a team with Paul Jordan and magicthegathering.com's own Mike Flores. 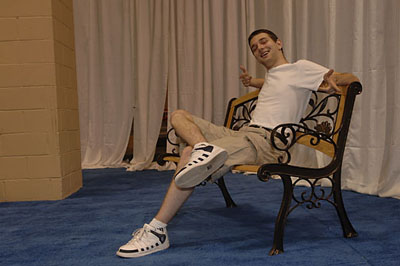 Steve adjusts to the Pro Player lifestyle in Charleston.Sadin has been a fixture on the New York Magic scene since he first wandered into Neutral Ground and purchased a blue-white deck to do battle with in the NG/YMG Grudge Match series. Recently he has become osmosed into the Jon Finkel draft group and is one of the most sought-after teammates in that highly competitive circle of players.

BDM: You started the tournament with the dreaded 0-1 start and then followed up with a loss in Game 1 of Round Two. How do you stay positive going into that second game and how did you keep that energy going for the remainder of the tournament?
Sadin: My experience playing Magic in high-pressure situations has made me mostly immune to going “on tilt.” I've been playing very well, and all that I can hope to do in a 100-some-odd-person PTQ (or pretty much anything where any level of competition is involved) is to give it my all and, assuming I'm able to keep my cool, a decent share of the time everything will fall into place and I'll walk away with the gold.
As for keeping myself going physically, I try to eat something with a sizable amount of calories after every round, be it a sandwich, a pretzel, or even worst comes to worst, some form of pre-packaged snack food. This allows me to concentrate far better than I would be if I were, say falling asleep during and between rounds because my blood sugar was too low.

BDM: Looking at your Sealed Deck card pool, I am curious about the different configurations you considered and how tempted you were to simply include all the good cards and let the mana sort itself out. How close did the Ghost Council come to making the cut and how do you resist the temptation?
Sadin: I was pretty blown away by the high power level of my card pool; I could effortlessly build a fantastic three-color deck from any number of combinations. While I briefly toyed with a G/B/W version of the deck, the blue cards, namely Compulsive Research, were far too good and far too easy to cast to leave on the sidelines.
I was very happy with the U/G/B version of the deck that I wound up playing; I didn't make a single sideboard change in the seven rounds that I played even though I dropped the first game of my match five times during the Swiss.

BDM: Once you had your deck settled, you had a lot of karoos to work with for your mana base. Can you describe the process you go through when working out your mana? Is there a trick that players can take with them to their upcoming PTQs?

Sadin: I don't think that there are any rules that are set in stone for building your mana base, however the most important piece of advice that I can give is to try to have one or two base colors for which you have at least seven sources. As for figuring out the mana on splash colors, I find it important to decide if I'm going for a small splash, or something more akin to a wave. If my only red cards are a Galvanic Arc and a Cackling Flames, then I will usually get away with only two red sources, but if I also have an Ogre Gatecrasher and a Thundersong Trumpeter, I'm probably going to go up to four red sources.

BDM: How many times have you qualified for the Pro Tour via a PTQ win? How much different is it to have the airfare end of things covered with the win? How big a deal is it to win the airfare to Kobe? Had you qualified on rating – or the dreaded 16th in a GP – would you have been likely to attend?
Sadin: This is the third time that I have won a PTQ. My previous two wins were to European Pro Tours, the prize purse that I received from winning those qualifiers (after finals splits) covered about half of what I paid for my plane tickets, leaving me to cover the other half myself. The new payout system of tickets, instead of stipends, is about a thousand times better (or if you'd prefer actual mathematical terms, about 2-3 times better).
I would be going to this Pro Tour regardless of the source of my invitation. I've been enjoying Magic too much and playing too well to sideline myself from a PT for any non-emergency reason.
Interestingly enough, the first Pro Tour that I qualified for was held in Kobe. I qualified for this event via rating and I unfortunately decided to sit it out as I didn't feel confident enough in my play to justify the expense of the trip. If I had instead won a plane ticket, there is no way that I would have been able to stay home that weekend.

BDM: Can you describe what kind of influence playing at Jon Finkel's has had on you? Do you think that experience contributed to your win this weekend? Do you think that you could have navigated the same route through the one-loss bracket last season before you started drafting at Jon's?
Sadin: While my in game play has improved considerably since I started playing with Jon, I think the biggest impact it has had is in how I approach games and tournaments mentally. I used to go through a very quick deterioration in my play if I made a mistake or lost a match that I felt I should have won. This mental collapse would almost always lead to an early exit in the tournament that I was playing in.
Now when I play in a tournament, I'm able to keep my head in the game regardless of whatever boneheaded plays I might have made. I feel like I proved this to myself last weekend, as I strongly doubt that I could have kept my composure for the nine matches that followed dropping my first round loss.

BDM: Do you have any advice for players fortunate enough to reach their remaining RGD Top 8 drafts in the coming weeks at both PTQs and Limited Champs? You and I have talked about the idea of drafting synergistically as opposed to relying on a more traditional pick order. Can you elaborate on this concept, perhaps using your Top 8 draft as a point of reference?

BDM: What are your expectations for this weekend in Charleston? You are ineligible to play in the PTQs on Saturday or Sunday, so you guys are going to have to do well.
Sadin: I think we are going to do very well, Mike, Paul and I have tested a bunch and we're bringing three very good decks. I'm feeling quite confident in my play, our decks and my teammates. Mike has been itching for a big finish for a long time now and there's no reason why it shouldn't come this weekend. Paul is an absolute master at teams, he's cashed at I think 85 percent of the team PTs and GPs that he has attended, including the GP and PT that we played in together last season.

BDM: You are heading off to college this fall. Do you feel a real pressure to get yourself to Level 3 status or will you still PTQ once you enter the halls of higher education?
Sadin: I'm definitely going to make an extra push to try to get to Level 3 as quickly as possible as I don't know if I will be able to attend many PTQs while I'm at school. That being said, even if I don't train I couldn't possibly quit playing Magic right now as I'm enjoying the game, and the people who play it far too much.

After you've given that card pool a good look, to see the deck Steve ended up building:

To check out the Top 8 draft decks from the current season (including Steve's), visit the Pro Tour-Kobe Qualifier season decklist page.

Steve managed to overcome a first-round loss and win the PTQ by staying positive, keeping himself well-fed, and believing in the deck he had constructed. How did your PTQ experiences go this past weekend? Share your story by clicking on the ‘discuss' link below.