Shades of Torments Past

ike you, I have been following along each day as another tantalizing morsel from Magic 2011 is parceled out here and on other sites around the blogosphere. As exciting and revolutionary as M10 was for a core set release, the bar was set very high for this year's iteration and M11 has not only cleared it but left a seemingly impossible vault for Magic 2012 next year.

From cards like Baneslayer Angel and Dragonskull Summit returning, to mind-blowing new creations like Primeval Titan and Conundrum Sphinx and onto exciting reprints from sets past—M11 has promised to make its impact felt on Constructed as soon as it is set legal. My preview card for this week is a reprint that has seen more than its fair share of time on the Sunday stage; played by Hall of Famers Jon Finkel, Olivier Ruel, Rob Dougherty, and many other players who built their decks around this powerful critter who at one point set the pre-Tarmogoyf standard for a two-mana creature.

Do you know what card I am talking about? If you need a hint you can just look to the title of the column ... or you can just .

When I got my preview assignment I had to read it twice as my brain just assumed that the card name I just read was Nantuko Husk. Husk is a pretty standard card for a core set, but not one of the all-time greatest creatures at its mana cost and a central piece of mono-black decks that range from aggro to control.

Long before Vampires were the Standard monsters of choice Zombies roamed the competitive landscape and where you have zombies you are sure to find insects. Check out the Zombie deck that Brian Kibler and Jon Finkel deployed at US Nationals in 2003 to make the Top 8 at that event. While you are at it, check out the bottom four players from that year's Top 8—which included both Jon and Brian.

The Shade even made an appearance in the sideboard of eventual National Team member Justin Gary's Mono-Black Control deck that season. The Insect Shade struck the killing blow against none other than Jon Finkel in the quarterfinal elimination match of that event. Justin would go on to make the team and alongside Gabe Walls and "The Champ" Joshua Wagener they would win the World Team Championship that year.

Nantuko Shade had already established itself as a force to be reckoned with during the Block Constructed portion of the previous Pro Tour season when multiple Hall of Fame players leaned heavily on the Torment portion of the block to build their decks.

As you look through these lists you may notice that with the reprinting of Nantuko Shade there is actually a lot of overlap of Mono-Black Control cards from that era and the impending Standard format. I am going to take a stab at converting Rob's list to the upcoming Standard format. You could start out with a base of: 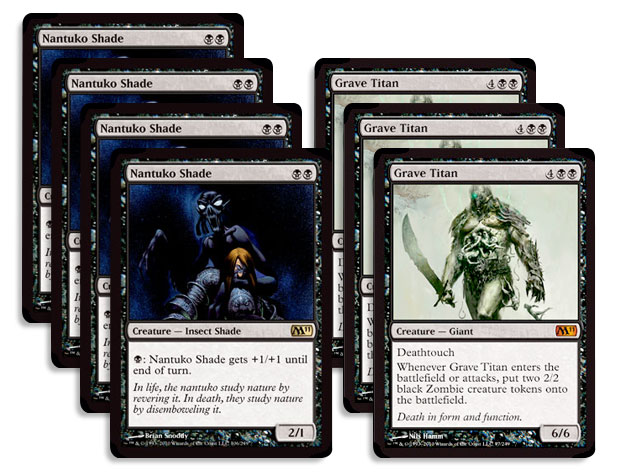 Innocent Blood and Chainer's Edict are not options but there is always Fleshbag Marauder and Gatekeeper of Malakir (although I would prefer to pair the Marauder with Sun Titan if given a chance) to fill that role. 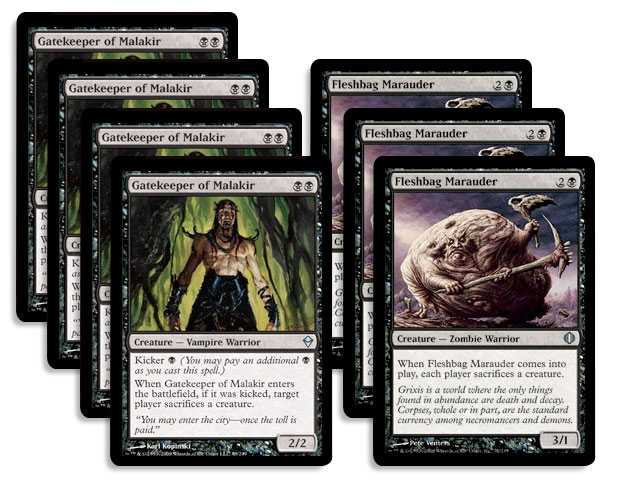 Cabal Coffers is not an option for us, and Crypt of Agadeem, while evocative of Cabal Coffers, does not fit here. We will likely have to be content with some colorless mana acceleration: 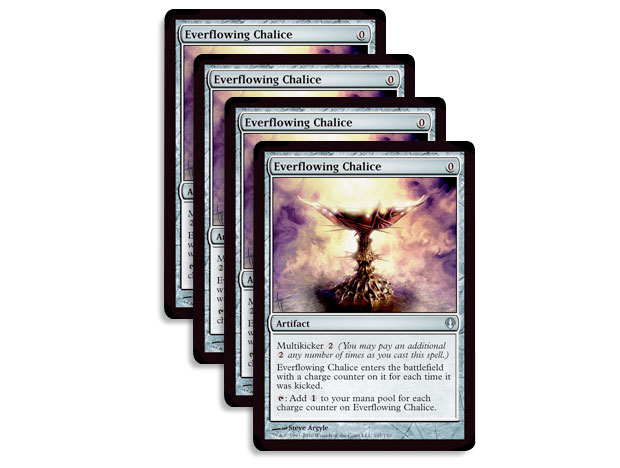 Mutilate is not on the table for us but there are actually a couple of Day of Judgment-like effects to choose from with All Is Dust and Consume the Meek. I guess it all depends on whether or not we want to play with Eldrazi Temples. Of course we could always mix it up: 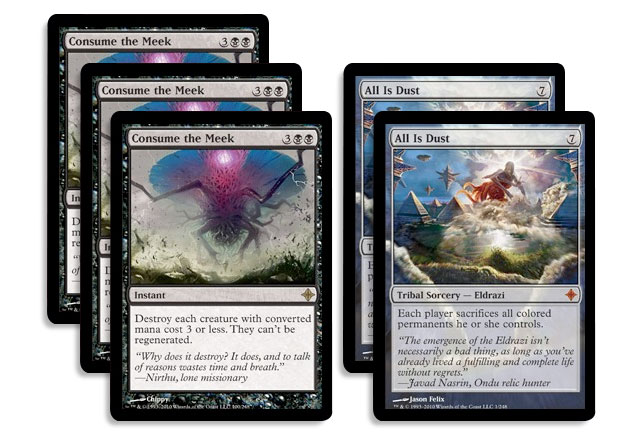 3 Consume the Meek
2 All Is Dust

The M10 reprint Haunting Echoes only has a few more months in Standard before it is ousted upon the release of Scars of Mirrodin and I am not going to let it sit on the bench here. 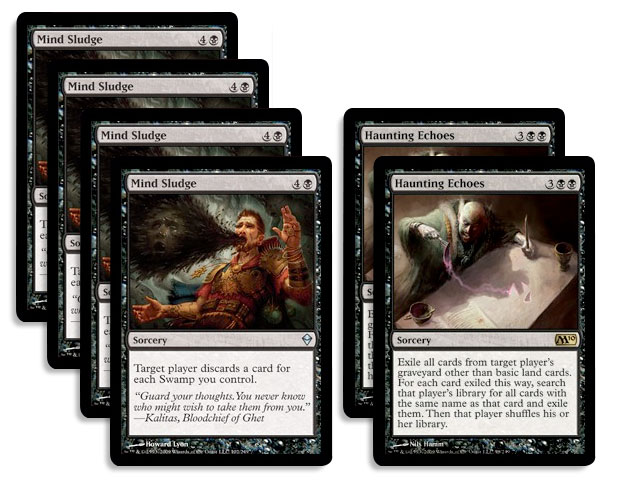 We don't have any land destruction that we want to play in black but we can address some of the problems with Colonnades and their kin, in our mana base. We also have Diabolic Tutor looking for a chance to see some pro-rotated action. We can leave that card in here as well, although I am going to cut it down to two to make room for some other cards that have synergy. 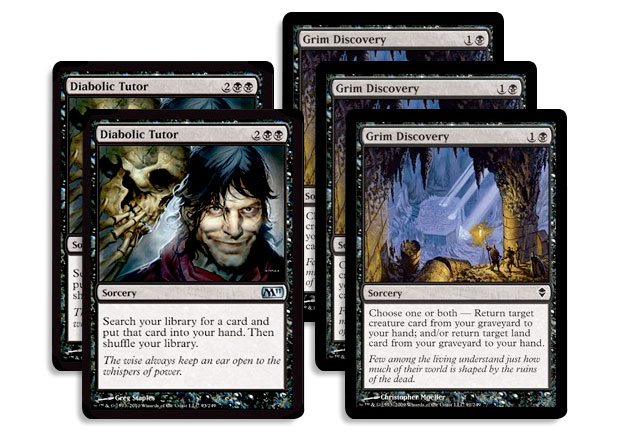 The Grim Discovery lets us get back our creatures that are also removal while getting back fetch lands and Tectonic Edges. 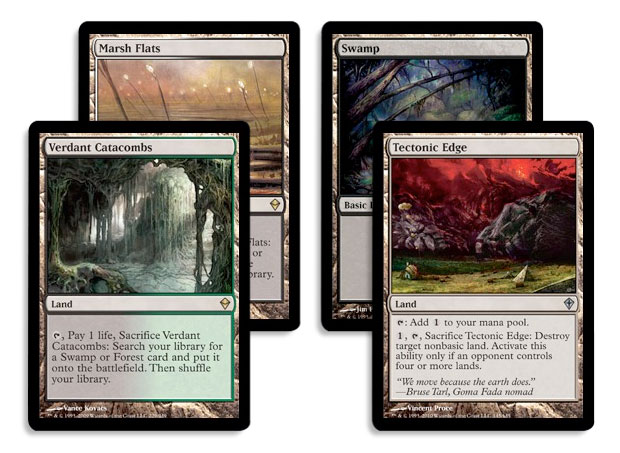 I am certainly looking forward to dusting off my playset of Torment Shades and shuffling up some variant of this deck. Much like the Shade infiltrated the Zombie camp the last time around I would not be surprised to see insects buzzing around the battlefield alongside Vampires come the new Standard. For those of you who don't already have their Shades or need to reacquire them, what better place to start then at an M11 Prerelease next weekend!

Friday Night Foil: All Your Mana Base Are Belong to Us

Speaking of Zombies, if you like punishing players for their seemingly mono-non-basic land deck rlists these days you may want to head out to your local FNM location in July to bling out your Anathemancers. I have been seeing more and more of this guy in the two-man queues on Magic Online and he can put a big hurting on your life total pretty quick these days. To find an FNM location near you just click here or use the locator to the right. 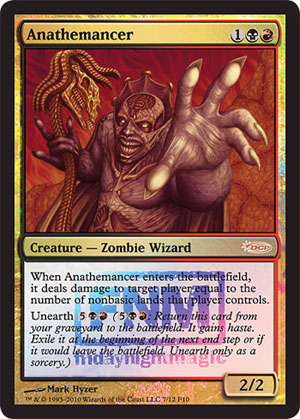 Rookies in the Running

Last week we looked at the top of the Player of the Year standings and caught up with some of the contenders for the crown. This week brings us the Rookie of the Year standings, which with much lower point totals at the top will be much more impacted by National Championships where players can burst onto the scene a la Lino Burgold and Aaron Nicastri and leapfrog packs of players in one mid-season event.

On top of the list is Andrea Giarola from Italy who picked up all sixteen of his points from his Top 4 finish at Pro Tour–San Juan where he made his pro debut. Hot on his heels was American Matt Nass who picked up a big chunk of points by winning Grand Prix–Oakland. Nass is someone who is definitely keeping an eye on the race for the Rookie crown and could be willing to go to great lengths in pursuit of it. 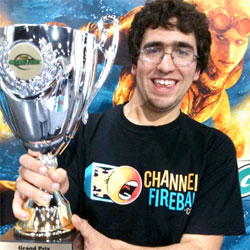 "Winning Rookie of the Year would mean a lot," said Nass. "Besides the free airfare / hotel (that) is associated with it, it is a huge honor. It would really confirm my belief that I can play this game at a high level, and would make me feel more confident about spending a significant amount of time and money on Magic. It would push me to try and reach for even higher goals next year."

He explained that his plan was to travel for more events this year than he had originally expected before his Oakland win. All the North American Grand Prix, US Nationals, the remaining Pro Tours and the Grand Prix that precede them are all on his travel itinerary for the remainder of 2010.

"As far as foreign Grand Prix, I might go to some if I am close to some player level or need it to make a push for Rookie of the Year," Nass added. "I might consider Sydney since Australia sounds cool, and Grand Prix on islands tend to be a little smaller. The next event with Pro Points involved that I will be playing is Grand Prix–Columbus, most likely."

Right behind Nass was Pro Tour–San Diego Top 8 competitor Niel Vianne from Belgium. Vianne was a player really hoping for a strong showing at his country's Nationals last weekend since he needed the points to lock up invites to both Amsterdam and Worlds. As it is, he will need to find one Pro Point between now and Amsterdam to stay in the running after not doing well at Nationals. He will need to finish deep enough into Day Two of Grand Prix–Göteborg to pick up the one Pro Point needed to secure an invite to Amsterdam. 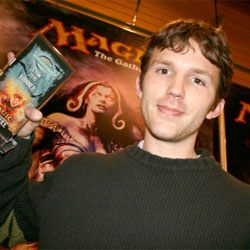 Germany's Florian Koch is waiting on his first taste of Pro Tour competition in Amsterdam despite being intimately involved with the game for more than a decade. With eleven points in the bag and another two guaranteed from registering in Amsterdam his eyes were set not on the Rookie of the Year race but on picking up the crucial two points he needs to fulfill a dream he has had for as long as he has been playing Magic.

"I would be very proud to win this title, but my main goal is to attend Worlds," said Koch of his drive to hit fifteen Pro Points between now and the World Championships in Japan. "That's a dream, and if I make it to Chiba then Level 4 is in reach, which again means a lot because then I can go to all the Pro Tours next year. I have been trying to qualify for twelve years and this is just my first Pro Tour, so going to four more still seems huge. Rookie of the Year would definitely mean a lot, too, but there are so many possibilities and every small step takes you one level higher, but on the other hand if you stumble in Amsterdam you have nothing achieved yet. Then the story quickly turns to 'got lucky once in Lyon ... '"