A Shift to the North

here was time early in Pro Tour history when Canada was a Magic powerhouse. Players such as Matt Vienneau and Gary Wise were succeeding—and writing compellingly about their success—and Pro Tour Dallas winner Paul McCabe looked like he was going to be one of the all-time greats. Canada dominated the end-of-season storylines in 1997, when McCabe was the second winner of the Player of the Year title and the team of Gary Krakower, Mike Donais, Ed Ito, and Gab Tsang were crowned World Team Champions. A new country had slammed its flag onto the Magic world map and it looked like nothing could dislodge it...

Except that it kind of just fell over. McCabe and Tsang drifted away from the game and, while Wise, Vienneau, the Donais brothers, and Krakower were successful, the players from Canada never seemed to live up to the promise that they held at the end of the 1997. There have certainly been some standout players in the years since then—Aeo Paquette, Rich Hoaen, Jeff Cunningham; Elijah Pollock, David Rood, and Steve Wolfman of Team 2020 fame; and Gab Tsang's triumphant return at Pro Tour Atlanta alongside Gab Nassif and David Rood as Team Nova all leap to mind—but throughout this millennium Canada has largely been an afterthought when discussing the world of Magic.

Tournament organizer Rob Johnson recently started promoting a series of events—run by various Canadian tournament organizers— in the northernmost part of this continent to help draw attention to the Canadian Magic scene and help foster a new generation of Canadian players who would be ready to take their game to greater heights at the Pro Tour. The Canadian Magic Tour recently held the third of its open events in Montreal and more events are looming on the horizon.

"The premise of the events is simple: With it being so hard for American companies to come over the border to run events it was time for someone to organize the organizers to work together," explained Johnson. "At one time Canada was a powerhouse on the Pro Tour, and without these events it's tough to develop the next Gary Wise or Terry Tsang."

One of the players Johnson is hoping will ascend to greater heights is Pascal Maynard, a member of Canada's team at the 2010 World Championships and the winner of the third stop on the Canadian Magic Tour.

Based on his Top 50 finish at Worlds with Steel Artifact, Maynard propelled his team to the precipice of the elimination rounds for the Team Championship before finishing in 5th place. He followed that up with another Top 50 finish in Nagoya and, of course, his win two weekends ago in Montreal.

The 18-year old card shop employee from Quebec has been playing Magic since he was 10 years old. After stumbling into a gaming store he toyed around with a handful of different card games before deciding to play Magic. He saw that the players in the Magic events were slightly older than the other game players, which promised that it was not only a game he could stick with but a player base that could accelerate his learning curve.

Once he was exposed to the higher levels of competition, when someone told him about the Pro Tour, the hooks were in him for good. He has dreamt about playing on the Pro Tour since watching the webcast of Antoine Ruel's Hall of Fame-clinching win at Pro Tour Los Angeles in 2005. 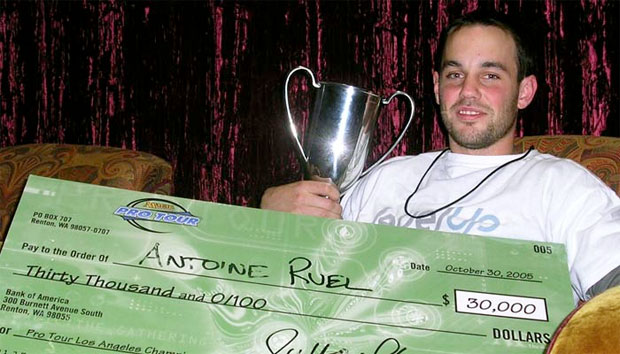 Ruel’s win in 2005 triggered Maynard’s desire to play on the Pro Tour.

"I made the leap at that exact moment," recalled Maynard. "I was watching my first coverage, PT L.A. and saw Antoine Ruel winning it, the crowd, the money and the claps. That was where I wanted to be at. I've been trying to jump into the Pro Tour scene almost since I played my first FNM. Making the national team last year was the huge step that threw me into it."

After some early success in JSS qualifiers, Maynard toiled in the PTQ trenches and could not quite break through to Day Two at a Grand Prix. That all changed with last year's National Championship, for which he qualified on rating. That's when made it into the Top 8 after more than 50 practice drafts and a last-minute audible to a Destructive Force deck.

Once he got to Worlds—his first taste of Pro Tour competition—he closed out strong with a 6-0 finish in Extended playing the Steel Artifact deck that was one of the breakout decks from that event. Maynard was quick to give the credit for the deck to another up-and-coming Canadian player.

"Jon Smithers is the man behind this deck," said Maynard. "He joined our Worlds playtest team after winning Grand Prix Toronto. We sent him like 4-5 decklists including an 'Affinity' style one we had already gave up on because of its instability. A week before Worlds we all met up in Montreal for some intense testing. Jon surprised us with Ranger of Eos. It was exactly what the (deck) needed—a mid/late game capable of pushing 5-8 power on the table."

Maynard recently displayed his own deck-building ingenuity when the bannings of Jace, the Mind Sculptor and Stoneforge Mystic invalidated his playtesting for the third leg of the Canadian Magic Tour. The decision not only took the deck he was planning to play off the table but threw the entire metagame into upheaval, with decks such as Valakut and Red Deck Wins re-entering the picture. Maynard had settled in for a week of testing with other players in Quebec City and was vacillating between Goblin Guides and Tempered Steel when a forgotten card from Rise of the Eldrazi inspired him. 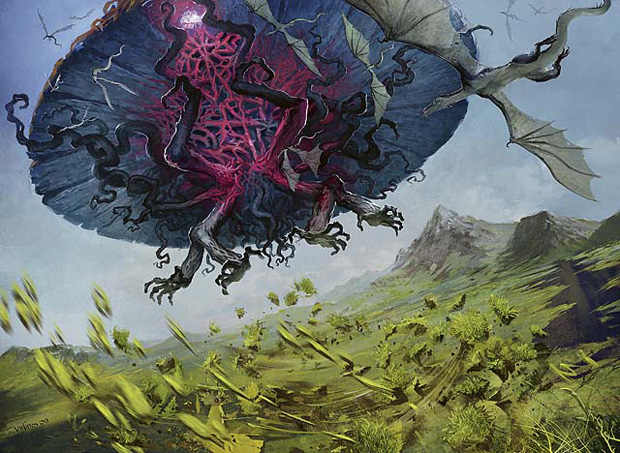 "I was building a sideboard for Quest Tempered Steel through Gatherer and saw Emeria Angel, which immediately reminded me of Gravitational Shift," explained Maynard who had once played a single copy of the enchantment in a previous version of CawBlade. "Using Squadron Hawk, Emeria Angel, Sword of Feast and Famine and Gravitational Shift I connected a blue-white control core of spells that I already had to it and it worked perfectly."


Gravitational Shift functions like a blue Overrun in this deck while acting as a Moat against many of your opponents. Goblin Guides, Grave Titan tokens, and—perhaps most importantly—Deceiver Exarchs are effectively negated by the card while the offensive boost it provides does not leave much time for an opponent to find an answer. The deck proved to be very versatile and took down everything the field threw at it—with one exception.

"I went 9-1 and won against two Red Deck Wins, two Valakuts, two Twin, one blue-black, one Mono-Blue Architect, one Kuldotha Red," listed Maynard before 'fessing up to his one stumble in the event. "Oh ... and I lost to Mono-Blue Mill round 1 ... Grindclocks, Keening Stone, Archive Trap, Hedron Crabs ... I'm not even kidding." 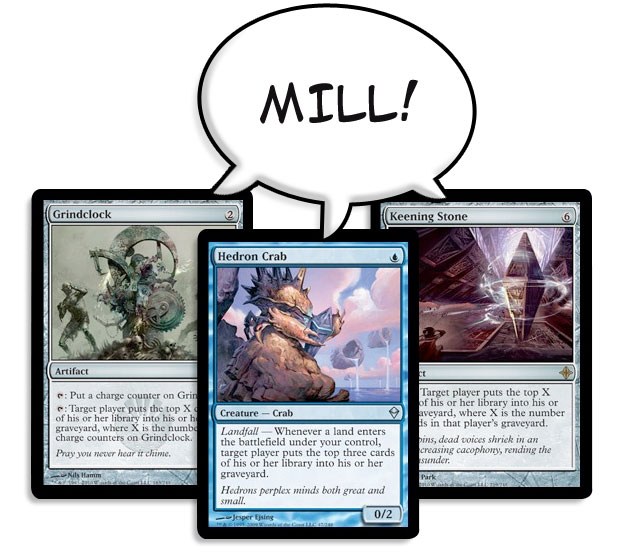 As a side effect of working in a card shop, Maynard did not have the chance to play in the Magic 2012 Prerelease at Boutique Donjon. He was handing out packs of the new cards instead of opening them. Of course, that vantage can provide some insight into the cards that you can't always find when focused on building a deck. Grim Lavamancer was something Maynard had previously identified as an impactful Standard card he wanted to build with but a couple of the new cards in the set piqued his deckbuilder interest as well.

"Vengeful Pharaoh and Arachnus Spinner are both cards that caught my attention," he said. "They produce card advantage in a way we've rarely seen in the game that is pretty interesting. I'll try them in different builds in the near future for sure."

As for the future of Pascal Maynard, his goal is to lock up a minimum of Level 4 in the Pro Players Club of the season and be qualified for all the Pro Tours in 2012. Making the national team for the second year in a row would go a long way to making that happen. He also felt that the rising tide of the Canadian Magic scene was going to be a key to building upon his success. 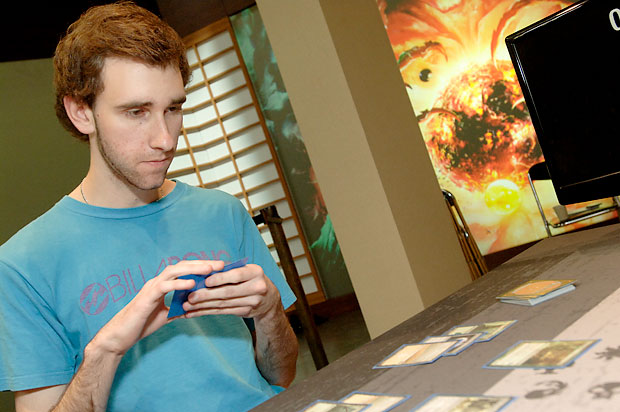 "Canadian Magic has been growing during the last couple years, I've been travelling with different Canadians from different provinces during GPs/PTs and I've seen talented players and expect them to emerge in the next few years," said the young Quebecer before giving me a quick scouting report for Pro Tour Philadelphia in September. "Keep an eye on Justin Richardson. He's a shark here in Quebec province."

Standard has undergone a lot of changes in the past couple of weeks, and with Magic 2012 legal this weekend for Japanese Nationals and the Star City Games Open in Cincinnati we can expect to see lots of exciting new decks. But just because there are new cards, don't forget to look through some of the cards that have one foot out the door. Who knows, you might find another Gravitational Shift lurking in the back of the format.