to Sliver Week! As everyone knows, I have been a huge fan of slivers since I got passed my first Watcher Sliver in a triple Time Spiral—hold that thought, that's my editor calling. 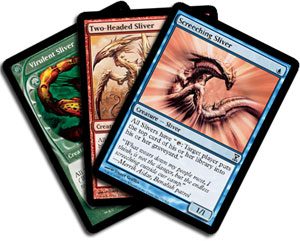 So apparently it is not even remotely Sliver Week, although if you have had your ear to the ground of the metagame ,it may have sounded that way. Hot on the heels of Lachmann and Van Lunen tearing up the field in San Diego with their Virulent Sliver draft strategy, the same thing is happening in Time Spiral Block Constructed. While all the players in San Diego weren't drafting many cards that would hit the board before turn three, Jacob and Chris would each have multiple slivers in play that required multiple creatures to block them by the time their opponents played their third lands. In some cases they would have their opponents sullied with poison counters before either enemy head could muster a non-land permanent.

Last week as the players in my area were scrambling to complete their various Block lists, we began to hear murmurs of a sliver list that was VERY different from the WafoPair deck that made such a splash in Montreal. The deck featured a decidedly Lachmann and Van Lunen roster of slivers that included Virulent, Screeching, Two-Headed, Firewake, and similarly implausible Constructed cards. Despite my skepticism, the deck was tearing up Magic Online and in the hands of John Alesi-Mullen won back to back Premier Events.

I was discussing the deck with Greg Weiss, of Elemental Bidding fame, and he could scarcely believe the deck's contents—and Greg Weiss has a much broader definition of "Constructed playable" than just about everyone else in the world.

"It has been doing pretty well online, Greg," I retorted.

"Oh, I know! I must have lost to it six or seven times today."

Both Richard Feldman and Zac Hill approximated decklists in their Star City columns this week and Frank alluded to the deck in this week's manifesto (it doesn't seem right for a fanatic to "write" something as ordinary as a "column." Fanatics compose manifestos.) but the actual list as played by Alesi-Mullen, who recently finished 27th in Yokohama with his Teachings control deck, has been elusive.

"I actually didn't create it," John was quick to point out when I talked to him about the deck. "It was created by wrapter online. He gave me his list, which was very rough and needed work. I tested it and made changes. The deck's name is Osyp Drives the Sliver Kids to School."

4 Grove of the Burnwillows
75 Cards

"It's doing well in the 8-man queues," continued John, who belongs to the online clan Osyp Drives Me to School. "I won two PEs with it, and my clanmate trunks123 has made the Top 8 of two PEs with it. Also, wrapter made Top 8 of a PE a couple weeks before I played it with the original list."

The results were not in from the European PTQs yet but apparently Iñigo Romero made the Top 8 of a Madrid PTQ and lost in the finals with the deck. Ingo had popped up on Magic Online the day before the PTQ and urged me to play the deck but I ended up not playing in the tournament.

"I had no idea it made the finals of a PTQ in Madrid," laughed John when told that the deck had gone transatlantic. "I did give the list to a lot of players who said they were planning on taking it to PTQs. The deck is great for the PTQs because it has a great matchup against the popular GW deck and White Weenie. The blue-black-splash white teachings matchup is also favorable. Finally, the deck is just a blast to play, who doesn't want to go up to your friends at the end of a PTQ round and tell them you just poisoned someone?"

John feels that the best matchups for the deck are creature-based decks with no real way to remove a Telekinetic Sliver from the board, and it preyed on the herd of green-white Tarmogoyf decks that stampeded through the PEs in the wake of that archetype winning Grand Prix–Montreal.

The deck certainly had surprise value when it was first unleashed, but it isn't just a one-hit wonder in John's opinion.

"I think the deck can absolutely continue to be viable, and is a solid choice for the upcoming PTQs," he explained. "Many people misunderstand the deck. You don't have to go aggro all the time, in fact you usually don't unless you have multiple Virulent Slivers in your draw. You usually sit back on Dormant and draw cards while your slivers tap for mana with haste to play more slivers via Gemhide and Firewake. Then you play 1 or 2 Virulent Slivers, get rid of your Dormants through Frenetic or Firewake, and alpha strike.

"I think if it becomes more popular on the PTQ circuit, people will have to adapt somewhat. The best way to metagame against it is Molten Disaster or Rough/Tumble," said John, although he still seemed to like his deck against most of the sideboard plans we discussed. "Plague Sliver isn't good enough by itself. Frenetic Sliver is very good against Rough and the like. Dormant Sliver lets you get ahead on card advantage, and Molten Disaster can be played around."

I asked John to provide a quick rundown of the deck's match-ups for anyone considering this option for an upcoming PTQ.

Pickles: "The monoblue Pickles matchup is pretty good. Their best weapon against you is the Pickles lock—obviously—but the sliver deck has no maindeck way to get rid of it. If you can poison them before that or lock them out with Telekinetic, you are fine."

Teachings Control: "Teachings/Korlash control can be tricky, but you can beat Damnation with Dormant/Frenetic Sliver. Also, you have Delays to mess up their disruption. Post sideboard you attack their mana base with Ancient Grudge and Boom."

Green-white: "Green-white is a your best matchup, because they can not deal with Telekinetic Sliver in Game 1 and only have Sunlances Games 2 and 3. You can set up Frenetic Sliver first to make the Sunlances worse. You draw more cards then them and with the Homing Slivers you can find more Telekinetics post board than they can Sunlance."

Green-blue: "Green-blue is similar to green-white, although a bit harder as they have Psionic blast to deal with Telekinetic and Delay to mess with your strategy. It is still a positive matchup however, as you can just overrun them with Dormant and poison them."

WafoPair: "Wild Pair Slivers is a very good matchup. You have Harmonic Sliver to get rid of their Wild Pair. You simply have more slivers in your deck than them—thirty-three—and can mill them out faster because of your creature advantage."

Mirror: "Unfortunately, the mirror is quite random. Whoever draws the most slivers Game 1 will win on milling. Game 2 comes down to decking or Dead(ing) their Dormants so you can alpha strike."

I am looking forward to seeing PTQ results in the next few weeks to see how many bodies the poisoners of the field can rack up.

Kenji Tsumura won this week's Invitational ballot, narrowly eking past Willy Edel in the category of Limited Expert—quite the accomplishment for someone who felt his Limited game was not up to snuff when he won Player of the Year two years ago.

This week's ballot is a change from our regularly scheduled programming, which was supposed to be the Storyteller ballot. A funny thing happened on the way to the polling place and the Storyteller ballot became much, much cooler than was originally planned. It has been moved back on the schedule until after the regional ballots and it should be worth the wait.

This week's ballot is for the APAC region and features a handful of players who have appeared on the previous ballots but remain on the sidelines. You can choose which one of these formidable players will join the festivities in Essen by voting in the forums for your favorite player.

The whole block has been printed and there have been abundant tournament results from both Constructed and Limited events. Which card from the Time Spiral block is your MVC—most valuable card—in each category? I am not talking financial value; I mean which card has been the most essential for you when playing Limited and which card has been similarly valuable in Constructed. What are the cards you could just not do without when playing this block? Go to the forums and discuss your nominees for Limited and Constructed MVCs.