orry Simic fans. I don't have anything for you today, but I have to imagine that you are more than happy with what you have seen so far from the Combine. I added a double-digit number of cards from Gatecrash into my Momir Vig Commander deck and have loved every one of them. The cuts are going to be even harder this time out, as I have at least five cards I have already designated at must-adds to the deck. 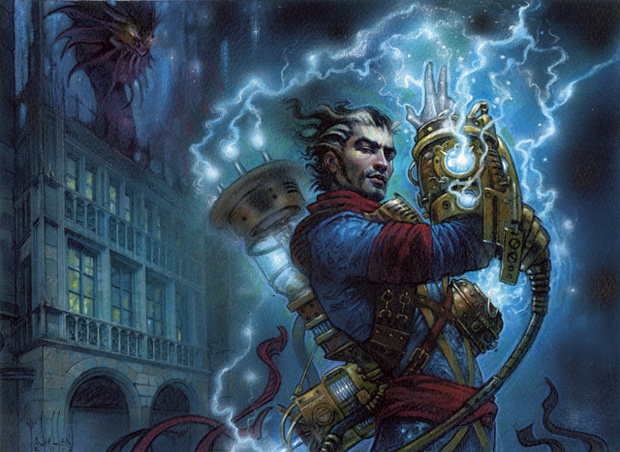 But the final act of this Ravnica block is not a set that is about playing one guild. Much like the champions themselves, if we are going to navigate this Dragon's Maze we are going to need to collaborate with other guilds. Success will only come with the cooperation of others. I don't know what my secret ally will be when the Prerelease rolls around next weekend, but I have my fingers crossed for some red-hot and blue Izzet action. After an initial lukewarm reaction to the red and blue cards in Return to Ravnica, Izzet became my most (often stubbornly) drafted archetype.

Needless to say, I have been looking forward to combining the two guilds, and today's preview card is exactly the type of spell I want. It draws me cards, it kills things, and it even puts stuff in my graveyard until I find a way to repurpose it later in the game. I present to you... Blast of Genius. 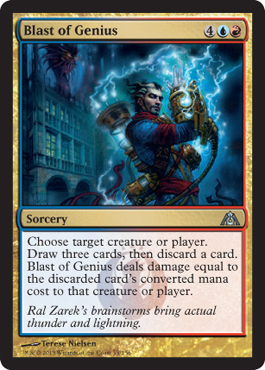 I am pretty stoked to play with this in formats ranging from forty cards all the way up to a hundred. (I am going to have to build either an Izzet or RUG Commander deck very soon.) There is almost nothing I enjoy more than tapping all my mana to draw cards, but it usually means I'm digging for answers and not dealing with the threats at hand on the board. Blast of Genius lets you both restock your hand and deal with a pressing threat such as a creature or Planeswalker.

I am imagining this card filling the role of a Cruel Ultimatum, where you get to counter and kill some cards along the way and then restock while dealing with the top of the opponent's curve. Upon my first quick reading of the card I assumed that the discarded card needed to be one of the three cards you drew with it, but it most certainly does not. That means you can actually set up what you are pitching or even choose based on what you need to dispatch with it.

Let's get the obligatory blue card statements about pitching it to Force of Will or shuffling it away with Brainstorm out of the way right here. What I like about this card is that it does give you something to do with duplicates if your hand gets jammed up with more than one copy of the six-mana sorcery. You can just discard the second one to the one you cast and deal 6 damage in the process.

Dimir-Izzet decks (otherwise known as Grixis) will often want to have cards in their graveyard—think about all the Thought Scours you have seen cast—and flashed back with Snapcaster Mage—and how few of them have ever targeted an opponent. The graveyard has become a pretty essential resource. I can easily envision a scenario in which you pitch either Griselbrand or Unburial Rites to this card and bring the 7/7 back from dead a turn later.

Obzedat's Aid is a card I have had my eye on since it was previewed and offered a new wrinkle on bringing things back from the graveyard. The first thing I thought about when I saw it was "reanimating" Nicol Bolas. Now I have a good way to pitch the pricey but devastating Planeswalker while dealing a hefty chunk of damage along the way.

The new spate of split cards bode well for the damage output of Blast of Genius. Just look at Turn & Burn as an example. While you might only be planning to pay two or three mana for one half of the card, if you discard it to Blast you get to deal 5 damage for the total converted casting cost of the card. When you start pitching cards like Beck & Call you are far exceeding the amount of damage you can reasonably expect to do at six mana. Did I mention you get to DRAW THREE CARDS WHILE DOING THAT?!? 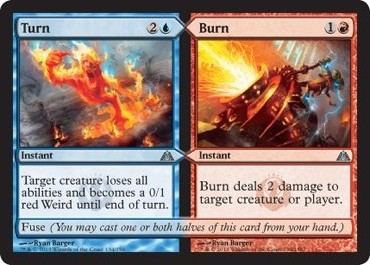 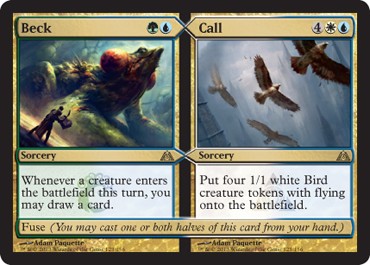 Of course... you could always just build a dedicated Izzet deck with this card, getting a mana boost on several different fronts. Obviously, you have the Keyrunes and the Cluestones and I already mentioned my most-commonly drafted common from Return to Ravnica, Goblin Electromancer. But how about Ral Zarek? The new Planeswalker will let you "ramp" your mana by one (we're not playing Verdant Haven, right... right?) and can help you play this card a little more easily.

Melek, Izzet Paragon is an intriguing piece of the Izzet puzzle that is going to let you take some pretty disgusting turns should your opponent make the mistake of allowing it to live through to your untap step. Add in the aforementioned Turn & Burn, some Mizzium Mortars, and a couple of counterspells, and we are on our way to a deck.

Yes... yes... I know you are still pushing back about the idea of a six-mana sorcery. I am always quick to Quicken and love a Teferi as much as the next guy writing a Magic article while wearing a blue mana-symbol shirt, but neither of those tools are available to Standard and Block. Is it time to break the sound barrier with Hypersonic Dragon and play Blast of Genius at the end of your opponent's turn?

I sure hope so!