Wizards of the Coast is out of the office for the Thanksgiving holiday, and will return with new articles beginning Monday, 11/29. In case you missed it, what follows is the article that ran in this slot last week. In the meantime, we'll still be running new content in Card of the Day, Magic Arcana, and Ask Wizards.

week, I actually get to play with everyone else and preview an Unhinged card. I am doubly excited about this since I have not had the chance to take part in previews since leaving shark infested waters for this column. Plus I got a pretty cool card to highlight. To be fair it seems like you can't miss when previewing an Unhinged card. The last couple have been ridiculous with pretty mind bending effects. Speaking of mind mending… What happens when you are playing Enter the Dungeon in your deck and the guy next to you is desperately trying to avoid denimwalk? Do you just not cast it and treat Enter the Dungeon as a mulligan when you draw it?

I wasn't the only one excited about my card either. It set off a flurry of activity on our little magicthegathering.columnist list when Scott announced the card I would be previewing.

Just don't put Mana Vault in your deck - you will frown when you want to draw seven and you have 3 extra mana instead :)

Isn't an alternately savage strategy to play all (mostly) Tedin cards and just use the card to impulse through your deck? Like you can play all Tedin, random non-Tedin bullets in clusters of 2 or more, and all lands by one artist. 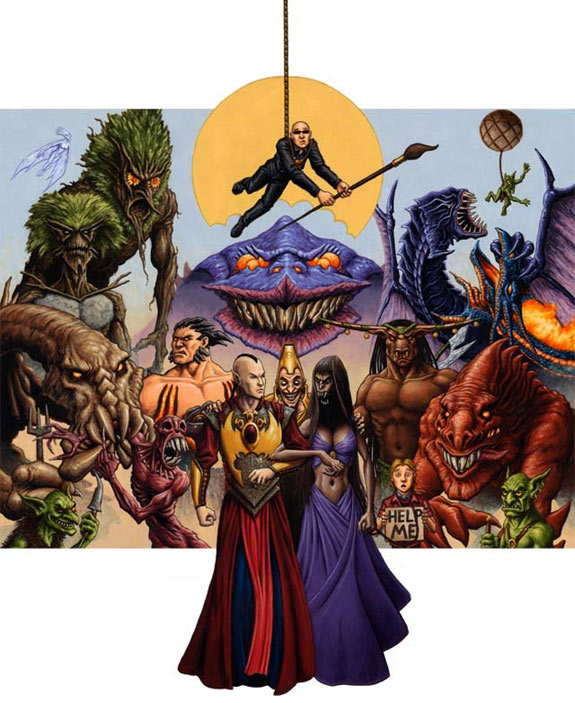 The card is functionally a reprint of Demonic Consultation with a nod toward card art that is not usually a factor in game play. Nate's comment was in response to my comment about simply putting the card into a Necro deck. That's fine if Necropotence is your only card by Mark Tedin but Mr. Tedin has often had multiple card illustrations per Necro deck starting with Nevinyrral's Disk and up through Mana Vault in the Illusions/Donate versions.

Mark Tedin has illustrated quite a few cards in his Magic career so if you want your Aesthetic Consultation to actually hit your Necropotence -- and why would you want it to hit anything else, really -- then that means quite a few cards will likely be excluded from your decklist. No Chaos Confetti, Time Twister, Psychic Allergy, Mana Drain, or Winter Orb.

Actually, you probably want to duck David Martin cards also just because you can never reliably tutor for them without risking hitting another Aesthetic Consultation. Starstorm is out, as is Horn of Ramos and Fire/Ice. Scott Johns suggested playing a sixty card singleton deck with all sixty cards coming from different artists but the problem with that is that you lose if you name an artist and hit it in those first six cards as you will mill away your entire library and, barring some unlikely events, lose on your next draw. Then again, this is Unhinged we're talking about, so that approach is certainly in the spirit of the set.

Instead however, I think you want to aim for roughly ten different artists with your non-land slots so you can tutor for anything you want. Basically, play it like a Consultation but with the challenge of working around the card illustrators.

One of my favorite Demonic Consultation decks makes an aesthetically pleasing transition from outdated Extended format to Unhinged friendly casual. Other than a couple of lands there is not any artistic duplication among the eighteen artists that contributed pieces to this gallery. Can you figure out the list based on the artist's names?

I was genuinely surprises by how much artistic diversity there was in these two decklists, with over sixteen different artists contributing work to each of these decks. I thought that in the older decks every other card would be by Mark Tedin or Anson Maddocks but that was not the case. In fact, the only artists that appeared on multiple cards in one deck were Jesper Myfors and Christopher Rush.

I can give you a couple of hints about the decks to help you puzzle them out.

4 Force of Will 2 Misdirection
37 Cards

Or how about this famous decklist…?

Of course if you were especially greedy -- as I am often accused of being by Mike Flores -- you could play with eight Consultations and have twice the brokenness! I might even try resurrecting this deck for some fun casual games.

Now I realize that Polluted Delta is a million times better than Bad River but I was trying to avoid any duplicates among the artists and my original list featured Therese Nielsen in the land slot over Alexander. In talking to Mike Flores about the decklist he guided me away from that plan, “I can't imagine you would want to play a land that comes into play tapped in a Consultation deck just because it has the same artist as another card in the deck!” Hence the Rob Alexander duplication.

However you decide to play this card, you will have to know your artist names. If you play in an Unhinged tournament this weekend you should make a point of knowing the names of your key cards' artists just in case you decide to consult your deck for aesthetic purposes.