week we took a look at the most current Player of the Year standings and – surprise, surprise – Kenji Tsumura had nosed out into the lead. This week the race enters stage two with Pro Tour–Yokohama. It was in Yokohama that Kenji first won the Player of the Year title during the very final round of the Swiss at the 2005 World Championships. That was the most recent event in the shadow of the giant ferris wheel, but Yokohama has being playing host to high level Magic for a long time now. 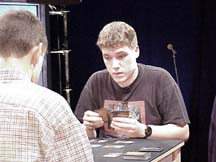 Kai Budde, on the path to the title.The first World Championships to take place in Japan – and the first one to leave the home turf of Seattle after several years – marked the ascendancy of Kai Budde. Kai had been shredding the Grand Prix scene in the months leading up to the World Championships but was far from the one-named entity he has become in the intervening years. The soon to be feared German Juggernaut had racked up three wins and a second-place finish. When you added that up with winning the World Champion title, it also equaled a Player of the Year title.

For most players who were not slogging it on the frontlines of the Pro Tour it was the first time they heard of the man who is sure to be a first-ballot Hall of Famer later this year. Grand Prix tournaments did not receive the same level of coverage back then that they do today, so Kai seemingly burst onto the scene in Yokohama. But with wins in Vienna, Barcelona, and Amsterdam – not to mention a second-place finish in Birmingham -- he had racked up more than enough points to claim not only the PoY title but rightfully control of the Sunday stage.

From Yokohama Kai would go on to make eight more Sunday finishes at the Pro Tour level. Of those nine appearances he would only lose twice. It was almost a clean sweep for the Germans at that event with Kai locking up the individual Worlds title as well as PoY. His future Phoenix Foundation teammate Marco Blume was on a German National team with Rosario Maij, David Brucker (two names who are currently shortlisted at any Pro Tour for potential feature matches for their recent accomplishments), and Patrick Mello made it as far as the Finals but lost to the Kyle Rose-led American team that included David Hunka, Charles Kornblith, and potential Hall of Famer Zvi Mowshowitz. 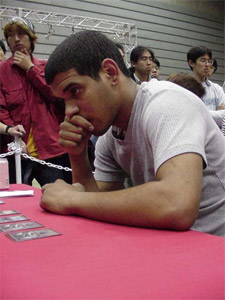 David Williams, picking up one of his eight GP Top 8sBack in 2001 it was almost unheard of for any Japanese players to travel outside of the Pacific Rim for a Grand Prix. The thought of an elite cadre of Japanese players storming into a North American event and taking home the prize was unfathomable. Back then the tables were turned with players like Alex Shvartsman trotting the globe in pursuit of fortune, glory, and Pro Points.

Team AlphaBetaUnlimited.com made a fearsome threesome on any continent with Ryan Fuller, Chris Benafel, and future World Series of Poker finalist Dave Williams holding the trophy when the dust from that Grand Prix settled. Poor Shark was the other team in the final match which was interesting for a number of reasons. The team was led by Masahiro Kuroda who to that point had a handful of modest accomplishments. He would go on to win a Masters with PS2 and become the first Japanese player to win a Pro Tour in Kobe several years later defeating Gabriel Nassif in the finals.

Kuroda's teammate was Tomomi Otsuka, one of only three women to have a premier-level Top 8 finish. Michelle Bush also got as far as the finals at Grand Prix New Orleans before losing to Bill Stead, Kate Stavola reached the Quarterfinals of 2004 Grand Prix Columbus, and Marie Laure Saulnier was one-third of the Top 4 finishing Legion of Rabbits at GP Cannes. 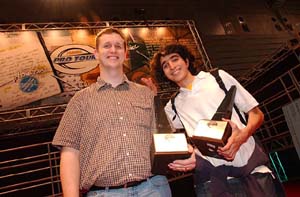 My flight to Japan was delayed and I made it to the tournament site just in time to watch Tomi Walamies playing his outrageous Pattern of Rebirth combo deck against Diego Ostravich. Walamies would go on to make the Top 4 of that event – and what a Top 4 it was. Hall of Famers Darwin Kastle and Bob Maher duked it out on one side of the bracket while Tomi was grappling with a still little-known Gabriel Nassif in the other.

Nassif was not outright qualified for the events and had to grind in with a 5-0 performance before the actual tournament even started. He was playing an Enchantress deck that ended up bouncing all of an opponent's permanents with Words of Wind. It was not enough to take down Bob Maher playing a Tinker deck to the title.

The Pro Tour that followed the event was not too shabby either. The last Pro Tour in Japan had been marked by Kai Budde's first Top 8 and several years later this Pro Tour would mark Jon Finkel's last Top 8 appearance. It was also the first Top 8 for another of the game's great players – Masashi Oiso. Oiso would eventually rack up five Top 8s over the next three seasons.

The winner of that event was Mattias Jorstedt, capping off a magnificent season that saw him play on Sunday three times. His accomplishments were overshadowed by the continued dominance of Kai Budde, who won two Pro Tours that season along with another Player of the Year title.

It's quite funny to look back on the coverage of older Japanese Grand Prix events. If you look at them now the Top 8s seem completely star-studded but at the time the players were barely known to players outside of the Asian Grand Prix circuit. Just look at the Top 8 from Yokohama in 2003 featuring 15-time Top 8 finisher Masahiko Morita, three-time Pro Tour Top 8 competitor Shuhei Nakamura, and Pro Tour winners Masashiro Kuroda and Shu Komuro.

Masahiko Morita was getting his fair share of coverage by the time the Grand Prix had taken a one-year trip around the globe. Morita drafted the Dampen Thought deck all weekend long and continued to do so in the Top 8 of this Grand Prix. It was not enough to get him past Kazuki Katou. Katou has to be pretty upset about the demise of Rochester Draft as a tournament format since he was so good at it. Katou had also won a Rochester GP the year prior. 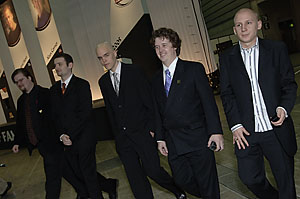 The Hall of Fame 2005 class.While the Germans could not manage the sweep at Worlds in Tokyo, the Japanese pulled it off six years later in Yokohama when Katsuhiro Mori won the World Championships, Kenji Tsumura won the PoY title, and the trio of Masashi Oiso, Takuma Morofuji, and Ichirou Shimura won the team competition over Antonino DeRosa, Jon Sonne, and Neil Reeves.

Simple really...who is going to win and why? Head to the forums and handicap the tournament for us.