love nothing more than poring over a Card Image Gallery (although I hate calling it that—much like with EDH and Shea Stadium I don't use the new terminology readily) and seeing what cards I want to draft; play Constructed formats with; and, of course, identify updates for my (wait for it) Commander deck. Magic 2013 washes up on our tournament shores this weekend at Prerelease events all around the globe. Let's crack open the crate and see what we find. 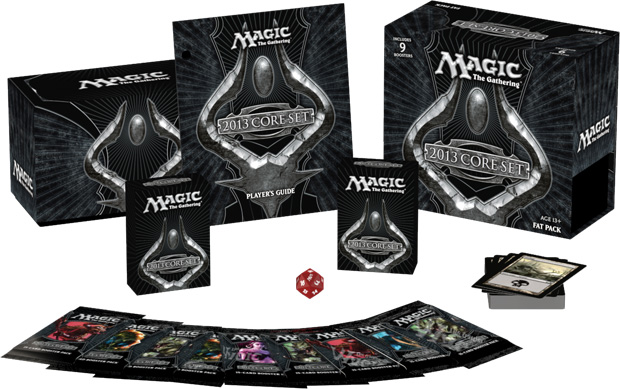 Prerelease for Magic 2013 is this weekend!

Ajani, Caller of the Pride gets things off to an impressive start as the very first card lurking within and goes right to the top of my "Get four copies of this card right now" list. What is not to like about the card? It is cheap to cast and all three abilities are pretty relevant. It even has a little bit of legal jargon ("up to one target creature") that means you don't have to have a creature in play to tick up the Big Cat's loyalty. With all the exalted that is running around in this set you can actually close a game out very quickly with the -3 ability on Ajani.

We now know that Sun Titan will no longer be a Standard weapon once we return to Ravnica and Magic 2012 rotates out of the format. In the meanwhile, I fully expect to see Ajani and the frustrating white six-drop playing together for as long as the head judges will allow you to get away with it. Early on, Ajani can boost your early drops—or even your Inkmoth Nexus—and soften up your opponent by catapulting a double striker over his or her defenses. Later in the game your Sun Titan will bring it back and immediately go up to a 7/7 with Ajani's +1 ability. You can swing (Do creatures with vigilance "swing?" If not, what do they do exactly?) for 14 points of doubly struck damage in the air.

One of the interesting omissions in Magic 2013 is of a four-mana white board sweeper. Day of Judgment will still be kicking around Standard for a few more months, but after that you will need to look to six-mana answers like Planar Cleansing (which does take care of Planeswalkers as well as everything else you want to deal with) or to other colors like black for Mutilate. The (eventual) lack of Day of Judgment makes me excited about a card like Sublime Archangel. It means I might actually get to set something up with that card before my opponent taps

to send me back to square one. 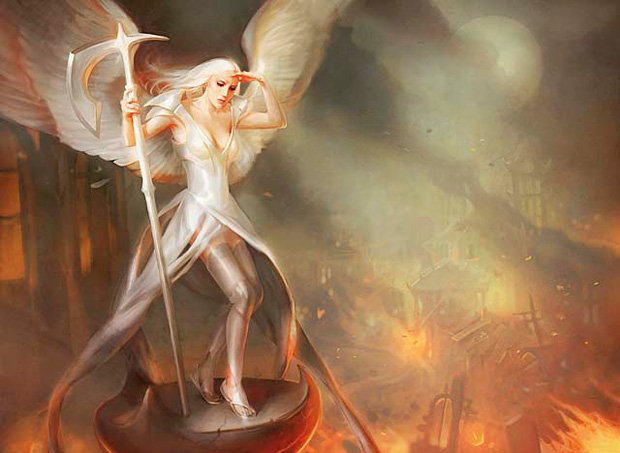 Sublime Archangel is a card that makes a whole host of token generators much more interesting than they would be otherwise. It's one thing to pay four mana for three tokens with Captain's Call and another thing to give your Sublime Archangel an additional +3/+3 when it attacks and get three tokens to boot. The other card I have been thinking about with Sublime Archangel is the briefly overlapping Inkmoth Nexus. With just a Sublime Archangel in play, the Nexus attacks alone as a 3/3 thanks to two exalted triggers. It is not hard to imagine scenarios where you get to finish the game off in two nice chunks of infect damage.

"You love this card don't you?" asked Top Decks author Mike Flores as we were talking our way through the (wait for it) Card Image Gallery the other day. The card in question was Archaeomancer. I had to admit that I did. It was not too much of a leap for Mike to figure that out though since I have always had a soft spot for cards like Scrivener, Anarchist, and Izzet Chronarch—and have tried to play them in Constructed brews with little success. I am going to try again, I'm sure. In exchange for a 1-point downgrade on the power side you get a cheaper overall casting cost and the flexibility of returning an instant or sorcery.

Basically, you get to build your own Deadeye Navigator with Archaeomancer and Ghostly Flicker. You can pair it with Acidic Slime to have Stone Rain with buyback (and by "you can" I mean "I will"), and of course there is always the greedy, greedy fun of getting this merry-go-round spinning with Thragtusk. Every three mana would yield you 5 life and a bonus beast—and possibly a real life disconnect from your opponent.

I have had my butt kicked enough times in Duels of the Planeswalkers by an über-reverse-thresholded Jace's Phantasm that I know I want to try and play with it in an actual deck. I am not sure that 5/5 fliers and milling your opponent have a ton of synergy—not sure I want to be playing Mind Sculpt as Titanic Growth—but if I am already playing Thought Scour I am not opposed to nudging my opponent's yard over the brink.

Talrand, Sky Summoner is one of those cards that just straddles being a slam dunk card I would try to build a deck around and one that gets a few cockeyed looks at FNM before you put it away and play a "real" deck. Talrand is obviously good in a format with Phyrexian spells—Gut Shot, Gitaxian Probe, and Mutagenic Growth all interact pretty sweetly with the Sky Summoner (it also works well with our aforementioned Flicker locks). The place this card really shines is if you get to untap and protect your board position with a series of bounce spells, Essence Scatters, and Rewinds.

Speaking of Duels of the Planeswalkers, is there a more despair-inducing moment in the game than when Nicol Bolas plays an Augur of Bolas and nabs a Cruel Ultimatum that you know you cannot beat in five turns? Augur of Bolas is going to be a Constructed staple in multiple formats and will almost certainly be a part of my sure-to-be-a-disaster-but-I-am-still-trying Archaeomancer deck.

Judging by the twitterverse, everyone is excited about black. Much like the end of the world, pundits always stand around on milk crates and preach to the masses about the return of Mono-Black Control as a viable archetype. While I am pretty sure the world will still be here come the new Standard season I think MBC might be a real thing.

The only thing holding the new Liliana of the Dark Realms back is going to be the old Liliana of the Veil making it tricky to play both cards in the same deck. Throw in Murder and Mutilate (I am assuming someone on the flavor team was watching Raw Deal as they went through the black cards), along with Duress and a little Barter in Blood, and you have the shell of a deck that can attack your opponent on all fronts. I know I am going to be tempted to try and get that Dark Realms emblem and cast Diabolic Revelation—aka Demonic Geyser—for the perfect hand of cards.

Magmaquake is a card that does some interesting things that previous 'quakes have not done. The most relevant being an instant-speed way of dealing with Planeswalkers. Your opponent taps out to play Gideon or Karn—or anything—and you have a clear window to X it out. Even if you can't get all the way there you can soften it up to untap and kill it with a more mundane burn spell. Where Magmaquake really shines is the opportunity to take out multiple Planeswalkers against a control player.

Thundermaw Hellkite is the card I expect to have the hardest time trading for in the coming weeks. Is it the best Dragon ever printed? Why don't you ask those Lingering Souls tokens how they feel about the matter?

Is there something profoundly wrong with me that Fungal Sprouting and Sublime Archangel is the second thing I am thinking about when I look at the green cards? Probably, but that doesn't mean I'm not going to give it a whirl—or open that combination in a Sealed Deck pool. Yes, I would like four tokens and a bonus attack of +5/+5 when I send in my Sublime Archangel.

While green is losing its signature card from the last few Standard iterations—Primeval Titan—it is gaining some exciting weapons from Constructed formats past. I have already written about Rancor and fully expect that card to make its presence known across multiple formats. Quirion Dryad is one of my—and Mike Flores's—all-time favorite windmills to tilt at (double meaning most assuredly intended).

That is Mike's list—my version of the deck actually had the newly reprinted Silklash Spider in the sideboard. Woodland Cemetery, Duress, some Planeswalkers... I can see myself setting those cards aside and waiting for the right week to play those alongside with my treasured Dryads.

Looking through the artifacts, gold cards, and lands, I already wrote about Gilded Lotus last week—a card I think might take the place of Solemn Simulacrum and Primeval Titan in ramp strategies—but one of the cards that stands out for me is Sands of Delirium. I see it as a powerful sideboard card in control matchups where you don't need to do anything until the end of your opponents' turns. They play a spell, you counter it. They play a creature, you kill it. If they do nothing that is fine too. You get to sink all your unused mana into the Sands and can mill your opponents out in pretty short order.

In talking to Flores, he likened Staff of Nin to a Planeswalker your opponent can't attack, which also gets to do two abilities per turn—some overachieving but pricey Jace/Chandra hybrid. Not my cup of tea, but I can certainly see this card doing things. Maybe I can trade one to Mike for a Dragon.

Good luck to everyone playing in a Prerelease this weekend. I will be missing mine as I am away on vacation, but I look forward to getting my hands on some of the cards the following weekend during San Diego Comic Con.