first time I ever remember hearing about Guillaume Wafo-Tapa was after Pro Tour–Columbus in 2005 when Pierre Canali shocked the world with his Affinity deck. In the Top 8 profiles for that event, Pierre shared the design credit for the deck with a pair of Guillaume's, Matignon and Wafo-Tapa (although it was incorrectly transcribed as Wago Tapa at the time.). Two years later, Mssr. Wafo-Tapa was hoisting his own trophy in Yokohama and was kind enough to spend some time with me discussing how he got from being Canali's lab partner for Columbus to the Yokohama spotlight. 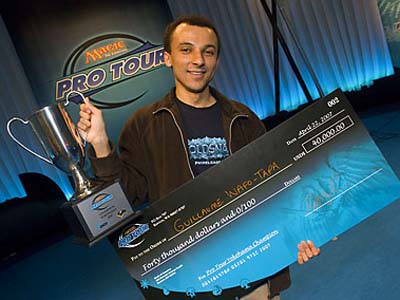 Like most Magic players, the 25-year-old from Nantes, France started playing Magic in school. It wasn't long before his group was playing the game every free chance they had, but it wasn't until he graduated high school that he took his play to the next level.

"I moved to a bigger town to pursue my studies at the University," explained Wafo-Tapa. "That's when and where I discovered organized play. I met some players in the area that were often going to PTQs and I got immediately interested."

I had assumed that, like his friend Pierre, Columbus was Guillaume's first Pro Tour experience but Wafo-Tapa actually picked up his first Pro Points in Barcelona during the 2001 season. He claimed that he was ill-prepared for the level of the draft competition. There was a smattering of additional appearances before he experienced success on the Pro Tour – even if it was just someone else playing the deck he had a hand in designing. Not that he played that deck himself...

"I'm a control player at heart," he confessed to the surprise of absolutely nobody. "I rarely play aggressive decks in tournaments. I played a variant of awakening control. I believe the deck was really strong but sadly due to poor plays on my part, once again, I couldn't achieve Day 2."

Guillaume languished in the PTQ ranks for the rest of the 2005 season. Although he did close out the year with a Top 16 finish at Grand Prix–Bilbao, piloting the same Mirari's Wake deck he used at a PTQ weeks earlier to earn an invite to Pro Tour–Honolulu where his name would become part of the Standard landscape.

The deck was called Counter-Mizzet in the coverage but after the tournament the deck emerged from Mike Flores's deck lab (sans the red) as Blue-white Wafo-Tapa. Even if most players did not know the quiet French player who originated the deck, they were well aware of his name from playing against his namesake deck at FNM. Ironically Guillaume himself was unfamiliar with the updated version.

"I remember having seen the article on Star City," he explained. "Unfortunately, since I was not a member, I could not read it at the time. Then I forgot about it, so I never got to see it."

In 2006, Guillaume broke new ground as he achieved the first Top 8 of his career at Grand Prix–Torino and quickly followed it up with another before making it to the Top 32 of Pro Tour–Kobe. Not only was Torino his first Top 8, but it was the first time Guillaume experienced success in Limited at the highest levels of competition.

That reputation was cemented at Worlds at the end of the 2006 season, when another of his fiendish creations became a Standard standard – Dralnu du Louvre. Guillaume went 5-1 with the blue-black build but that was the only portion of his weekend that went well. He found the deck almost immediately after looking at the Time Spiral spoiler.

Guillaume knew – putting any metagame considerations to the side – that the deck would be good. It was the control player's dream since its pilot never really had to tap out on his own turn. Thanks to Teferi everything could be played – and with Teachings tutored for – at instant speed.

Despite his poor finish to the season in Paris, the combination of a Top 16, a Top 32, and two Grand Prix Top 8 appearances was enough to propel him up to Level 4 in the Pro Players Club, which locked him into being more than qualified for all of this season's events. He made quick use of his level, kicking off the season with the second Top 16 finish of his career.

Once again Guillaume found success with the 40-card decks, this time in Geneva. During my walk to the booth in Yokohama, I ran into Dane Young an American player who finished in the Top 16 last weekend. He was not sure how he should feel – encouraged or discouraged – about his finish after being so close to a Top 8. I posed the question to Guillaume about his near misses in Geneva and Honolulu.

"Definitely encouraged," he replied. "After my awful Day Two at Worlds, I lost a bit of faith, asking myself how it had gone so wrong. So I was happy to make Top 16 in Geneva."

Next up for Guillaume was Pro Tour–Yokohama. So just how does a Constructed specialist prepare for a new Constructed format? I wanted to get a look inside his process of deck design, as well as when he knew he was a talented deck designer.

"I began by building a few decks on my own," he said. "It's important to design your decks first, before you see what works on Magic Online or what others have done. Because after that your ideas are biased. After that I gathered with Pierre Canali, Bastien Perez and Jonathan Rispal to test for a week. And finally we tested with the Ruel brothers near the end. Of course, MTGO was a part of the equation all along the way.

"I like to play with my own decks or at least decks under the radar," he continued. "I saw pretty quickly I could do well with them. I guess that's when I realized I was a good deck builder. I like cards that pose a deckbuilding challenge like Wild Pair – such an interesting card to build around. I dedicated a lot of time to it but sadly we couldn't find a build that did well against Dralnu in the block.

"Like I said, I almost always play control decks. But of course, if one day I think I can break a format with a combo or agro deck, I would play it. And sometimes, even when playing control, you're the beatdown."

His last comment segued perfectly into my next question. During the lunch break Guillaume lamented the presence of Triskelavus and Academy Ruins in his deck, citing that as the only change he would make to the list. Despite those comments he went on to win a critical game against Mark Herberholz in the semifinals on the back of those two cards.

"Triskelavus is essentially amazing against White Weenie," Guillaume explained. "And it's good against control after sideboarding because the Damnations go. I didn't expect it to be so good against Mark, but I think it essentially made Game 2. The first game was more luck on my part by drawing Urza's Factory before Mark. Now with White Weenie out of the equation due to its poor results, I think Triskelavus has to go too."

Guillaume had not given much thought to what changes he would make to the deck with Future Sight as he still has a Grand Prix in this exact format to worry about in a couple of weeks. He did admit to being drawn to Heezy's maindeck configuration in recasting the deck for the post-PT environment.

"There are not really big differences," he said of the two decks. "Our decks are pretty close. Mark opted to maindeck a lot of 1-ofs to tutor for while I preferred to keep a straight deck. Though now, I would probably add the white in the main like he did at least for Pull from Eternity because I would expect a lot of Aeon Chroniclers maindeck."

Did you miss the live webcast? Don't have time to watch the full 90-minute archive video of Guillaume Wafo-Tapa dispatching Kazuya Mitamura in the finals of Pro Tour–Yokohama? Check out our Finals Highlights, fresh from the editing bay of Mr. Evan Erwin.

Firestarter: Blocking out the Block PTQs

Several of the Tournament Center video features Randy Buehler and I did in Yokohama were deck techs, including three of the Top 8 decks.

Looking at these, the other deck tech pieces, the Top 8 decklists, and the decks that did well on Day Two, which deck do you think you are most likely to use as a foundation for the upcoming PTQ season? What cards does Future Sight offer that you are excited to add to any of these decks? What new decks seem viable? As always the forums are yours to share your thoughts and tech with the world.