o say that I am excited about the release of the back end of the 2012 Grand Prix schedule is something of an understatement. There is a lot to be excited about—just take a look for yourself...

Obviously, holding a Grand Prix for the first time in Costa Rica is cause for excitement, but that's not what has me banging on the exclamation point key and already booking my ticket to actually go play in a GP. Originally announced as GP San Francisco, the third Grand Prix of the season has relocated to Luis Scott-Vargas's backyard of San Jose, California (not to be confused with the event a month earlier in San Jose, Costa Rica). A Grand Prix in the hometown of the most famous and successful team in Magic is also an exciting announcement, but it is the hidden format for the event that has me bubbling.

Three-person team Limited is easily my favorite format in the history of Magic. Limited is pretty amazing to begin with, but then add in two friends and it just gets better. This has been a rumored event for the past two years, but it was not until the advent of the expanded Grand Prix schedule that Wizards of the Coast was able to take a chance on a format that has not always pulled the same numbers as individual Grand Prix. I spoke with Magic Organized Play Program Manager Scott Larabee about how formats are assigned to specific cities. 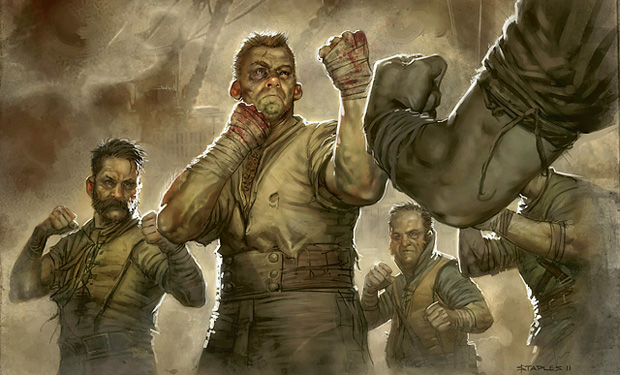 "Grand Prix are scheduled first, then formats are applied," said Larabee. "Also, if a Standard round of PTQs is going on, we schedule fewer Standard GPs. Just about any city can be scheduled with any format. Exceptions would be Legacy, Block Constructed, and—to a lesser extent—Modern. These we will tend to put in cities where we expect a more robust attendance or are central to larger populations of players. However, Grand Prix held in emerging markets (Costa Rica, Moscow, etc.) may be more likely to be run Sealed Deck."

As the formats were being sorted out for this slate of cities there was an opportunity to try something new.

"With the expanded GP schedule, we have some room to try things out," explained Director of Magic R&D Aaron Forsythe—a two-time Team Sealed Pro Tour Sunday competitor. "One thing people keep asking me for are team events. I've always enjoyed them, so why not? If it works well, we'll do more. If it doesn't, then we spent a tiny fraction of our GP schedule to learn something."

The team responsible for deciding formats went back and forth between Limited and Constructed for the team event. The preference was for Limited, but Team Rochester Draft—the format that has been historically used for Day Two in these events—was not something Aaron felt comfortable asking players new to the team experience to dive into. 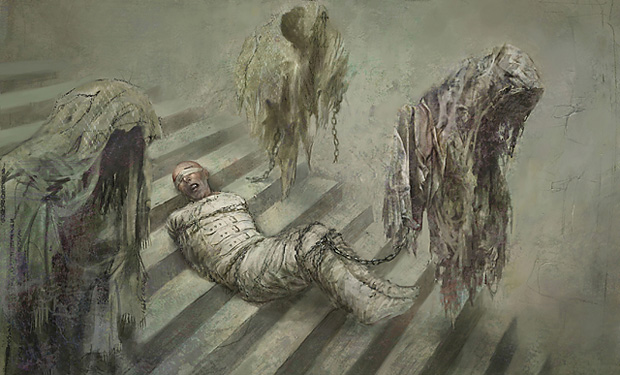 The format for Day One will be Team Sealed. Each three-person team will receive twelve packs of this fall’s set that they will use to build three decks and sideboards—all the cards in the card pool must be assigned among the three teammates. These decks will be what the team uses for all the rounds on Day One.

"The current plan is for all teams with X–2 or better records to advance to Day Two," explained Forsythe. "Because we want to squeeze in as many rounds as we can, there's only going to be one deck build on Day One—some previous events had multiple deck builds. Team Sealed is lower variance than regular Sealed, and we don't give people multiple decks in normal Limited GPs, so I'm sure one deck build will work out fine here."

But on Day Two, things will be different than past Team Limited Grand Prix.

"We're ditching Team Rochester," said Forsythe. "That format is so alien and uncomfortable for most players that I don't see any benefit to highlighting it—and I made the Top 4 of two Pro Tours using that format, so I'm qualified to speak on its pros and cons. Most players I see doing team drafts do 3–on–3 booster drafts, so I really wanted to find a way to make that work." 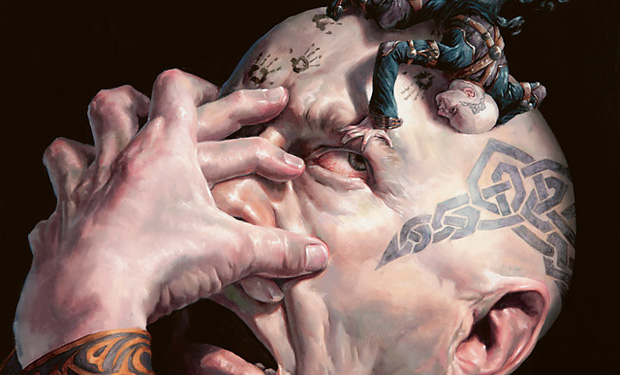 Teams are going to booster draft against each other, with teammates sitting at alternating seats. The teams will then play two rounds against each other—with players being paired each round by the tournament software—that will count as two separate rounds in the standings. If a team wins two or three of its matches (or one with two other draws) in a round it will win that round and get three points—just like a player would get for winning a round at a traditional individual competition.

"I'm not sure how many drafts we'll squeeze into Day Two or how many teams will make the single elimination rounds, but we'll figure that out soon," promised Forsythe. "Day Two was always a problem because I know Team Rochester is talked about by top players as some deified ultimate test of skill, but no one actually plays it. I did one with a bunch of pros in Honolulu just to confirm my suspicions, and I was right. It was stressful, over too fast—only one round with your deck—and used a bunch of skills that the average FNM player neither cares about nor ever needs to have. So I set out to find some way to make things work. I talked on Twitter to a bunch of people about how to make team booster drafts work. It was an idea from Conley Woods that sent me down the path that we're going to use in San Jose."

With teammates able to speak to each other while they play their rounds, Forsythe explained that this Grand Prix will provide a unique play experience not available at any other high-level competition.

"Magic is generally a pretty isolated experience. No one is allowed to talk to you or help you in a normal tournament—you just have to sit there under everyone's burning gaze and hope you don't screw up. But in team events, you can ask if you aren't sure about something, root for your friends, and have a group experience." 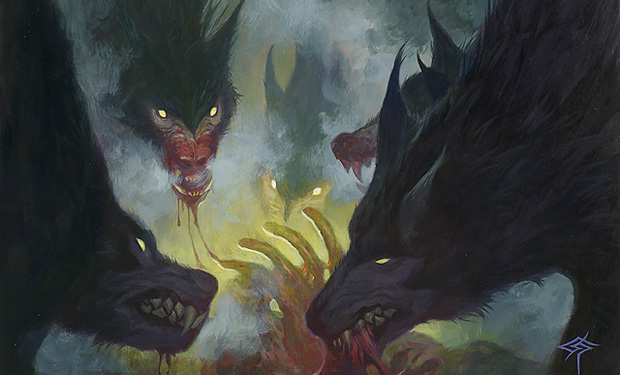 It has been more than seven years since the last Team Limited events at a Grand Prix level and I asked Forsythe what kind of turnout was needed to ensure we have another one at a pace quicker than the emergence cycle of locusts.

"I'm not sure," he admitted. "I imagine it's something like 80% of a normal GP. Web viewership and readership will also play into the success metrics. I don't want this to be a tree falling in the forest that no one hears. Lack of fan interest was a big issue for team events when we were running them before."

It is not just the opportunity to try out new formats that makes the expanded Grand Prix schedule so exciting. Bringing the GP experience to new cities—as well as revisiting old favorites—has been an exciting surprise for Larabee.

"Cities like Lincoln; Charleston; and San Jose, Costa Rica are perfect examples," he explained. "Block Constructed and Team Sealed are examples for format options that are now possible due to the expanded schedule. Going to smaller cities will work. Lincoln and Salt Lake City stand out here. We hope to bring the GP to similar cities. We don't have to stick with just the major cities in a given country." 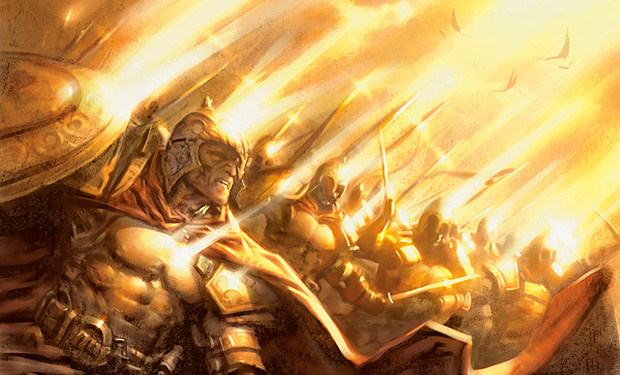 Honor of the Pure | Art by Greg Staples

"There's a big demand for these kinds of events!" agreed Forsythe. "The attendance hasn't really slowed down even though we're running so many now. The Top 4 invitations will take some getting used to—the weight of history is strong—and we have to iron some stuff out with the number of byes versus the number of rounds we're running. But these are all good problems to have. There's a lot of good Magic being played, great coverage, and a lot of compelling stories." 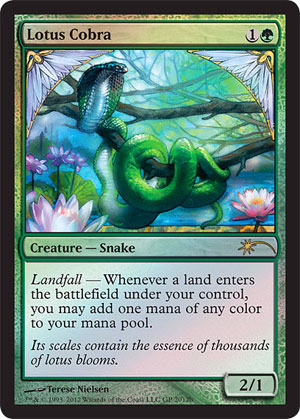 It is a pretty exciting Grand Prix announcement for me for multiple reasons. While I impatiently wait for October to get here, I will spend the summer collecting my play set of promotional Lotus Cobras—one of my all-time favorite cards—which are being given away starting with Grand Prix Atlanta over the June 30–July 1 weekend. Maybe I can take them to Chicago or Toronto to play in a Modern Grand Prix. What Grand Prix will you be attending? You can find the entire schedule here. Whether you decided to play Limited, Standard, Modern, or Team Limited, I am sure I will see you somewhere soon!

*Lest I be accused of padding word count, that entire block of text counts as just one word. This footnote, however...