all accounts the Ravnica Prerelease weekend was a smashing success. Tournament organizers reported big spikes in attendance (as well as medium Johnies and smallish Timmies) all over the world. Players seem excited – I know my local draft mailing list has been buzzing with activity – and the early word seems to be extremely positive from both a Limited and Constructed perspective.

If you missed all the fun or simply don't live within range of a Prerelease, you can join in the multi-color madness at release events at stores all over the world October 7-9. The format is Sealed Deck or Booster Draft and prizes include packs of the set and unique items. While supplies last, everyone who shows up gets a Ravnica foil card (which will be revealed next week), and the top three finishers and one door prize winner will get a Ravnica life counter (pictured right).

While I did manage to sneak into Neutral Ground late Sunday afternoon with garment bag in tow (for that story, you'll have to read farther down the column), I have not had the chance to play Sealed Deck with the new cards yet – only a handful of drafts. I am looking forward to remedying this next Saturday.

One of the tournaments that I discussed in my primer that you see at Prereleases is the Big Flight. Not every organizer offers this tournament, but it is very popular for that ones that do. How popular? Well, Mike Guptil (of the oh-so Professional Event Services) held a 203-person tournament on Saturday morning (in addition to flight after flight of 64 players throughout the weekend) in Columbus, Ohio.

When the dust settled from the Big Flight, only one player was left standing with a perfect 8-0 record. Thomas DiFrancsico, playing in his very first DCI-sanctioned Magic tournament, trampled through the field with the forces of the Golgari at his command. For his efforts, Thomas was rewarded with two boxes of Ravnica boosters. Here is the deck that Thomas used:

1 Disembowel 1 Gaze of the Gorgon

While this was Thomas' first DCI-sanctioned tournament, it was far from his first experience with the game. In fact, Thomas has been playing the game on and off since the release of Revised a decade ago, although he considers himself more of a collector and casual player.

“I've always been fascinated by the game. A particular friend and I kinda got each other going in the game about 10 years ago and we have been pushing each other to break MTG theory ever since," explained Thomas.

As to why he decided to take the plunge and play in a tournament after all these years: “That same friend, Clinton Karr, a.k.a. TheOriginalGasFace on MTGO. That, and I really wanted to play the new set before it came out, and of course the opportunity for free cards if I won."

Thomas was surprised that the Bramble Elemental/Fists combo worked as well as it did, but the card that really caught him off guard was a flyer with some unimpressive stats in the lower righthand corner.

“Stinkweed Imp was also among the better than originally thought," he said. “He completely stalled the air attack. He single-handedly can scare off 8/8 flyers. Everybody played a role, either removal, stompy, acceleration, fixing, and stall."

I asked Thomas for a scouting report on what colors seemed most played.

“I thought white and green were the most played, and blue the most splashed. Most seemed to want to abuse two guilds in three colors. I actually credit this as being one of the reasons I won. I only had to worry about two colors, and I had acceleration and fixing. Most other people had to worry about getting that third color down. There were a couple off-guild two colors that I crossed along the way."

There is only one way to go in Sealed, as far as Thomas is concerned (and since he lost only three games on the day, his opinion merits attention). “Golgari = broken. I learned that firsthand. This deck steamrolled the field. If 8-0 isn't enough, check out these other facts about my performance: No. 1 - No rares in the deck; No. 2 - Didn't sideboard once in eight matches; No. 3 - Only one match took me longer than 20 minutes to win."

So after putting it off for 10 years, what did Thomas think of his first sanctioned tournament? “Fun! Not many rules hassles or rude players. Everything went great for my first DCI experience."

I did not get to play in a Sealed Deck tournament due to a wedding Saturday evening. After shaking off a champagne headache Sunday morning, I managed to get to Neutral Ground by the afternoon as the two final drafts of the weekend were signing up. I hopped into the one that was starting while I waited for my friends to finish up their tournaments so we could draft amongst ourselves (assuming everyone managed to win some packs).

I have been to just about every prerelease with the exception of two – and one of those was the Ice Age Prerelease in Toronto, Canada – and yet I was still excited as I sat down to open my first pack of Ravnica. There were no dual lands or Birds to tempt me to rare draft so I took a Watchwolf with my first pick and followed it up with Seeds of Strength. My third pick was Faith's Fetters followed by another Seeds. I was happily settling into green-white until I saw a fifth-pick Skyknight Legionnaire.

From looking through the cards that my friends had shown me (I actually did not look at any spoilers before attending) and talking to people who had drafted a lot on Sunday, the word was that red-white was the best draft deck if you could get it. I hadn't passed anything from the Boros guild to my left and a fifth pick of this caliber seemed like a pretty good indication that it was not being taken to my right, so I took the flyer. I picked a couple of mediocre red cards like Goblin Spelunkers and Ordruun Commando to round out the pack and waited for pack two to see which guild the second pack would lead me toward.

I took two Veteran Armorers and another Faith's Fetters in my early picks and was still unsure if my white would be accompanied by green or red when I was passed another Legionnaire, followed by a late Viashino Fangtail and Thundersong Trumpeter. I tucked my green cards away in the back of my stack and settled in for my first adventure with the Boros guild.

I ended up with a few more Veteran Armorers and a couple of removal spells – I was passed Lightning Helix in the third pack. Here is the deck I ended up playing.

The deck ended up being pretty brutal. The only thing I would have changed would have been to include a couple of additional creatures from the sideboard and cut one land and the Flash Conscription. I hear green is pretty good but this and blue-black are the only two decks I have had any success with. What about you? Has anyone had success with non-guild colors? 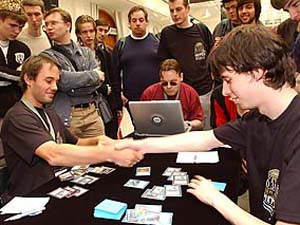 Linov, right, defeated Antoine Ruel with a black-blue concoction.Kudos to everyone who correctly anticipated that the first pick in the Russian Ninth Edition Rotisserie draft would be Loxodon Warhammer. That is exactly what Julien Nuijten did in the unenviable first position during the Top 8 draft in last weekend's Invitational. The eighth draft position turned out to be the victorious seat as Matvey Linov wheeled Confiscate and Mahamoti Djinn with the eighth and ninth picks.

Matt ended up being the only player to choose a blue card until Antoine Ruel took Tidings in the fourth go around the table. Antoine ended up with a blue-red deck that featured only two creatures and plenty of board control and removal. Neither Matvey nor Antoine even took a loss in the Top 8 until they played each other in the finals. That match went to five games before the Local Hero emerged victorious.

Read up on all the coverage from what sounded like a very fun event.

You may know Jon Becker as the sideline reporter at the Pro Tour and the lovable curmudgeon from his rare guest appearances as a Magic writer on various sites. Jon is also an avid drafter and long-time Prerelease veteran. He attended the Philadelphia Prerelease and played in two 32-person flights Saturday. His card pool for the first one presented no tough decisions, begging for a green-white-red deck to be built. Jon obliged and quickly swept through three rounds to take down two handfuls of booster packs.

Jon quickly signed up for another one and found himself looking at a powerful but challenging card pool. Jon ultimately questioned the deck he built as he fell one game short of sweeping his second tournament and lost in the finals – he only got one handful of packs this time.

As for the deck he ended up playing, I will post it in the forums over the weekend, but in the meantime I was curious to hear what you would have done with the same set of cards. Consider this the Firestarter for the week – use the forums to post your approach to this card pool. What are the strongest colors? What are the key cards? (There is one unknown card in the card pool, but Jon assures me it was something unplayable that he either tore up for counters or used a divider in his card box.)