appy New Year everyone! I hope you are doing a better job of sticking to your resolutions than I am. Not only is the laundry-festooned exercise bike staring at me accusingly, but after making initial plans to attend a PTQ in either Maine or Toronto I am going to be staying close to home this weekend to watch the Giants/Panthers playoff game. I will have more on the PTQ scene in a few hundred words, but first there is some exciting news to kick off the New Year. 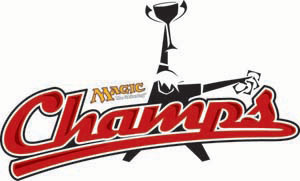 Champs is an important Standard tournament that straddles the gap between casual and competitive players, always taking place shortly after the release of the new stand-alone each year. The event started out years back as State Championships, and as it crept across the border into Canada it became State and Provincial Championships. Before long it had more names that I do and was State/Province/Territory/Island/Prefecture Championships. Now it is simply Champs, although it is no longer simply Standard.

This year, we'll see the launch of two new Champs formats. The first new event will be the Limited Two-Headed Giant Championships on March 18. Teams competing in these events will receive one Tournament Pack (starter deck) and four boosters to build a pair of decks. The Top 8 teams will win prizes ranging from alternate art foil cards to booster packs, plus there will be participation foils given out as door prizes.

Even more exciting to me is the announcement that on June 24 I will be able to play in the individual Limited Champs. Back when I was still running these events as opposed to writing about them, I recall running Limited State Championships and have always pined for their return. The prize details haven't been confirmed yet, but you can probably expect some foil action there too. Fans of the 60-card decks need not fear for the staple Standard event – it remains unaffected and will take place on October 21.

I caught up with Magic: The Gathering Assistant Brand Manager/Deckspert Jake Theis to get some more information about the expansion of the program to three events.

"The expansion process actually happened very rapidly," explained Theis. "Champs has a pretty easy-to-define hook. The attraction of the program is pretty simple – who wouldn't want to be the best in their area? If I rule my home, then my hobby shop, it's only natural that I would want to see how my skills compare to others in my area. It really means something to hold a title, to be the best. To me, pride is the best prize, and Champs really will deliver that prize."

Theis explained that Champs is traditionally a jumping-off point for tournament-level players as the next step after attending Prereleases and in-store events. Champs will allow fledgling players to stretch their tournament legs in a wide variety of formats.

"Plus, the three events also allow for the possibility of a Triple Crown Champion," Theis added. Tantalized by a possibility he hadn't considered before, he made an on-the-spot promise, "How cool would that be? If someone can pull off the impossible and lock down a Triple Crown Championship, I will make sure that Wizards makes it worth their while."

The success of last year's Two-Headed Giant events with the launch of the new rules inspired Wizards to kick off the program's expansion with the team format.

"I'm very proud of the Two-Headed Giant format," Theis beamed. "Every department in our company really came together to make it a success. Most players begin playing Magic in multiplayer formats, and the new Two-Headed Giant rules give a clear, universal way to play the game.

"We chose Two-Headed Giant as a Champs program, because the idea of a team Championship is very attractive. You and a buddy against the world...or a state, province, etc., in this case. I know that when I was playing competitively, there were some amazing players in my community that for various reasons wouldn't play in sanctioned Magic events. 2HG is the perfect way to bring in that cantankerous partner, who just happens to rock at Magic. 48 Hours, anyone??? I guess Rush Hour is a more current reference...sigh."

Theis also explained the thinking behind adding Limited Champs to the schedule. "When we were shopping for the third Champs program for the year, we noticed that we didn't have many opportunities for players to participate in large-scale Limited events through the year. Also, Ravnica-Guildpact-Dissension Limited should turn out to be a format that people will talk about for years. The combination of these two factors makes Limited Champs a must-play event."

I tried to wheedle the details of the new card prizes that are being offered for these events but Jake was not ready to let that particular feline out of the dice bag. He promised "that they will be amazing. We are using a new promo card concept, and I think players will get a kick out of them." Details will be made available in the coming weeks here on magicthegathering.com.

Jake also teased that the prizes for each of the three Champs events will be different. Perhaps tired of me calling him The Deckspert, he offered the following cattle call for feedback.

Mark your calendars for these three Champs events!

"I would like players to give us some feedback on what they'd like to see. In fact, why don't they email you, the one and only BDM, and tell you what they would want for Top 8 prizes? Magic is all about player empowerment...and torturing Brian David-Marshall."

One of the prizes that will be consistent throughout the year will be photos of the winners showcased on the Champs results pages. Theis was especially excited of the idea, which happened to be his brainchild. I asked him where the idea originated.

"Currently, we showcase Top 8 decklists with the players' names and their Champs region. This is the logical extension of that initiative. Win Champs; Win Fame. You see, Brian, I'm a pretty vain, egotistical guy...and beautiful, too. I was thinking what would I want if I was state champion? Cards? Yes. Local notoriety? Yes. The immortality of seeing my picture showcased on magicthegathering.com for a year? You betcha."

I also expressed my gratitude to Jake for the streamlining the name of the program to the simple and efficient "Champs", knowing that that I will be grateful to not have to type in all the damn prefixes that had been accumulating around the event.

"Viva Champs!" proclaimed The Deckspert. "One of the exciting things about Magic is that it is a global game. It is printed in nine languages and played in dozens of countries. Many of Wizards' early initiatives logically were focused on the Western Hemisphere, but as the game has grown, our offerings have had to change. Initially, we had a state champs program but not every country has states. Champs is bigger than States, bigger than Canadian provinces, too. Yes, I said bigger than Canada. Champs is a program where anyone can enter and compete to be the best.

"I want players to view Champs as their way to grab the ball and start running. If you want to be a top Magic player and haven't been to a tournament yet, show up to Champs and let's see what you got. If you are currently a top player, why not step up and claim your rightful title?"

For those of you who can't wait until June for Limited Champs, never fear. The Sealed Deck qualifier season for Pro Tour-Prague starts this weekend. While I will be missing events in Maine and Toronto this coming weekend, I did play in a warm-up tournament on New Year's Day for a Time Walk at Neutral Ground in New York City. The New Year's Day Time Walk tournament is a Neutral Ground tradition that goes back to New Year's Day 1996, making this the 11th Time Walk event in the store's history.

After going undefeated in the Swiss, I fell in the semifinals with only some booster packs as a prize to salve my wounds. I was going to post my decklist from the Swiss but instead have decided to list the card pool I had to work with. I am also providing Kevin An's card pool. Kevin was also undefeated in the Swiss. I will follow up next week with the actual decks we both played for six rounds (in a field of approximately 40 players). Please post your builds in the forums – my deck was especially tough to build and I would like to see what you would have done in my shoes.

In 60-card news, the results from The Finals are in! The Finals is a Japanese end-of-year Championship featuring six rounds of Standard and six rounds of Extended followed by a single-elimination Top 8 using the Standard decks.

Masashiro Kuroda – my favorite Magic player of all time – walked away with the hardware. He had plenty of high-profile company in the Top 8 with Pro Tour-Nagoya winner Shu Komuro, Pro Tour-Columbus finalist, Grand Prix Juggernaut Masahiko Morita, and Jon Finkel impersonator Akira Asahara.

I should have an interview with Kuroda for you next week, but in the meantime here are the Top 8 Standard decks for you to gnaw on.

1 Boseiju, Who Shelters All
75 Cards

Akira Asahara - Battle of Wits: "The One"

4 Kagemaro, First to Suffer 1 Wandering Ones 4 Meloku the Clouded Mirror

4 Kagemaro, First to Suffer 1 Wandering Ones 3 Meloku the Clouded Mirror