PTQ season for Hollywood is receding into the distance and Shadowmoor is looming on the horizon. Before all thoughts turn to drafting the new set and the eventual impact on the Standard metagame for Pro Tour–Hollywood, let's take a look back at the Extended format and the cards that made up the 575 different decklists from the Top 8 decklist page. (Yes, I know that 575 is not divisible by 8—some TOs submitted incomplete Top 8s.)

After some quality time with all 575 decklists, a calculator, and some quick fingers, we've skimmed the cream off the top to be left with some interesting Top 8 card lists from those Top 8s.

A quick look at the overall and maindeck lists tells a quick story about the current Extended format; Tarmogoyf is really, really good and people really, really wanted to beat Dredge. There were more Tarmogoyfs and Tormod's Crypts played in the Top 8s of PTQ than any single land card!

Tarmogoyf has been so good that some players just don't feel right NOT playing at least one. Just look at this Balancing Act decklist from Chiba which eschews Tarmogoyf for Terravore but still manages to squeeze one copy in the sideboard...just in case.

Tormod's Crypt came in at number two on the overall list and was a clear number one on the sideboard page of the ledger which is a testament to the power of Dredge—public enemy number one throughout the PTQ season. The Crypt has more utility and actually was one of the reasons that Adam Yurchick made the move to RetroTron for Grand Prix Philadelphia after playing blue-green Tron for a couple of weeks. A Crypt on the table is capable of disrupting the otherwise inevitable Gifts Ungiven packages that lead to your opponent taking all of your turns for you.

Those Leyline of the Voids sitting in the number two slot on the sideboard list are all about Dredge though—often even played in the sideboard of Dredge decks themselves for the mirror and against decks relying on sacrifice outlets to deal with Bridge from Below. You need only look through the past weeks of results and you will often see the Leylines and Crypts right next to each other in players' sideboards. Despite so many decks having anywhere from six to eight sideboard cards to combat Dredge, the deck continued to do well in PTQs and the season in North America closed with two events both handing their blue envelopes to the Al Capone of Extended.

The fact that Pithing Needle is one of the most-played sideboard cards in PTQ Top 8s is a testament to the success of Dredge. The Needle is a great answer to Tormod's Crypt and I would guess that the vast majority of those Needles came out of the board of Dredge and named Crypt more often than any other card.

Also winning a recent PTQ with Dredge was occasional coverage contributor Naoki Shimizu, who made an interesting sideboard decision to bring in Breeding Pool for the flashback on Ancient Grudge (and not the more traditional Ray of Revelation).

4 Leyline of the Void 4 Bridge from Below

Mountains and Islands were the only two basic lands to crack the Top 8 list of maindeck cards, and only Island appears on the overall list. Let's take a quick look at the pecking order of the basic lands in Extended:

Islands may be sixth overall, but if you add in the 167 Snow-Covered Islands the favorite basic land type of control mages everywhere rockets to the number three overall spot (with 831 Islands of some type being played). We look to Japan for a recent example of a snow-covered archetype.

We already looked at a winning deck with Mountains, but one of the emerging Mountain decks in recent weeks has been Goblins which took a couple of blue envelopes and did very well in the Grand Prix Trial portion of Grand Prix–Philadelphia. While the deck did not post as promising results in the big tournament that weekend, it has become a part of the metagame and took second in Maine last weekend.

4 Goblin Ringleader 4 Leyline of the Void

When looking for Forests, Swamps, and Plains they seem to most often appear together in Doran decks—as in this example that recently finished in second place at the Tokyo PTQ that was taken down by (Nearly Mono) Red Deck Wins.

3 Loxodon Hierarch 4 Leyline of the Void

I got more feedback and forum activity on last week's column than any column that didn't feature a controversial decision. It makes me really glad we decided to go with that one last week and forestall the announcement that one rare per Tournament pack of Shadowmoor would be replaced with a Pro Player recipe card featuring one decklist and one of their favorite appetizers (I serve "Guillaume's Bluefish Wafo-Tapas" at all my cocktail parties now).

I did get some feedback from readers who wanted to make sure I was not under the impression that they started—or even played—in stores. Many correspondents and forum posters got into the game casually, through friends, or at school and have never set foot in a tournament and only go to stores to buy their cards before heading straight back to their kitchen table matches.

I get it. I ran a store for many years and some of the very best customers we had never went past the cash register area. They would come in, buy some packs, maybe a couple of key singles, and happily ignore the thriving tournament community we had—and continue to have—in the New York area. One of the many things that makes Magic such a great and enduring game is that players have so many choices about how to interact with it, from highly competitive arenas to social gaming networks to some people I have met who collect the cards solely for the artwork.

As one reader explained to me, Magic can even thrive when players are offered almost no choices at all. Gui Santos wrote:

Well, reading your article, I'd say I'm an exception to your rule. But then again so is everybody else who plays Magic in my island!

Just to clarify: I was born (and lived, until I was 18) in Faial, an island in the Azores Archipelago, smack in the middle of the Atlantic, roughly halfway between Portugal and New York. It is a small island with 15,000 people.

Magic got here around Tempest, I believe, and was sold (still is) as a curiosity in the only novelty shop that existed.

It wasn't a games shop. There was never any organized play or even anyone who clearly knew the rules! People had to get by with the tiny rulebooks that came in preconstructed decks.

I first saw Magic in school, when my classmates played, and they taught me.

I remember that for years people struggled with ever-changing rules, unwritten rules or even just fads in gameplay.

And yet, despite this, Magic flourished here in this little island lost in the Atlantic!

Nowadays there is a solid playing community comprised of several playgroups which meet on a regular basis. There is still no organized play, nor a games shop, and unwritten fads still linger, but Magic has endured.

Gui has since moved to Portugal where he attends university and has begun to play in a more competitive—yet still pretty informal—setting at school. He did report recently rubbing elbows with Tiago Chan at the Morningtide prerelease.

So, hello to everyone on Faial and thanks to Gui for writing. Your letter was a great reminder for me of how infectious the Magic experience can be and of a simpler time when my friend Tony and I would hang out all night playing with our Unlimited starter decks and house rules.

TEPS (a.k.a. The Extended Perfect Storm) was a popular deck throughout the Extended PTQ season and posted some really solid results in the closing weeks. If you want a nice shiny version of one of the deck's kill conditions waiting on the other end of your Burning Wish, then head to Friday Night Magic all April long for a shot at winning one of these... 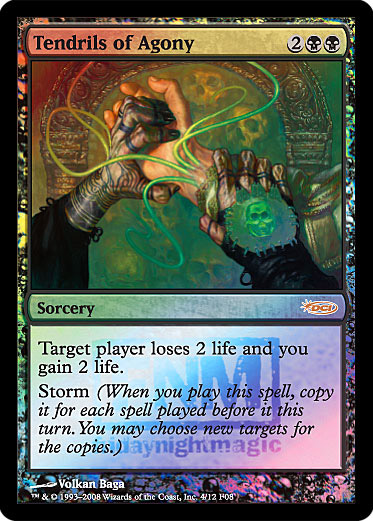 After looking through the top played cards during this Extended season—a season wide open with in excess of twenty viable decks—what are your candidates for the Top 8 decks of the season? You can find all the PTQ Top 8 decklists here and links to Grand Prix coverage here. Share your Top 8 in the forums.