weekend was the first leg of a three-week coverage marathon that has me zigzagging across North America before flying across the International Date Line. Ultimately my adventures will bring me to Singapore for the closing weeks of the Extended season. This coming weekend I am bound for Atlanta to see if Jeroen Remie, Kamiel Cornelissen and Jelger Wiegersma can defend their title, if Itaru Ishida and the gang can finally win one, and what impact Betrayers of Kamigawa will have on Limited play.

But this column is not called the Week That Will Be -- if you want to read ahead on Atlanta you can consult my preview article. This past weekend, I got to travel to the birthplace of Magic (yes, yes, I know it was conceived in Pennsylvania but it was born in Seattle, the same way you were likely born in a hospital but conceived . . . ummm . . . never mind that). I went to Seattle, we'll leave it at that.

I was originally planning on arriving a day sooner than I actually did in order to poke around the office a bit, do an R&D roundtable session (which is still on the table for a future column), and see if I could run my undefeated streak in drafts into double digits against Scott Johns. I had a minor medical emergency early in the week when I was taken to the emergency room with pain in my torso. The words "kidney stones" and "gall bladder", along with "laparoscopic surgery" were mentioned.

Fortunately (at least compared to the options of surgery or passing gravel), it turned out that I had inflamed cartilage in my chest and was sent home with a sigh of relief and a vial of Vicodin. On the unfortunate side of things, it completely upended my schedule, which led to a shorter column last week and less time in Seattle to hang out and enjoy good times -- basically less time to do anything but cover the Grand Prix. 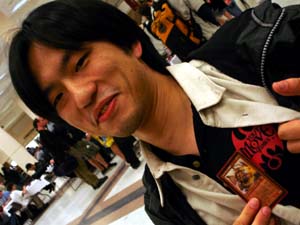 Fujita had a few surprises in Seattle.There were plenty of interesting developments over the weekend, from the arrival of six Japanese players, the dominance of a largely amateur crowd, the reemergence of once-extinct decks like Rock and Tog, and one exciting new deck from Tsuyoshi Fujita. The problem was there was so much more to cover and barely enough time to cover that (thanks to both Mike Thompson and Noah Weil for helping out during the Top 8 while pictures needed to be taken, blurbs needed writing, and deck lists needed typing).

Looking at the coverage, it would be easy to just assume that there were 17 rounds of Extended and then everyone went home. Tim Shields and the good folks of Cascade Games would have had their hands full even if that was all they had to handle, but somehow they managed to pull that off without a hitch and then tossed a half-dozen other cool events on top of that.

Players who failed to make Day Two of the event had plenty of tournaments to keep them busy on Sunday, including a PTQ for Philadelphia, a JSS Challenge, a sealed deck Grand Prix Trial for Grand Prix-Detroit, and a tournament for a booster pack of Summer Magic -- one of the niftier tournament prizes I have seen in some time.

One of the added benefits of holding an event in Seattle is that many of the artists that have contributed to the game's visual library over the year live in the immediate area. Fans were able to get there cards signed by such Magic luminaries as Mark Tedin, Heather Hudson and rk post. I am pretty sure there were even more than that trio was all I could manage to catch a glimpse of through their long lines of fans as I scurried toward the restrooms before the next round started.

Another thing that I would have liked to have delved into deeper were many of the decks that finished outside of the Top 8. I had the chance to meet and talk with Lance Loden who first showed up on these pages in the PTQ Top 8 deck lists page with his creation known as Kiki-Opposition. Lance may have earned an invite this weekend (depending on whether or not Ernie Marchesano was already Q'd) when he finished 11th in the Grand Prix with that same deck.

I watched him play a couple of rounds and the deck seemed surprisingly solid despite any aspersions I and other pundits have cast against the deck's mana base. There are few cards I have a greater fondness for than Tradewind Rider and I was happy to see multiple decks keeping the dream alive. Riki Hayashi ripped through the Grand Prix Trial and continued to tear it up on Day One before running out of gas on Day Two with his Orb Opposition deck, which also featured the blue flier. Interestingly the most powerful card in his deck -- judging by the complaints from his opponents -- was Chalice of the Void. A Chalice for two followed by one set on three is all but game for a Mind's Desire player and also presents some serious challenges to other combos such as Aluren.

So one of the things I never got around to was apologizing to Brian Kibler, who half-kiddingly chastised me for referring to him as retired in my writer's ballot. He admits that he willingly skipped Pro Tour-Columbus (for the final event of his long-running LARP) but only missed Nagoya due to illness. If Brian appears on another ballot, you should consider him very much in play. 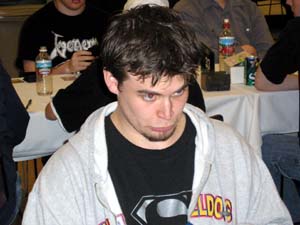 Kibler returned to action in Seattle.He definitely still has a sharp mind for the game and demonstrated what we have all been missing since he stopped writing strategy articles. Kibler was playing the Cephalid Life deck and was paired up with Goblins several times on the weekend. Every time a player with Mountains reached for the sideboard, Kibler was grateful.

"I was so glad to not be writing about this format," Kibler said. "I would have definitely written about how Cephalid Life can't do anything at all about a Blood Moon. That card is insane in the sideboard."

On the bright side, the vindication of being right may prompt to the dragon master to share his thoughts on the Extended format in the near future. And again I apologize if the reports of Kibler's retirement were greatly exaggerated, and should his name pop on a future ballot he has promised two Mesa Chickens in every pot.

Too Close to Call

This race for Rising Star has been one of the closest ones of all the ballots. The lead jockeyed back and forth all week and any of four player were near the top of the ballot at any given time. In the end you can chalk up one more win for Affinity -- Canali Affinity, that is. Pierre Canali nudged out occasional magician Aeo Paquette to ensure the Frenchman a seat in front of a computer monitor at E3 this May.

This week's ballot is another intriguing new category that is sure to spark some debate. Resident Genius is reserved for the game's mad scientists -- great deck designers, Team Rochester generals, seemingly unbeatable foes, sound theorists, and the game's great minds. Each of the candidates fell into this category for pretty disparate reasons and it will be interesting to see how the Magic community ascribes value to those characteristics. I have a pretty good idea about who I think will win, but I have been surprised before during this series of ballots.

So I was running around all weekend doing coverage but I have no idea what you the magicthegathering.com readers are looking to get out of event coverage. This is your chance to tell me. You can click on the 'discuss' button to be whisked to the forums where you can answer questions like: Do you guys like reading feature matches? Do you want to see more deck tech pieces? What about personality pieces about the players and the teams that come to events? What do you look for from Limited events?

Do you even read the coverage?

Is this thing on?