Editor's note: Additions have been made to this column since it was originally posted.

last year's baseball season both Albert Pujols and Derek Lee threatened to capture the elusive Triple Crown title for batting. To win the Crown a player needs to lead his league in batting average, runs batted in, and home runs. It is one of the most difficult achievements in the baseball. No one has won it since Carl Yastrzemski in 1967, and the nature of modern baseball makes it extremely unlikely that it will happen anytime soon.

In the world of four-legged sports, the Triple Crown of Thoroughbred Racing involves winning the Kentucky Derby, the Preakness, and the Belmont Stakes. Many horse experts felt that this year's Derby winner, Barbaro, was well-suited to winning on all three tracks but after shattering his leg at the start of the second race is just lucky to be alive. The last horse to win all three was Affirmed in 1978 – a 28-year drought.

Of course, Magic did not really have a good Triple Crown achievement to strive for until the expansion of the Champs program this season. Now the possibility exists for a player to win Two-Headed Giant, Limited, and Standard Champs in one calendar year. Standard has been the only Champs offered for the past few seasons (although there have been Limited Champs in the past).

Pro Tour-Los Angeles finalist Billy Moreno was well aware of the possibility of the trifecta when he attended New York Champs this past weekend. Billy had previously won the Texas 2HG Champs with Grand Prix-Toronto semifinalist Kyle Sanchez. Moreno, who now resides full time in New York City, only lost once during the Swiss rounds and drafted a solid deck in the Top 8. He ran afoul of Scott McCord in the semifinals – the same person who handed him his one Swiss loss – and his North American Triple Crown dream came to a crashing halt.

Given Moreno's exceptional track record in Constructed events, it seemed like he was a great candidate once he reached the elimination rounds in New York. You have to figure that the man who reached the finals of Pro Tour-Los Angeles with his MadTog creation and then finished in a virtual tie for eighth in Honolulu should be able to break Standard after Time Spiral rotates into the mix. One down and 60 more Champs to go.

There were actually 61 opportunities for a North American player to get two-thirds of the way to achieving the title. While the details have not been made public, rumor has it that Magic Assistant Brand Manager Jake Theis is going to present a North American Triple Crown winner with an “insane” or “ridiculous” prize. After this weekend there were at least seven players in a position to discover how insane or ridiculous the rumored prize could be. (Not all June 24 events had reported their results as of the writing of this column, with a few names added since it was originally published.)

In similar last-minute fashion I managed to flag down the 27-year-old consulting-firm associate to discuss his two wins and what it will take for him to don the Triple Crown.

Semion plays regularly at Dream Wizards in Rockville, Maryland and has been slinging spells since Ice Age. He was initially attracted to the Champs competition for the love of the game. 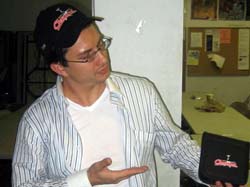 Semion Bezrukov shows off his June Champs prize.“After all, those dragons won't summon themselves!” he joked. “The 2HG format is fundamentally fun. I think I passed on a date just to attend – you see, that is how the true Planeswalkers roll. Once we won the first tourney I REALLY wanted to win the next one back-to-back.”

It is easy to lump 2HG and Limited Champs together as a pair of Sealed Deck tournaments but the two formats are very different. Not only are there interpersonal politics to consider, but the formats require very different card valuations. Semion's partner for the first tournament was Stephen King. While Semion was the so-called dominant head, he was quick to point out that he and King shared all the decision-making responsibilities.

“I think that is a critical component of success in any team-related sport,” explained Semion. As for the differences between Limited in Individual and 2HG competition: “In a format where you have double the life, tempo is less of an issue. You have to try and exploit the format-defining rules. This makes concentrated milling approaches and big monsters defining strategies of the format. In the 2HG event we had a Chorus of the Conclave and it was absolutely amazing.” 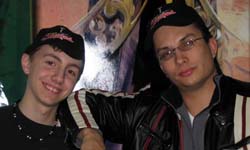 Bezrukov, right, teamed with Stephen King in March at the Two-Headed Giant Champs.Semion is looking forward to his opportunity to complete the sweep once the new Constructed format rotates in as he does not really consider himself a 40-card specialist.

“I'd say I'm more of a Constructed player,” he admitted, which is surprising since he considers Limited to be the tougher to tackle of the two disciplines. “I think that the two formats are unique for different reasons. If you test a LOT you can become a good, even great Constructed player. Limited is trickier, as the pool, in terms of card interactions is larger. There are format-defining drifts as well (players discovering previously thought "terrible" card interactions as very powerful – Eidolons for instance). I'd say Limited is more skill-based.”

2 Pillory of the Sleepless

Semion just missed qualifying for Prague when he took his only loss for an entire PTQ in the finals and is a regular Top 8 competitor at Mid-Atlantic and Northeast PTQs. I fully expect to see him vying for a trip to Kobe in the last weeks of the current season, as he has eyes on higher successes on the Pro Tour.

“I have done OK, though not as well as I would have liked – a money finish at GP Orlando and 33rd at Pro Tour-Columbus,” he recalled. “However, I do have an amusing story regarding my first ever Pro Tour in Yokohama. On Day One I found myself paired against Jeroen Remie. Playing on tilt after the loss in the previous round, I passed with 6 Forests open and Kamahl, Fist of Krosa in hand as my only card. Jeroen calmly untapped and played his own. This was back in the times of the old 'exclusive' legend rule. Strangely, that game did not end well.”

When asked about his current Magic goals, Semion joked, “Well, aside from the usual PT aspirations, winning an FMN now and then couldn't hurt.”

Neither would securing a Magic Triple Crown, and the mysterious prize that will come with such an achievement.

“I was not aware of this prize. Can you reveal what it is?” he poked after learning of the rumor of a larger honor for a North American Triple Crown. “Regardless, I will give my best to be the first in achieving the trifecta.”

I guess you will just have to win in order to find out, Semion.

Diabolical Deckspert Jake Theis has not been very forthcoming when it comes to the details regarding this “ridiculous” and/or “insane” prize should Semion, Guillaume, Aaron, Thomas, Brett, Wilbert, and/or Robert manage to don the Triple Crown. What do you think would be an appropriate tribute for this achievement? Queue up in the forums and share your ideas. If you also want to share any stories from this weekend's Champs…all the better.