ow does a person go from fledgling Magic player to a two-time Grand Prix champion looking to jumpstart his or her Pro Tour career? For Grand Prix Philadelphia Champion Frank Skarren, it all started with his admiration for the illustration of Enormous Baloth from Legions. Now a twenty-three-year-old strategy writer with a day job, Skarren was once a middle school student who stumbled across Magic being played in the school library. 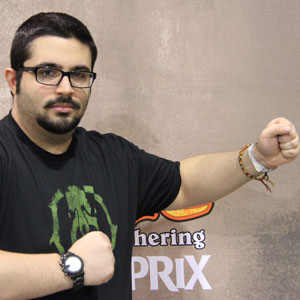 "A bunch of kids would horde around the tables in the library to trade and battle late into the evening. For some reason, I was absolutely in love with the Legions version of Enormous Baloth that one of the better players had in his binder. Since the law of the library required me to trade him for it, I promptly rushed home and begged my mom to buy me some booster packs. The next day, the kid and I worked out the deal that got me into Magic for the long haul: my Polluted Delta for his Enormous Baloth." Skarren laughed about the lopsided deal. "Best trade of my life."

Many years later, the game has taken up permanent residence in his life. Skarren is an avid computer gamer with a full-time job that leaves him a precious allotment of free time each week. He can usually be found at a Magic tournament somewhere, playing the game the way he prefers it to be played—across the table from another player, with physical cards held firmly in hand.

"With work and a good portion of my Magic playing friends scattered across the globe, it can be hard to get a group together during the week to play. On the weekends, I'm either traveling to a Grand Prix/PTQ or heading down to my local store to hang out and do some drafts. If nothing else, it is safe to say Magic is on my mind a healthy majority of the week," said the two-time GP Champion.

For many years, Skarren was just happy to be playing Magic with his friends, many of whom were playing the game at a higher level than he was at, but did not push himself to get up to their level. He would play in PTQs but with rogue decks—literally tribal Rogue decks. He wanted the record to reflect that he did notch more than a couple of Cruel Ultimatums with his Knowledge Exploitation/Notorious Throng deck. While he might not have been playing seriously, his friends saw the potential for him to succeed if he chose to do so.

"One day, I was driving around with my best friend and she basically said something to the effect of 'You're so good at this game. It's a complete waste of your talents to not try to take it to the next level.' A couple of weeks later, I went into the city for an Innistrad Limited PTQ and didn't lose a match all day. I haven't looked back since," said Skarren, who had provided his friends with the first glimmer of his Limited prowess back in 2009 at GP Boston.

"Although I wasn't taking the game very seriously at the time, a big road trip with my friends was something I wasn't about to pass up on," recalled Skarren. "The format was M10 Sealed, and after two days of battling I managed to earn myself a Top 64 finish. Although it took me three whole years find my way to another Grand Prix, that finish always stuck in the back of my mind. Not only did it feel good to win a little money playing the game I loved so much, but it gave me confidence that I could roll with the big players."

Conquering the Pro Tour remains on Skarren's to-do list and now that he has qualified for the summer PT—twice, in fact—he can buckle down with his Team TCGPlayer.com teammates and take his career to the next level.

"Oregon will be my sixth [Pro Tour], and even though I haven't had a good finish yet, every single one I've been to is up there for best experiences of my life," gushed Skarren. "The exotic locations, the level of competition, the camaraderie—nothing else compares to it. Becoming a mainstay on the Pro Tour is priority number one for my Magic career. The Pro Tour is Magic at its finest and I want to be a part of it. It is even more important to me now that I've started testing with Team TCGPlayer. I've made some of my best friends by joining their squad, and getting to travel with and play on the Pro Tour with them is the definition of the dream."

In the half decade since Grand Prix Boston, Skarren has done a pretty good job of crossing things off his Magic to-do list. When he won Grand Prix Charlotte last year, he was able to emphatically strikethrough the top item and, in turn, it led to crossing off more items. 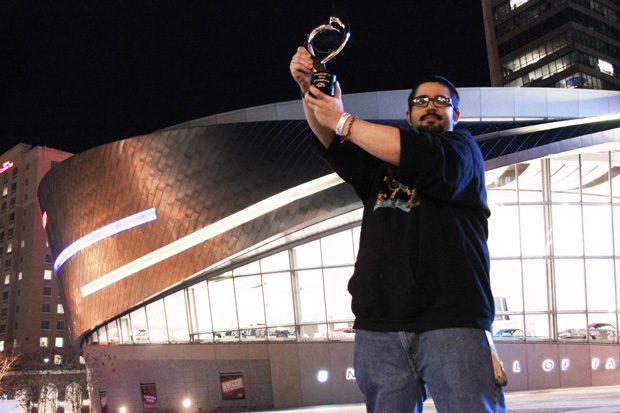 "I really wanted to get my name on the map, and a big win was the best way to do it," said Skarren of his GP Charlotte finals win over Gerard Fabiano. "I wanted to write for a top-level Magic site, get on a Pro Tour team, and gain the general respect of my fellow players. Thanks to GP Charlotte, I was able to land a job writing for StarCityGames and eventually work my way onto Team TCGPlayer. I'd say things played out perfectly."

Both of Skarren's Grand Prix wins have come in fairly stacked Top 8 brackets. His first Top 8 included Pro Tour Hall of Famer Ben Stark, Patrick Sullivan, and Fabiano, and his most recent featured FIVE players who had previously won a Grand Prix, including another Hall of Famer in William Jensen. Skarren is well aware that many other Magic players could be put off their game by such accomplished brackets.

"One of my greatest strengths as a Magic player is that I am completely tilt-proof when it comes to my game play. No matter what is on the line or who I am playing against, I always have the same mindset: play tight, win the game. When it comes down to it, the trick is to just take it one match at a time," he said, echoing what many great players have said before him. "There will be time to celebrate or reflect on your mistakes at the end of the day; when it is time to play, the only thing that matters is the game at hand."

With Grand Prix Charlotte in his rearview mirror, Skarren felt that he still had something to prove. Despite being the last person standing in a 2700+ person field and defeating another GP Champion in the finals, he knew that a single good finish would get written off by many as mere luck. Winning GP Philadelphia just a few weekends ago gave him an almost indescribable surge of satisfaction.

"Getting the second big finish brings a level of validation no one can argue with," said the GP Philly champion, who had just won a Limited PTQ as well. "Not to mention, this time I got to do it with a huge squad of friends and teammates at my back rooting me on through the whole Top 8. A Top 8, I might add, that involved getting through both Reid Duke and William 'Huey' Jensen. The amount of consistency that those two put up is insane and I have nothing but the utmost respect for them as players and rivals. To be honest, I'd rather play against a Grand Prix champion in the finals. I'm a big supporter of earning your wins and what better way to do it than besting one of the game's best? Not to mention, Gerard Fabiano and I have been good friends ever since we played in the finals of Grand Prix Charlotte. There's something about sharing that moment that just bonds you with someone."

With a PTQ win and a GP win in the current Limited format, who better to turn to for some Prerelease advice as we prepare to introduce Journey into Nyx to the Sealed Deck card pool?

"For me, Prereleases are the perfect place to try out new ideas," said Skarren. "My advice: don't focus solely on winning as many matches as possible. Have some fun and be willing to take a few risks in the name of figuring things out. Want to know if Polymorphous Rush is good in your white-blue heroic deck? Only one way to find out."

Two common cards in the new set that stand out for Skarren are Feast of Dreams and Sigiled Starfish.

"Theros has been defined by how abysmal its removal is, and gaining a cost-efficient, instant-speed, hard-removal spell is nothing to scoff at—even if it is a bit narrow," said Skarren. "As for Sigiled Starfish, have you read that card!? You get to scry every turn, for free, and it only costs two mana! It even has decent stats and lacks the word "Defender." In my book, the Scryfish can do no wrong."

Part of being successful in Limited is knowing what combat tricks to play around and Skarren wanted players to keep one word in mind at all times when wondering what their opponents might have waiting in the wings—strive.

"It's hard to say without getting any games in, but at first glance you've got to like how the Heroic decks are looking. Not only did we pick up multiple heroic creatures at common, but they come hand in hand with common strive spells to give them a boost," advised the two-time Limited GP winner. "This set brings a new mechanic to the table that is all about combat tricks that get better the longer the game goes on. Be prepared to face down everything from a blowout Ajani's Presence to a game-winning Aerial Formation. Keep in mind it is going to be a lot easier to trigger multiple heroic creatures at once with this new mechanic, as well."

I don't know about you, but talking to Skarren left me excited to get my hands on the new cards and start practicing for the remaining Sealed PTQs this season.