have mentioned in previous columns how much I regretted having to pass on an opportunity to do coverage of Grand Prix Boston. There was the Extended format feeling the initial churns from the paddle that is the Top 8 decklist page, the first wave of Japanese players to tackle an American Grand Prix, and the development of the stubborn Temporary Solution deck to write about.

More than anything though, and lost amid all the other stories, was the success of Dan O'Mahoney-Schwartz. Dan, who had been largely inactive for several years, is one of the game's founding professionals. When I first opened the doors to Neutral Ground (rapidly approaching 10 years ago) Daniel and his brother Steve were literally the first customers to walk through the door.

Dan and Steve joined forces with Jon Finkel to form Antarctica, one of the more successful three-person teams. They finished third at the first Pro Tour, reached the finals of the ESPN team championships against Black Ops, and won Grand Prix-St Louis. They also reached the Top 4 of at least two other team Grand Prix. Daniel also reached the Top 4 along with William Jensen and David Williams as part of the Tightans at Grand Prix-Cannes.

Dan also finished second and fourth at two individual GPs before retiring. While he was a very successful player in his own right, he never saw Sunday action at a Pro Tour as an individual and was often overlooked in the shadow of his more successful brother Steve.

“The highlight of my career was when my brother beat Jon (Finkel) in the finals on the Queen Mary (PT LA ‘98-99)," joked Dan.

Although Dan and Steve did pop up last year along with Joe “Mouth" Kambourakis to try their hand at a Team GP in Washington, the real world has taken precedence over Magic for Dan. “I have been working as an editor for an educational publishing company since graduating from college. I live in Allston, Massachusetts with my brother and two friends."

Dan had not been seen again until he resurfaced at the Grand Prix in Boston. “I live five minutes away in Allston. I figured if I once could fly all over the world to get to Magic tournaments, I could still drive around the block to get to one."

Team Antarctica from Grand Prix-St. Louis.This was not the start of a full-time return to the game, rather “a dipping of the toes" back into the proverbial shark-infested waters. It certainly supports the claim that nobody ever truly quits the game once it in their blood. In fact, Dan was surprised to find that Magic was a powerful force in his life even when he thought the Top 8 bracket was a thing of his past.

“The skills I used preparing for competitive Magic tournaments have helped me tremendously in my older age," he commented. “When I quit playing and decided I had to move on, I thought playing Magic was just a time-consuming hobby that nobody else would appreciate. I slowly started to realize that all of the organization and strategy involved in competitive Magic comes in handy in the real world."

In Boston, he played blue-green Madness and Dan approached his deck choice with that same level of strategy an organization. “It was an easy choice -- only playable Extended deck I had the cards for. I bought the Chrome Moxes online a week before the Grand Prix, and I had the rest from two years ago. I hadn't played with real cards in about two years."

Dan was just looking for a nostalgic good time when he went to the event and had no real expectations of reaching the Top 8 out of a 699-person field, much less qualifying for the Pro Tour one more time. “I had one bye, had never played the format, and there were hundreds of people there. Even back in the day with two or three byes and that many people, I wouldn't have been that confident."

With the Pro Tour conveniently located on the East Coast, coupled with the new payout structure for Pro Tour-Philadelphia, the decision to attend next Pro Tour was a no-brainer for Dan.

“I like the new payout a lot," he said. “I find the decision to travel to a Magic tournament easier to make knowing that a competent showing will break me even."

Last week I wrote about Jeroen Remie and the massive TOGIT and Dutch supersquad that was forming to tackle the Kamigawa Block Constructed format. Dan is on the opposite end of the spectrum. With a couple of years between him and the last time he seriously approached a format, his support system has atrophied and he finds himself without any qualified players in his immediate circle of friends.

“I have played two games and read Zvi's articles. That is about all I did for Boston, so hopefully it will work again," joked Dan with a Rodney Dangerfieldesque tug on his shirt collar. “Actually, Osyp's articles on Extended helped me the most for GP Boston. The one worldly tutor worked out very nicely, even though everyone just decided it sucked. Kids should not try this at home. 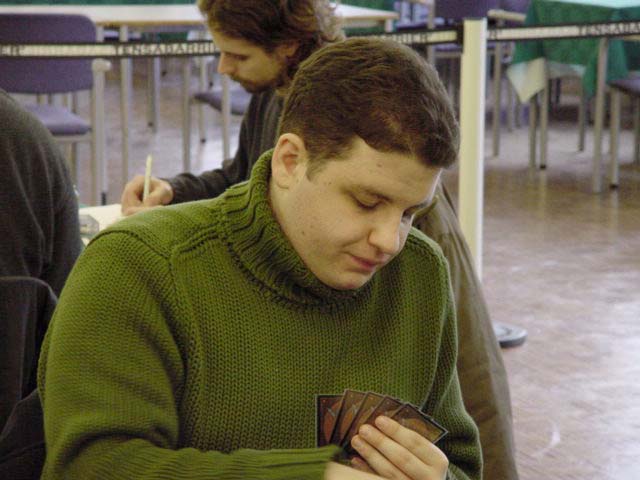 Daniel OMS back in his college days (GP-Amsterdam '01).“I have peeked at the premier events on Magic Online, but they seem pretty random. I don't think the powerful decks will be hard to figure out. I know that I can't test enough to master some incredible secret deck anyway. I am sure there will be a simple deck I can figure out that I can play and won't screw up."

It is a very different experience for Dan compared to back in his heyday, but some things -- like playtest partners -- will always remain the same.

“I used to prepare for tournaments with a decent amount of testing and plenty of Internet chatting. Daydreaming decks in class made up a lot of my prep time, as well. I don't really play Magic anymore, but I'll play a little with my brother every now and then. I am proxying up the decks so we can test the format. I think that can get me a pretty good deck."

Dan is still hoping to find something that has eluded him throughout his Magic career. “I would like to win, since I never have before."

Now that Magic is on the back burner in his life (or perhaps “on the warming drawer" is the more apt cooking metaphor -- come to think of it, wrapped it in foil and stuck the leftovers in the freezer), Dan feels he is better equipped for success than when he was playing the game every day.

“I think my biggest problem in the past was getting nervous under pressure. Now that I don't stress over winning and just enjoy playing, I take a more sane and logical approach. So it may seem illogical, but I think I play a better game now than I did during my so-called prime." 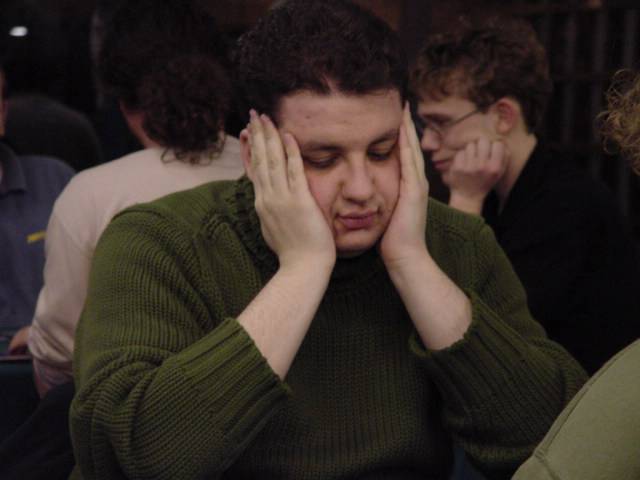 Dan believes he's better equipped to handle the pressure of Magic now.When pressed for an opinion on whether the old school or new school of Magic players fielded a tougher slate of competitors, Dan waffled. “It would be really hard for me to tell. I don't even have second-hand accounts of the new top pros. I think it was tougher to compete in the 1990's. . .there was less information available on the Internet."

While he claimed to not know the top players, he certainly knew what part of the world they hail from these days. “I am sure it would be awesome to see today's Japanese stars suit up against the stars of the past."

I asked Dan what he thought about the idea that almost 10 years after wandering through the doors of Neutral Ground -- and he was already a successful tournament player by the time Neutral Ground opened -- that he would still be playing the game and playing it successfully.

Firestarter: That Was Then, This is Now

Dan OMS claimed it was tougher to prepare for a Pro Tour in the early days when their was less information on the Internet. Do MTGO Premiere events featuring Kamigawa Block Constructed and prominent players such as Zvi Mowshowitz writing articles about how they would approach the Pro Tour make the format easier or more complicated to approach? Does having all that information floating out there for anyone to cull make your decisions easier? Chime in with your opinions by clicking the 'discuss' button on the bottom of the page. Feel free to include any decklist suggestions for Dan to test with Steve in the coming weeks.