am sure that each and every one of you out there has imagined what it would be like to experience playing on Sunday against one of the game's very best players. If you had to face Kenji Tsumura, Gabriel Nassif, Bob Maher, Jon Finkel, or Kai Budde in the first round of action on Sunday, how nervous would you be? 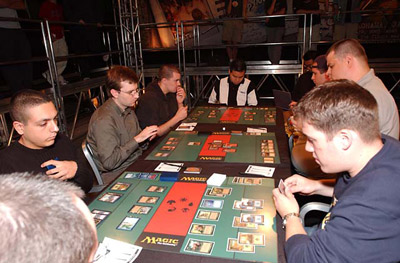 Fabiano took on the mighty Budde in 2002 (recognize the hairline in the bottom left?)

Back in 2002 when Gerard Fabiano was just 18 years old, he was faced with just that scenario at Pro Tour–Boston. Somehow he had to get a good night of sleep on Saturday night knowing that in the morning he would go up against the German Juggernaut/mortal lock for the Hall of Fame Kai Budde.

To be fair, Gerard had been around the block a time or two by that point in his career (having defeated Kai during the Swiss rounds of 2002 Worlds a month earlier). But facing him on Sunday flanked by Marco Blume and Dirk Baberowski? At that point in time that specific trio of Germans – a.k.a. The Phoenix Foundation – had never lost an elimination match on a Sunday.

Gerard was unfazed and relished his moment on stage. He teased Kai Budde about a video interview he had seen with the German in which Kai remarked that his mother had been surprised when Kai went on the Grand Prix winning streak in 1999.

Gerard to Kai: "So, what? Your mother thought you were a stick?"

It was classic Gerard and I was grateful to be covering him at the time. It was one of my first events as a coverage reporter and Gerard is one of the players who make that job easy. He is full of energy and is always good for at least once classic line. He has not just a love for the game but a love for the people he has met playing the game, a trait I always find inspiring when I speak to him.

Gerard is returning to Massachusetts for the Grand Prix this weekend, to play Magic in the state that saw him post his career-best finish. He couldn't help looking back at that zenith without thinking about Eric Ziegler.

Ziegler had been one-third of Slay Pillage Massacre (the rest of which being Scott McCord and Jon Sonne). The trio had a tremendous tournament in New York the year previous but just fell short of a Sunday finish. Three-player teams was always a popular format among the East Coast players and Scott and Jon looked forward to improving their finish at Pro Tour–Boston. Eric could not commit as his wedding overshadowed his ability to play high-level Magic.

The search was on for a new player to fill out their roster:

"Eric and I are real good friends," explained Gerard. "I was in his wedding and he was the one who helped me when I was young, driving to PTQs, etc. He offered me his slot on Slay Pillage Massacre when he decided to take a break from Magic. Scott and Jon didn't want me but Eric told them we would do well and I didn't let down Scott, Jon, or Eric. I was proud. 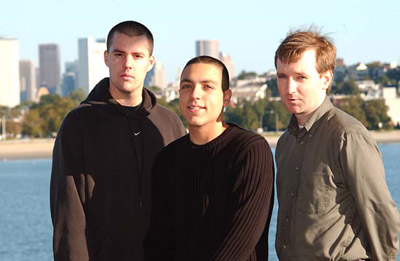 "2002 was my first real success at Magic. I was only 18 years old and didn't know much, but we managed to make Top 4. I was real happy and it is one of my best memories in Magic."

While Ziegler does not play Magic often these days, he does make time to team with Gerard for Two-Headed Giant and the duo are repeat New Jersey state champions in the format. For a brief time Gerard was the highest rated Two-Headed Giant player in all the land but that was before the results from Amsterdam hit the database. Having played the format from last year to this one, I went to Gerard to get his take on the change from 40 to 30 starting life.

"It has a lot of impact... you want to have a great curve and with lower life," Gerard explained. To confirm his opinion, there were even sightings of Benalish Cavalry in Amsterdam – something that just seemed improbable at 40 life.

"Each decision becomes more valuable so if you mess up once that could be the difference in the game," he continued. "You have to make sure you choose your mulligan wisely and deck building becomes more important. I like to play 18 lands in a deck even without card drawing because you don't want to mulligan to six." 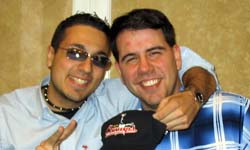 As a veteran of many a team format Gerard knows that winning with teammates is not just about what happens in the red zone. "TRUST, don't argue during the match," was Gerard's advice. "It gives away lots of information; if you don't trust your teammate find a new one."

If you have ever followed Gerard in the coverage at any major event, you are probably aware that he has always aspired to have a career in acting or filmmaking. He finally took a step in the right direction by appearing in a series of videos for an online content provider he works for, www.illumistream.com.

"I always try out for reality shows and I plan on trying to make it big in Hollywood once I get enough money to make the trip out there," Gerard set up to explain about his medical video foray. "Matt Wang, a fellow N.Y. magic player and good friend, hooked me up with a job at Fullturn Media, where they make online web content. I do accounting work mostly for them, but every once in a while I'll get something fun like this to do."

Gerard recommends watching "Schizophrenia #2: Diagnosing and Treating Schizophrenia" to see his finest work. I asked Gerard how acting stacks up versus accounting and playing Magic.

"Magic is the best," he stated, but in typical Gerard fashion he took the rest of his answer in a somewhat unexpected direction. "But rap battling and basketball are also up there. At the GP we plan on running both on Sunday so if you want to play ball or rap battle let me know at the Grand Prix. I think doing non-Magic things at Magic tournaments after the tournament is over often leads to a lot of fun."

Locations for many City Champs finals have been announced and the first wave of prizes have been set for the Beta season. It is important to note that this is not the final list of prizes -- the prize chart will be updated until the end of the season based on each city's participation. The big winner attendance-wise so far is Denver, Colorado with a whopping 710 player entries taking part in the season's tournaments as of the last week of March. As a result of that turnout, players in that city's finals will be fighting for at least an invite to U.S. Nationals for the winner, two byes at Regionals for the runner-up, and a bye apiece for the third- and fourth-place finishers.

So far, Chicago is the only other city to generate as deep a pool of byes and invites, with most other cities only offering byes down to third place. Lucky Canadians in Vancouver – with their lower attendance thresholds – will be fighting for two invites to Nationals.

Gerard Fabiano is encouraging players to seek him out after Grand Prix–Massachusetts to play some basketball and rap battle – his preferred post-tournament activities. What do you do after a tournament to unwind? Head over to the forums and share – rapping not required.