The Warden School of Taking Care of Business

have been podcasting about Magic with Mike Flores for the better of a decade and throughout that time he has backed me into the corner of defending all the green cards. There was a time when Mike liked green cards. He built a green-white deck that Brian Kibler took to the Top 8 of US Nationals. You probably have not heard about the time he won a PTQ with Gnarled Mass but I can assure that it happened. Yet somehow he has continually pushed himself further and further away from all things green. He won't draft green. Won't build green decks. I don't even think he recycles.

Personally, for as long as I have been playing Magic I have gravitated toward the color and usually can be found wearing a Simic T-shirt underneath my shirt and tie. I like that combination of fatties and deck manipulation that Simic gives you. There is nothing I like more than casting an Impulse to find some burly beast that I can power out ahead of the mana curve. My preview card this week lets me remove blue from the equation—although, let's be honest, I'm going to be playing blue too—and flips the script so that my fattie is digging me through my deck.

Allow me to introduce you to a beast heading straight into my Momir Vig Commander deck. 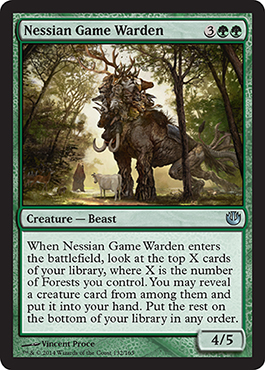 We have already seen Scourge of the Fleet, Squelching Leeches, and Spite of Mogis—all cards that all care similarly about the number of basic lands in play—and this is a fine addition to that rookie roster. I am excited to try this card out in Limited at the upcoming Prereleases for Journey into Nyx and am eager to see how these cards impact deck construction.

I had the pleasure to work alongside Ben Stark commentating at Grand Prix Philadelphia this past weekend. He suggested that you would need to play at least 10 Swamps in your Limited deck to justify playing Squelching Leeches in your starting 40. Since the base stats of the Nessian Game Warden don't rely on the number of Forests you are playing, you won't need to bias as heavily to get value out of it. Assuming you are powering this out on turn four with Voyaging Satyr or Kiora's Follower, the most likely scenario is looking two or three cards deep. Where this card really shines is in the mid to late game when you get to look five or six cards deep for a hard-hitting creature spell.

For Commander this is just going to be a solid tool in a format that often comes down to an attrition war with abundant board sweepers and reset buttons. I love cards like Coiling Oracle, Wall of Blossoms, Elvish Visionary—I even play Jungle Barrier—and while you are not guaranteed to net a card off of the Nessian Game Warden the card selection aspect more than mitigates that risk. This is especially true when you are digging through your deck for an answer card like Acidic Slime, Thrun, the Last Troll, or the always crucial Brooding Saurian.

Obviously this card is going to dig deepest in a mono-green deck but I am just looking for more ways to abuse this and that means we will need to pair it with some other colors to keep our hand stocked with creatures to deploy after yet another reset button has been hit. The key here are the words "enters the battlefield" as opposed to the joy-killing phrase "when you cast."

In Selesnya—and this always veers into Bant for me—there are a number of ways to "blink" Nessian Game Warden once it is in play and get another chance to herd creatures off the top of your deck. The eponymous Momentary Blink—it did not take very long to get to Bant, did it now?—means you can get three cracks at the top of your deck with one Nessian Game Warden. You also get to do it at instant speed, which lets you untap on your turn and start the stampede of creatures.

At sorcery speed you can play Ghostly Flicker—with the added value of also blinking your Indrik Stomphowler or Eternal Witness—and begin to do some more degenerate things. Flickerwisp is also a fine partner for the Game Warden. I fully expect that the first time I see this card in Commander play will be in Rashad Miller's Maelstrom Wanderer deck. His deck is perversely built around finding and abusing Astral Slide to set up Living Death effects. He relies heavily on cycling creatures to rip through his deck and I could see him chaining one cycling creature into the next with Astral Slide blinking Nessian Game Warden in and out of play.

In a Bant deck this card gets really interesting if you can make a token copy and populate it. Of course you can just use play Progenitor Mimic and you won't even need to populate. I say get greedy, though; start copying those Mimic copies and let your deck go off. Who doesn't like a good Rootborn Defenses against all those nasty board sweepers?

Nessian Game Warden is an easy inclusion for me in my Simic decks, which lean more heavily on green mana ramp to get going. I already mentioned Progenitor Mimic and there are no shortage of other clone effects to pair here—Phyrexian Metamorph, Vesuvan Shapeshifter, and Phantasmal Image are all commonly played in Simic decks. We also have blue blink effects to think about...

Deadeye Navigator is one of the most contested cards in Commander these days. It has stayed legal in the format while sniggering at the bannings of Primeval Titan and Sylvan Primordial. I won't lie...I have been guilty of pairing it with something utterly disheartening like a Mystic Snake or Draining Whelk. I certainly must have had a small role in the Primordial banning when I think about how many of Sheldon Menery and Scott Larabee's permanents I have destroyed.

I try my hardest to find fair pairings for the Deadeye Navigator these days lest he go away too soon. (I recently had the pleasure of pairing it with Trinket Mage to scratch my way back into a game by blinking it repeatedly in a four mana cycle to recur an Elxiir of Immortality.) I am looking forward to the collaboration of the Game Warden and the Navigator driving through the Simic Wilderness and restocking my hand.

Can we also stop for a moment and think about paying the kicker on Rite of Replication targeting this card? Should your opponent find a way to deal with that army of fatties, your hand will be chock full of all the best creatures that were lurking in the remainder of your deck.

Abusing the Game Warden is not limited to the Bant wedge of the color pie by any stretch of the imagination. While this is not going to be your primary reanimation target in a black deck, that does not preclude you from zombifying this back into play any number of ways. Rescue from the Underworld and Whip of Erabos are Standard- and Block-legal ways to bring this back from beyond—and we know that Golgari is good at filling its yard with targets and Nessian Game Warden provides a way to keep the momentum for your deck moving forward if you play enough Forests. 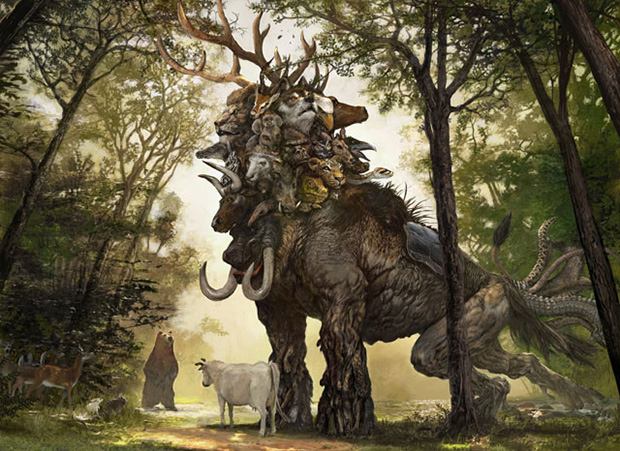 In Gruul this might not be the biggest monster in the menagerie but it does keep your deck humming along. Think about this card in a Xenagos, God of Revels, deck where you get to bash in with an 8 power hasty Game Warden and find your play for the next turn in the process.

My preview card from Born of the Gods leaps to mind as a card to pair with this one. Fellhide Spiritbinder copying the Game Warden seems like a bargain. I like any repeatable effect that copies Nessian Game Warden, but I'm happy to take care of business with something as simple as a Heat Shimmer.

This is going to be a fun card to abuse in Commander and I am eager to see if it can crack the ranks of Block and Standard. But before any of that happens it's going to be providing plenty of value in Sealed Decks during the Prerelease. I know I'm hoping I get to play with it. What cards are you looking forward to opening? Let me know on Twitter (@Top8Games).