Wizards of the Coast is out of the office for the Thanksgiving holiday, and will return with new articles beginning Monday, November 28. In case you missed it, what follows is the article that ran in this slot last week. Have a great weekend, and we’ll see you Monday!

you look to the right, you'll see the updated Player of the Year standings after the triple-Grand Prix weekend earlier this month. Barring any Bilbao/Beijing-fueled surges, the race going into Worlds is very much between three players – the three players at the core of any argument about who the very best in the world is today.

Looking through the top 21 players, you can see that Japan maintains its stranglehold on professional Magic. Ten of the top 21 hail from Japan, and that nation makes up 60 percent of the top 10. Leading the pack is Kenji Tsumura, the latest superstar from Japan. 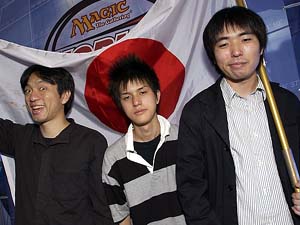 Fujita, Tsumura and Nakamura are three of the top six in this year's Player of the Year race.

Kenji first popped up as a member of the Japanese National team (with Tsuyoshi Fujita and Shuuhei Nakamura) that finished third last year in San Francisco. Since then, Kenji has played on Sunday THREE times – in Philadelphia, Atlanta, and Los Angeles. When you consider that Tsumura's countryman Masashi Oiso has played on Sunday five times in his career – and is considered among the very best to ever play the game – you can see why Tsumura was dubbed the best player in the game by his Philadelphia semifinal opponent Olivier Ruel back in May.

While the Japanese continue to dominate the Player of the Year leaderboard, it has seemed like "all France, all the time" when it comes to winning Pro Tours. Pierre Canali, Gabriel Nassif, and Antoine Ruel have all hoisted trophies this season. If you want to expand to include French speakers, you also get David Rood and Geoffrey Siron. Despite not winning a Pro Tour this season, Olivier Ruel is the most successful player in the world after Kenji – and neither has been crowned a Pro Tour champion this year. 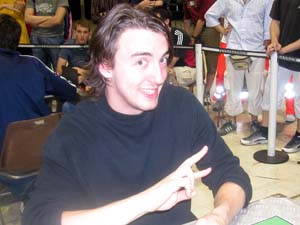 Ruel's Road Warrior ways have helped him in this year's race.Olivier is the man chasing Kenji and could benefit from one last Grand Prix in Europe before Worlds this very weekend. Grand Prix tournaments have been Olivier's bread and butter in this year's race. He has made the Top 8 of two Pro Tours, but before Los Angeles had not finished in the money in his non-Top 8 events. Olivier has racked up Grand Prix wins in Helsinki and Bologna, with a Top 8 in Copenhagen as well. Those three events make up more than a fifth of his total points. The six potential points from Bilbao could push Olivier back into the lead he held right through the Los Angeles weekend. Of course, that assumes the Japanese are not heading to Bilbao themselves…

Masashi Oiso has been making up for lost time all season and I would not be at all surprised to see him show up in Europe this weekend. Due to school commitments Oiso bailed out on going to Pro Tour-Philadelphia – something he immediately regretted upon hearing about the Players Club. Despite being one full Pro Tour down from everyone else on the list, Oiso is only chasing two players in the standings and has locked up Level 6 benefits for Worlds and all of next season.

While Oiso is eight points off the lead, he is the only player near the Top of the standings who is also a member of his National team. Finishing in the Top 16 of the team competition can represent anywhere from one and six additional points. This race is close enough that a handful of points could easily be the margin of victory.

The Rookie of the Year race has been all but locked up by Pierre Canali since Sunday evening in Columbus way back at the start of the season. However, the lead could be overtaken if someone else near the top of the list posts a victory in Yokohama. It is interesting to look in the country column in the rookie race – the word Japan does not appear until well down the page. The United States, on the other hand, appears more than any other country in the Top 20 – just a hair under half. It will be interesting to see if the Americans can graduate from the rookie ranks to the Player of the Year lists in the 2006 season.

One player who has made the transition from the Rookie of the Year race to the Top 20 in this year's Player of the Year lists is Julien Nuijten. Julien ambushed the field last year with his win at Worlds at the tender age of 15. Between the victory, his finish in the Player of the Year race, and his part on the Dutch National team, Julien took home more than $50,000 for his San Francisco weekend.

Nuijten towered over the Magic community at 2004 Worlds.Julien's 2005 Pro Tour results have not been stunning – he has one solid finish in Atlanta and a Top 32 in Columbus – but he has racked up two Grand Prix wins. Additionally he has become a respected columnist and done some mighty fine Top 8 coverage at the European Grand Prix events he has not managed to win. Julien is currently one of the Top 20 players in the world, has cashed in more money at one event than any player in Magic history, has traveled around the world, and also agreed to sit down with me for Five Questions.

BDM: It's been more than a year since you won the World Championships. Would you say this has been a successful season for you?

Julien: It depends on what you're talking about exactly. I've been to a lot of places all around the globe and I've had success at the Grand Prix but I'm not too happy about my Pro Tour finishes. Apart from a Top 32 in Columbus and 6th at the team GP I never finished in the money (Top 64). Other than that, I'm happy about the season.

BDM: You have certainly seen a lot of the world in this past year – everywhere from Moscow to Japan to lovely Columbus, Ohio. What has been the highlight of your year?

Julien: As for the environment, I liked the events in California the most. As for the events themselves, I'd have to say Moscow. I know that it wasn't really a tournament, but the entire weekend with so many great players and people, topped off by an amazing dinner on the last night, was my best experience at a Magic event thus far. Even Masashi thought it was great and he didn't have a fluent conversation throughout the weekend. I also liked the time I spent in Indianapolis with Gabe Walls and in New Jersey with Gerard Fabiano. They showed me another way of life – the American way.

BDM: At the beginning of the season, Magic was all about the Dutch, French, and Japanese. The Dutch seem to be falling off the pace set by the other two countries this year. I mean...even America has put more players into Top 8s this season. Can we expect big things from the Dutchies at Worlds?

Julien: I agree that this season didn't put the Dutch in the spotlight as often as previous seasons, but if you look at the number of Dutch that are on the gravy train now compared to a few years ago, you'll see that it increased heavily. We tend to have difficulties with new formats though, as we don't really have a good deckbuilder. We need a Japanese player on our team. 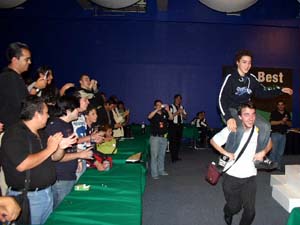 Winning a Grand Prix gets you a ride on the Ruel Express.BDM: What Pro Club level have you locked in for next year? What are you hoping for personally at Worlds in terms of the Players Club? How has the Players Club worked out for you so far?

Julien: I'm a lock for Level 4 next year, and I need 8 extra points to level up again. That's also what I'm aiming for now; when they first introduced the Players Club I hoped to get to Level 4 at least. Now I'm hoping to get to Level 5, but to do that I have to start doing well at Pro Tours rather than GPs. PTs just give you way more points than Grand Prix.

Julien: I've always been the younger one of the group in school, so I'm used to that. I'm also currently in the final year of high school, after that I can go to university, and that's what most Dutch Magic players are in right now, so I'm not that much different from them. As I said, my classmates are also usually 1-2 years older than I am, and have been for the last 7 years or so, so it's not that big of a change. 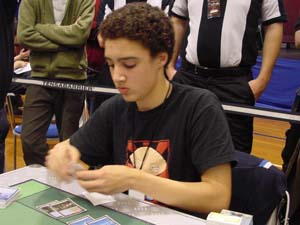 Nuijten captured his second GP crown at Copenhagen.BDM: I know it's supposed to be just five questions, but I have to ask. What beats Tog in Extended? Seriously, I have a PTQ coming up in two weekends. I never get to play and I don't want to blow my shot. Should I play Tog or is there something else I should be playtesting?

Julien: If you like Affinity, it's good against Tog, but it's always a big risk because of Kataki. Basically, it's a very risky deck on Day One and a good deck on Day Two, as Boros decks will have trouble with the flood of Psychatog decks. Apart from Affinity, I don't think there is a deck that has a matchup better than 50 percent against Psychatog but it always depends on the builds you're playing with and against.

Firestarter: Is American Magic on the upswing?

Almost half of the Top 20 players on the Rookie list are from the U.S.. Can Billy Moreno, Chris McDaniel, Jeff Novekoff, Don Smith, and the like continue their winning ways in Japan and beyond? Click Discuss to share your opinions on the future of American Magic.