can't be certain, but as Grand Prix Lincoln wound down to its exciting conclusion last weekend I think I saw Brian Kibler checking travel websites for deals on flights to Baltimore. With his win at Pro Tour Dark Ascension just two weekends ago, Kibler had surged into a commanding lead for the title of US National Champion and the captaincy of the American team at this summer's World Magic Cup. He was more than 10 Pro Points ahead of his nearest challengers—all ChannelFireball teammates—Josh Utter-Leyton, Luis Scott-Vargas, and David Ochoa, but with LSV's semifinal showing in Lincoln that lead was cut to a mere 8 points.

With Pro Tour Dark Ascension now in the books, you can understand why players around the world—from top pros to FNMers dreaming about playing on the international stage—have the World Magic Cup on their minds.

Becoming a National Champion has always been a great honor, but this year it will indicate you are the top professional player from your country for the previous year. It also means that, if your team wins the World Magic Cup, you will have triumphed over the best player each Magic nation has to offer. While there have been some very impressive National Champions over the years, we will never have seen such a concentration of Pro Tour veterans leading their national teams. May 13—the Sunday of Pro Tour Avacyn Restored—is going to be a huge day as all seventy-two National Champions will be determined, and yes, Wizards of the Coast will officially recognize the top pro as the National Champion. With so many Grand Prix and the Pro-Point bonanza that is Pro Tour Avacyn Restored ahead of us, there can be plenty of turnover between now and the time rosters are set. If you were to determine rosters now, the first spot for each team has the makings of an amazing team event. 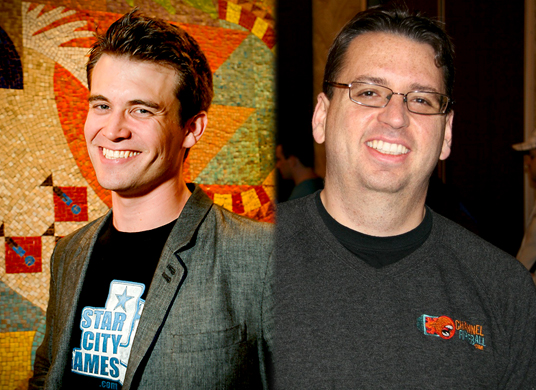 Kibler would lead the American squad as detailed above. Paulo Vitor Damo da Rosa is more or less guaranteed the title of Brazilian National Champion, barring a Yuuya Watanabe-like tear through the remaining GPs by Willy Edel, who is more than 30 points back in the standings. Speaking of Watanabe, he is 9 points ahead of his nearest competitor, Shuhei Nakamura, and 11 points out in front of Shouta Yasooka. Continuing down the standings, you see Pro Tour Champion Samuele Estratti of Italy, Worlds Finalist Richard Bland of Great Britain, two-time Top 8 competitor Martin Juza of the Czech Republic, and Pro Tour Hall of Famer Raphael Levy of France leading their respective countries.

Just that small sampling of potential National Champions would be the most impressive array of talent we have ever seen at an international team competition for Magic. Who would not want to be a part of that excitement, fighting alongside the likes of Kibler, Damo da Rosa, and Watanabe to become the first team to win the newly created World Magic Cup? Well, your chance is almost here. Starting on April 14 and running through July 1, invited players in each of seventy-two countries will have three World Magic Cup Qualifier tournaments—run across three separate weekends—to finalize the remaining spots on each team. 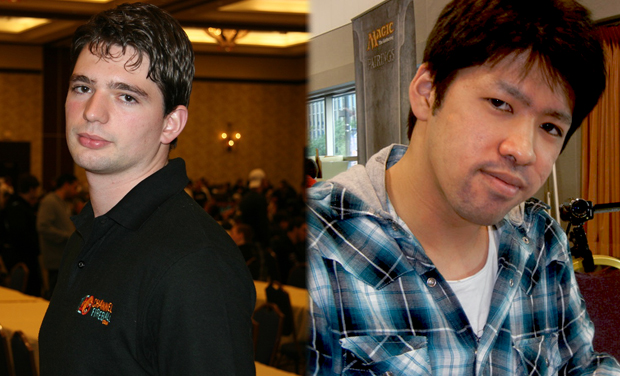 To earn an invitation to a World Magic Cup Qualifier, a player must reach the minimum threshold in 2012 Seasonal Award Points Season #1 for Planeswalker Points. You can find the country-by-country breakdown of those thresholds here. Players who have a 2012 Pro Tour Players Club of level 2 or higher, are Silver, Gold, or Platinum in the 2012–13 Pro Tour Players Club, or members of the Pro Tour Hall of Fame also earn invitations.

According to Organized Play Program Manager Scott Larabee, Wizards expects even more players will get a chance to fight for a spot on their National team than previous National Championships.

"Given that there are three World Magic Cup Qualifiers, we generally set the points level for each country to allow more players to be qualified," explained Larabee, who wants to remind people there is still time to get your Planeswalker Points totals up to the required levels to be eligible to play in qualifiers. "We set up the World Magic Cup Qualifiers invitation system to encourage in-store play." 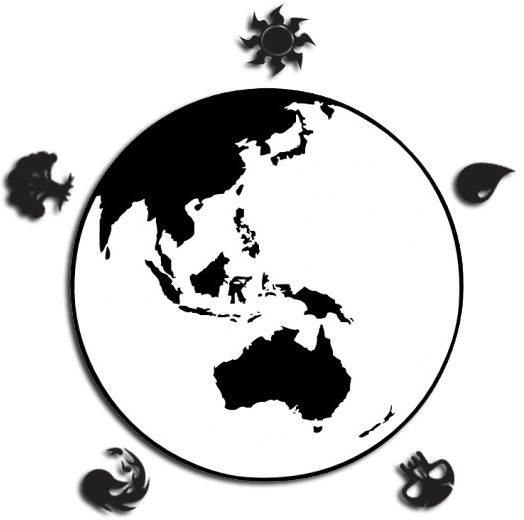 Not only is the quality of the National teams going to be amped up, but the prizes for this team competition are more significant than we have seen at previous team competitions. The winning team will earn a whopping total of $40,000, as well as invitations and airfare to the next Pro Tour and 8 Pro Points for each team member. Invitations and airfare extend all the way through the Top 4 teams and cash prizes go all the way down to the 16th-place team, which will earn $1,000 per member. With everyone's airfare to the event paid for, the cash prizes look even better.

The World Magic Cup should be an amazing showcase for the nations of Magic, with the sole focus on representing your country. There have been some great displays of national pride in past tournaments, and Larabee envisions teams taking this to a new level at Gen Con.

"There were always instances of people cheering when their country was called out," said Larabee of past World Championships opening ceremonies. "We hope to see this throughout the event. I remember the World Championships back in the late '90s. Many teams would show up in 'team uniforms.' The Canadian Team, in particular, had hockey jerseys made that the team wore. Those jerseys were handed down from team to team for a few years. I believe a Japanese team one year showed up in traditional outfits. We still get some of that, but we want to see more." 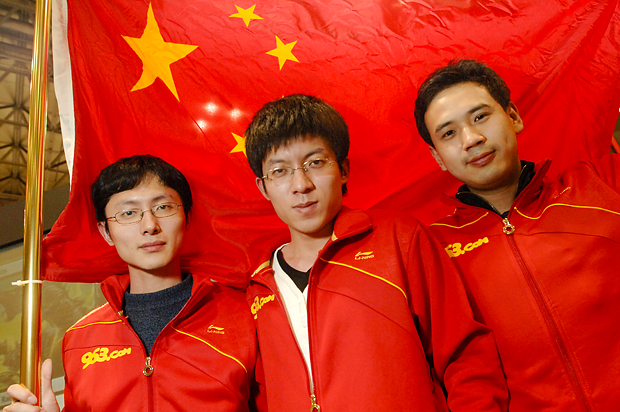 Team China defended their World Team title at the 2010 World Championships in style.

The national pride will be on full display to not only the attendees of Gen Con but to anyone who wants to tune in over the weekend, as the event will be getting the same expanded video, text, and social media coverage you saw at Pro Tour Dark Ascension and will see for Pro Tour Avacyn Restored. "We want this to be an awesome online spectacle. With seventy-two countries represented, everyone will have someone to root for," Larabee said.

With National Champions destined to clash against each other throughout the team rounds, there will be no shortage of marquee matchups to cover live. I know I cannot wait to have the best seat in the house to watch the event and bring you all the action as it happens.

So now that you know how to get there, what about the actual World Magic Cup event? Based on the information Wizards of the Coast released today, it will be unlike any other Magic tournament. You can see the full details here.

Day one of the World Magic Cup will see the teams battle in individual play across four rounds of Standard and three rounds of Booster Draft (players from the same team cannot be paired and will not be in the same draft pod). At the end of the seven rounds, the top thirty-two teams with the highest combined score of their three team members with the highest point totals will advance to day two and the team rounds. While it is not ideal to cut a player from teams advancing, Larabee noted that it was a necessary buffer to make sure that each country can field a three-person team at the start of the event.

"We wanted to have three qualifier events per country, plus the Pro slot," Larabee said about the decision to have four-player teams. "Two qualifiers just didn't seem right. We also wanted to ensure that if teams were a player short—if only three team members show up, or one player gets delayed—the team would still be able to compete."

The fourth player will still earn the same share of the prizes as his or her teammates and can stay with the team and communicate with the others throughout the remainder of the event, encouraging an atmosphere of team spirit.

It also means three times the excitement of World Magic Cup Qualifiers in each country, as those events will feature public events and everything else you would expect from the previous Nationals in larger markets.

On day two, the Top 32 teams will compete in seeded pools of four teams in Team Sealed Deck for three rounds and then three rounds of Team Constructed (Block, Standard, and Modern), with one player playing each format. After three rounds, the top two teams from each pod will advance in the tournament with reseeded pods of four teams. After three more rounds of Constructed, the top two teams from those pods will advance to play on Sunday in the Top 8. 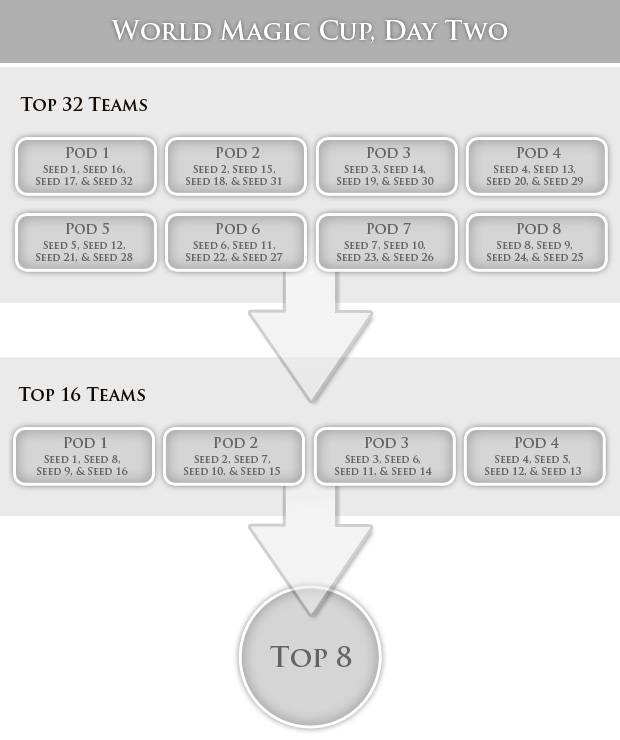 Because the team rounds are seeded rather than run with straight Swiss matchups, that means getting off to a strong start during day one's individual rounds will reward you throughout the tournament. Larabee said that information about how tie-breaks work in each pool will be announced as we get closer to the event in August.

On Sunday—under the bright lights of the cameras—the Top 8 teams will compete in a single-elimination bracket to determine the first winner of the World Magic Cup. I know I can't wait to see which team that is, but I also know I'll be tuning in each week to the Grand Prix coverage to follow the jockeying for position as the title of National Champion stays up for grabs week after week, right up until that final weekend of the season at Pro Tour Avacyn Restored. We'll also be seeing the other seats being filled by winners of the World Magic Cup qualifiers starting in early April. If you have ever dreamt about playing alongside—and against—the likes of Brian Kibler, Yuuya Watanabe, Paulo Vitor Damo da Rosa, Samuele Estratti, and the best players each of the other sixty-eight countries have to offer, you had better get out there and make sure your Planeswalker Points are up the minimum levels to be eligible to compete.

Who knows? Maybe you will find yourself under the bright lights of the Sunday Stage at Gen Con.