s I type this I can hear the distinctive sounds of hundreds of Magic players compulsively shuffling the cards in their hands as the early rounds of the 2011 World Championships are underway. I cannot bring you the sounds of Worlds in my column, but I can certainly bring you the sights courtesy of Pro Tour photographer extraordinaire Craig Gibson. 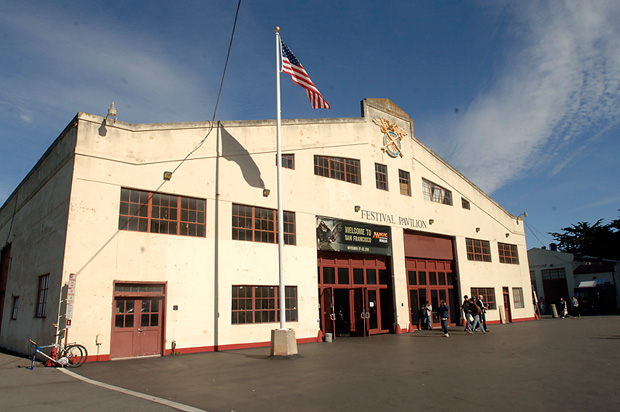 Worlds has returned to the same tournament venue it occupied the last time the event was held in San Francisco, back in 2004. Once again it is at the Fort Mason Center not far from Fisherman's Wharf. The seals have been a little camera shy this morning but they are definitely out there. 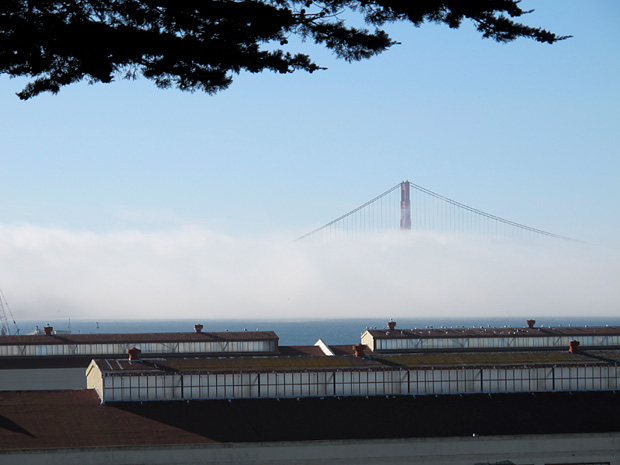 ...as is the legendary San Francisco fog that is obscuring/enhancing the view of the Golden Gate bridge that is sporadically in the background. 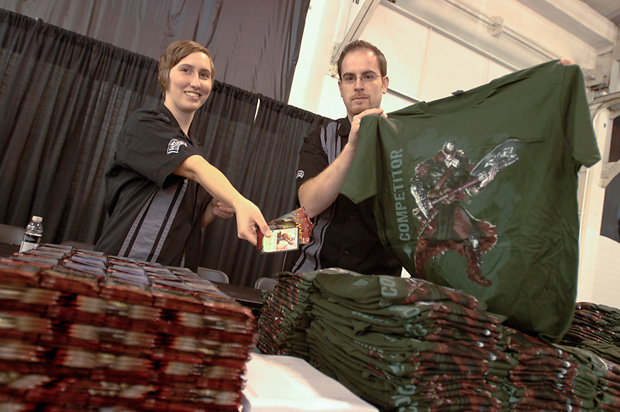 As players made their way through registration last night—and this morning for the lollygaggers—they were given a commemorative T-shirt, a draft set, and an alternate-art Ajani Goldmane. 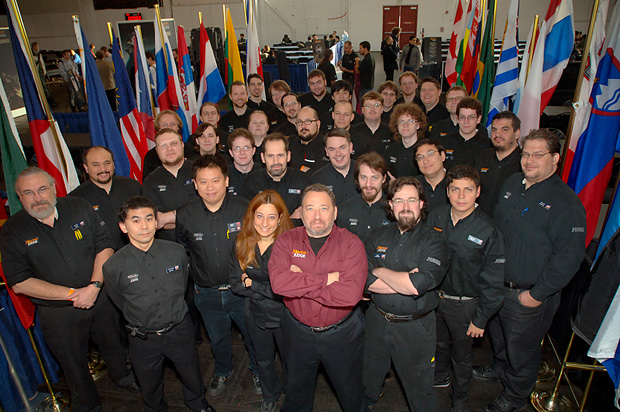 Making sure everyone plays by the rules are head Judge Sheldon Menery and his team of judges for this event. I know I wouldn't want to make him angry—would you? 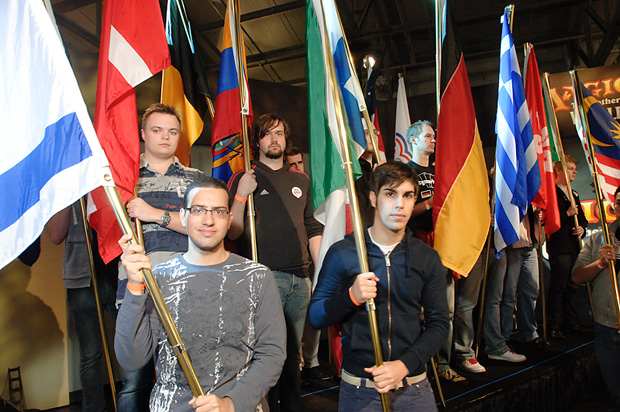 The festivities kicked off this morning with the opening ceremonies, which included the National Champions carrying their respective flags on stage. 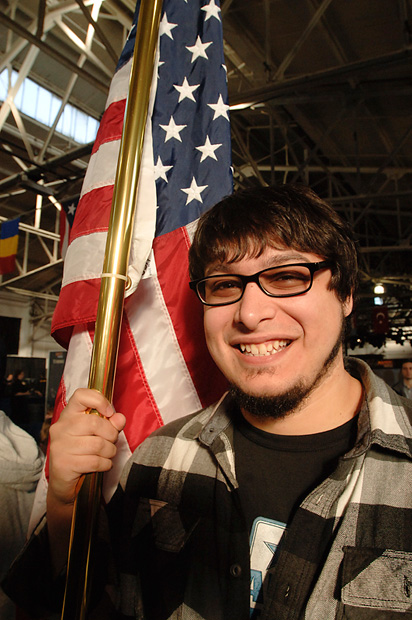 The countries are presented in alphabetical order, with the lone exception being the representative of the hosting country, who is always saved for last. Ali Aintrazi, the US National Champion, waved the home flag enthusiastically. 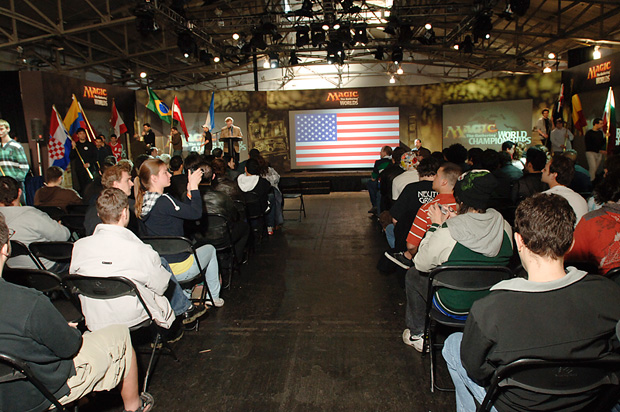 As the Champions left the stage emcee Rich Hagon moved the ceremony forward to the induction of three of the game's greatest players. 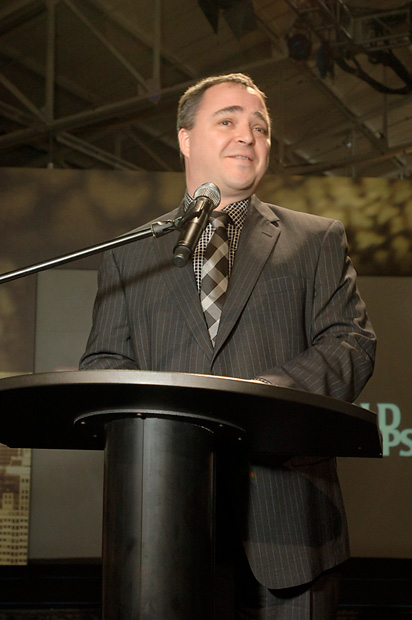 As the Pro Tour Historian I introduced the inductees with a short retrospective on each of their careers. This ceremony was extra special for me since I have known Steven O'Mahoney-Schwartz for longer than the Pro Tour has existed. 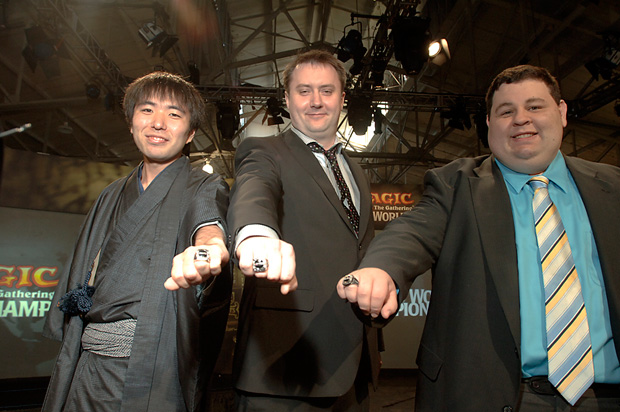 Of course, the other two guys who got inducted are not too shabby either. Shuhei Nakamura (left) is in the running for Player of the Year this weekend, and Anton Jonsson (middle) has five Pro Tour Top 8s on his resume. 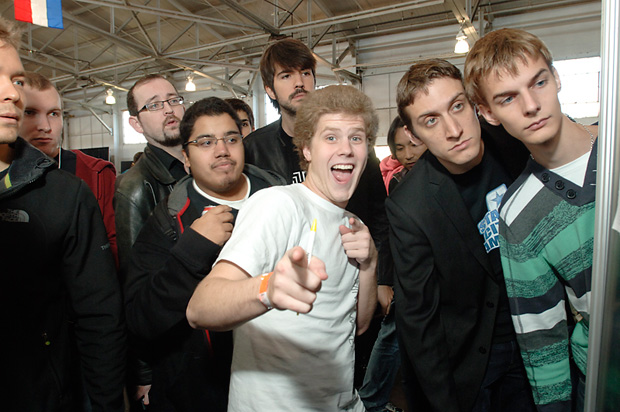 With the flags put away and the Hall of Famers enshrined, it was time to get down to playing some Magic. While Patrick Chapin and others look for where they will be playing Round 1, Corey Baumeister takes care of something truly important—mugging for the cameras. 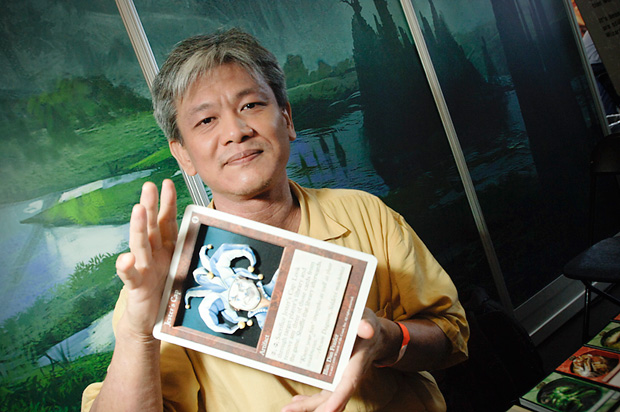 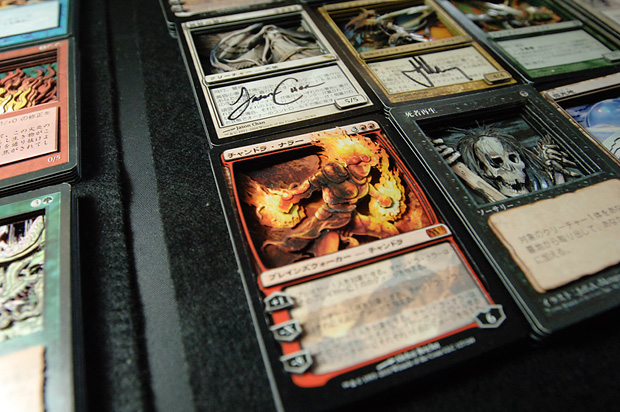 Crowd favorite Ookubo is on hand to show off his three-dimensional card work. Rumor has it that he will be tackling a double-faced card this weekend. I am sure that will be featured in the coverage when and if it happens. 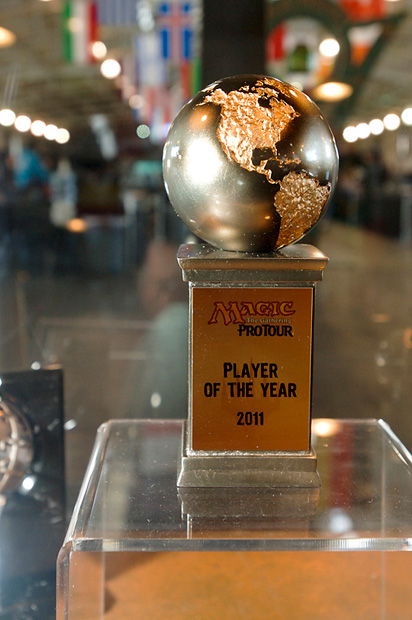 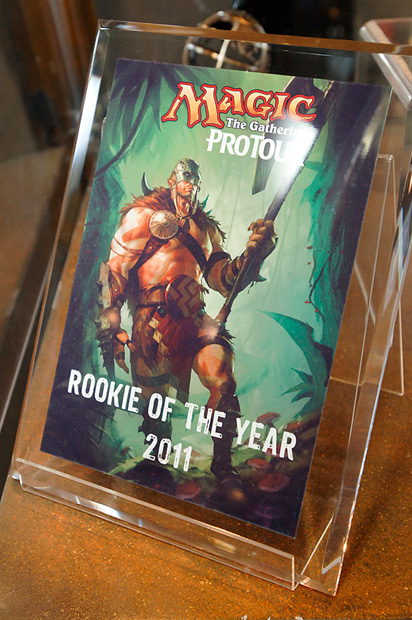 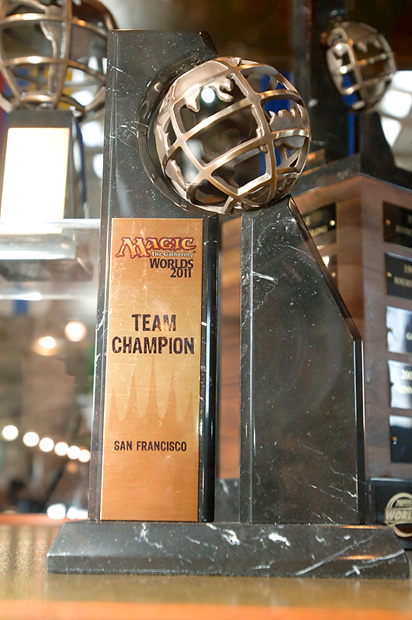 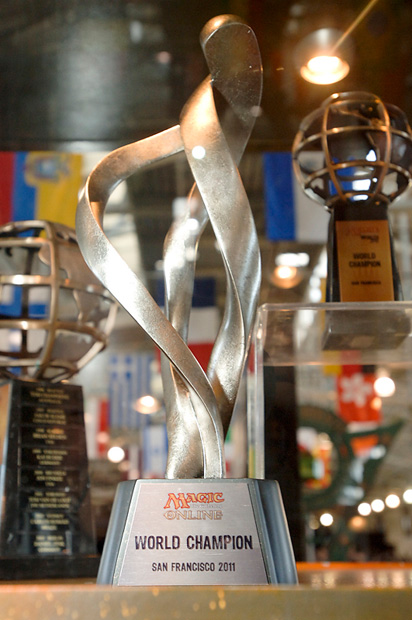 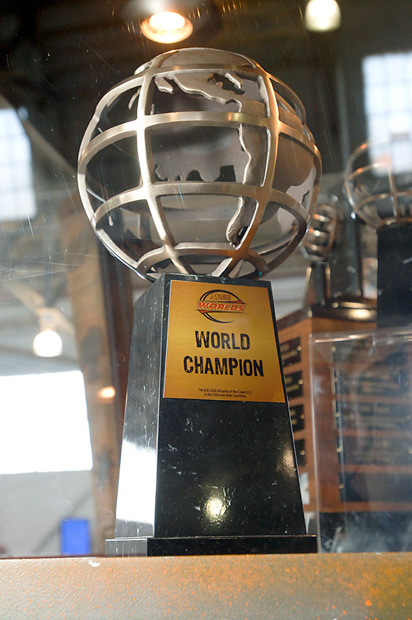 There is a lot of hardware to be given away this weekend with the Player of the Year and Rookie of the Year awards, the individual and team World Champions, and the Magic Online Championship winner all waiting to be crowned. 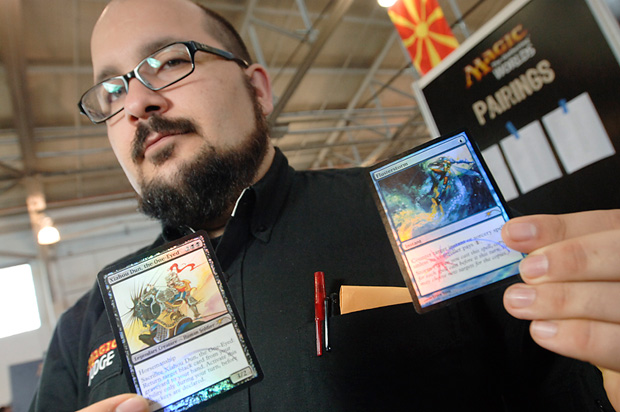 Here we see David de la Iglesia (a level 3 judge from Spain) as a happy judge—trust me, he is very happy—showing off his two latest judge foils. Their hard work at these events does not go unrewarded. 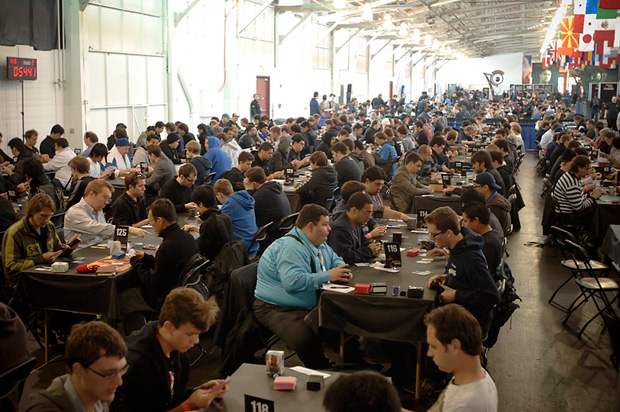 You should be able to tag this picture of the players in action on Facebook. How many faces do you recognize? 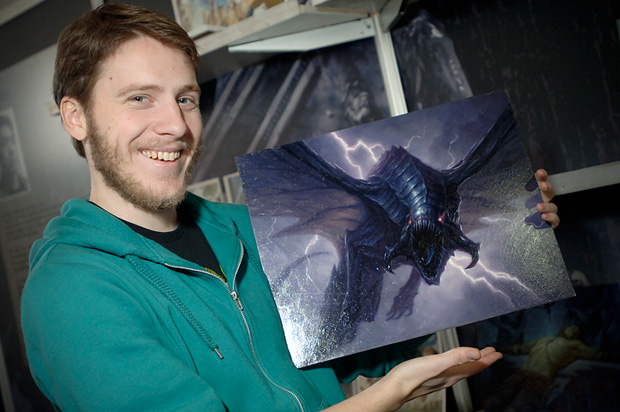 Crosis, the Purger recently got an overhaul by artist Chris Rahn, who was on hand this weekend to show off his latest creation—and perhaps sign a few thousand cards. 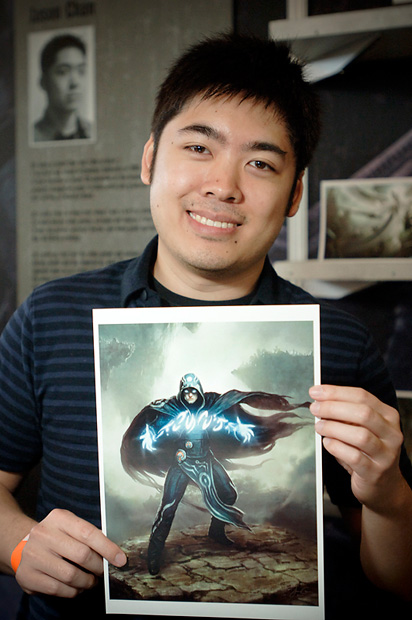 I recently did a story from GP San Diego in which I asked the artists there what card they get asked to sign the most often. I don't need to ask that question of Jason Chan. 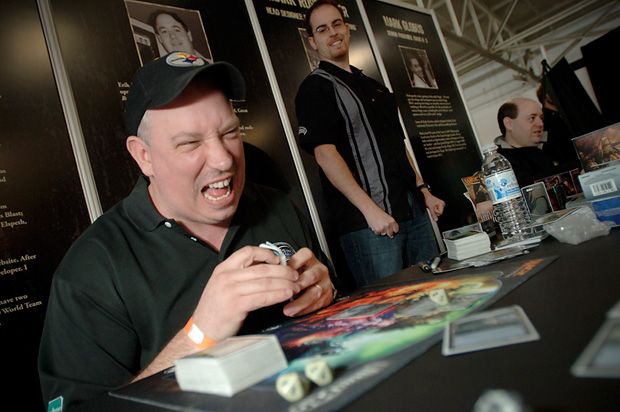 Aaron Forsythe gets his game face on for the spellslinging area... 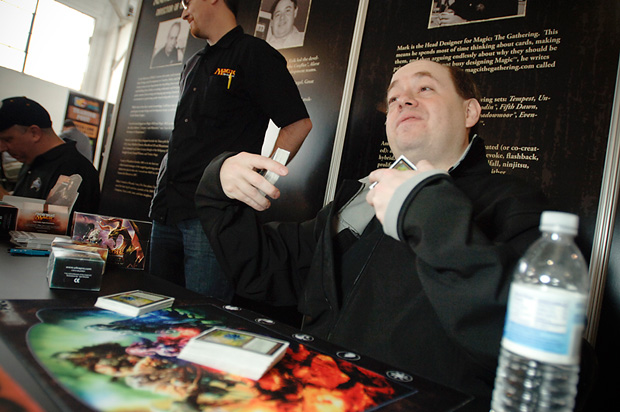 ...while the original Laboratory Maniac, Erik Lauer, explains to his opponent why he has already won before the game even starts.

That's all I have time for right now. There was this really cool deck I just saw in action, and I need to wrangle some players for Deck Techs. Remember to follow all the coverage from DailyMTG.com and don't forget to tune in for the webcast on Sunday.