week in Los Angeles, 16 of the game's best and brightest players gathered to determine the 2005 Magic Invitational. It is Magic: The Gathering's annual all-star game, set against the visually arresting backdrop of E3. But you know all this already, because you have been following the event all week online both here and on Magic Online. 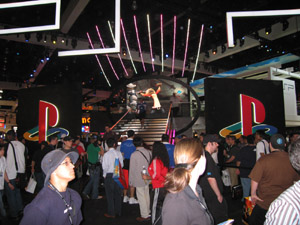 Welcome to E3, please try not to drool. In fact, you know more than I do as I am writing this because by the time this publishes, the field will have been whittled down to two players. Depending on when you are reading this, there may even already be a winner determined.

Not only do I not know who the winner is, but I don't even know how I ended up resolving my Thursday night dilemma. On Thursday all the relevant Invitational players and personnel were given an opportunity to see the new Star Wars movie. Now most of the Wizards staff had already seen it at a special company screening earlier in the week. Scott Larabee, the grand-high muckety-muck of all things tournament-related on MTGO, was originally a Los Angeles-based tournament organizer of the fabled Costa Mesa Women's Club before hiring on at WotC. He has been raving to me about a particular Mexican restaurant for months and months. The plan was to go there for dinner one night. Well, you can see where this is going. Scott has no interest in seeing Star Wars again (although he swears it was really good, calling it the third best of the six so far) and his schedule has worked out so that the night he can go to the Mexican place is Thursday.

So as of this writing, I am torn as to which of the two offers to accept – food or Star Wars. Keep in mind that I hated the first of the new Star Wars movies with such a passion that I never saw Send in the Clones in a theatre. In fact, I don't know if I have ever seen the second one from start to finish in one sitting, although I have seen a patchwork version on cable in varying chunks. But people swear this one is good – most of the WotC staff who saw it seem to agree on that – and I know that if I don't see it this week, it is highly unlikely that I will see it until it precedes an episode of The Sopranos on HBO. 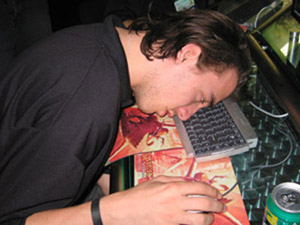 No rest for the weary Road Warrior.It is a most unusual sensation to cover a tournament during the week. Everything about tournament coverage screams "weekend" to my internal body clock. Of course nobody's body clock is as off-kilter right now as Olivier Ruel's. Olivier and fellow Invitationalist Julien Nuijten became the first players to reach Level 6 status in the Pro Players Club and Olivier wasted no time cashing his first $500 appearance fee at Grand Prix-Matsuyama. He also won another $500 for his 12th-place finish.

Olivier came to L.A. from Japan, which he traveled to immediately after Pro Tour-Philadelphia. Before Philadelphia, he was at home in Europe. He has gone through four dramatically different time zones in four weekends and it was readily apparent in the normally exuberant Ruel's slumped posture most mornings. He was stretched so thin he was practically transparent.

Oli played against his brother Antoine during the Auction of the People and lost despite the fact that Antoine mulliganed down to three cards and missed land drops for the first two turns. It was not Olivier's favorite moment on the week. He would prefer that if you were going to look at one game replay that instead you looked to his IPA match with Bob Maher in Round 2, not only because he won a game he thought impossible to win but because IPA draft is such an interesting format. Especially for us old-timers. 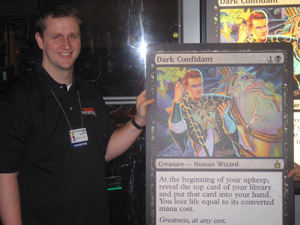 The Great One and his Dark Confidant.I spent some time talking with Maher this week and as always came away impressed with the man they call "The Great One." Bob has played very little Magic since his win at last year's Invitational. During the players dinner on Monday night someone brought up the topics of the Players Club and the Hall of Fame. Hall of Fame members – whoever they will be – receive automatic Level 3 benefits for the rest of their lives under the new plan. That means invites to every Pro Tour and a $250 appearance fee. Bob is in elite company as one of only two players to win a Grand Prix, Pro Tour, Masters Series, and Invitational, so when you talk Hall of Fame Bob's name tends to get thrown around a bit.

Bob claimed that even if he was enshrined that he would not actually take advantage of the Pro Tour qualification. He has left Magic behind as he and his wife Courtney prepare for the arrival of twins and he embarks on a new career. He still loves to play Magic but does not foresee having the time to dedicate to playing enough to warrant attending a Pro Tour. He is highly competitive and the idea of showing up and not doing well did not sound like fun to him, although he did opt for fun in the closing rounds of the tournament – much to his chagrin coming into the final day of action.

At the end of 10 rounds of play in the Invitational, that competitive nature was showing through. Bob did not have time to prepare for this event and found himself scrambling for decks to play in Online Extended and Standard. He settled on Affinity for Extended but had no idea what to play in Standard. He turned to one Michael J. Flores and was offered a choice between a solid mono-red deck and an untested deck MichaelJ had been toying around with on paper. Bob figured "what the heck" and in the spirit of the Invitational took the deck that sounded like more fun to play. He also loathed the idea of playing a deck that anyone else would be playing this week due to his inexperience with the current constructed archetypes. “I cannot possibly win a mirror match of any kind this week,” he admitted. 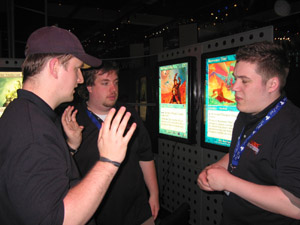 Jeroen Remie stands in the presence of two previous Invitational winners.He was actually sanguine about playing the deck early on in the tournament when he had no expectation of doing well. But then Randy Buehler noticed that as Bob progressed in the tournament, he became increasingly hard on himself – berating himself for subtle misplays and raising his intensity level. Randy took this to mean that Bob knew that at 6-4 after 10 rounds, he had a shot at becoming the first player in history to repeat as an Invitational winner.

Suddenly the thought of playing a deck that was theoretically sound but untested left Bob feeling dubious about his chances in those crucial final rounds. He was wishing he had a deck with more practical than theoretical upside and asked if he could sub in another list.

Bob was not alone in wanting to change his deck, by the way. Larabee said that almost everyone came up to him and asked to make changes to their lists, which had been required to be submitted by the end of Day One and were already locked in.

Of course, you already know how this turns out. I asked Bob for his replay highlight of the week and he advised that you watch his Round 3 match against Julien Nuijten, when Julien pulled off the combo of Obliterate with Penumbra Wurm in play. “The games I won were not very interesting. You don't see Obliterate-Penumbra Wurm very often – especially off of a double mulligan,” Maher said.

When I interviewed Kai in Philadelphia, he seemed surprised that there was a perception among the masses that he does not play much Magic outside of the Pro Tour. Nothing could be further from the truth. Much was made this week of Sam Gomersall's incessant drafting on a second MTGO account while he as playing in the Invitational. During Kai's match with Sam in Round 10, it was Sam who had to prod Kai once or twice because the German Juggernaut had a side draft going on as well. That match was quite funny, as Kai had no idea he was facing Battle of Wits until his Disciple of the Vault was Excluded and he looked up to see 200-plus cards in Sam's deck.

Kai would prefer that you look to his match with Carlos Romao during the Auction of the People. In game two he found himself facing down Nezumi Graverobber and Nezumi Shortfang. “He flipped the Robber on turn four and it was a tough game to get out of with a win.”

Firestarter – In order put them you will.

Still don't know which way the wind will blow Thursday night, but I imagine that most of you have seen the newest entry into the Star Wars canon by now. How do you rank the six films? Is this one better than Jedi, as Scott would have me believe? Which do you like better, A New Hope or Empire? (Apparently this is a deeply divisive question among WotC R&D members.) Chime in with your opinions on the forums. You should also feel free to recommend your favorite Invitational match replays, one of the cooler ways to watch a game of Magic.