Welcome to the Block 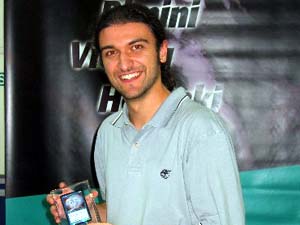 Marco Cirigliano, 2nd place GP Zurich ‘04 week I managed to snag the decklists from a Grand Prix Trial that was held during US Nationals weekend. It was the first glimpse inside the new block constructed format that was born from the introduction of Fifth Dawn and the banning of Skullclamp. It was sort of a spring training for the PTQ season that got underway this past weekend. Not only was there a Grand Prix that was held in Zurich but there were PTQs and Grand Prix Trials held as well. I happened to be at Origins this past weekend, which was the site of two PTQs and I managed to grab the Top 8 decklists from both events. These lists and the Top 8 from Zurich should give you a good idea of what to expect at your local PTQs and Trials.

The most interesting development over the weekend was the second place deck from Grand Prix Zurich—a blue-green concoction with some countermagic and Crystal Shard. The deck plays like a block version of the green-white slide deck from Standard. It can cast Shaman every turn, Witness up anything at will, dig out all the land in the deck with Solemn Simulacrum, and ping with Triskelion all the live long day.

My first thought when I saw this list was to try and build a new version that used Vedalken Mastermind instead of the Crystal Shard. With everyone running green for artifact destruction it seemed like the Mastermind would be harder to kill. He presents several problems though. He costs double blue, you can't use him the turn he comes into play, and he has no interactions with your opponent's board. Even if you only get one or two uses out of your Crystal Shard it should be a huge game swing in your favor; whether you are hitting two artifacts with one Shaman or returning some Tooth and Nail cards to an opponent's hand.

Tooth and Nail was the winner of the event but the blue-green list was all anyone could talk about as we followed the coverage this weekend. The deck looks like the best team sealed deck you could ever hope to build but after this weekend Crystal Shard will finally have to get some respect as a constructed card. It should not be that surprising since its more expensive predecessor—Erratic Portal--saw some constructed play.

Blue and green were the big colors this weekend with many players taking advantage of the new counterspell Condescend and the previously underused Annul. In addition to Matteo's deck there was also a blue-red March of the Machines deck that made the Top 8 with Annul and Condescend. There were also two Affinity decks with Cranial Plating as well as two mono-Green Beacon decks. The final deck was almost mono-green but it touched blue for Thirst for Knowledge and the startlingly potent Echoing Truth. All in all a much more varied metagame than was originally anticipated. Note that there was not a single Ironworks deck in the Top 8—a theme that continues through the two PTQ Top 8s that follow. (One quick note, a few of the decks I'll be covering today are still missing a card or two. Even as is I feel those lists are still well worth including, but I'm hopeful we can still complete the lists.)

There were a couple of things that really excited me in this Top 8. The most dominant deck was a green-red deck that the players named the GFC Freshmaker. It took three of the Top 8 spots and it seems like a very solid deck to be playing in a field full of Affinity and Ironworks—although that is likely to change as the metagame shifts with the results from Zurich and these PTQs.

Kyle Smith's Top 4 deck is very intriguing to me. There are only a handful of ways to deal with a Pristine Angel in this format and you can probably sit back and counter them all. Barter in Blood and Death Cloud should be susceptible to condescension and Oblivion Stones can be Anulled. (I have not seen anyone playing Solar Tide…yet.) The other exciting card in the deck is Vedalken Shackles. Mike Flores wrote a column this week about trying to abuse this card. It seems that Kyle has the right idea with maindeck Leonin Abunas to protect his Control Magic on a stick. The deck went on to win the PTQ on the following day.

The other card that has intrigued me is Grim Reminder from the sideboard of Ervin Tormos' mono-black deck. He had it in his sideboard for the mono-black mirror no doubt but it really seems like it would shine in a green on green match. Green is far and away the most commonly played color and has redundant cards from list to list—Eternal Witness, Viridian Shaman, Beacon of Creation, all the artifact destruction spells, etc.— so a black-green list with Grim Reminder might be a possibility. In fact, there was one deck in the Top 4 of the next PTQ that was green-black with four Grim Reminders in the board so we may already be seeing this take shape.

Somehow, despite every deck hating—loathing even—artifacts, Affinity continued to place multiple decks in the Top 8. None of these decks chose to play Cranial Plating, with Night's Whisper taking up those four spots. It is really a testament to the raw power of the Affinity decks that they continue to do well with all the obstacles that are thrown in their path. It also took multiple spots in the second PTQ of the weekend and picked up the moniker Hatless Affinity for the lack of Cranial Platings. It finished second to blue-white and a deck with Plating also top 8'd.

Has it found its place?

The Affinity deck that featured Cranial Plating also featured Paradise Mantle as an additional zero casting cost artifact and mana fixer. As I mentioned earlier, I was especially intrigued by Craig Frost's green-black Top 4 deck with the Grim Reminders in the sideboard. It seems like it could be a very exciting metagame deck if you moved some number of them into the maindeck as burn against all the green decks that seem to be flying about. I would also make sure to include Echoing Decay to deal with those pesky Beacon tokens.

Eric Taylor made the Top 8 of this PTQ with a Tooth and Nail deck with Mephidross Vampire in the board---similar to Manuel Bucher's winning deck from Zurich. I don't know that I could resist inlcuding that combo in my maindeck. Especially with so much green and affinity in the Top 8 of all these events.

As you can see there are quite a few decks and strategies to choose from for this PTQ season and it is only a week old. Do with these lists what you will. Those that prefer not to compete with decklists from the net should still have ample lists to use a playtest gauntlet and offer inspiration for your own creations.