n May 2007, the Future Sight expansion was released. It was the expansion originally meant to introduce planeswalker cards to the world ... but their design and development simply weren't done in time. We needed those cards to be as close to perfect as we could make them, so we held them back and included them in the Lorwyn expansion.

We wanted a way to foreshadow the arrival of Magic's new stars, however, and we did so in a way that would become apparent only much later: 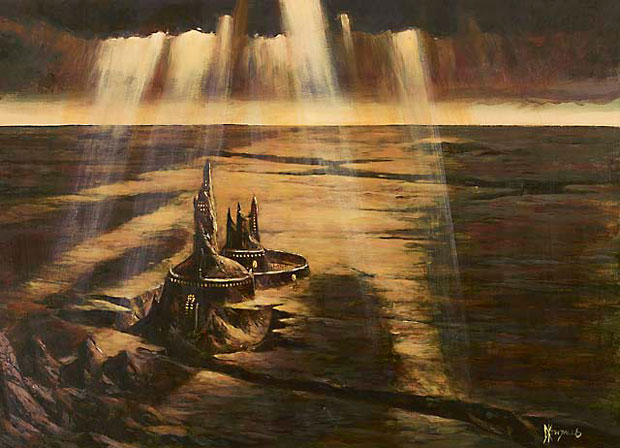 Did you notice that handprint of sunlight being cast across the landscape in the Barren Glory card? Now fast forward to Gen Con 2008, where Magic senior art director Jeremy Jarvis sported a T-shirt with a similar handprint on it. 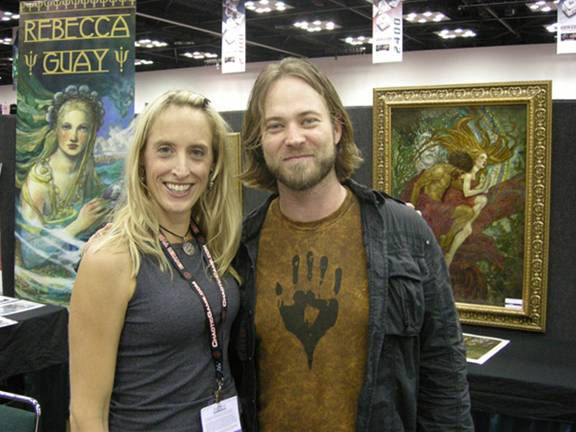 You hadn't seen that handprint somewhere before, had you? You had, just a month earlier, when Garruk Wildspeaker puts his summoner's mark on the Ursoth in Part 1 of "The Hunter and The Veil."

That handprint-shaped smear appears again in Part 3 of "The Hunter and The Veil," when the necromancer Liliana Vess planeswalks away from the scene after besting Garruk.

And a similar image of Liliana planeswalking appeared a month previous as part of Magic's redesigned website: www.wizards.com/Magic/Multiverse/planeswalkers.aspx

Okay, okay. Time to stop being coy. Here's the full version of that image of Liliana, illustrated by Scott Fischer, never before seen in its entirety:

That handprint-like shape corresponds to a symbol—a symbol that represents planeswalkers and their ability to traverse the planes of the Multiverse. We've been slipping it in here and there in a variety of contexts, slowly making it part of Magic's iconography. Here's what it looks like on its own:

Maybe you've spotted the planeswalker symbol on the backs of judges' shirts at Magic events, or even in the design of tournament "arenas" like the one at Pro Tour Kyoto:

In fact, you've already seen it many times, at least once in every issue of Magic's web comics, for example, and in well over a dozen other places as well … some of them quite hidden. When you see it in the context of Magic’s story, it represents a kind of æther imprint — almost always, whenever a planeswalker leaves a plane, this mark will appear in some way, as though the planar fabric has metaphysically acknowledged the act. When you see the symbol in real life, it marks a place or a chance for players to gather, to test their mettle and prove their skill.

We’ll leave you with this image, a bonus wallpaper for this week, which we feel sums up the planeswalker symbol pretty well. Jace stands at the singular base of the shape. Five distinct paths—it’s always five in Magic, isn’t it?—span out before him in the æther like five futures. 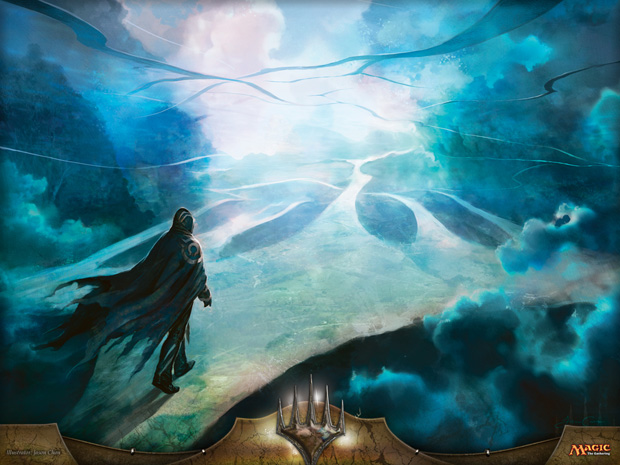