Where Numbers and Colors Collide

In the blurry world of art evaluation, putting numbers to your feelings may bring things into focus.

few days ago I had a conversation with Magic art director Jeremy Jarvis. I was patting him on the back for a job well done on the last few sets—Future Sight, Tenth Edition, and Lorwyn—sets that, in my humble opinion, have an overall art quality that top all their predecessors. In our conversation I mentioned how much I had always loved the art from Mirage, and how I had always put it at the top of my art list. It has so many different art styles as well as early work from a lot of Magic's long-time heavyweights like Donato Giancola and Kev Walker. 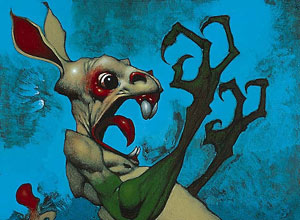 But then I went back and actually looked at the set again. Wow, what an eye-opener. My mind had filtered out so much of the set that it just didn't have any room for—the junky cards that I never played with and the art that wasn't worthy of the space in my mnemonic museum. What I found was that Mirage has all those great things I had mentioned before, but it also had an abundance of, shall we say, less than stellar imagery. Oh how the mind plays tricks. All these years I had been putting Mirage on a pedestal when really I was just admiring her "good side."

And this brings me back to what I think Jarvis has done in his short tenure as art director—which is to make each set look good from all angles. My impressions of the recent sets are, as an artist and a fan, really positive. Back in the day I always felt like I could bust out a pile of any 20 cards and claim that I could do better than half of them. (OK, I was young and not yet painting Magic cards at all. I had to pump myself up in order to keep myself slogging through all the rejection letters.) Now, with over 10 years in the biz, I look at the cards and find myself looking up at a lot more than half the cards. That's a tremendous change. At one point, fresh-out-of-college scrub dude feels like he could overpower half the field, and now the ten-year vet is looking up at the majority. I think Jarvis deserves a big communal hug from all of us. That goes for the few previous art directors as well. Matt Wilson, Ron Spears, Dana Knutson, and Jeremy Cranford all slowly raised the bar, and our expectations along with it. Now we expect to see "good" on every card. Try finding that in just one pack of Mirage, let alone the whole set.

I was intrigued by my own misinterpretation of the art "goodness" of Mirage as compared to that of the new sets. As time goes by, I should be more critical of the art as my expectations get higher. I should be feeling less impressed, not the other way around. Unless, of course, the art is just getting better. But how can we filter out all the nostalgic noise and compare apples to apples. It's not easy, but I think I have come up with a way.

I just read Aaron Forsythe's column a couple days ago that got into "pointing" cards. For those of you who are not familiar with pointing, it's the process of rating cards for a specific format so that the Development team can see which colors might be too powerful or too weak compared to the others. It gave me an idea. What about "pointing" the art? As long as the criteria are the same across the board, we should come out with some data that we can talk about—or throw in the trash because art is meant to be felt, not rated. (It's funny, I almost talked myself out of trying this little experiment with that sentence alone. But, as it turns out, it fits into the spirit of my pointing criteria.)

Since we cannot possibly agree on what good art is, or what is better than what, we'll need to work with a scale that is a little bit more heart and a little bit less head. The Development folks use criteria like "This card makes me want to play this color. (Given that I'm playing that color, I will play this card 100% of the time.)." This is one of 11 criteria that bridge the gap between 0 and 5. In our case, we'll just have 5, and they'll all shoot from the hip:

You'll notice that we're slinging opinions only here, and very cursory opinions at that. This experiment is supposed to look at our initial impressions of the art in a card set. If we really sit and dig into every piece of art, not only will we be here 'til next year, but we'll also start reading into the cards too much. We might start thinking about who the artists are and comparing the art to their other work rather than to Magic art as a whole. We might let our feelings about the power of a card itself influence our feeling about the art. We might find ourselves snooping for problems that are too minor to worry about. If you think about it, Magic art is meant to be seen very small, sometimes very briefly, and often tilted sideways or upside down. Initial impressions are important. How the art looks at 8" x 10" hanging on your wall is all bonus material.

Also, you'll notice that unlike the one used for Limited pointing, my scale does not go from 0 to 5, but from 1 to 5. No art is completely worthless, though some cards might be worthless in a particular format.

So here's what I am about to do: I am going to cruise through Mirage and Future Sight and record my 2-5 second impression of each piece of art. Once I have blazed through each set and compiled my numbers, I'll return to reveal my findings and talk about any interesting discoveries. Away we go. (Play along if you like, then compare your numbers to my own. Add up all the numbers for each card, then divide by the number of cards in that set. The result should be between 1 and 5.)

Here's how it all shook out:

What struck me first about this experiment was the fact that Future Sight had absolutely no 1s. None. The Creative Team has babbled from time to time about what we felt the difference is between the art of the old days and that of now, and we had come to the conclusion that the art is not necessarily better on the top end, but the bottom end has been brought up considerably. Now I can see that our assessment was spot-on. In fact, there were only eighteen 2s in Future Sight out of 180 cards. Mirage, on the other hand, has twenty-three 1s and seventy-four 2s out of 350 cards. Future Sight cut the below-average art from 28% of the set to just 10%.(Remember, this is just based on my little ol' opinion. I encourage you to try doing the same thing to see how it shakes out for you. Something tells me it will be close.) 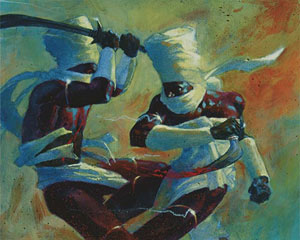 The top end was actually not as close as I thought it would be. Mirage ended up with seven 5s out of 350, and Future Sight with ten 5s out of 180. That's a pretty impressive leap as well. As Magic matures and continues to show itself to be a long-lasting powerhouse in the gaming industry, more and more world-class artists are going to be willing to bespangle the cardboard. 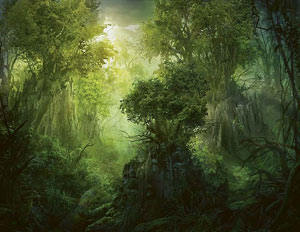 One place this really seems to show itself is on the land cards. Interestingly, four of Future Sight's ten top-rated cards are lands. On the other hand, lands brought up the rear in Mirage. This does not surprise me at all. In the past, land cards seem to have been given the redhead treatment, like the many backing bands that faded into obscurity after their front-men went on to stardom: Marky Mark's Funky Bunch, Paul McCartney's Wings, Tom Petty's Heartbreakers, Huey Lewis's The News. These expendable blokes lurked in the dark, behind the spotlight, just like the old lands did—especially the basic lands. But Jeremy Cranford changed that, and Jeremy Jarvis continues to carry the torch. Now the lands are not seen as just "background," but rather as the most important players in setting the scene, the feeling, the tone of a card set. 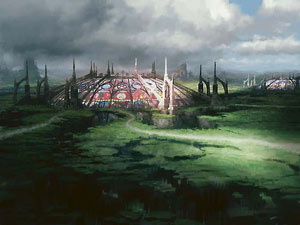 As a whole, I was a bit surprised to see Mirage shake out a little below average. Remember folks, this was what I thought was my favorite art set. I guess my mind was clouded by all the happy, free feelings I had when I was enjoying Magic just as a player. When I get down to it, Mirage just doesn't stack up against Future Sight (or any of the other recent sets, I would guess.)

Take a whack at "pointing" the art in these sets, or any others for that matter. Try to trust your gut and not be swayed by the nostalgic feelings that will bubble up if you stare too long into the eyes of an old cardboard friend. If you do try it out, please post your results on the message boards. I'd love to see it, and I am sure other folks would too. (Also, you'll get the fringe benefit of having a quick look-see at so much great art. Weeeee!) The best possible way to view the art would be on actual printed cards. I doubt many of you have whole sets lying around, so the next best thing would be to use the biggest card window setting in Magic Online. Finally, you can use Gatherer to call up images of every card in a set, but you'll have to click through them one by one.