a month ago, I had the privilege of attending the biggest tennis tournament held on soil twenty minutes from my house. The final match of the 2007 Rogers Cup pitted Serbia's Jelena Jankovic against the number-one ranked player in the world, Belgium's Justine Henin. Having never seen professional tennis in person before, I was immediately impressed with the power on display, especially from the diminutive Henin, who gave up a great deal of size to Jankovic but still hit the ball harder.

In my zeal to sound like a sportscaster, I leaned over to my friend to express, quite astutely, that Henin was like a powder keg, a small package full of densely-packed explosive potential. Unfortunately, there was a bit of a mix-up between the part of my brain that generates sports / incendiary device metaphors and the tip of my tongue. Thinking that the powder keg metaphor was inapt anyway, I decided to just call her a little "powerhouse" instead. That was my plan.

What actually came out of my mouth was, "Boy, Henin's a real powder house."

Now, I think you'll agree when I say that that sounds much less dangerous, like something not so much packed with "explosive potential" as with powder rooms.

What does any of this have to do with my preview card, in this, the last week of Lorwyn previews? A lot, I assure you! Like the Belgian tennis superstar, this little guy packs a wallop (especially when he goes on vacation). Charge him up like a Red Mana Battery, fill him full of mana and he'll spit it all back out and then some. With enough juice, he'll start whistling like a kettle, except his tune is a little angrier. More seething, you might say. Check out this little powder house. 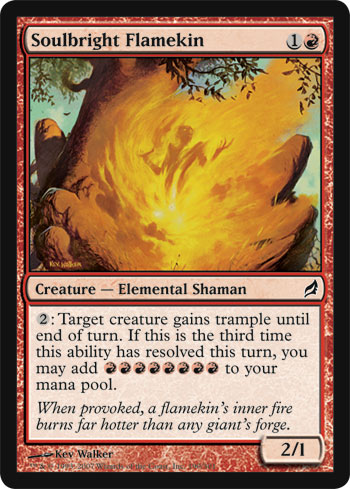 If you are looking at this card and frequently asking questions, read this part:

From the Lorwyn FAQ:

Two-mana, two-power red creatures are usually on, or beyond, the cusp of playability in high-level Constructed decks, to say nothing of the kinds of decks we deal with here at House of Cards. Soulbright Flamekin beats for 2 just like an Ironclaw Orc, Firebrand Ranger, or Emberwilde Augur. Unlike those cards, the Flamekin has not one, but effectively two useful abilities. If you're playing an aggressive deck with normal-sized creatures, trample allows you squeeze in a few more points of damage while all but eliminating a thorn in the side of many beatdown decks: the never-ending string of chump blockers. If you're playing a deck with, say, fire-breathing dragons, your offense becomes nigh unstoppable.

The unusual thing about Soulbright Flamekin is of course that last line of text. Shades of "successfully cast"! The word "resolve" doesn't appear in the rules text of too many cards. As far as I can tell, it's only in the reminder text of buyback spells and on a few oddballs like Ertai's Meddling and Goblin Welder. This Flamekin is unique (outside of Lorwyn, anyway) in that it cares about the number of times its ability has resolved in a turn and to show its appreciation, it gives you eight freaking mana when its ability resolves for the third time in a single turn. You effectively get your trample for free with an extra

thrown in for good measure. What was I saying about those fire-breathing, often trample-deprived dragons?

Soulbright Flamekin is definitely a nifty little tool that can fit into a variety of decks. To use the buzzwords of the day, this card is more modular than linear (if you look at it on that particular continuum), and its hyperbolic rating is like nothing I've ever seen (or ever will see again). Breaking Soulbright Flamekin down into its component parts, we can see that:

Let's see if we can take advantage of all four of these things in the next few decks.

The Part of the Alphabet Between K and P

Now, I don't know what other Elementals are coming down the pike (besides Dread, previewed by The Ferrett, and Cloudthresher, previewed by Frank Karsten), but I do know that there were already plenty of good ones in the pre-Lorwyn Standard. (For a full listing, check out Monday's Magic Arcana.) Of those, there are a few that seem tailor-made to tag-team with Soulbright Flamekin, creatures that will appreciate the trample as well as the resultant mana boost. The first two that spring to mind are Rift Elemental, with its time-counter diet, and the double-striking, fire-breathing Char-Rumbler. Other Elementals just appreciate the eight red mana (like Lightning Serpent) or the trample (like Storm Entity). Rift Elemental and Storm Entity have some oblique synergy, since the former digs spells with suspend, spells that enable the kind of "big turn" that Storm Entity loves so much. To accommodate them both, I included Lotus Bloom, Rift Bolt, and the king of time counters himself, Greater Gargadon. Not only will Soulbright Flamekin allow you to hardcast your Gargadons earlier than usual, but that big vanilla beast will really benefit from the trample. Grinning Ignus, meanwhile, is another fine Elemental and a great storm enabler. Tenth Edition's Bogardan Firefiend recently betrayed its Elemental roots and has some nice synergy with Greater Gargadon. In fact, it makes me wish there was a Bogardan Gargadon, if only to watch people try to pronounce it.

There are plenty of excellent uses for eight mana using the Standard card pool. Bogardan Hellkite and Akroma, Angel of Fury are two of the best, but we'll let Spike have those for now. Instead, I'm going to use Hamletback Goliath (previewed by The Ferrett), a creature, like Greater Gargadon, just crying out for trample, as well as a great card to pair with Grinning Ignus.

As I said, there are plenty of good red Elementals in Standard right now, and we haven't even seen all of Lorwyn yet. Sulfur Elemental is perhaps the most powerful (at least against certain strategies), Coal Stoker is another potential storm enabler, and Bogardan Rager is, uh, an okay Limited card.

That covers one of Soulbright Flamekin's creature types. What about the other? Well, in the past, Shamans have proven to be pretty powerful, largely because of the mana-generating ability granted by the Shaman "lord," Sachi, Daughter of Seshiro. Usually backed by her snake brethren—Sakura-Tribe Scout and Elder, in particular—these decks can produce a ton of mana. Soulbright Flamekin lets them produce that much more, and the trample it grants is especially useful if you're using that mana for a card like Tribal Unity.

As I mentioned before, Soulbright Flamekin likes "fire-breathing" creatures, which for the purposes of this article, I'm going to call any creature that can give itself +X/+0 for mana. There are a couple Shamans that fit this description, and it turns out that both desperately want you to give them trample as well. The first is Feral Animist. The second is Sokenzan Spellblade. Kumano, Master Yamabushi provides another nice trample-worthy body as well as an outlet for red mana.

But what about all those wimpy little 1/1 mana makers? Since you don't see too many Little Girls in real Magic, why bother giving them trample at all? Well, we're in green and red. We can grant trample with great ease. That can only mean one thing: Stonebrow, Krosan Hero.

I rounded things out with a couple of mana-intensive and trample-loving fatties: Ivy Elemental and Rockshard Elemental. I chose a pair of Elementals to narrow the deck's range of creature types for Tribal Unity, but in the absence of that card you could use any number of big monsters, such as Shivan Hellkite, Excruciator, Scourge of Kher Ridges, or Boldwyr Intimidator.

One more deck and then I promise I'll leave you alone for the rest of the week. When I first saw Soulbright Flamekin in the list of cards we were previewing, my thoughts immediately turned to dragons and Stonebrow. Those are both fine ways to use the card, but the coolest tag-team partner for the little "powder house" was a card that was slated to appear after my Flamekin preview. We did a little schedule flip-flop with my other preview, Rings of Brighthearth, just so I could refer to Mark Rosewater's Monday card—the awesome and incredibly creepy Mirror Entity.

Soulbright Flamekin works with Mirror Entity in two important and obvious ways. It gives your creatures trample and it gives you a mana boost, two things you are looking for when can turn your creatures into X/Xs for X mana.

Since both creatures have activated abilities requiring a payment of mana, I figured this would be a great time to use Heartstone. Now instead of giving you eight mana when you put in six, Soulbright Flamekin will give you eight for three! How can you spend all that mana? Well, since I randomly decided to make this a Goblin deck, you can use that mana to unmorph a Warbreak Trumpeter (more creatures = more X/Xs), pump a Goblin with Goblin Taskmaster, have your Spitfire Handler spit fire, or use Blaze-on-a-stick Goblin Dynamo to send damage dome-wards. Captive Flame is the chief non-Goblin use.

Moggcatcher is great with Heartstone, but, more importantly, it can fetch Mirror Entity as well as the aforementioned Dynamo (the latter at a significant discount). Once you've got an Entity in play and the ability to make your creatures into X/Xs, the two Goblins with abilities that key off their power (Spikeshot Goblin and Rabble-Rouser) become pretty absurd. The last creature I added isn't a Goblin, but since the deck is red and white I figured I'd use him anyway. How could I not use Boros Swiftblade? Not only is it completely ridiculous with Mirror Entity, but it's not bad with Captive Flame, either.

I hope I didn't just blow all of my Changeling Week material.

Until next time, have fun with red mana.

Go to your local store for Lorwyn Release Events October 12-14 for lots of fun activities and to play with the Lorwyn set as soon as it goes on sale.

Get a sneak peak at a Lorwyn Prerelease on September 29-30.