yes, exciting times – Planar Chaos is upon us! Today I have the honor of previewing a card that almost wasn’t. It was pretty late in the game during Planar Chaos development when a few of us on the Creative Team took notice of the fact that Planar Chaos plenty of nostalgia and not enough “now.” Time Spiral pulled a sneaky trick and gave us Teferi, Mage of Zhalfir – a card of the “now” and of the past. Even though the name and story of Teferi are very nostalgic, the character on the card is actually a post-apocalyptic contemporary. Only a chronomancer of Teferi’s skill could pull that one off. ; ) It was our feeling that Planar Chaos needed a little bit more of the now, and could benefit from having a legendary character from the Time Spiral block novels. The Dev team could have easily shut us down, waving the banner of the old days, citing nostalgia as the theme of the block. But to their credit, they did not. In fact, Planar Chaos Lead Developer Devin Low not only made room for the card, but also agreed to sit down with me and hammer out a card that fit the character perfectly! Devin is one of my favorite Wizards – and the only one who shares with me a proper appreciation of the metal con queso that is Manowar.

The character we decided to make a card for is Radha. Those of you who have read the Time Spiral novel have had the image of this beautiful barbarian badass burned into your brains. For you, her card will make a savage smile split your face. But the reality is that most of you have not read the novel, and have nearly no idea what she is like. Nearly no idea. It is quite possible that you have taken notice of the Time Spiral card Undying Rage. It’s on this card, not the card I preview today, that Radha made her Magic debut. What does it tell us about her? Let’s look first at the flavor text:

Radha was born in Skyshroud, but her temper is undeniably Keldon.

So she’s an elf – born in Skyshroud. But that does not mean what it used to mean; Skyshroud was plucked from its roots and transplanted in the middle of the cold, rocky, barbarian country called Keld. Keld is where the sickest, maddest and baddest warlords in Magic are from. The art does not really further this, though it does show her in her typical pose – weapons drawn. The name and flavor text of Undying Rage tell us that this elf may have a stone fist in addition to a green thumb. So how will this stuff show up in her own card? In the name? On the type line? What about the text box?

Before I answer those questions by busting out the card, I’d like to provide a little more background on Radha in the form of some tasty excerpts from the Time Spiral novel. Normally I would show you the card (or reveal it bit by bit) and then babble about it. But in this case, I’d like you to learn about Radha, then see the card – just as Devin and I looked at her portrayal in the novel and then began constructing the card. So here are a few dandy passages that will give you a greater appreciation for the card once it’s revealed to you.

Her name was Radha, but that was the only bit of information he could easily skim from her mind. The rest of her thoughts were guarded and violent and would require significant effort to pry out. From the few seconds he’d been watching her and reading her, he knew several things for certain. She was a warrior. She was proud. She was physically formidable.

She was also beautiful, the most welcome sight Teferi had seen in quite a long time. Mana flowed to and from her so freely that she glowed and sparkled to his ascended eyes. She was like a fresh, bright flower among dry weeds, a clear mountain spring rising from an otherwise flat and featureless desert.

Oooh! There are some toys to play with in there. Warrior. Mana. Violent. Beautiful.

Driven by an unseen wind, Radha’s hair spread out behind her like a cobra’s hood. Her eyes flashed. The air around her head and shoulders hissed and popped as it filled with tiny green flames, each one distinctly shaped like a small oak leaf. Soon there were more than a dozen of the magnificent emerald blooms flickering around her.

Radha relished in the looks of surprise and confusion. From her belt she drew another tear-shaped blade, identical to the one she’d stuck in the Gathan’s face. The finger-grips along the tear’s inner edge allowed it to fit perfectly in her hand, the sharp point emerging from the top of her fist like a small dagger.

Radha turned from the wounded baton woman and the other strangers to face the Gathans. She drew a second tear-shaped blade, holding it with the tip extending from the bottom of her fist. Arms flexed, Radha raised both weapons toward the raiders.

“Radha’s hair spread out behind her like a cobra’s hood.” “Arms flexed, Radha raised both weapons toward the raiders.” That potent image has already played out on a card – take another look at the Undying Rage art above. But the part that really grabbed me was the whole flickering emerald blooms thing. That’s some Green mana, folks. No doubt about it.

Here’s a short one. There were plenty of longer, more potent ones on this subject, but I do not want to give away too much – just in case some of you are intrigued by Radha and wish to read all about her in the novel.

Radha took a breath and intoned, “Coal and tinder, fire and spark, Keldons are fire, and Keld commands . . . burn.”

This next one is one of my favorites:

Radha’s nostrils flared. Her eyes sprang open and she extended her neck, stretching her chin up as far as it would go. Then Radha’s jaws snapped open and she slammed her face down, biting into the tough wad of flesh between Greht’s forefinger and thumb. Radha’s teeth clenched tight and the Gathan’s blood spilled from her lips.

A jolt of greenish eldritch force surged up Greht’s arm from where Radha held him, and when it reached his torso the impact broke his grip and sent him staggering back a step. Radha twisted as she fell so that she could hurl the tear-shaped blade she held into Greht’s throat before she hit the ground. She drew back and cast it, straight and true, as her shoulder blades thumped into the stony ground. 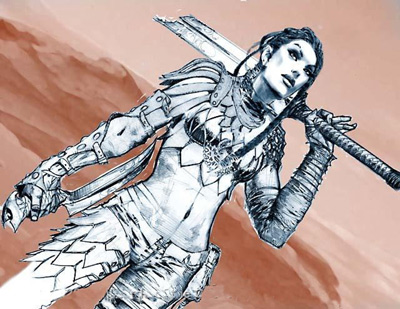 That’s my girl! If there’s anything I took with me from the Time Spiral novel it was that Radha’s resting state is with teeth clenched and face caked in blood. This is just one of many passages in the novel that really get down and dirty explaining Radha’s feral grit. It was just this sort of description that ended up having a profound effect on the card. Once Devin and I cooked up a card design, Cranford got down to biz on getting a sweet piece of art made for Radha. Last week, in my Milk and Cookies interview with Jim Murray, I mentioned a upcoming piece of Murray art that kicks complete ass. Well folks, this is the one. To the right is the sketch that Jim sent in. Everybody loved it. She looked hot, she looked smug, she was armed…everybody dug it. Everybody…but me. Gasp! “Matt did not like a Jim Murray drawing!?” Be calm. We all know how much I love Jim’s work – but this one was just not…right. Where was the rage, the clenched teeth, the blood? I made my case to the team and to Jeremy Cranford. We have a policy of not asking artists for frivolous changes. I knew this, but argued that this change would not be frivolous. It would be appreciated by every person who would ever read the Time Spiral novel and, as it has turned out, every one of you. Since Jim is an eternally good sport, he was happy to make some changes. I think they have made this card. The art gets me going. It makes me want to knock some heads— the same way the Skarrg, the Rage Pits flavor text does. Send in the torch pigs!

Anyhoo, without further ado, take a peek at how all of this has come together to form .

Now that’s the Radha I know and love. She’s lean, she’s mean, she’s an elf and a no-frills Keldon warrior. She makes some green mana, and she makes a healthy supply of red when she’s pissed off. The card mechanic encompasses an important part of her character – that she is a rare fountain of mana in a dried up world, and that her power grows when she does what Keldons do: battle! The skill and rage with which she battles is represented in the art. Oh yes, it is! Look at that defiant, fearless glare, that shattered bloody blade, that severed head. The lady means business. I can just hear her saying something crude and goading, something like… like…

“Run home, cur. I’ve already taken your master’s head. Don’t make me thrash you with it.”

Ha! How can you not love her?