It's been a while since my last article about the Wide Beta. With a major update scheduled for the downtime on Wednesday, July 17, I wanted to give you a brief overview of where we are at in the Wide Beta process, including reviewing the Wide Beta Spotlight, discussing the changes in the new update, and laying out a rough guideline for the future of the Wide Beta and the Magic Online client.

On June 12, we held our first Wide Beta Spotlight , which gave us a good look at what we can expect when the Wide Beta is the only version available. While not everything was perfect, we gathered valuable information about how the Wide Beta performs under the player load of a typical day, and we were generally pleased with how the client performed in that regard. When looking at the client itself, however, the Spotlight confirmed that we needed to focus on stability and performance issues, which is the basis for the July 17 update, but more on that in a bit. 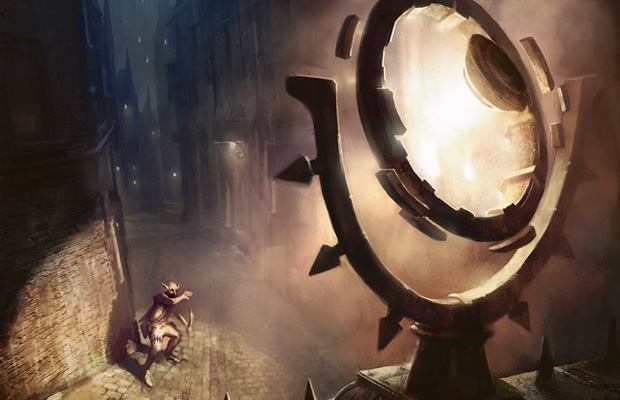 Another key take away from the feedback is that we need to do a better job of informing players about the Wide Beta features and how to use them. Players often voiced frustration about features or functionality they thought were missing, even though those things are actually available in the Wide Beta. The good news is that we are in the process of creating some basic video tutorials that will be integrated into both the web and the client. We will also be working on updating the Help to be more robust and informative as we lock down features leading up to the time when we turn off the current client. Finally, we will work to address general usability issues that were commonly shared by players submitting feedback.

Beyond stability, which tends to be more on the quantitative side, we also got a lot of great information from the feedback form. Hundreds of players took time to tell us about their experiences, both positive and negative. As with all subjective feedback, however, you will end up with situations where one player loves the feature that another player despises, and the Wide Beta is no exception.

Digging into the specific feedback results, many players liked the cleaner look and feel of the Wide Beta, with the basic navigation, Home, Account, and Help being well received overall as players were able to find their way around the client easily. Card appearance, drafting, and Limited deck building all received a lot of positive feedback as well. 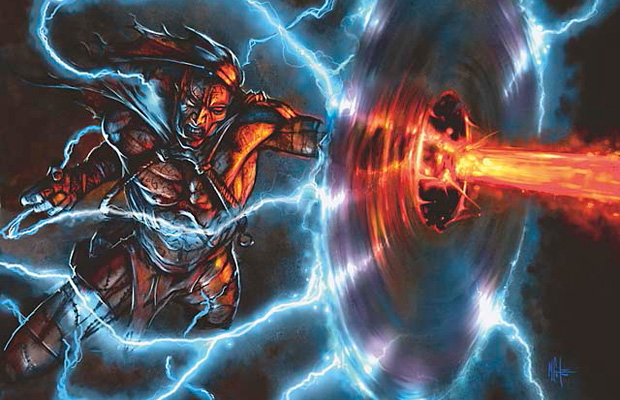 When we get to more complicated areas of the Wide Beta, however, the feedback is more varied. The Collection, Play Lobby, and Trade were often sources of frustration, and the design team will be reevaluating how we are presenting the information in these scenes in the coming months. While some of the players' troubles in these areas are a combination of players being unfamiliar with the client and our lack of specific instruction, we really want these areas to be intuitive and easy to use from the get-go and this will be our focus as we explore design changes.

The Duel Scene received the most varied responses of all the Wide Bata feedback. Most major design features had an equal number of supporters and detractors, which means additional feedback review to tease out actionable items in these areas. Fortunately, the major areas of concern most players had regarding the battlefield, such as the ability to manipulate game zones or improving the visibility of important game information, are already issues we are aware of and have plans to address. We will also explore ways to increase the size of cards on the battlefield as much as we can, which was another major concern.

When reviewing the hundreds of responses we received, we found many were about specific design decisions that players didn't like, such as the lack of a binder view in Collection or the inability to expand their graveyards. While I won't go into specifics in this article, I want to let players know that their feedback has been heard loud and clear. We've already started discussions around ways to incorporate the most common feature requests into future design iterations.

Mentioning stability twice isn't a mistake. While it may not be exciting to hear about stability fixes, we know that program stability is paramount for players to enjoy Magic Online. At this point, we can add all the bells and whistles to the Wide Beta that we want, but if players can't use the program without it crashing or freezing those changes just aren't relevant.

As I said before, we have continued to focus on the major crashes and deadlocks (areas where the client just stops responding) since our last major update on June 5. The bulk of the fixes in Wednesday's update can be found in the Collection, Duel Scene, and Play Lobby, although we have addressed issues across all game scenes.

Beyond stability, we have continued to focus on improving the overall performance of the Wide Beta. The biggest beneficiary of this work is going to be the Collection scene. Here, we've re-factored how the filters work and added additional improvements to how cards are displayed. This results in notably faster filtering and improved card display.

Behind the scenes, we continue to refine our reporting tools to gather more information about known issues and to identify additional crashes and deadlocks. We also have added a specialized external team who is working with us to ensure the program is as stable and efficient as possible. Our goal is to ensure the Wide Beta is at least as stable as the current client before making players switch full-time.

In the short term, as boring as it may be, we will continue to focus on the fundamentals of stability and performance to make sure players don't have to worry about whether or not they will be able to finish matches on the Wide Beta before it crashes.

In addition to the stability and performance work in this update, we did make some additions to the Wide Beta. While not a feature designed for current Magic Online players, we are adding the Wide Beta version of the Free Trial with this update. The Free Trial is an important tool that lets potential players sample Magic Online and battle with a handful of premade decks without going through the full account-creation process.

The new Free Trial is streamlined when compared to the existing one and designed to get players into the action faster. Here, players just need to select a deck and hit Play. They will automatically get matched up against the next available player. This process makes it easier than ever to try out Magic Online and get a taste of the game and represents the kinds of usability changes we want to make throughout the client where possible. 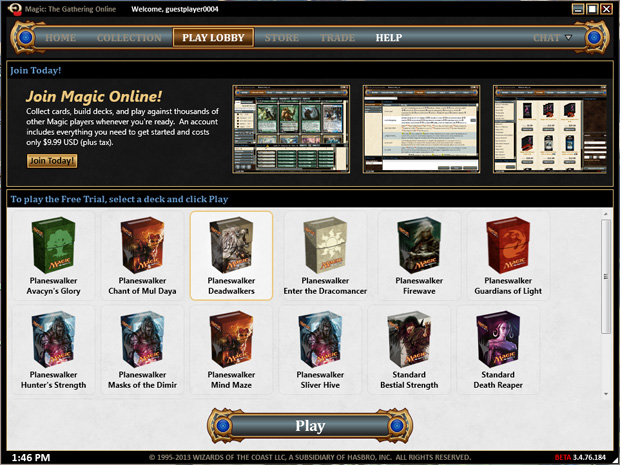 In the Duel Scene, we have continued to refine the experience by improving performance, fixing bugs, and tweaking the card display. This time around, Auras and Equipment get an update to make them behave better on the battlefield, particularly when multiple cards are attached to a permanent. We also fixed some visual issues around cards on the stack, the game zones on the right side of the battlefield, and interacting with cards in your hand. We have also adjusted the Gideon theme to be more subdued. All in all, the battlefield experience should feel and look better than it did previously. 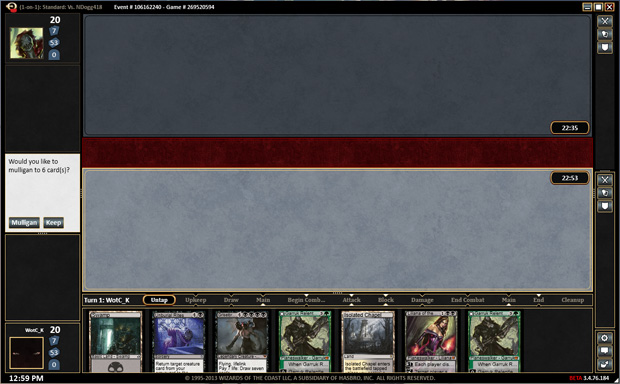 When you get beyond the battlefield, there have been many little fixes, but no major feature work. Imported and saved decklists will now prioritize versions of a card a player owns over the most recent version when appropriate. We have adjusted it so untradable cards, like Planeswalker format cards, cannot be added to a trade binder. We have also fixed the issue where context menus were missing during a trade and made some tweaks to the Store to improve the user experience.

If I haven't made it clear yet, our number-one goal moving forward is shoring up any stability issues we have and making sure players can complete a game of Magic on the Wide Beta client. While our Wide Beta adoption rates continue to climb, they are still not where we want them to be overall. As we get our crash and deadlock rates down, we will run at least one more Spotlight, likely for a longer duration than the previous one, to get the updated Wide Beta in front of even more players. 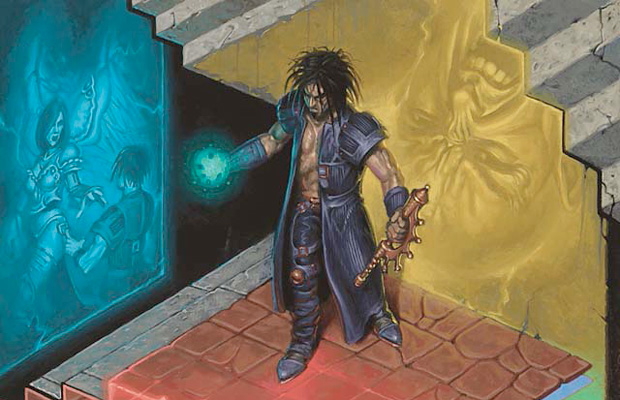 While the development team focuses on locking down stability and performance, the business and design teams will be working on prioritizing and scheduling the upcoming design work that needs to happen. The exact schedule is dependent on the results of the next Spotlight as well as when we decide to officially disable the current client and transition all players to the new version, but we will not be making any major feature changes while our stability work is still under way. We haven't locked down the date for the next Spotlight, but we will announce it as soon as we have it.

Obviously, we won't be disabling the current client in July like we had hoped; it is still important to get to a point where we can focus our development efforts on one client. Managing development for two platforms, whether card sets, features, or infrastructure, creates additional challenges across all aspects of Magic Online, including QA, development, business, and game support. Allowing the teams to focus on only one client improves overall efficiency and ensures that we can provide the best possible experience for our players.

As always, please check out the Wide Beta whenever you have a chance and feel free to fill out the feedback form whenever you want. Remember, you don't need to fill out the entire form every time you use it, just the section you want to provide feedback on. You can also drop by the forums to discuss your thoughts or hit me up on Twitter at @ckiritz.

Thanks for your continued support and have fun.